Another take on Alexa in a soundbar

Share All sharing options for: Polk Command Bar review: As seen near TV

The Polk Command Bar is about as subtle as those “As Seen on TV!” stickers slapped on products in the discount aisle at your local big box retailer. But instead of that catchy infomercial product slogan, the design of this $299 soundbar blares “Now with Alexa!” That’s because the Command Bar looks for all the world like a regular soundbar with an Echo Dot wedged into the center of it.

There are a lot of ideas for how to get smart assistants into your living room. Tech companies are throwing nearly all of them at the wall (and in the case of soundbars, that metaphor is sometimes literal) at a heady clip. Polk’s ideas for how Alexa in your living room should work are almost admirable in their bluntness: make a midrange soundbar and then Just Add Alexa.

It works, but it’s not elegant. Sort of like the gizmos you’ve seen on TV.

Our review of Command Bar 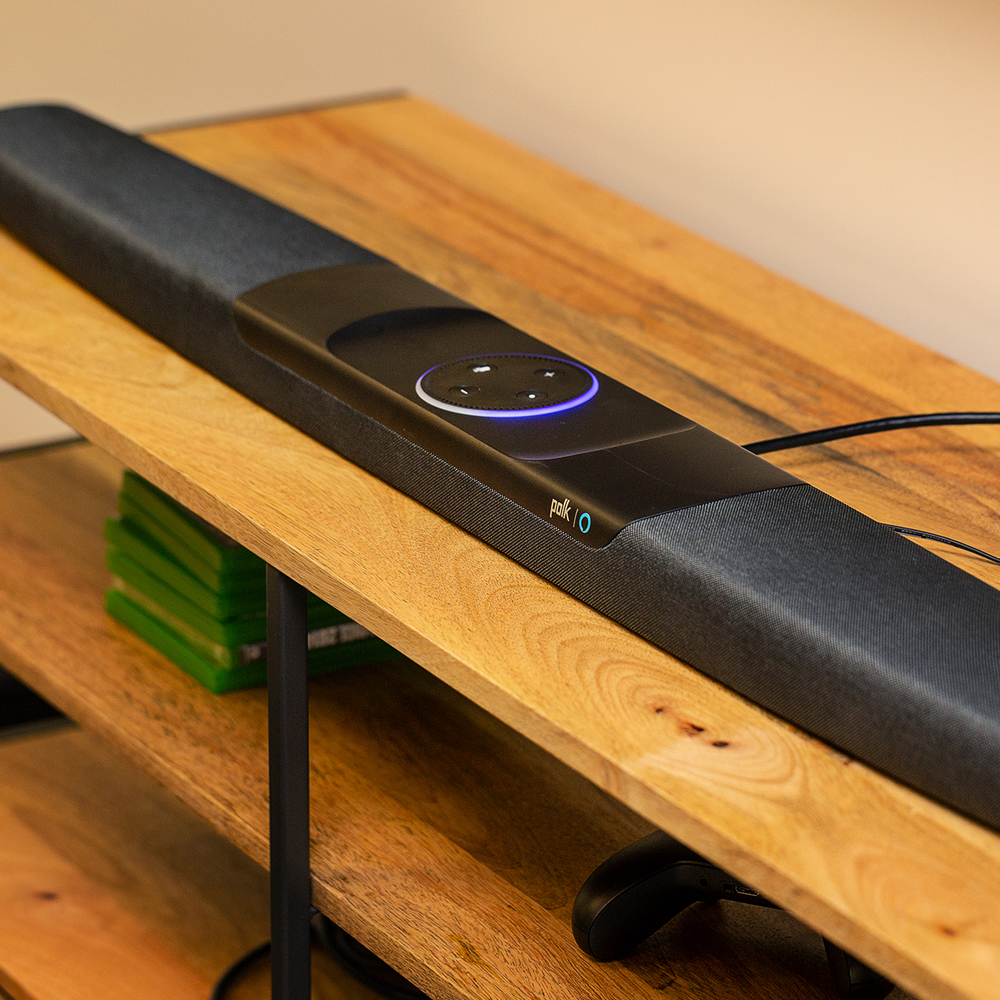 Two years ago, Polk hatched a plan to get Alexa into your living room. It was a unique plan, maybe even a reasonable plan by some lights. The plan was this: take an affordable soundbar and put a big circular divot in the middle of it where consumers could plop in their own Echo Dot.

It was a bad plan. Fortunately, Polk figured that out fairly quickly, and so its soundbar (with subwoofer) has custom electronics that run Alexa and allow it to control the soundbar’s various functions more directly.

But it still looks like a soundbar with a Dot plopped in the center of it. Polk got special dispensation from Amazon to use the Echo’s industrial design. Except for the Dot ring on the top, it looks like a nice soundbar — a black wing perched underneath your television. (You can mount it on the wall, but it’s pretty clearly meant to sit on a credenza.)

Everything about it is predicated on hitting the features that users are likely to say they want in a soundbar. It comes with a subwoofer and its own remote control. That remote control has dedicated volume buttons for both bass and voice, the two things people are most likely to want to tweak when they’re listening. It has a tiny LED smack in the middle of it that turns on whenever the soundbar is receiving audio. It reduces confusion (you always know if it’s on and working), but it’s three ticks too bright and annoying as all get out.

The sound is uninspired, but it will at least sound better than your TV’s speakers

Polk wants to minimize confusion by being predictable, but “predictable” isn’t always a positive thing. Take the sound quality. Here, again, Polk has overindexed on what it knows most people want: clear dialogue above all else. Watching TV, dialogue was indeed easy to discern — more so than even on my Sonos Playbar with its voice mode turned on. But that clarity comes at the expense of everything else. There’s no richness to the sound, it’s all very flat and uninspiring, especially with music. The included subwoofer does add more bass, but it sounded more like quasi-random thumps added to the mix rather than a cohesive, immersive experience.

The Command Bar will indeed sound better than whatever speakers are in your flat panel TV, and it can decode Dolby 5.1 and DTS (but there’s no way to build a full surround system with it). It also works with Bluetooth, if you’d prefer to use it that way. But watching Arrival, I kept on thinking “this sounds better” instead of “this sounds great.” I wasn’t able to compare it directly to the Sonos Beam (which costs $100 more), but based on previous listening I’m comfortable saying that the Beam sounds better, even though it doesn’t have as much bass.

Back to that plan that was hatched two years ago. Polk made a lot of decisions back then about the design of the Command Bar that still work today, but not quite. The Command Bar was built to work with Alexa, but it was also built to work with the Fire TV. In addition to the standard Optical audio input, it has two HDMI inputs, one HDMI output, and an always-on USB port. Like many other soundbars, the Polk can be a little HDMI switcher between video inputs and your TV.

Anyway, one of those HDMI inputs is in a cavity behind the soundbar that is custom-designed to fit a Fire TV Stick. The idea is that you can plug in a Fire TV and control it with a remote or with Alexa. It’s kind of clever. Until you realize that it was designed two years ago. So if you want to use a Fire TV 4K, that little box sticks out of the back of the Command Bar in an ugly way.

If there’s a bright spot on the Command Bar, it’s the Alexa integration. After a little bugginess with an early beta, the shipping software is great. Alexa hears me loud and clear, Spotify integration works well, and the recent Fire TV updates mean playing movies with your voice is easier now. You can even control the Command Bar’s functions directly, switching HDMI and turning the bass level up or down.

Not everything is perfect, however. Some Alexa stuff that works fine on your Echo won’t work here until Polk issues a software update, including voice calling, messaging, alternative wake words, announcements, and (critically) multi-room music. There’s an “Alexa” button on the remote that serves only to temporarily quiet the audio so the microphones on the soundbar can hear you (there’s no mic on the remote).

The Alexa integration is also a literal bright spot, since it looks exactly like an Echo Dot crammed into the top of the soundbar and therefore lights up in the same way. It also lights up whenever you change the various volume options (main, voice, and bass).

I suspect the Polk Command Bar is going to sell decently well despite its several pitfalls. It is, as I said, not subtle at all. It ticks every box most people in the market for a soundbar are looking for with a neon blue Sharpie: HDMI inputs, subwoofer, Alexa, and a price point that’s $100 cheaper than its nearest competition. As it populates the shelves of Best Buy and the promoted section of Amazon, I’m sure lots people will buy it and be happy enough with it — unbothered by the bright lights, middling sound, and extra remote.