Share All sharing options for: Audio-Technica R70x review: the definition of neutral headphones

Japan’s Audio-Technica thinks of itself as a producer of professional audio equipment that just happens to also do some consumer-grade stuff. Its best-selling and most widely known pair of headphones, the M50x, fit that image perfectly: designed for professional use, but embraced by the wider public. They’ve grown popular almost by accident, benefiting from word of mouth recommendations and a consensus endorsement among YouTube video producers. Only thing is, the M50x aren’t Audio-Technica’s best pair of headphones for the pros. Nor are they my favorite pair from the company. Both of those prizes go to the Audio-Technica R70x.

The $349 R70x have been on the market for a couple of years now, but Audio-Technica has put zero effort toward marketing them. You’ll know why that is the moment you first listen to them, because their sound is worlds away from the popular Beats tuning of exaggerated bass and excitement. If Beats are the Michael Bay of headphones, the Audio-Technica R70x are the geeky documentarian fastidiously recreating events exactly as they were recorded. This uncolored sound is comparatively less emotional, and I’ve previously written about how ill-suited it is for entertaining casual listeners, but the R70x somehow defy old preconceptions. They’re neutral and detailed enough to be used for serious studio work, and yet pleasant and fun enough to also charm amateur ears.

Our review of Audio-Technica R70x 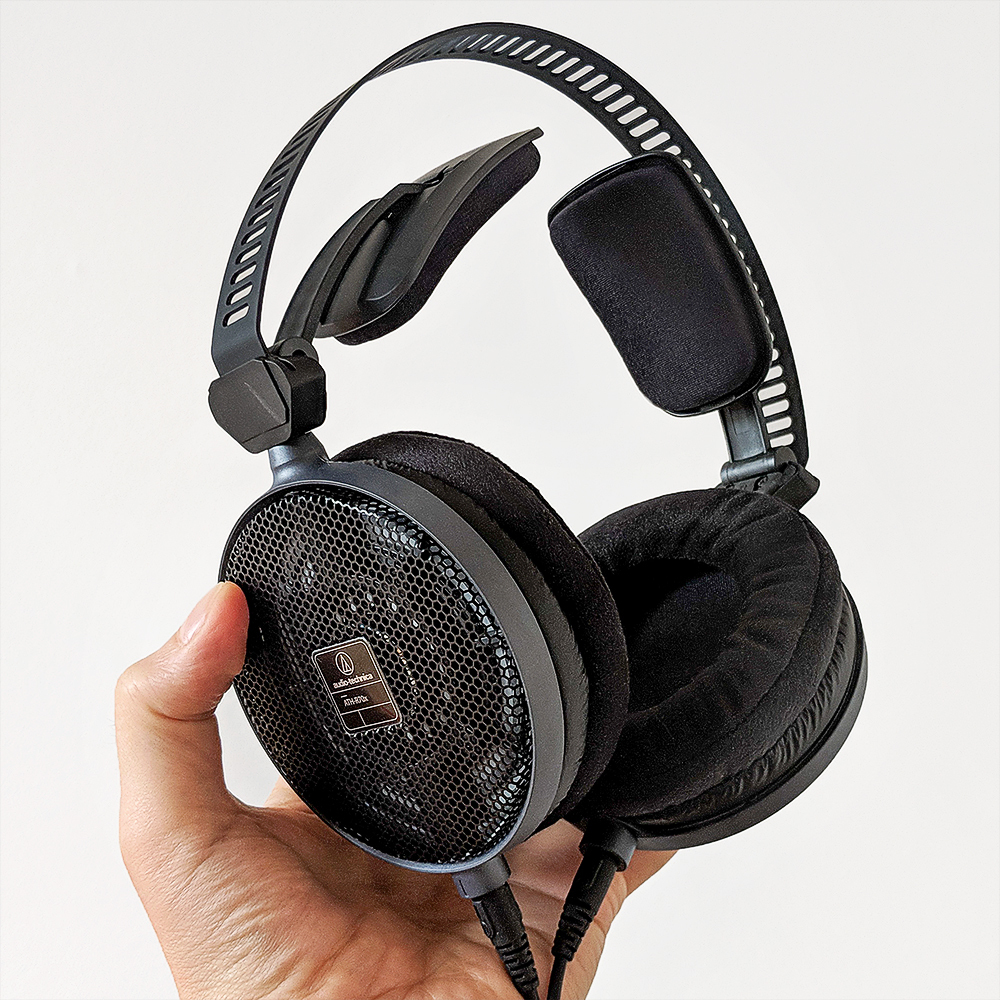 Anytime neutral sound and a sub-$400 price figure in the same discussion, headphone enthusiasts will instinctively point you toward Sennheiser’s long-tenured and universally respected HD 600. It’s no overstatement to say that the R70x are basically Audio-Technica endeavoring to build its own version of the 600s. When I spoke with engineers inside the Japanese company, one of them cited the Sennheiser HD 650 — a close sibling of the 600 — as his all-time favorite headphones, and it was apparent that Audio-Technica measures itself against its bigger German rival.

Like Sennheiser’s HD 600 and 650, the Audio-Technica R70x have a thin metal mesh on the outside of each ear cup, a plush pad on the interior, and a stripped-down, industrial-looking construction. I’ve always found the performance-to-size ratio of Sennheiser’s 600 series impressive, but Audio-Technica takes it up a notch with even smaller, even lighter headphones that sound (spoiler alert) better. Weighing 210 grams (7.4oz) without the cable attached, the R70x are some of the lightest over-ear headphones you can buy, whether for serious or casual listening. Another great trait of the Sennheisers that Audio-Technica has recreated with the R70x is how discreet the headphones look when worn: their ear cups don’t stick out to give you that Princess Leia look and their headband practically disappears from view. At a minimum, they’re classy; I’d call them handsome.

My review pair of the Audio-Technica R70x carry a “Japan” insignia on the left side of their headband, to signify they were made in the company’s home country. Other units, however, have been made in Taiwan, and signed accordingly, which may or may not have an effect on their quality of manufacture and durability.

The perforated cup design means that the R70x are acoustically transparent, which is to say you’ll hear things outside them almost as easily as you would when you’re not wearing the headphones. And people in the same room will hear whatever you’re listening to as well. That’s the price you pay with open-back headphones, but I always think it’s worth it when such a pair exhibits sound you just can’t get with in-ear or closed-back over-ear headphones, and that’s what the R70x do.

Before I get into the sonic qualities of these headphones, though, it’s worth addressing their ergonomics more closely. The extra light weight of the R70x really makes a difference in how comfortable they are over longer listens, and I’ve been able to use them for hours at a time forgetting they’re on my head. Audio-Technica uses some fancy composite materials to provide strength and stability in spite of the lightness, and I found no creaks or weak points in the R70x. The provided cable is super long at approximately 3 meters in length (studio use, remember), and it attaches to the headphones via a proprietary locking mechanism.

The biggest issue I can foresee anyone having is with the small-ish size of the R70x ear pads. I have relatively large ears and the pads touch both the top and bottom of my ear, which isn’t immediately comfortable. After a while, the sense of contact fades and I get on with my music listening, but that might be more problematic for others. The odd-looking wing pads that replace the traditional padded headband on these headphones work very well, and the overall clamping force is perfect for keeping them securely on my head without creating any sense of undue pressure.

The sound of the Audio-Technica R70x came as a shock even to me, an avowed audiophile. I review plenty of headphones costing north of $1,000, and the consistent thing with them, just as with those costing $100 or less, is that they’re trying to impress the listener. Cheap headphones fake it, expensive headphones actually have advanced materials like beryllium to flex real muscles, but in all cases you can detect some preening on the part of the manufacturer. Studio headphones are supposed to be exactly the opposite, and I find the R70x embody that spirit to the fullest. Like their home country, the R70x make a virtue of self-effacement.

Sitting down and waiting to be wowed by the R70x is the wrong move. I know because I’ve tried it. I can’t point to any particular thing that these headphones do that gives me goosebumps or the impulse to get up and start dancing. But it’s when I leave them on and put my focus elsewhere that I truly appreciate them. The music’s own, natural flourishes start to come through and just tickle (instead of bludgeoning) my pleasure receptors.

This true-to-life quality of the R70x takes some time to get accustomed to, but eventually it becomes a little addictive. I’m especially fond of how natural voices sound through these headphones, something that even grandiose planar magnetic monsters like the $3,799 Final D8000 can’t improve on. But I also don’t think that Audio-Technica has played it absolutely straight and neutral: there’s still just enough of a hint of warmth in the bass department to keep a basshead like me interested. That’s really where the R70x surpass the HD 600: Audio-Technica’s headphones have deeper bass extension and their sound comes across with more impact and conviction.

Where the weaknesses of the R70x arise, they can only be detected by comparison to pricier headphones. The soundstage, for instance, is not particularly wide or enveloping — that’s one of the strengths of the luxury segment of the headphones market. Absolute detail extraction is also less than you’d get from the aforementioned D8000 or Sennheiser’s HD 800 S, while Focal’s Clear and MrSpeakers’ Aeon Flow Open both offer a smoother, more refined sound. The R70x’s treble never offends the ear, though it might not be quite as perfectly balanced as the bass and mid-range response of these headphones. In any case, at their $349 price point, these headphones are tough to beat.

An important feature that the Audio-Technica R70x share with more expensive headphones is the demand for power. These headphones have an impedance of 470 Ohm, an order of magnitude higher than your typical headphones, which means I’m pushing the conventional headphone amplifier in my laptop to its limit and even the DragonFly Red feels a bit anemic powering them. They still sound great plugged into the Huawei MateBook X Pro (at 100 percent volume), but to experience them at their best, you’ll want a dedicated amplifier. That being said, a pair of R70x and a really good amp like the $399 Schiit Jotunheim still cost less than many fancied-up headphones that don’t sound nearly as good.

A good deal of my enthusiasm for the R70x stems from how unbelievably light they are. I know I can’t take them on my work commute or to the gym, but I also appreciate their understated appearance. There’s nothing inherently appealing about headphones the size and weight of VR headsets, and Audio-Technica deserves praise for shrinking the performance of the R70x down to the size that it has. The best headphones are the ones you reach for most often, and the R70x have quickly become my second favorite after the AirPods, which excel in the same parameters of lightness and ease of extended use.

The “R” in R70x stands for “reference,” which is a term I’ve heard abused so many times in relation to headphones that I’ve quit using it. But Audio-Technica has built something arguably better: enjoyable reference headphones. If you want to know what your music truly sounds like, and you don’t have four figures to indulge that curiosity, these nominally pro headphones are worth your consideration.