Equal parts functional and fancy, this desktop ornament can power almost any pair of headphones

The surest mark of your descent down the audiophile rabbit hole is the first time you start to seriously consider buying a dedicated headphone amplifier. It’s like a photography enthusiast looking into full-frame camera bodies: an inevitable feature of the pursuit for the best-possible quality. As you ascend the price categories, however, you might struggle to justify a luxuriating expense like a headphone amp to people of a less audiophile persuasion. The solution? An amplifier that looks as beautiful as it sounds.

The $999 Woo Audio WA7 is probably the prettiest piece of audiophile gear you can buy without having to remortgage your home. It uses vacuum tubes for its amplification and also has a built-in ESS Sabre DAC (digital-to-analog converter), so all you need is a USB cable to plug in your Mac, Windows PC, Android, or iOS device. It handles all the audio processing for you, and you can plug in anything from the highest-sensitivity in-ear monitors via the 3.5mm jack to extremely power-hungry over-ear cans via the 6.35mm port. 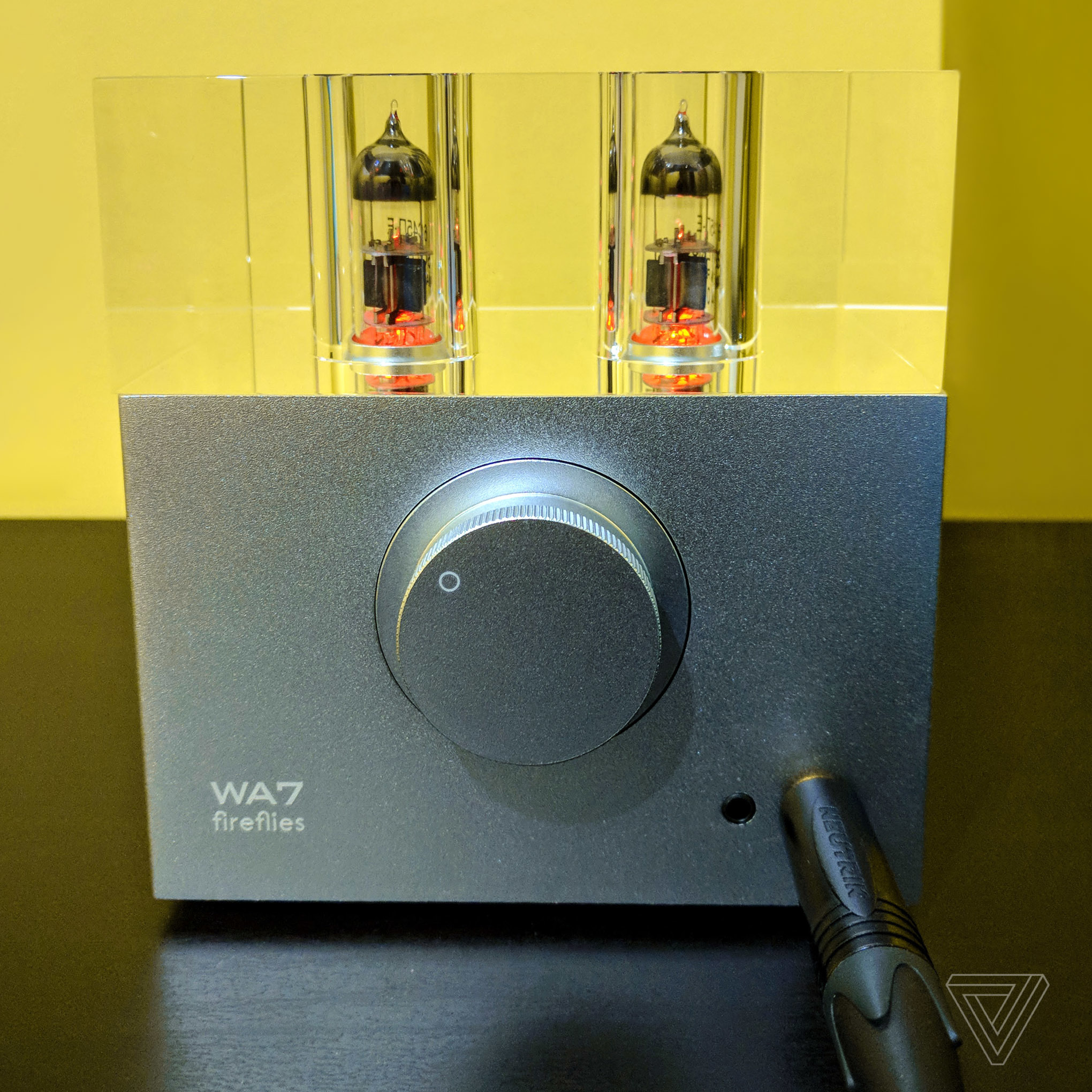 Now in its second hardware revision, the WA7 has been around since 2013, but in all that time, none of Woo Audio’s competitors have been able to craft anything nearly as elegant. This cube-shaped amp really stands on its own, and its timeless appearance would fit into any era of technology. Woo’s sleight of hand with the design has been to put all the ugly stuff into a separate, rather enormous power supply brick and leave only the pretty bits for the metal-and-glass cube you put on your desk. It’s a smart and efficient design.

The review unit that Woo shipped to me was tightly and securely packed. Clear instructions guided me through the assembly process, which was basically just unpacking the two Russian-made vacuum tubes, seating them in their silos, and placing the solid glass frame around them. Job done. Hooking up to my Mac was also utterly painless. Some of the other DACs I’ve used have required me to manually select them as the audio output every time I use them, but the WA7 takes over output automatically when it’s turned on and relinquishes it when off.

The overwhelmingly positive first impression of the WA7 is a mix of that effortless setup and the quality of its components. The anodized aluminum base feels reassuringly heavy, and it has a seamless unibody look that makes it a perfect match to Apple’s MacBook Pros. The glass module is also heavy, with anti-slip pads thoughtfully provided to keep it in place.

Once you turn on this amp, you understand why its full name is WA7 Fireflies, as a pair of amber LEDs turn on beneath the tubes and illuminate the whole unit. This creates a fantastic sight at night, with the corners of the glass refracting and scattering that light. I’ve had this amp since the cold months of winter, and its subtle warm glow has been like a mini fireplace perched atop my desktop. Two issues do arise with these lights, however: one is that you have no option to turn the LEDs off, so you’d better like their look, and the other is that many users have reported at least one of their LEDs failing. This happened to my review unit, with the left light going out permanently. It hasn’t harmed the sound of the device, but it presents a cause for worry about quality control, nonetheless.

There’s a scant amount of physical complications to this little box, with just two switches on the back: one for power and the other to toggle between low- and high-impedance modes. The latter of the two is designed to handle headphones that are harder to drive, like Sennheiser’s HD 800 S or the 470-Ohm Audio-Technica R70x that I just reviewed. The WA7 does a great job with both of them, never leaving me wanting more juice. You’d have to go to absolute extremes, such as Hifiman’s $6,000 Susvara planar magnetic headphones, to find a pair of cans that would feel inadequately powered by this amp. Among the headphones I tested with the WA7 were Focal’s Utopia and Clear, MrSpeakers’ Aeon Flow and Ether Flow, Audeze’s MX4, LCD-X, and LCD-2 Classic, Grado’s PS2000e, and Audio-Technica’s flagship X5000. None felt constrained by the amplifier.

The only things on the front of the WA7 are the headphone outputs and the volume knob. It’s a really simple, functional setup. The knob rotation has a good amount of friction to it, making for a satisfying tactile feel, though the volume marker isn’t easily identifiable in the dark. My favorite volume knob on any headphone amp so far is the one dominating the front of Astell & Kern’s Acro L1000, and the WA7, while good, isn’t quite in the same league of knurled pleasure.

So how does the Woo Audio WA7 actually sound? Well, it sounds anonymous. This is a good thing when it comes to audio equipment, which you want to feel transparent, letting the quality of the music pass through it with as little alteration as possible. The ESS Sabre DAC that Woo uses is a popular choice among portable music players and other DAC/amp combo units, so it’s little surprise that the WA7’s sound would end up feeling indistinguishable from other high-end audio gear. When I listen to music, movies, or anything else through this amp, it’s down to the headphones and the audio recording itself to excite or impress me. To my mind, that’s a headphone amplifier doing its job well.

The strength of Woo’s implementation is in the way it’s segregated out all the parts that could potentially cause electrical interference into the big power brick, resulting in a pristine sound output. One thing that always impresses me about the WA7 is its total silence when not playing back any music. Plug your headphones into your laptop or PC, and you might notice a subtle electrical hum; that noise is completely absent from the WA7, no matter the volume it’s set to or the sensitivity of your headphones. That also makes this amp nicely compatible with in-ear headphones, especially ones using multiple balanced armature drivers, which can often be overwhelmed by conventional desktop amps. With the versatility to go from tiny in-ears to massive over-ear behemoths, this amp should play nice with just about any pair of wired headphones you care to throw at it.

So look, the Woo Audio WA7 won’t change your life. It won’t make bad headphones sound good. But it will make your desktop look like a much classier place, it will make volume adjustments feel so much nicer than plinking a keyboard key, and it will raise the ceiling of the audio quality you’ll be able to get from your home audio setup. The $999 asking price definitely carries a premium for the handsome, streamlined looks, and I’m not about to suggest that this is the best-value amp you can buy. But that’s the beauty of a diverse market: if you want purely utilitarian equipment, look elsewhere; if you want something that looks fabulous while being highly functional, the WA7 is a good candidate for your attention.

Update, 8:45PM, July 9th: Woo Audio says it has identified the problem causing LED lights to malfunction, and all new units of the WA7 are free from the fault I experienced. The company also promises to repair any failed LEDs free of charge, no matter the warranty status of the unit.