Are 17-inch laptops worth the compromise?

There are some advantages to a 17-inch laptop

Share All sharing options for: Are 17-inch laptops worth the compromise?

The trend for gaming laptops this year is all about being thinner and lighter. It’s now possible to buy a fully capable gaming rig that’s less than an inch thick and weighs under five pounds. The Asus Chimera G703GI is not one of those laptops. It’s a 10-pound monster with a 17-inch screen and a frame that’s twice as thick as Razer’s new Blade or the MSI GS65.

The Chimera feels like a relic of a bygone age when the only way to get a capable gaming laptop was to put up with a lot of weight and giant proportions. But it’s not alone. There are still a lot of 17-inch gaming laptops available at a variety of price points. The Chimera is at the top of the pile, and it has a deep bench of specs and a sky-high price tag to match.

But if it isn’t portable or upgradeable, then what’s the point?

Our review of Asus Chimera G703GI 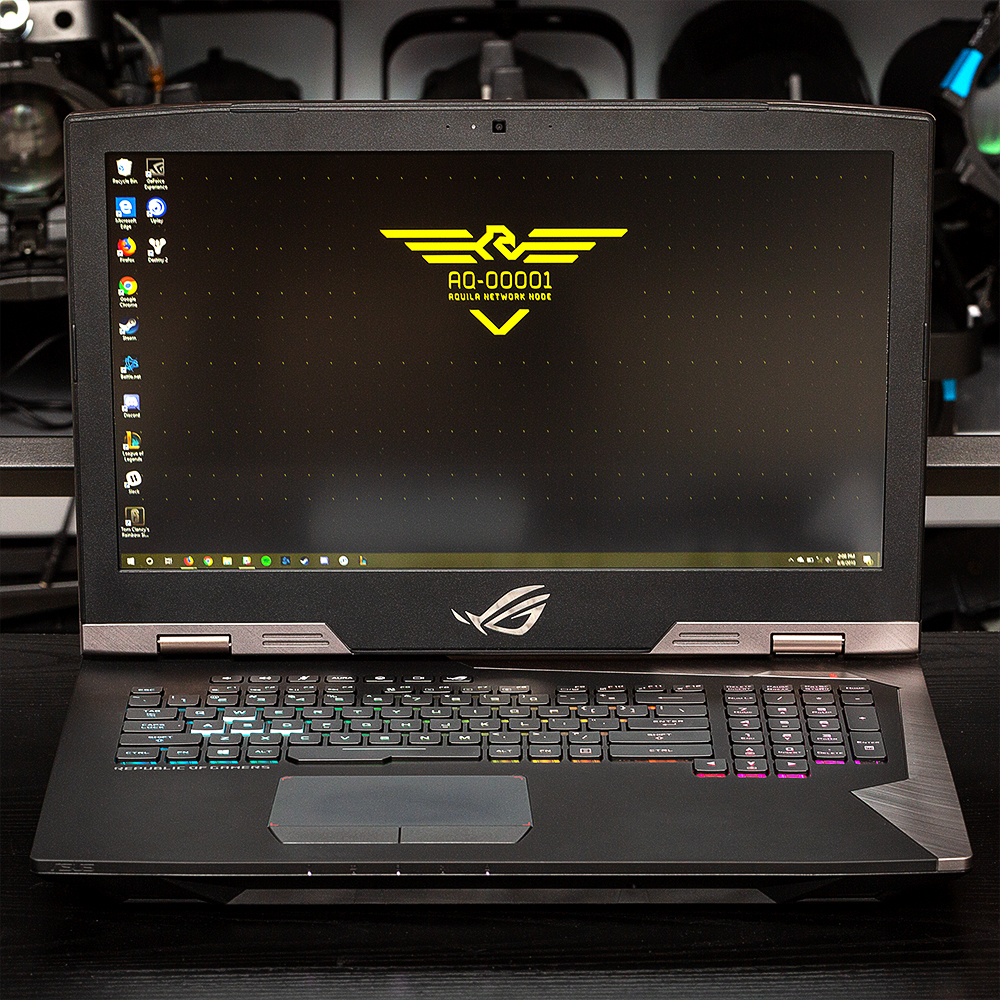 It’s established that the Chimera is the definition of overkill. It has the performance of a desktop without the option to upgrade the GPU or CPU; only RAM and storage can be swapped.

That’s a lot of specs, but it’s not very different from what you can get in a desktop PC for a lot less money. You can also upgrade your PC more often than you can a laptop, even though this laptop will probably never leave the desk it’s placed on.

There are still advantages to having a 17-inch laptop. Compared to more portable gaming laptops, the major thing the Chimera brings is its Core i9 processor and 17.3-inch screen; no Max Q laptop on the market has either spec available.

Not only do you get additional screen real estate (and you still have that fast 144Hz refresh rate gamers crave), but there’s more room in the chassis for efficient cooling to keep internal parts safe and running longer.

Its gargantuan frame gives it presence

The sheer footprint of it on a desk also means sitting down in front of the Chimera feels like you’re at the center of a complete gaming workstation. Furthermore, you have such a high level of processing power that it just can’t be squeezed into a laptop that weighs half as much with power requirements for more than only one charging brick (instead of two) for power to function.

You can use the Chimera with up to eight Xbox controllers

Another advantage of a 17-inch laptop is the room to squeeze in other features, like an Xbox Wireless controller receiver. The dedicated Xbox button brings up the Windows Game Bar and Xbox app so you can wirelessly connect up to eight Xbox controllers.

On the flip side, a 17-inch laptop doesn’t provide more ports or an exceptionally better keyboard or screen than a smaller laptop. The Chimera can output at 4K or 2K resolutions for up to three monitors, but so can the Razer Blade 15 and a handful of other laptops.

With a spec sheet like the Asus Chimera’s, there should be no doubt that it could handle any creative or resource-intensive task you throw at it. Sound mixing is possible with the dedicated mic and audio ports. There’s also an SD card slot, so it’s great as a batch editing workstation for Photoshop or Lightroom. But gaming is where the Chimera does its best work.

In Rainbow Six: Siege, the Chimera handled the game at ultra settings with supersampling, but still maintained 150 fps in lively multiplayer battles. Games like Fortnite, League of Legends, Destiny 2, and Monster Hunter: World will run at ultra settings at around 100 fps. Max Q gaming laptops like the Razer Blade 15 can hit triple digits and reach the 144 fps target as well, but not as consistently as the Chimera can.

All of the processor-intensive applications the Chimera easily runs require a lot of cooling, especially with a Core i9 with turbo speeds up to 4.8GHz. You can use three fan modes (silent, balanced, and fan overboost), which are great for controlling the rush of air from the fans that you’ll hear when it does heavy lifting.

Silent mode does an excellent job of keeping the Chimera suitable for work in an office, for example, but it still gets loud when you’re running games or multiple monitors.

Comfortable keys, thanks to a massive chassis

The Chimera doesn’t have a mechanical keyboard, which is a disappointing omission from a machine this extravagant. Instead, the full-size keyboard has fully backlit RGB keys with 2.5mm travel, but they’re still comfortable and they have the tactile feedback I like when typing long documents or rapidly hitting your QWERTY keys in a League game. Asus has the vertical height to use this kind of keyboard, which is another advantage gained by having a roomy 17-inch chassis.

A nonslip grip texture runs across the palm rest, making it prone to oily fingerprints but comfortable to the touch when used for long sessions. The precision touchpad tracks smoothly enough to easily navigate between browser tabs or doing some light photo editing.

One interesting placement on the Chimera is the speakers, which are inside the lid right underneath the screen. The loud and bass-rich speakers are better than a smaller laptop’s, including the Razer Blade 15. It doesn’t suffer from distortion at loud volumes, so you can use them for playing games alone in a room or entertaining a few people with music. They’re not detail-oriented like headphones or external speakers, but they are some of the best laptop speakers.

As for the Chimera’s battery, it’s really just a formality to call this behemoth a laptop. It lasts just long enough for you to find the two 280-watt chargers that are needed to power it.

The Chimera is the pinnacle of 17-inch laptops

In the end, the 17-inch laptop has become a canvas for the extreme in today’s market. Of those laptops, the Asus Chimera G703GI is the most boastful and excessive machine you could possibly spend $4,999 on. But it also raises a fine point for those of you who don’t have room for a full desktop setup, monitor, keyboard, PC case, and more. The Chimera can become that all-in-one solution with power similar to that of a desktop’s.

Of course, having tons of available power doesn’t excuse the inconvenience of having to carry around a 10-pound laptop with two chargers, but the Asus Chimera proves there are still perks to having a desktop replacement in 2018.

Nintendo made a colorful Switch OLED covered in Splatoon 3 ink