PC gaming is the hardest gaming ecosystem to join since a decent gaming PC, be it a desktop or laptop, can easily run for $2,000 or more. But the Acer Predator Helios 300 laptop disrupts that trend: this $1,199 laptop is fully capable of high-end gaming and VR. If you’re in the market for a gaming laptop but you have a limited budget, you should be excited because, until now, your options have been far more limited.

While it seems like the Helios 300 is a too-good-to-be-true laptop, it does come with some caveats, namely in design and keyboard quality. But even with those compromises, the Helios 300 is a precursor of a trend in cheaper but still-capable gaming laptops.

Our review of Acer Predator Helios 300 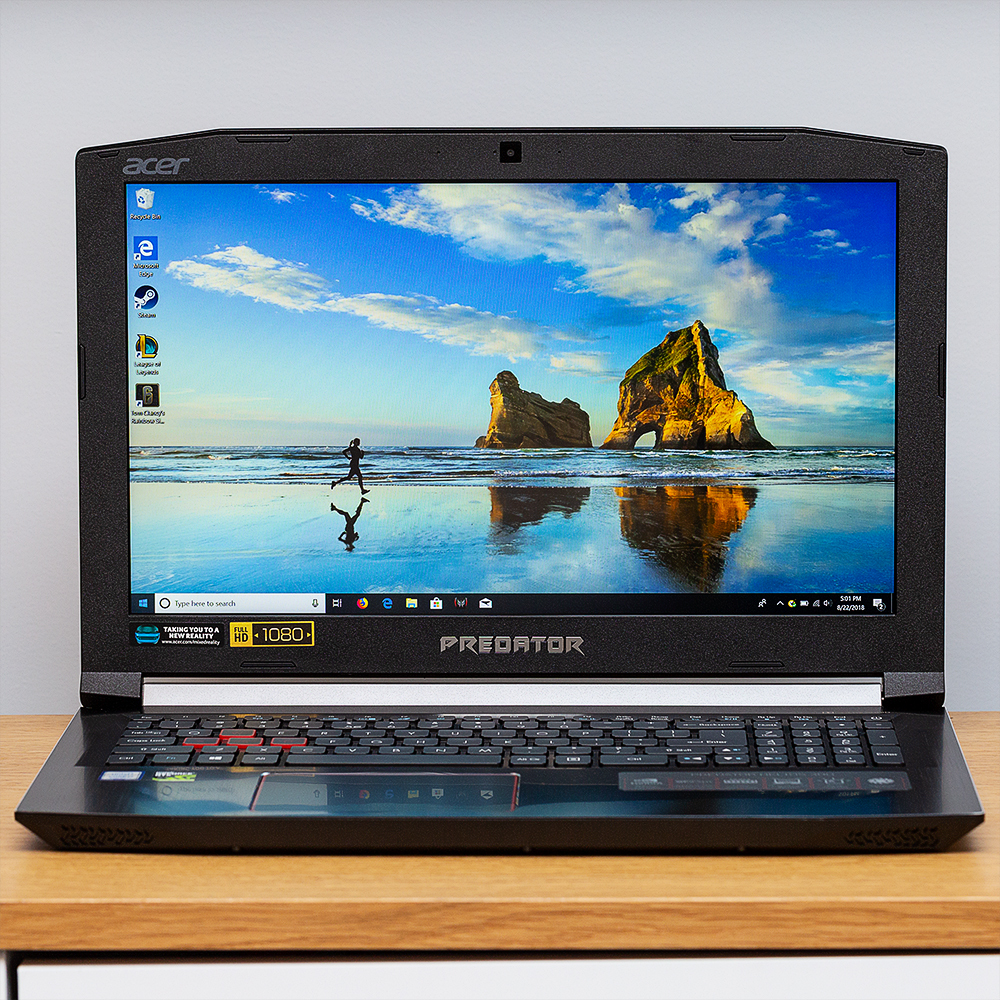 At the very least, I can say Acer designed a gaming laptop that looks the part: bright red accents, chunky corners, and thick bezels with plastic and metal that equal six pounds in weight. The Helios 300’s 1.05-inch chassis isn’t the thinnest, and it doesn’t have the highest quality build I’ve seen in a laptop for this price, but it does well to mask most of my fingerprints, despite its dark metal palm rest.

The Helios 300 reminds me of gaming laptops from two years ago when tasteful styling was unheard of and a gaming laptop that could double as a productivity machine was equally unheard of. I cannot say this design language has aged well — it hasn’t — but the real worth of the Helios 300 is in how well it can play games.

A “gaming” laptop, no matter its price, should be able to deliver high-end performance through a decent GPU and CPU and have the bare essentials to take advantage of that performance, such as a high refresh rate screen and reliable cooling. To this point, the Acer Helios 300 delivers a little bit of everything and then some.

The first spec an affordable gaming laptop should focus on is a good screen. Acer used a 144Hz IPS screen on the Helios 300. High refresh rate screens are important in PC gaming because the higher the rate, the smoother your gameplay experience will be. 144Hz is the current standard for high-end desktops and laptops, and it’s a welcome addition to a $1,200 laptop, which are usually equipped with slower, 60Hz screens.

There’s a lot I can say about the Helios 300’s gaming and productivity performance. Prior to the Helios 300, I haven’t tested a sub-$2,000 laptop that can play Rainbow Six: Siege and League of Legends, at a consistent 144 frames per second. Overwatch also runs at ultra settings, but it dips to the 80 fps mark in intense firefights. Destiny 2 also runs comfortably at around 100 fps with settings on ultra.

The gist of it is that you’ll be able to play most current-generation PC games on high (or the highest) settings, well past the 60 fps mark needed for smooth gameplay, and sometimes you’ll even reach the native 144 fps target.

Its performance is nothing short of solid

Compared to pricier gaming laptops, the Helios 300 actually fares pretty well. The $2,399 Razer Blade 15 that I reviewed in June got similar frame rates playing the same games. Most other high-end gaming laptops, like the MSI GS65, operate in the same ballpark, with the only major differences between them and the Helios 300 being the thinner and lighter frames.

Because of its chunky profile, cooling is something the Helios 300 excels at — as any gaming laptop should — despite only having one open vent at the back. If thinness in gaming laptops is correlated with an increase in price (due to unique cooling solutions, Max Q GPUs, etc.), then I’d welcome a wave of cheaper, chunkier, but still svelte laptops, like the Helios 300. Under strain, the hottest areas of the Helios 300 include right above the function keys and the fan vents. The rest of the Helios 300 remains cool, which isn’t always the case with more expensive gaming laptops. (I’m looking at you, Razer.)

Here’s another surprise feature you wouldn’t expect on a budget gaming laptop: the ability to overclock the GTX 1060 to boost its performance. Within the PredatorSense app, you can control the Helios 300’s fan modes (auto, max, or a custom speed) as well as overclocking the GPU’s clock speed (when plugged in). Pushing the GPU to max overclock got me anywhere between 10-15 fps boost in the games that I tested.

The Helios 300 has a decent port selection, but it strangely omits a DisplayPort entirely. Obviously, you have to sacrifice some features for an affordable price, and being able to connect the Helios 300 to multiple monitors via DisplayPort is one of those axed features. Otherwise, you get one USB 3.0, two USB 2.0, an HDMI, Ethernet, and a USB 3.1 Gen 1 (but not Thunderbolt 3) Type-C port.

The keyboard and touchpad are definitely low points

At this point, it’s clear Acer accomplished a lot of the things that would make more affordable gaming laptops great. Where Acer hasn’t done such a good job is with the keyboard. I’m much happier typing on my desktop mechanical keyboard, or even the oddly configured Razer Blade 15, than the Helios’ mushy keyboard. Acer went with an all-red backlight for the keys, which are shallow, soft, and don’t feel very tactile.

The layout is fine for a 15.6-inch chassis, but typing out long documents and emails is my least favorite thing about using the Helios 300. Hopefully, competing (affordable) gaming laptops will do a better job with the keyboard.

The touchpad isn’t something to get excited about, either. The best part about it is that it’s a Precision touchpad, so tracking is reliable and smooth and all of Windows 10’s multifinger gestures are supported. However, the touchpad feels very one-dimensional when clicked, it flexes at every corner, and it shares the same slick texture as the metal palm rest.

The battery life is not great

By now, you might be wondering how the battery life of a chunky, six-pound laptop fares with a discrete GPU and a six-core processor. Not well, I’m afraid: Acer advertises around seven hours of usage on the Helios 300, but using it conservatively with the brightness turned down and keyboard backlit on, I could only squeeze out around five hours of usage of standard, non-gaming productivity work.

Honestly, I didn’t expect the Helios 300 to do well with battery life anyway. However, most high-end gaming laptops rarely reach more than six hours away from an outlet, so the Helios isn’t too far off from them.

The Acer Predator Helios 300 is an exercise in frugality without too much compromise. It doesn’t have the longest-lasting battery, the most appealing design, or the best keyboard. While these shortcomings might be deal-breakers for the kind of enthusiast who wants a do-it-all laptop, it’s perfectly fine for the beginning PC gamer.

The Helios 300 excels at gaming performance for hundreds less than the laptops MSi, Asus, or Razer have on the market. After all, $1,200 isn’t exactly cheap — that’s about what you’ll pay for a premium productivity laptop — but prior to this, you had to pay a lot more to get this kind of performance. You’ll be able to play all the games you want, with high settings, and your eyes will be able to keep up with all that action on the 144Hz screen. Acer won’t be the only player in this space for long. It’s entirely likely that Asus, MSi, Alienware, and others will have similarly priced and specced laptops out before long.

Just make sure to always bring the charging brick with you, because the Helios 300 isn’t a $2,000 road warrior. It’s an affordable gaming laptop — and a damn good one at that.

What to watch this weekend (if you like Pokémon)

Asus recalls 10,000 Z690 Hero motherboards because of a backward capacitor

Sega reveals every game coming to the Genesis Mini 2, including the controversial Night Trap