The GLAS smart thermostat is missing some key features

Share All sharing options for: The Cortana-powered GLAS thermostat isn’t as smart as it looks

You probably haven’t considered how your thermostat looks. Even if you have a modern smart thermostat, it probably looks more like a forgettable appliance than something you would enjoy gazing upon.

The GLAS smart thermostat, built by Johnson Controls, is different. This $319 thermostat actually looks — dare I say — attractive and unlike any other thermostat you’ve probably seen before. Its 5.9-inch, translucent OLED touchscreen virtually disappears when it’s idle, but it provides more information about your home’s climate than a Nest or Ecobee. Also, it looks damn cool.

The GLAS is also one of the first connected appliances to have Microsoft’s Cortana voice assistant built right in. Like the Ecobee 4, which is an Amazon Alexa speaker, the GLAS lets you bark commands at it from across the room to adjust the temperature, control other smart home gadgets, or ask for snippets of information, like weather or news. The GLAS also supports control via Alexa and Google Assistant, but for those, you’ll need to use an Echo device or a Google Home to control the GLAS. Cortana is the only assistant on board the device.

Unfortunately, the GLAS is not as good or complete as the competition. It does basic smart thermostat things, and it has the unique ability to measure the air quality in your home, but it falls short in other areas, like determining when you’re home or away and the app experience.

Basically, you have to really like the looks of the GLAS to justify its price over a Nest or Ecobee.

Our review of Johnson Controls GLAS 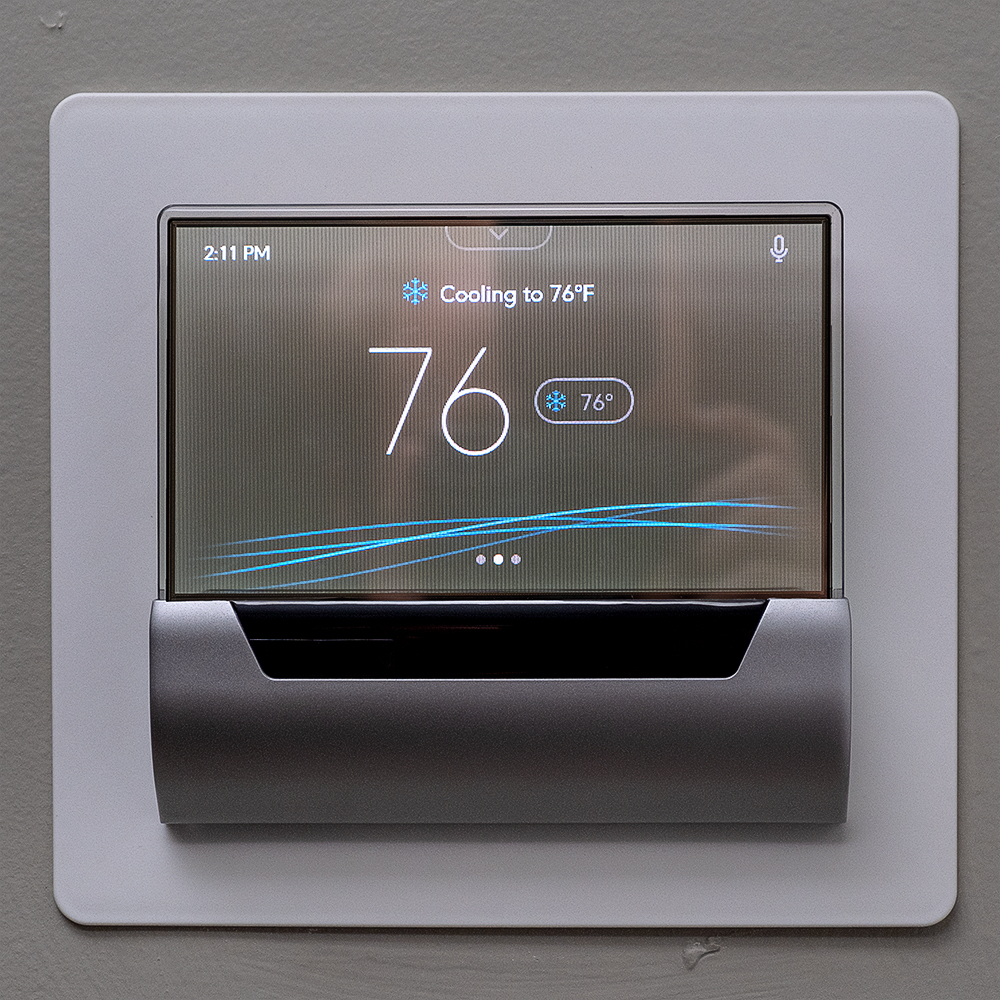 Installing the GLAS is similar to installing other smart thermostats, and your mileage may vary depending on what HVAC systems are already in your home. If you have a simple, single-stage heating and cooling system like I do, the installation is just a matter of mounting the GLAS and plugging the wires in. The system will do an auto-scan to see what type of system you have during setup, and you can correct it if there are any errors. (I had to inform the GLAS of two specific wires that it did not auto-detect on my system.)

Mounting the GLAS does require more work than other thermostats. Because the wires are connected at the bottom of the unit and not in the middle like most other thermostats, you’ll have to do more drywall patching and painting to cover up the installation holes from prior thermostats. The GLAS does come with a large backplate that covers up the marks from older thermostats well, and I used it while testing because I hate doing painting and drywall work. But if you really want to take advantage of the seamless look of the GLAS, installing it without the backplate is the way to do it. I wish Johnson Controls had included a built-in level in the mounting hardware, like Nest and Ecobee do, as it would have made installation that much quicker and easier.

The translucent OLED touchscreen is the defining feature of the GLAS, and it’s very well-executed. Though it has a far lower resolution than a smartphone (it’s just 480 x 272 pixels), it’s bright and easy to read. It also, surprisingly, doesn’t get covered in fingerprints when you use it.

The downside of the GLAS display is that it turns off quickly and doesn’t turn back on unless you’re right in front of it. Unlike the Ecobee or the Nest, both of which have always-on display features, you can’t read the GLAS from across the room or even from just a couple feet away. That has proved to be annoying in my home because the location of my thermostat is in an upstairs hallway that’s visible from downstairs. I’m able to see the display on either the Ecobee 4 or the Nest Thermostat from downstairs, but the GLAS requires me to walk up the stairs to see what the current temperature settings are.

The GLAS has sensors on its front to measure temperature, air quality, and whether or not you’re home. But unlike Nest or Ecobee, it doesn’t support remote sensors, so it can only measure the temperature in one location. That makes it difficult to balance the system in homes that have hotter or colder areas in them. It also means the GLAS has only one point of reference for activity in the home, and if you don’t move in front of the thermostat for a period of time, it will aggressively set itself to its efficient away mode. In the week and a half I’ve been testing the GLAS in my home, it has thought nobody was home and turned off the air conditioning on multiple occasions, even though people were home in other parts of the house each time.

Like the Nest and Ecobee, you can tell the GLAS when you wake up, when you go to bed, and specific times for when you might be away at work or school. But it doesn’t do a good job of learning your patterns automatically, and it doesn’t seem to adjust itself based on manual temperature adjustments I made after the initial programming. It just doesn’t seem much smarter than a standard programmable thermostat.

Its ability to measure indoor air quality is unique, however. Its sensors can assess the level of volatile organic compounds (VOCs) and carbon dioxide in the air, in addition to standard humidity. The GLAS then assigns a score to your home’s air quality based on those three factors. If the quality is fair or poor, it will recommend running the fan to circulate air through the home. But it won’t just run the fan automatically when it determines that the air quality is less than good, which seems like something a smart thermostat should do. Instead, I programmed it to run the fan for 15 minutes each hour, which the Nest and Ecobee also allow me to do.

The last unique part of the GLAS is its built-in Cortana integration. It has this because its software is built on the Windows 10 IOT core, so it’s actually Microsoft’s Windows powering this thing. The only visible manifestations are the fact that it has Cortana and uses the Windows 10 virtual keyboard whenever you need to type in things like a Wi-Fi password.

I was able to activate Cortana on the GLAS from across the room by saying “Hey Cortana” and issuing a command, such as “set the air conditioning to 75 degrees.” The speaker on the GLAS won’t win any awards for sound quality, but it’s clear and you can adjust the volume.

The larger problem is that Cortana just isn’t as complete of an in-home virtual assistant as Alexa or Google Assistant, and I didn’t really find myself needing to talk to it much. Cortana has fewer device integrations for smart home gadgets and fewer third-party app or skill integrations. And since I already have Alexa speakers in my home that are easier to access and talk to than my thermostat (the GLAS can be controlled by them or a Google Home), I didn’t even notice when Cortana reset itself a few days into my testing and needed me to log back in.

That wasn’t the only bug I experienced, either. The GLAS disconnected itself from my Wi-Fi network numerous times, requiring me to reset its connection manually from the thermostat. The mobile app (iOS and Android only; there’s no web interface for desktop control) mimics the control scheme of the thermostat and offers the same number of functions, but it’s horribly slow to connect, even when I’m home and on the same Wi-Fi network as the thermostat.

Those kinds of issues make it frustrating to use the GLAS thermostat, especially when both Nest and Ecobee’s systems perform much better. Add those to the fact that the GLAS doesn’t have remote sensor support (Johnson Controls tells me it’s coming, but it won’t say when), doesn’t have as good automatic functions, and costs considerably more than even the most expensive Nest or Ecobee, and it makes the GLAS look rather weak compared to the competition.

Many of its weaknesses were things the first versions of the Nest and Ecobee suffered from, as well. (Nest thermostats just got the ability to use remote sensors this year, for example.) Since this is just the first version of GLAS, hopefully Johnson Controls will be able to iron out the wrinkles and add more features as time goes on.

But where it is today, floating in front of your wall, the GLAS does look pretty damn cool. If only its smarts were as compelling as its looks.