The Surface Go is Microsoft’s hybrid PC dream made real

It’s time to think of Surface as Surface, and not an iPad competitor

Share All sharing options for: The Surface Go is Microsoft’s hybrid PC dream made real

Microsoft has spent more than six years trying to perfect the combination of laptop and tablet. It’s been a bumpy ride. The original Surface RT suffered from performance issues, a confusing Windows RT desktop mode, and a lack of apps. Microsoft’s Surface 2 improved the kickstand, but little else, and the Surface 3 switched to a full version of Windows in an attempt to make the tablet more useful.

I think Microsoft has now finally nailed the ideal tablet-laptop hybrid hardware at a more attractive price — after years of trying. Surface Go feels like it’s ready to take the Surface concept mainstream, and it’s a lesson for both Apple and Samsung’s tablet + laptop efforts.

Our review of Microsoft Surface Go 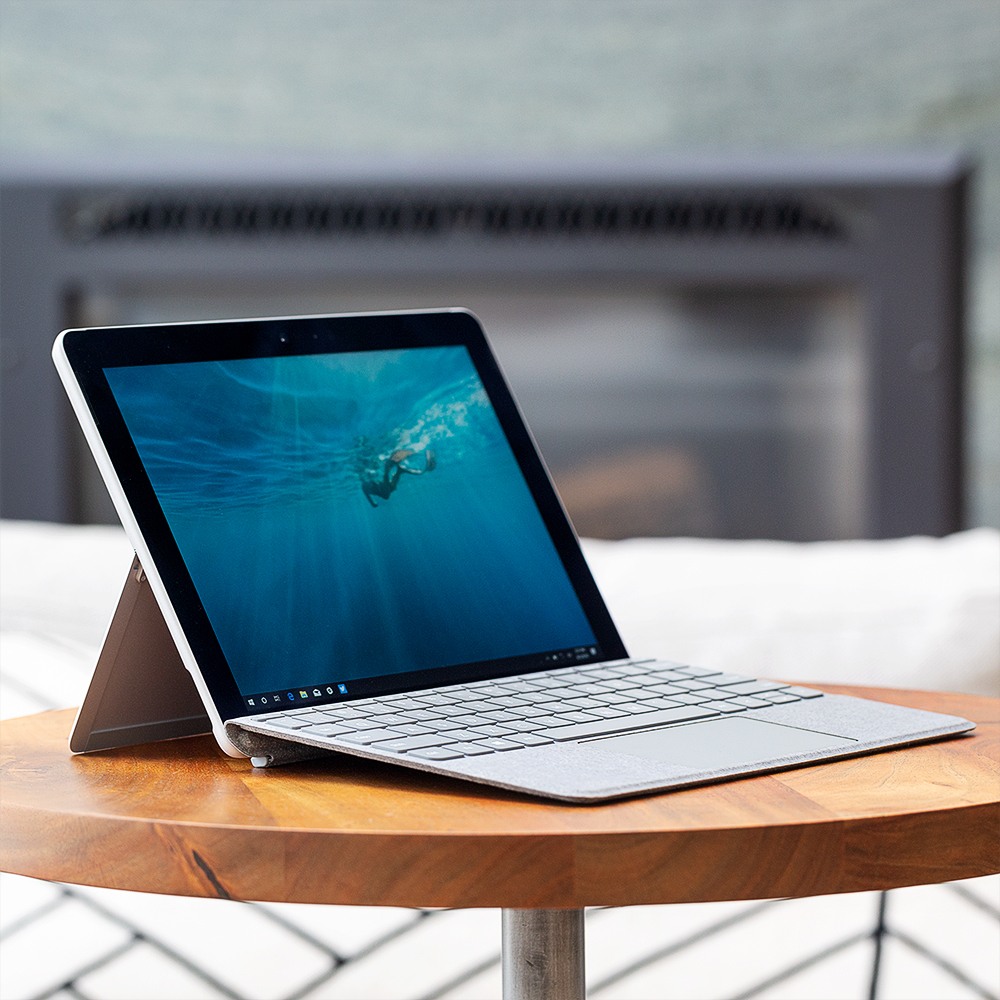 The Surface Go is surprising in many ways. Microsoft has taken the full-range kickstand from the Surface Pro, a great 10-inch display, and the Windows Hello facial recognition camera and packed it into this tiny 10-inch device. The display itself runs at 1800 x 1200 resolution, with a 3:2 aspect ratio like all modern Surface devices. Viewing angles, color reproduction, and brightness are all solid, and (like the overall build quality) not what you’d expect from a $399 Windows device. The worst part of the display is the giant bezels that house it, but you soon get used to them in practice.

My biggest fear with the Surface Go before I started using it for the past week was performance, and whether this really is a miniature Surface Pro. Microsoft has opted for an Intel Pentium Gold 4415Y processor inside, coupled with 4GB of RAM and 64GB of eMMC storage on the base $399 model. I’ve been testing the $549 model with 8GB of RAM and 128GB of SSD storage.

I think it’s this upgraded model that makes the Surface Go feel like it’s for everyone, as I’ve been pleasantly surprised by the performance. Multitasking with multiple apps and Chrome browser tabs hasn’t been an issue. For light workloads, the Surface Go is great on the… go, but this might not be a primary machine for most people who really push Windows.

While basic games from the Microsoft Store like Cuphead run just fine, titles like Sea of Thieves struggle to even hit 30fps at 560p resolution. This isn’t a machine you’ll be running many games on, but for the casual tablet-like games and apps, it will be fine.

The performance issues will only really hit if you’re trying to push the Surface Go beyond basic tasks. Editing photos in Photoshop feels laggy at times, and I can only imagine how much worse that experience will be with the 4GB of RAM model and slower storage. If you only need to do light editing and work while you’re mobile, the Surface Go will handle those tasks with ease. I think for most people that want a combination of tablet and laptop, the Surface Go performance will be sufficient.

Battery life has mostly been around six hours for me, using a variety of apps and workloads. That’s a little less than I had hoped for this type of device, but you can charge through both the USB-C port and Microsoft’s Surface Connector to power the Surface Go when you’re mobile. I’ve had varied experiences with Surface battery life over the years, but the Go seems to be consistent and reliable. Battery life seems to be a little better if you’re just using the Surface Go for things like Netflix or basic tablet functions.

Coupling the new adjustable kickstand and Type Cover together on the Surface Go makes for the most unique part of this device. It’s something that Apple and Samsung are both struggling with on their tablets that are also trying to be laptops. Apple’s iPad Pro keyboard has a single angle which is difficult to use in practice, and the keyboard doesn’t feel as good to type on as the Surface Go’s Type Cover. Samsung’s new Galaxy Tab S4 also has the annoying single angle, and both devices don’t include a trackpad. You can at least use a Bluetooth mouse on Samsung’s latest tablet, but Apple has so far refused to add cursor support into iOS so you’re left reaching out to touch the screen all the time.

With the Surface Go, Microsoft has really nailed the form factor for this type of device. While it’s easy to label it an iPad competitor or a Chromebook competitor, I think it’s time to acknowledge that Surface is its own thing. Microsoft has defined the category well, and its PC partners, Apple, and Samsung have all attempted to follow. I thought Microsoft had given up on 10-inch tablets, but the Surface Go is a pleasant surprise.

Still, as a pure tablet device, the Surface Go is not a solid iPad competitor. Windows 10’s tablet mode is inferior even to the original Windows 8 tablet interface, and Microsoft still hasn’t managed to convince enough companies to create apps that run well in both desktop and tablet modes. Microsoft has had the right ideas here for years, but that hasn’t translated into the right execution.

If you’re considering a Surface Go, you really need to weigh what you value the most from this type of device. A $329 iPad will be a far better tablet experience at this price point, but if you value the ability to do productivity tasks, then the Surface Go will at least satisfy the most basic tablet needs like browsing and Netflix while letting you use it like a real laptop.

For many people, the ability for the Surface Go to be both a tablet and a laptop with the flexibility of Windows is appealing. I’ve enjoyed throwing the Surface Go into a backpack, worrying that I actually threw it in there because it’s so small and light, and been surprised at the amount of work I can do on this tiny device over the past week.

Microsoft has failed with its smaller Surface concepts in the past, but the Surface Go now has the right hardware refinements. Like the Surface Pro, the Go finally makes sense in a world of tablets, laptops, and things in between. I always wanted Microsoft to just make a laptop, and the company did, but I’m glad it didn’t give up on the idea of a small Surface. The Surface Go isn’t perfect, but the build quality, size, and price point could make this Microsoft’s most popular Surface yet.