Share All sharing options for: Sennheiser HD820 review: too closed for comfort

In the imagination of every audiophile, there’s a pair of “endgame” headphones that finally ease our worried minds. Headphones that transcend technical nitpicking and just make us want to listen. Call them zero-FOMO headphones. I have reviewed only two such examples: Focal’s $3,400 Utopia and Sennheiser’s $1,700 HD800 S.

This summer, Sennheiser put forward a fresh candidate for that nearly perfect class with its introduction of the HD820. Using the same audio driver and structural design as the HD800 S, the HD820 is essentially a remix: a closed-back version of the 800 S that keeps the open look and tries to maintain the same transparent sound. The model number isn’t the only thing that’s bigger, though: Sennheiser has cranked up the price to $2,399.95.

Before diving into this review, I’d encourage you to read my Utopia and HD 800 S reviews first. I need you to believe that it’s at least possible for a pair of headphones to cost thousands of dollars and still be worth it — even if this particular pair might not be.

Our review of Sennheiser HD820 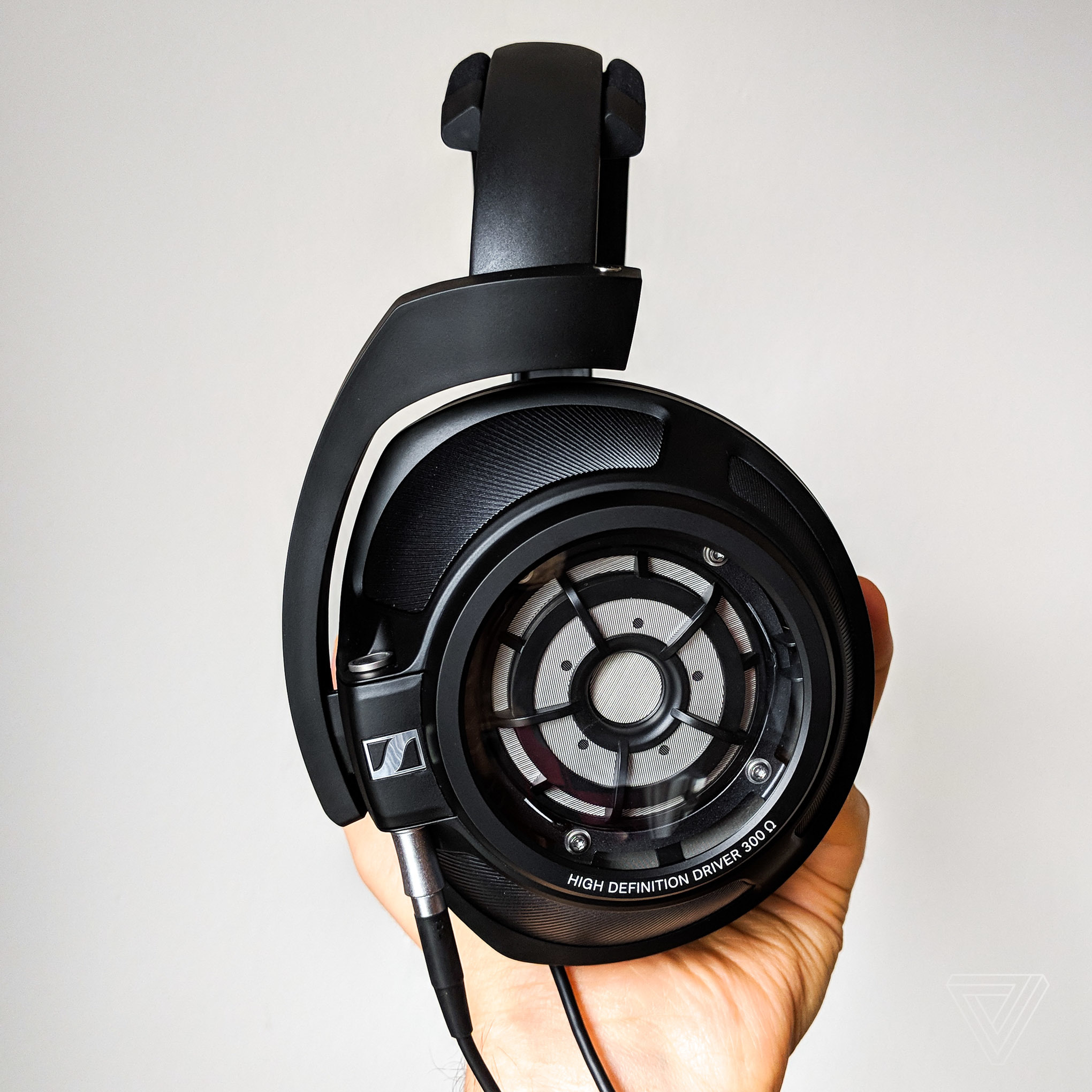 Sennheiser’s HD800 series have always looked like headphones that aliens might wear. Their ear cups are large enough to accommodate the most elvish of ears, and their shape is unlike anything else you’ll find in the world of personal audio. The HD820s keep most of the original HD800 design — which was carried over in the 800 S — but there’s now a Gorilla Glass window crowning a sealed enclosure. This move to a closed-back design addresses one of the few downsides of the 800 S, which is totally open and allows external noise to disturb your listening and your music to disturb people around you.

The general rule with headphones is that open-back designs get you the purest possible sound, while closed-back ones keep your music insulated from external noise. The vast majority of headphones on the market today are closed-back, including almost all earphones. They are what people think of when they think headphones: a way to take your music on the move, keep it private, and isolate yourself from a noisy surrounding.

Open-back headphones, on the other hand, are for people who are willing to compromise on versatility and noise isolation for the sake of the best sound. Without a closed enclosure that creates unwanted reverberations inside the ear cup, an open-back headphone design can be focused on improving the acoustics pointed at the ear instead of fixing the problems created by the shell around it.

When the HD820s made their debut at CES in January, they attracted a lot of attention from curious onlookers at the show. Yes, they’re super expensive, and yes, Sennheiser is a widely respected brand, but the bulk of the crowd was just gawking at their unique design. I’m confident Sennheiser fashioned the HD820s to make them look as exceptional as the technology inside them. Of course, the company would argue that their form is beholden to their function, with chief audio engineer Axel Grell telling me that the concave glass is used to reflect unwanted sound into special absorption chambers.

But just look at them. Sennheiser is definitely subverting the old cliché about artless and humorless German engineering with its new German-made headphones.

The build quality of the HD820s is beyond reproach. Built by hand at Sennheiser’s HQ, these headphones are fit to be anyone’s flagship pair, and you’ll neither hear a creak nor see any imperfection with them. Trust me, I tried (and failed) to find anything to complain about. Sennheiser ships the HD820s in a solid wooden box that conveys a sense of something precious and timeless contained within. Expensive headphones must feel expensive before you even put them on, and Sennheiser checks that box off with aplomb.

Aside from closing off the back, Sennheiser’s biggest design change with the HD820s is a new set of ear pads. With synthetic leather on the outside and microfiber on the interior that touches the side of your face, these pads provide the acoustic seal necessary to experience the full impact of these headphones’ bass. Or they should. Sadly, because the pads are so freaking enormous, that seal is hard to achieve. Other reviewers have measured a drop in bass as large as -11dB for a person wearing glasses and a still significant -5dB for someone who doesn’t have the HD820s seated just right. Yes, you can definitely wear these cans “wrong” even without confusing their orientation.

For a pair of super premium hi-fi headphones, the HD820s are light at 360g / 12.7oz (without a cable attached). Even so, having them on my head for an hour or longer starts to feel fatiguing, with a pressure spot developing at the top of my head. The older HD 800 S are only 30g lighter, but they feel more comfortable. Lest you think all large headphones in this class are inherently awkward and clumsy to wear, I’d advise trying out the MrSpeakers Aeon Flow or the AudioQuest NightHawk. Those headphones have fantastically deep and cushy pads that both help to distribute the weight of the headphones and ensure a good seal no matter how you wear them. Sennheiser’s headphones feel ergonomically prissy by comparison.

With an impedance of 300 Ohm, the HD820s are quite power-hungry and you’ll want a beefy amplifier to plug them into (via the provided 6.3mm, balanced XLR, or balanced 4.4mm Pentaconn cable). Sennheiser helpfully offers one of its own, the $2,399.95 HDV 820, which I also tested and really didn’t like. This amp and digital converter combo unit is beautifully built, has a great knob feel, and is one of the few amps to support the Pentaconn connector, but its sound lacks the warmth to be enjoyable. Pairing it with bass-shy headphones like the HD820s just leads to an ice-cold presentation with lots of high-frequency detail but not enough low-end rumble. Instead of the HDV, I primarily tested the HD820s with my tried and trusted Schiit Jotunheim, which costs $2,000 less.

The sound of the HD820s is something I took weeks of equivocation to make up my mind about. It’s different from almost everything else. Sennheiser doesn’t give these cans the mid-bass bump that practically everyone else employs — and which Audeze is the most hi-fi exhibitor of — and instead promotes the upper mids to be more prominent. The treble is expertly handled, and the bass extends super deep, even if it is lean. The dynamic range of these headphones is, as you might expect, ridiculous, and you’ll hear both the highest and lowest, most subterranean notes in any recording. But my problem is that I end up just hearing everything and feeling not much of anything.

Anyone hoping for a basshead’s Sennheiser flagship will be disappointed

El-P’s “Dear Sirs” from I’ll Sleep When You’re Dead is a searing, escalating tirade against American warmongering, and it usually gets me emotional in less than 90 seconds. With the HD820s, a track like that just loses whatever it is that engages my subconscious mind. The mix is different, as I get less of the low frequencies that drive and ratchet up the momentum, and I don’t feel the same contrast from the high tinkle of the typewriter bell that punctuates El’s imagined letter to US leaders.

Anyone who might have hoped for Sennheiser’s first closed-back HD800 series headphones to introduce some more slamming bass will be categorically disappointed by the HD820s. Under ideal circumstances, they have more bass than the HD 800 S that I adore, but their elevated mids mostly neutralize any sense of added low-end punch. And then there’s the aforementioned fit and seal issue, which is not something that troubles HD 800 S owners since their headphones are designed to fire sound in all directions.

In classic HD800 / S fashion, the soundstage of the HD820s is extraordinarily large. I fully agree with Sennheiser’s claim that this is the most “open-feeling” closed-back headphone, with the widest and deepest soundstage yet. What I mean by that is I can hear sounds as if they’re coming from quite a difference away from me instead of being fixed in a small bubble around my head. With orchestral music, this is absolutely gorgeous, as it lets you identify and separate each instrument and get a real sense of three-dimensional space. Also cool to have in movies. And if you’re a gamer looking for the ultimate headphones to give you that perfect positional awareness through sound, the HD820s won’t let you down.

But there is a cost to this expansiveness of Sennheiser’s sound.

The trade-off Sennheiser makes, and the one I can’t stomach, is the sacrifice of intimacy at the altar of articulation. Tool’s “The Grudge” and “The Patient” from Lateralus are another pair of songs that build up to a cathartic crescendo that just makes me feel good to be alive after I hear it. Except with these headphones. With the HD820s, I feel the need to pull Danny Carey’s drums closer to me, which I do by turning the volume up, but then that makes everything else too loud. And Maynard James Keenan’s vocals are somehow less heart-wrenching as a result, which I think we can all agree is an insufferable offense.

I don’t mind admitting that I had to retreat to my Audeze LCD2 Classics, which are just a warm bath of bassy goodness, at times during my testing of Sennheiser’s HD820s. But I don’t really think the problem is with me. Listening with Focal’s Utopia — whose only, tiny shortcoming might be a slight lack of bass — I get all the detail that Sennheiser gives me, but accompanied by the emotional kick as well. Sennheiser’s own HD 800 S, with its better balance between bass and mids, provides a more satisfying and thrilling listen, even if it can also be accused of lacking a touch of intimacy because everything is so far away.

One question that should have arisen in your mind by now is, what exactly does the closed-back design add to the HD820s? I’ve been comparing their sound to open-back headphones because that’s what they sound like, though they’re technically different. Well, the HD820s do give you some of that promised sound isolation, but it’s not much. They’re really only semi-closed. Sound still leaks liberally out of them, and you won’t be able to indulge your audiophile hobby with your significant other sleeping in the same room. You also can’t casually take these out on your commute, or even to the office, so they’re hardly any more versatile in their use than the typical open-back headphones in their stratospheric price range.

The problem for Sennheiser is absolutely not the technical performance of the HD820s. They are, as far as my ear can tell, entirely distortion-free. They don’t have any weird peaks or valleys in their sound, and they tend to stay mostly faithful to the music they play. But putting them on doesn’t fill me with the same sense of anticipation that I get any time I’m within reach of a Focal Utopia. Listening to music with them doesn’t make my heart beat faster or my head bop. And, most importantly, I’d prefer a pair of the cheaper and superior HD 800 S over the pricier and imperfect HD820 a hundred times out of a hundred.