THX, Dolby, and stereo all in one pricey package

If you have a desk setup and need a pair of speakers, nearly a limitless number of stereo 2.0 speakers exist on the market. But what if you want a THX, Dolby, and stereo sound cocktail, with an added subwoofer, all in one package? If you’re willing to spend $499 for the privilege, Razer’s Nommo Pro is for you.

Here’s the thing: most gamers will invest in a pair of gaming headphones before they’d spend five bills on desktop speakers. However, despite the Nommo Pro’s position as a niche product, it’s still a 2.1 system that can serve a variety of disciplines.

The Nommo Pro is one of the most versatile 2.1 systems you could put on a desk. It’s suitable for THX and Dolby-supported content, or you could ignore those features and stick with the stereo mode. Being able to drastically change the Nommo Pro’s method of playback is partly why it makes up for its more subtle software flaws.

Our review of Razer Nommo Pro 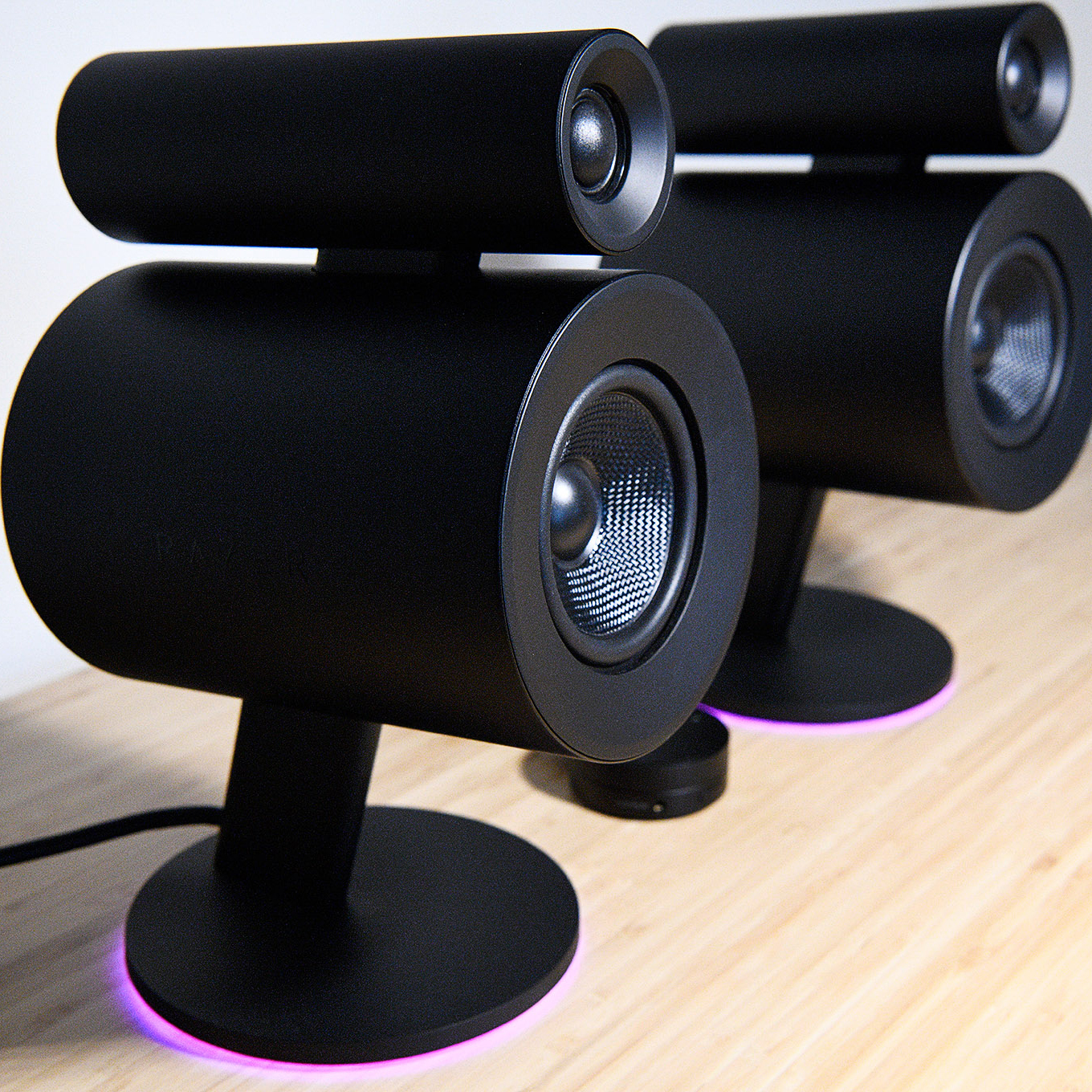 The Nommo Pro is a 2.1 speaker setup composed of two satellites and a huge, downward-firing subwoofer. Seriously, this thing is massive and it produces the bass to match.

When it comes to build quality, I don’t have any issues with the Nommo Pro. Each satellite has a wide base that keeps it stabilized when playing at high volumes. You can’t adjust the satellite’s height, but you can angle them however you want by turning the whole speaker around. The attention to build quality even extends to the wires, which are thick, braided, and give me the impression that they’ll last for a long time (as they should).

The Nommo Pro only comes in black and looks like an interesting mix between a security camera and a jet engine. If you look closely at the oddly shaped metal speakers, you’ll notice they’re illuminated at the base by a Chroma light ring. It’s unnecessary, but this is a Razer product after all.

Thankfully, you can turn off the Chroma effects, or even sync them to your Hue lights. But you can’t use the advanced Chroma effects (like the “fire” effect) available on other Razer products, which is a bit of a letdown.

Supports Chroma but not advanced effects

In order to make full use of the Nommo Pro, you have to download Razer’s Synapse 3 software on your PC and sign up for a Razer account. It’s not ideal, but it’s the only way (besides the iOS / Android app) to control the Nommo Pro’s different audio modes. Ranking the audio modes that sounded best, I’d say it’s in this order: stereo first, THX in second, and Dolby Virtual in third.

Synapse 3 gives you basic control over the bass level and speaker volume, but within stereo mode you can use the sliders to control different frequencies. Similarly, clicking on the Dolby button will present you with movie, game, or music modes. Lastly, the THX button only turns the mode on or off, with no scenario-specific listening modes.

The knob is great, but fine volume control is a miss

I don’t mind this approach to controlling the speakers, but I do wish the software had some sort of finer volume control. The difference between 10 and 20 percent volume on the Nommo Pro is massive, so I often start listening to things at lower volumes — to avoid being bombarded by sound — before I crank the volume to a whopping 14 percent; enough to fill my home office.

For music listening, I preferred the music profile in the stereo mode. It provides the clearest feedback, with the most definition, and suits most music genres. This is contrary to using Dolby Virtual music mode, which returns sound that’s muffled and generally not enjoyable, especially if your content doesn’t support Dolby’s processing. Meanwhile, the stereo movie mode does an excellent job of isolating dialogue from background noise (say, helicopters or traffic) when watching films.

The subwoofer is enormous

The stereo gaming mode adds punchiness to the satellites, interacting with the subwoofer to dial up and equalize game effects (like player footsteps or explosions). I found myself switching between the three modes frequently, noting the differences in sound reproduction for each one, and further appreciating what each did to improve my listening experience.

Using THX for games removes too much detail, but it’s great at balancing audio in movies. Depending on how the film you’re watching was shot (and the audio technology), THX mode may sound better than the stereo movie mode, or vice versa.

Dolby Virtual surround sound on 2.1 speakers isn’t the ideal experience, but in games like Battlefield 1 that support Dolby, the results are mesmerizing. Bullets whizzing past perk up your ears, then ricochet, and land near your character model, triggering some subtle bass from the subwoofer. The Nomma Pro is the first 2.1 system I’ve used that gives me a sense of situational awareness when playing a game that’s similar to what I get when wearing headphones.

In a first-person shooter, you can pick out which direction enemy fire came from and where it went. If a game supports Dolby or THX, sound feels more immersive instead of just loud. On the flip side, if your content doesn’t support either THX or Dolby, then you’ll be fine using the stereo mode, but it won’t sound (or feel) the same.

They kind of look like jet engines or security cams

For music production, the Nommo Pro is probably not ideal. Although it has an excellent frequency range, it’s primarily designed to be an enjoyable listening experience and it colors the sound. This is contrary to what producers usually want: an honest audio reproduction, without extra processing. Also, active or passive (that require a separate amplifier) studio monitors from tried-and-true music production brands like KRK and Yamaha can be less expensive than the Nommo Pro.

Razer would’ve hit a home run if the Nommo Pro could detect the content playing and switch stereo modes accordingly, but unfortunately manual control is the only way.

Good for my desk, but maybe not everyone else’s

If you have desktop speakers that support THX and stereo modes is something you absolutely must have, then get the Nommo Pro. You’ll be satisfied with the performance, the hardware controls, and the presence it brings to a setup. Personally, I’m convinced by the Nommo Pro’s performance and think it’s a great desktop speaker — despite it being so niche — especially when you tailor its settings for playing games, listening to music, or watching videos.

However, if you just need to hear other player’s footsteps in-game, don’t need speakers for your setup, or just want less expensive means of getting high-quality stereo, THX, or Dolby Virtual game audio, then by all means buy a gaming headset. There’s a wide variety of headsets from Razer, Logitech, and others that all have similar features for a fraction of the cost.

Photography by Stefan Etienne / The Verge