What is the price of lazy? For me it’s $160; the discounted sale price for the Deebot N79S vacuum cleaner from Ecovacs Robotics that usually lists for $229. It’s definitely not $949, the price of the new Roomba i7+ with self-cleaning base station that was just announced this week.

Let me be clear: I’ve never seen, let alone tested, this new Roomba that’s so intelligent it can apparently empty itself and map out the contents of your home. I don’t need to, because I’ve been watching this stupid Deebot blindly bump into shit for the last six months, yet still manage to do a good job cleaning my floors. It does so well on its own, and has enough manual controls, that it’s hard to imagine why most people would need to pay more.

Our review of Ecovacs Deebot N79S 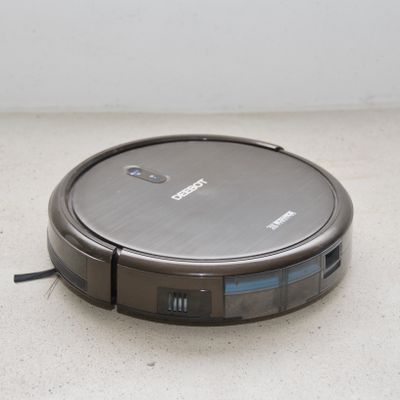 But nothing, I mean, nothing is more frustrating than watching this class of entry-level bump-and-run vacuums roll right past piles of crumbs, over and over again. The Deebot N79S eventually gets there, of course, because even a bunch of monkeys with typewriters will pound out a Shakespearean sonnet on a long enough timeline. That works out to about two hours for the N79S, the time it spends traversing the 13 x 33 foot concrete floor of my primary living area (an open-floor kitchen and living room with a throw rug) before automatically returning to the charger.

The Deebot N79S is not a complete idiot. It does detect the edges of stairs to prevent toppling over, and methodically reroutes when it bumps into a narrow chair leg or gets trapped under the couch. But it repeatedly had trouble with the large framed photographs that sat on my floor and leaned up against the wall. It was either redecorate or get rid of the Deebot, and we kept the Deebot.

The N79S is too loud to have running when I’m in the same room, so I have it scheduled to run nightly, starting at 3AM. Yes, it sometimes gets tangled in a discarded blanket, sock, or a limp USB cable plugged into a wall charger. But for the most part, about 29 out of 30 days by my logs, I awake to find it back in its charger and the floor clean. I have to empty the bin every month or so.

For spontaneous cleanups, I can order the robot around with Alexa using satisfying, but general commands like “Alexa, tell Deebot to start vacuuming” or “Alexa, tell Deebot to start charging.” Otherwise, it can be bossed around more specifically with the physical remote control or smartphone app. I find these useful for directing the bot toward messes in the kitchen that accumulate under the cabinets (using the Edge mode) or for cleaning up after my wife gives one our kids a haircut (using the Spot mode). It’s also light enough to just pick up and plop down wherever in the house I need to clean.

Features like Alexa and a new Max double suction mode are the only two things that separate the N79S from the original N79. Both are features I could live without, so if you find a great deal on the Deebot N79, you should strongly consider it.

I’m late to the robotic vacuum game. But I’ve been quietly pining for one ever since the original Roomba was launched way back in 2002 for a price of $199.95. As a professional gadget nerd, I’m required to always buy the best product available. But the price of the “best” Roomba in 2018 is, well, insane, just to automate a simple chore. For $949, I could pay someone to scrub my entire house and fold my laundry once a week for nearly three years!

If you’re paying more than $200 for a robotic vacuum, then you need to seriously ask yourself why. Do you have a massive Jenga house, a kennel of long-haired pets, or a need for a rolling security camera? Because for most people, a good-enough robot like the Deebot N79S will do a very good job, especially if you wait for the next inevitable sale.