Anker’s truly wireless earbuds are cheap, but not without compromise

I was pretty excited about Anker’s Soundcore Liberty Lite wireless earbuds from the moment they were announced a few months ago. At $80 (and often on sale for even less), they’re priced far below Apple’s AirPods and Jabra’s Elite 65t earbuds, which are the two best choices for true wireless earbuds today.

They’ve also got Bluetooth 5, which has made a noticeable difference in improving connection reliability and eliminating annoyances — like infuriating audio delays when watching videos — that were present in many Bluetooth 4.2-based wireless earbuds. But spending half the cash that you would on our favorite picks means you’ll be giving up some of the extra features and conveniences that come with those products. The Soundcore Liberty Lites strip out the tricks and aren’t without their own problems, but they’re still a rather decent value — if you can deal with several trade-offs. 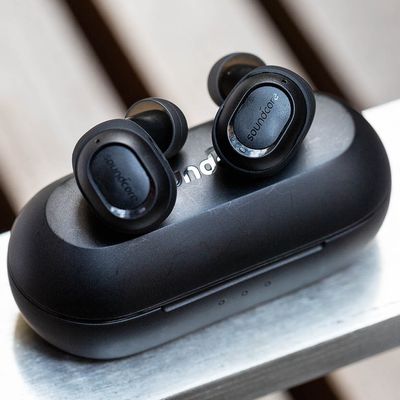 Above all else, what I like most about these earbuds is their fit. They’re the most lightweight, comfortable, and snug true wireless buds I’ve put in my ears yet. Comfort very much depends on ear shape, I know, but Anker throws in an army of wing tips and silicone jackets if the out-of-box fit isn’t as good to your ears as it was to mine. The contours of Jabra’s otherwise excellent Elite 65t can cause a bit of soreness after an hour or so, but that didn’t happen here.

And when they’re in, they sound pleasant. The Liberty Lites deliver an audio balance that leans into the bass a bit but not to a problematic degree. The soundstage is wider than I expected it would be, with instruments and vocals all having their own distinct space in the mix. The high end can be a bit sharp with excessive sibilance on some recordings, but that’s my worst complaint.

I don’t think the Liberty Lites sound as detailed or fundamentally as good as AirPods, Jabras, and other pricier earbuds, but for what they are, I found the audio performance acceptable. Dropouts were rare, but they happened — especially if my phone was in my left pocket; Anker recommends you keep it on the right side of your body. And sometimes, likely due to signal interference, I’d notice audio being heavily shifted to one earbud or the other for a few seconds before moving back to the right balance. One thing I didn’t expect? The mic in the Liberty Lites is actually really good and worked perfectly for phone calls (which utilize both earbuds) and talking to Siri.

The carrying case is compact and wholly pocketable. It flips open with a nice snapping mechanism, revealing the earbuds inside. Both of them are magnetically held in place; you can flip the open case upside down and even shake it, but they won’t fall out. The inside of the case is glossy plastic, which looks a bit cheap, and even the matte exterior picks up blemishes and marks from casual everyday use, so that’s disappointing. It charges over Micro USB; I’m more willing to forgive that for an $80 product than for something that costs hundreds.

Your experience will alternate between “wow, how are these only $80?” and “ugh, I guess that’s what $80 gets me”

Anker says the Liberty Lites should get 3.5 hours of battery life on a single charge, and the case is good for another nine hours. But this is where some of my troubles started. A few times — with two separate review units — I’d pull the earbuds out of a charged case, start using them, and within 30 minutes, I would get several low battery warnings before they powered off completely. This was the exception, not the rule, but it was still a bit concerning. It’s hard to say whether the earbuds weren’t properly turning off when placed in the case or if they weren’t making sufficient contact for charging (despite the strong magnetic hold). And yes, I removed the tiny plastic that covers the metal contact points on both earbuds, a strange packaging decision that has flummoxed many buyers.

When you’re spending this little on true wireless earbuds, it’s worth knowing what you’re giving up, so let’s run through some of what’s missing from the Liberty Lites. Maybe one of them is a deal-breaker for you, or maybe you’ll willing to trade it all for that $80 price tag:

Can you do without all of that? If so, and if you’re really on a budget, the Soundcore Liberty Lites could be worth a shot. For half the cost of AirPods, there’s a lot to like between the excellent fit and decent-enough sound. They’re a step above Anker’s other true wireless options, but just one step.

Between the battery bugs I encountered and a little too much frustration when switching back and forth between devices, I can’t quite give them a hearty recommendation just yet. It’s unfortunate that Anker has no real way of delivering firmware improvements to these things because if those were fixed, the Liberty Lites would be a stunning value. As is, they’re still a good benchmark for how far this category has come and how quickly prices are dropping.