The Folio is a unique laptop, but it isn’t perfect

Share All sharing options for: HP Spectre Folio review: more laptops should be wrapped in leather

There’s nothing really quite like HP’s new Spectre Folio. For the past few years, the concept of a “laptop” has been constant. There are the traditional, clamshell designs, which are largely derivative of Apple’s MacBook Air design. There are the 360-style convertibles with screens that flip all the way around for tablet functions, like Lenovo’s Yoga line. And then there are those convertible laptops with fully detachable screens that can be used as standalone tablets, such as Microsoft’s Surface Pro or Surface Book.

The $1,299 and up Spectre Folio fits into… none of those descriptions. It doesn’t look like a MacBook Air, it doesn’t have a 360-degree hinge, and it doesn’t have a detachable display. Yet, it’s still a 2-in-1 with the ability to switch between a standard clamshell laptop and a tablet-style device. We haven’t seen a laptop with a hardware design this different since the heady days of Windows 8’s craziness.

On top of that, the Spectre Folio is wrapped in leather, making it visually and tactilely different from any computer I’ve ever used before. It is truly one of the most interesting laptops released in years.

Interesting and unique do not mean good, however, and the Spectre Folio is not a perfect device. But the problems it has can’t be blamed on the clever hinge or the leather finish.

Our review of HP Spectre Folio 13 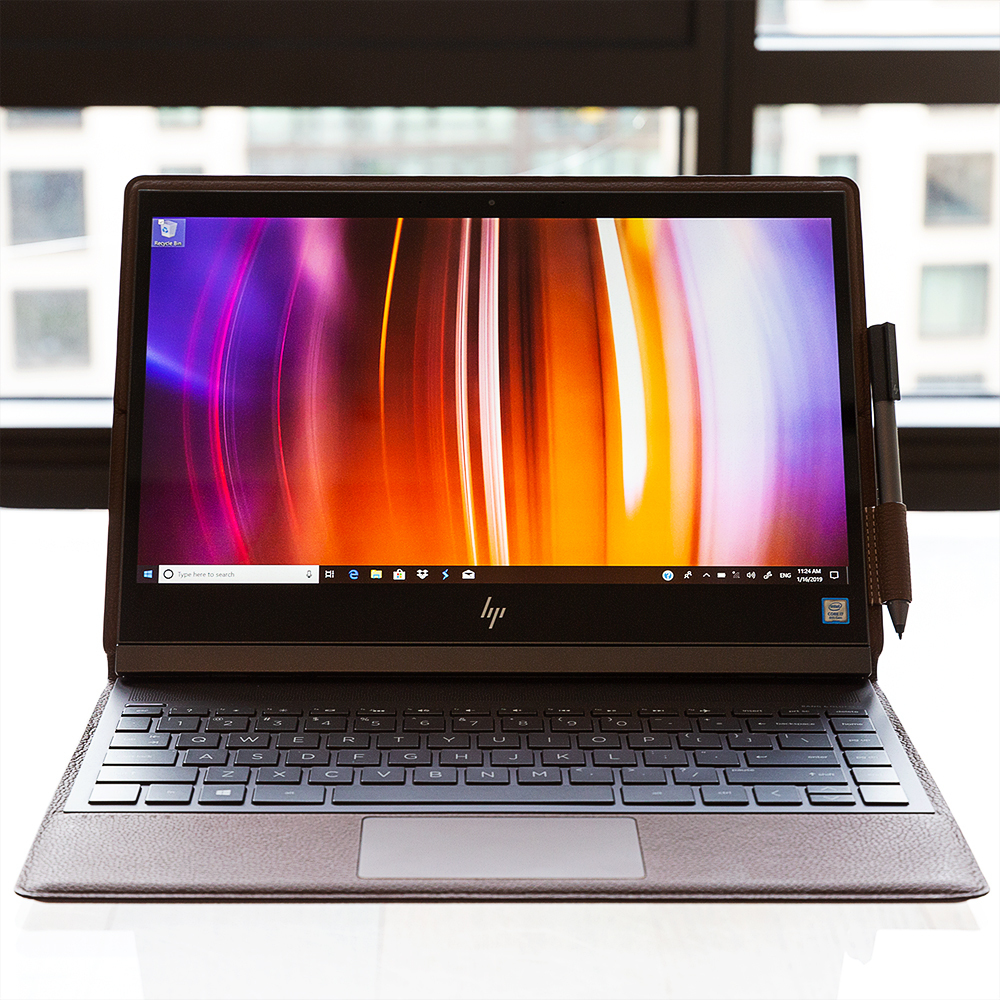 The most obvious thing that separates the Spectre Folio from, well, every other laptop you can buy is that it is wrapped in actual leather. It’s not a case — the leather cannot be removed because it’s integrated into the computer’s metal frame. And it’s not plasticky, fake leather, either — it is genuine leather that HP says is harvested from the scraps produced during the manufacturing of other leather goods. It looks, smells, and feels like the real thing because it is real.

The leather, which comes in brown or burgundy, not only gives the Folio a distinct look, but also gives it a different feel compared to other laptops. The finish wraps around the top deck, so your palms are always resting on soft cowhide instead of cold metal. The borders of the leather wrapping extend beyond the metal frame, so there are no real exposed edges or sharp corners. In those respects, it behaves a lot like a case you might put on a standard laptop, but since it’s integrated into the Folio and not removable, it’s far less bulky than a case might be.

Leather is used in a variety of applications because it’s durable and actually looks better the more you use it. The leather finish on the Folio should prove to be more hardy than the Alcantara fabric Microsoft uses on the Surface Laptop, though I haven’t used the Folio long enough to fully put that to the test. In the month or so I’ve been testing the device, including using it on road trips and at demanding press events like CES, it has maintained its appearance and still basically looks brand-new.

The leather finish makes the Folio heavier than expected

Leather is not a light material, however, and the Folio is a heavier computer than many other laptops in its class. At 3.26 lbs, it’s more than half a pound heavier than the Surface Laptop 2 and a quarter pound more than even a 13-inch MacBook Pro. That doesn’t sound like a lot on paper, but it is something I immediately noticed when picking up the computer. The Folio’s very thin design doesn’t help here, either — it weighs more than you’d expect when looking at it.

Even with that compromise, I still really like the finish of the Folio and hope it’s something that HP uses more in the future.

The other defining characteristic of the Folio is its hinge, which allows the computer to quickly transition from standard laptop mode to tent and tablet modes. The frame has a flex point right in the middle of the screen, and you have to snap the bottom of the screen off the frame (it uses magnets) and pull it forward to switch positions. It almost feels like you are breaking the screen in half in the process, but the action is easy to perform quickly.

Pull the screen forward and place the bottom of it between the keyboard and the trackpad and the Folio is in its “tent” mode, which is ideal for watching movies or Netflix on a plane. Interestingly, you still have full access to the trackpad in this mode, so if you don’t want to make use of the touchscreen, you don’t have to. But annoyingly, there are no physical volume controls when you move the screen to this position, so the only way to adjust the volume is by using Windows 10’s on-screen controls.

You can also continue to push the screen until it rests entirely on top of the lower deck, forming a large tablet surface to work on. HP includes an active pen in the box with the Folio, housed in a goofy-but-functional loop on the right side of the screen. You can write or draw on the screen when in tablet mode, and the hinge is strong enough to hold the screen at a variety of positions between tent mode and fully flat.

The Folio’s internal components aren’t as interesting as its external design, but there are more than a few points to highlight. The Folio uses either an Intel Core i5 or Core i7 Y-series processor, which has no fan and is paired with either 8GB or 16GB of RAM. Y-series chips are not the most powerful processors available, and can easily get bogged down and overloaded, but I’ve been impressed with the Folio’s performance for day-to-day productivity work. I’m able to run as many tabs as I want in either Edge or Chrome, along with Slack, mail, Word, Twitter, and many other apps without hitting frustrating slowdowns or bottlenecks. I even used the Folio for photo editing in Adobe Lightroom and Photoshop, all without pulling any of my hair out. My $1,800 review unit has the Core i7 chip and 16GB of RAM, so it’s basically maxed out in terms of specs, but the performance delta between the Core i5 and Core i7 isn’t huge and I wouldn’t be too surprised if most people are just fine with the lower-end model.

No fan means the Folio operates silently, and it surprisingly stays cool, too. I’m not sure if the leather helps insulate the heat from reaching my legs or if HP’s temperature management just works better here than in other laptops, but the Folio remains cool the entire time I use it.

The best part of the Folio’s Y-Series chip is that it enables incredible battery life. I’m able to easily use the Folio for more than a full workday without plugging in, even when I’m using battery-hogging apps like Slack. That’s more than I’m accustomed to from other premium Windows or Mac laptops.

For I/O, the Folio has three USB-C ports, two of which are Thunderbolt 3, but no USB-A ports. HP includes a dongle in the box for your old USB-A devices, and the USB-C charger works with any of the Folio’s ports. There’s also a 3.5mm headphone jack, which will be important later on.

The Folio’s keyboard is also excellent: it has comfortably sized keys, good key travel, and backlighting. But the component that has me most excited is the optional integrated LTE, which works on AT&T, Sprint, and T-Mobile. The SIM card is cleverly hidden inside the display hinge, and it admittedly took me quite a few minutes to locate it when I was setting up the computer. LTE on the Folio is just as good as LTE on the Surface Pro: it allows me to connect to the internet from basically anywhere without having to worry about Wi-Fi availability or hassle with tethering my phone. It’s something every computer should have an option for at this point, but it’s still very rare to see.

Most of the Folio experience is excellent, but there are three areas that could either use improvement or are just downright bad.

The 13-inch display is mostly fine. I’ve been testing the 1080p version (a 4K option is available, but at this size is completely unnecessary) and it’s bright, with good colors and viewing angles, and only consumes 1W of power, which helps with that long battery life. But it’s stuck with a 16:9 aspect ratio, which feels horribly cramped compared to the 3:2 screens available on Surface computers. There’s also a giant, unsightly “chin” at the bottom that would all but disappear if the Folio had a 3:2 screen. At least there’s a Windows Hello-enabled webcam at the top, where it belongs.

The Folio’s positive experience is wrecked by lousy trackpad drivers

Remember how I said it would be important that the Folio has a headphone jack? That’s because the Folio’s speakers are horrible. They are sharp and sibilant with virtually zero bass reproduction. They do get loud, and are quite functional for video calls, but the audio is miserable for music or movies. And when the Folio is in the tent mode, the sound echoes around in the cavity that’s formed behind the screen, making it even worse.

But the worst part of the Folio is its trackpad. Not because of the hardware — it’s glass and smooth to the touch — but because HP is still using horrible Synaptics drivers instead of the far superior Windows Precision drivers from Microsoft. There is support for multitouch gestures and scrolling, but the response is laggy and it’s just frustrating to use. The entire time I was using this computer at CES I was cursing myself for not bringing a mouse along with me — it’s that bad. HP is the last major laptop manufacturer that hasn’t switched its premium line of computers over to Precision drivers and the Folio experience suffers because of it.

Those faults are enough to give me pause when recommending the Spectre Folio, which is disappointing, because it does so many other things so well. And it’s a unique fish in a sea of look-alike laptops, which is refreshing and exciting. But I’ll wait until the next version, when HP hopefully fixes the display, speakers, and especially the trackpad.