A 49-inch ultrawide monitor is extravagant, ridiculous, and amazing

Dell’s UltraSharp U4919DW monitor is a joy to use

Share All sharing options for: A 49-inch ultrawide monitor is extravagant, ridiculous, and amazing

There are plenty of ultrawide monitors available, but Dell’s UltraSharp U4919DW stands out because it’s the first 49-inch ultrawide monitor with a QHD resolution. It’s extremely wide, has a pixel count that tops out at 5120 x 1440, costs $1,699 but can be found for $1,349 on sale, and can be split into two 27-inch 16:9 views. Its immense size and resolution mean you’ll have screen real estate to play with, with enough vertical pixels to make elements on-screen look proportionate, despite its uncommon 32:9 aspect ratio.

The UltraSharp U4919DW surely isn’t for gamers or creatives; it doesn’t have HDR, is limited to a 60Hz refresh rate, doesn’t have any frame sync tech, and doesn’t feature any other color certification other than 99 percent sRGB. For those of you looking for better multimedia performance, Samsung’s upcoming 49-inch monitor with 120Hz refresh, HDR, and FreeSync 2 might be a better fit.

By granting you the virtual real estate of two, 27-inch QHD monitors without a bezel separating them, the U4919DW monitor is best suited for finance and business users — the sort of people who need to display and work on massive Excel documents. Or in my case, it’s ideal for having four huge windows side by side, each one for a different part of my workflow.

Our review of Dell UltraSharp U4919DW 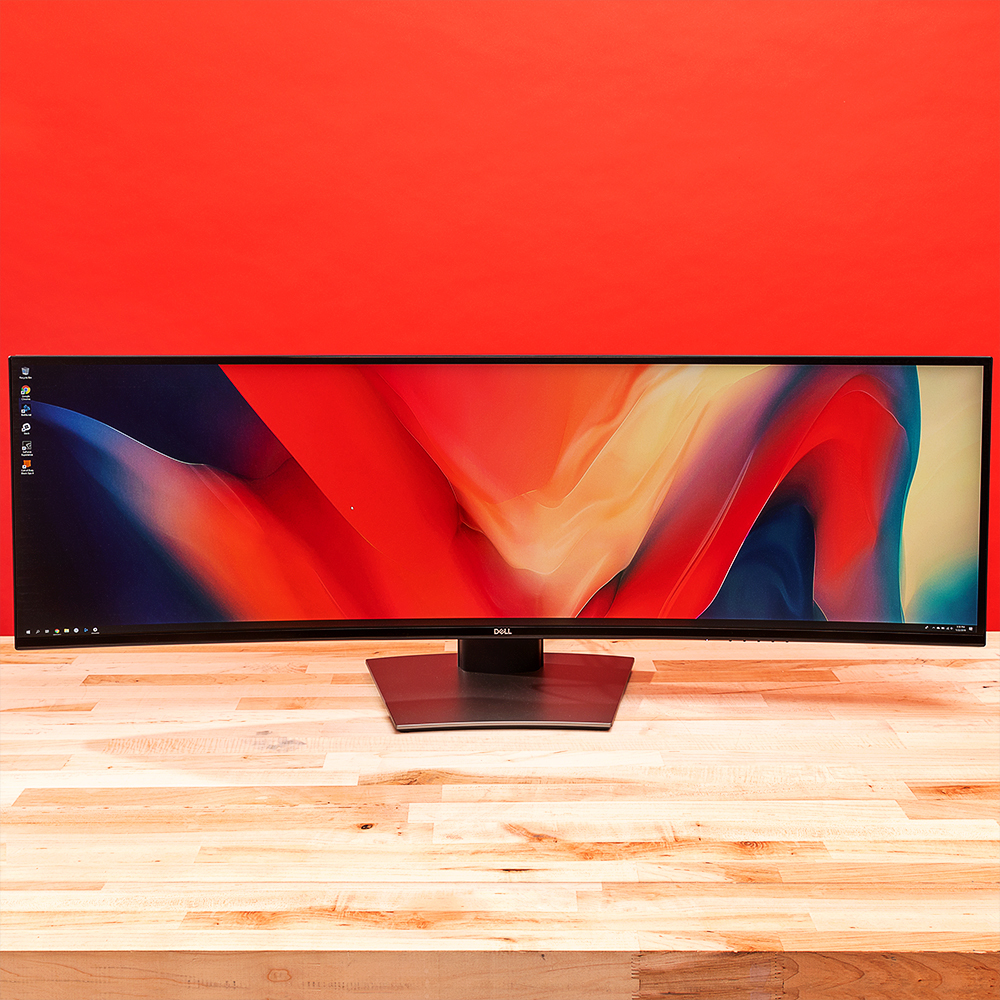 The first thing that made me smile about the U4919DW wasn’t even the screen itself, it was the buttons. Too many monitors make it a chore to change the simplest of settings (like brightness, contrast, display mode, etc.), but Dell took the right approach here. There are just six buttons, including the power button, each dedicated to a specific function and are labeled on-screen, instead of on the monitor. Once you’ve started using the on-screen display, you have options to change everything from color temperature, saturation, gain, hue, and even shutting off the power button light while the screen is on.

Aesthetically, the UltraSharp U4919DW looks like… any other UltraSharp monitor you might have seen in any ordinary office. It has the same gloomy black and dark gray color scheme as other UltraSharps, with slim black bezels, and a gargantuan base to keep the monitor stabilized. It also supports 100 x 100mm VESA mounts, so you can elevate it on an arm, provided the arm is strong enough to handle the U1919DW’s 38-pound weight.

On the left of the screen are two USB 3.0 ports where you can connect a mouse and keyboard to use the integrated KVM feature; it’s pretty straightforward. By connecting your own peripherals, then setting your own hotkey, you can “switch” between two computers connected to the U4919DW monitor, without having to reconnect anything. You can even have both computers up on the monitor at the same time, thanks to the massive size of the U4919DW’s screen. It’s an incredibly useful way of using multiple machines with minimal clutter and, if used correctly, can be one of the best multitasking experiences.

There are ports aplenty

For example, I could start my “work” by dedicating the left side of the monitor to my HDMI-connected Nintendo Switch, while using the right side with my PC connected over DisplayPort. In this scenario, I can read up on Smash Ultimate patch notes, watch gameplay, then practice what I’ve learned right next to the source material, all on the same display. Similarly, I had a laptop and desktop connected to the same display simultaneously, and was able to control both systems using a single set of peripherals. You can get creative about how you split windows in one PC’s workspace, or between two different devices that can transmit video over USB-C, DisplayPort, or HDMI.

This monitor is so wide and so large that it takes some time to get used to just how big of a screen it actually is. A 49-inch TV screen is entirely common and doesn’t look that big because of how far away from it you are. But the U4919DW occupies the same space as any other computer monitor: two feet from your face. At that distance, this screen is so large you can’t even see the whole thing without moving your eyes or your head. Even if you’ve used a 34-inch ultrawide before, the 49-inch model is considerably different.

You’ll have to learn how to use it effectively

Once I started getting used to working with it — which took about two days — a quick glance using my eyes was enough to cover all the information on-screen. The curve helps a ton here; if this were a flat panel, it’d be much harder to quickly scan and absorb.

Sheer screen size aside, the UltraSharp U4919DW has excellent viewing angles when you’re sitting in the center (as you should), looking slightly from the side, or tilting the display down or upward.

No other monitor I’ve ever used has increased my level of productivity like the Dell was able to. During this year’s CES, I used a custom layout to split a permanent window of The Verge, a text editor, Tweetdeck, and live streams of events occurring on the ground. All the information I needed was a glance (or slight head turn) away. No need for messing around with windows, tabs, or attempting to make things fit on-screen. Thankfully, Windows handles scaling to the 5120x1440 resolution well, so icons don’t look disproportionate or overly tiny.

The U4919DW isn’t meant for gaming, but it’s incredibly immersive

On the flip side, despite not being made for gaming, the UltraSharp U4919DW’s 60Hz refresh rate is decent enough to play some PC games. There are even a few games that make good use of the 32:9 screen ratio, so much so that it almost feels like an unfair advantage. League of Legends is one notable example; you’re able to view much farther into the arena then you normally would on a 16:9 display, or a 21:9 one for that matter. Furthermore, the massive size of the curved screen helps with immersion, even in FPS games where the increased field of view isn’t as drastic as League’s, like Rainbow Six: Siege or Call of Duty: Black Ops IIII.

Dell’s Display Manager app (Windows only), allows you to automatically tile apps in up to 38 predefined templates, or you can create your own. I’ve been using this feature on and off as needed for my individual work, with my own preferred window layout. It’s a great way to go about preserving your workflow, so you can avoid playing jigsaw puzzles with your windows instead of working.

There’s even a handy feature called “auto-restore,” which tracks and remembers the position of windows, even if you disconnect and reconnect to the monitor. That’s pretty useful.

Dell’s UltraSharp U4919DW monitor ticks all the boxes for an ultrawide based around productivity. You’ve got all the ports, pixels, screen, and image customization you could ever need in a work monitor. Despite the U4919DW’s lack of HDR, G-Sync, or FreeSync, it’s still a capable screen. And when it’s used in tandem with the Dell window manager app, it’s ideal for productivity and multitasking users.

Even if you still aren’t used to viewing 49 inches of the Windows 10 or macOS environments all day, then having the ability to split the U4919DW into two, 27-inch QHD views is a great alternative. Plus, the inclusion of KVM support means you can control two computers from the same monitor. And that’s all just the icing on the cake once you realize how good this screen looks.