Vive Cosmos review: not out of this world

A decent headset that can’t beat the competition

Share All sharing options for: Vive Cosmos review: not out of this world

HTC’s Vive headset helped create virtual reality as we know it today. The Vive was the first big consumer headset to ship with motion controllers, and it normalized the idea that VR was about physical movement, not just visual immersion. Now, three years after the Vive’s release, HTC is ready to move on. It’s replacing the consumer Vive with a headset called the Vive Cosmos, which started shipping last week. Where the original Vive was a groundbreaking product, though, the Cosmos is playing catch-up in a crowded field.

The $699 Vive Cosmos is a high-end, PC-powered VR headset. (HTC originally said it might eventually be powered by a phone. But for now, you’re going to need a capable PC.) It occupies a middle ground between the $399 Oculus Rift S and the $999 Valve Index. Like the Index, the Cosmos offers a high-quality screen and a more open hardware design. But like the Rift S, it ditches external trackers for convenient inside-out cameras. And it adapts the increasingly standardized Oculus Touch controller design, rather than the old Vive remotes or the futuristic Index controllers.

Our review of HTC Vive Cosmos 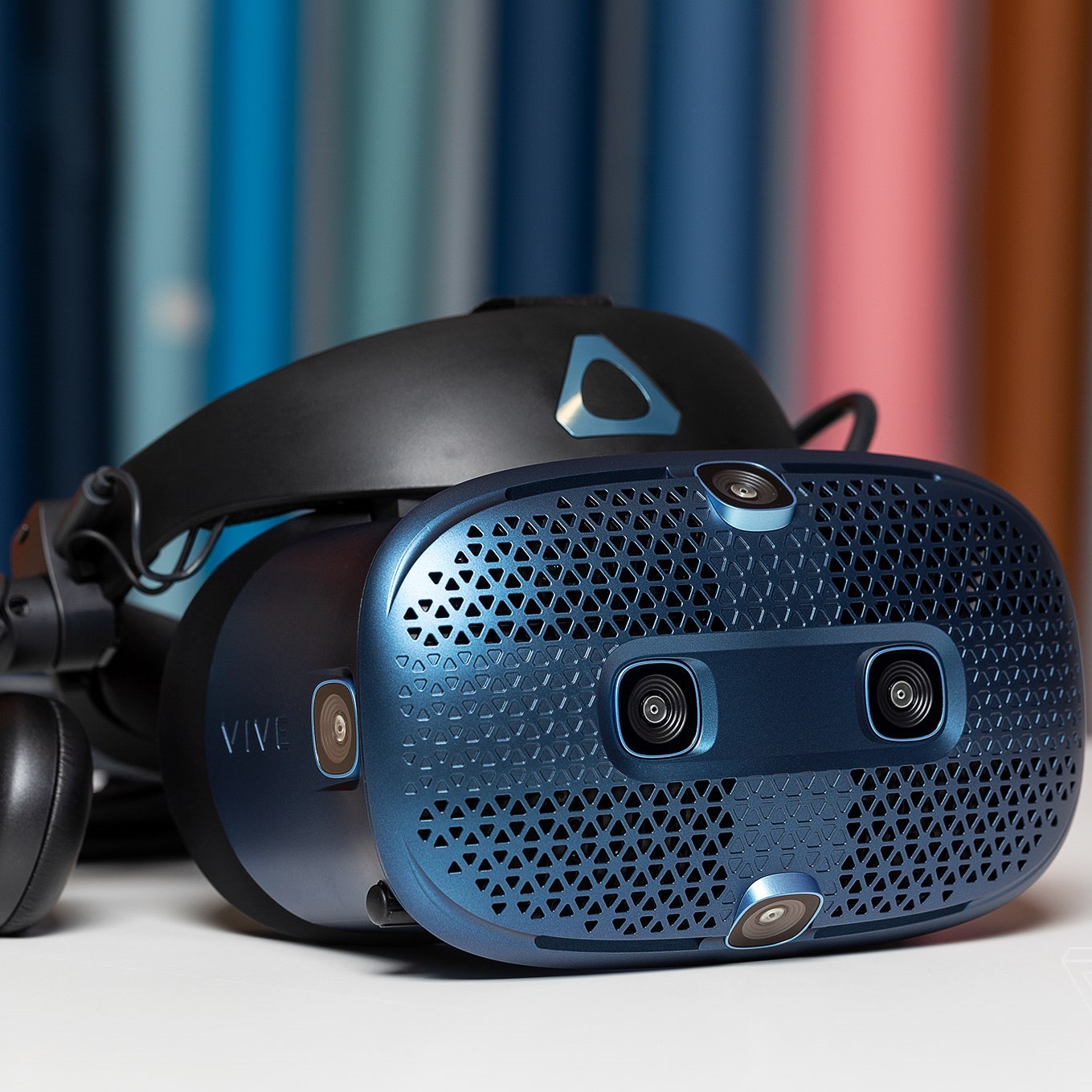 In theory, the Cosmos could appeal to people who want feature-rich hardware at a slightly lower cost. It could also provide a blueprint for HTC’s next business-focused headset, which is currently still the Vive Pro from 2018. But I’ll avoid burying the lede: my own Vive Cosmos experience wasn’t much fun. While the headset is clearly capable of excellent performance, I was fighting its hardware and software every step of the way — from the clunky interface to some frustrating tracking issues. HTC seems committed to improving this experience, so I’m not writing off the Cosmos yet. I’d just hoped for more from one of VR’s biggest players.

The Cosmos is certainly a distinctive-looking headset. It’s got a dark blue body with a latticed front plate, flouting the VR industry’s love of black-on-black minimalism. It places two large square tracking cameras front and center, plus four more on the sides, offering what HTC calls a 310-degree tracking field. The entire front plate is removable, and HTC says it’s releasing replacement plates with extra features, starting with one that supports the old Vive’s lighthouse laser tracking. As an added convenience, you can flip the screen up like a motorcycle helmet visor, clearing your field of vision without fully removing the headset.

The Cosmos features a 2880 x 1700-pixel screen or 1440 x 1700 pixels for each eye. It’s ever-so-slightly higher resolution than the Valve Index’s 2880 x 1600 screen and a noticeable leap past the Rift S’s 2560 x 1440 pixels. The field of view is still around 110 degrees, which is a little lower than the Index’s but standard for other VR headsets. For many buyers, the precise numbers won’t matter — just remember that the headset feels more goggle-y than the Index, but the “screen door” effect that afflicted HTC’s first-generation Vive has been greatly reduced.

HTC has almost completely reworked the original bare-bones Vive design. The Cosmos ships with attached headphones, which I prefer over the directional speakers that Valve and Oculus are using. It doesn’t match the Index’s fantastic audio, but it’s not blasting noise at everyone around me. (Like most headsets, you can also use your own headphones.) The original Vive had awkward Velcro straps, but the Cosmos adopts a plastic “halo” design similar to the Rift S or Sony PlayStation VR. There’s a knob at the bottom for changing interpupillary distance, but you’ll mostly focus the headset by adjusting how it sits on your head.

Inside-out tracking is a great feature that I’m glad to see HTC adopt because it makes the entire VR setup process faster, simpler, and less obtrusive. Instead of mounting laser lighthouse beacons around the room, you just have to plug the headset into a small adapter box, connect DisplayPort and USB cables to your computer, and plug the box into a power outlet. The cameras detect edges in your environment and use them as anchor points. They recognize a pair of motion controllers by tracking a distinctive light pattern, which, incidentally, makes the Cosmos look like it got a couple of sick tribal tattoos in the ‘90s.

When the tracking works, it works well. Beat Saber is one of the biggest stress tests for VR controllers, but the Cosmos was up to the task. It felt easily as responsive as the Quest or Rift S. And overall, my view of the world rarely juddered or felt floaty, like it has with some inside-out headsets.

The Cosmos really hated my lighting

But the system was frustratingly fallible. The Cosmos headset sometimes lost tracking when I reached for something on the floor, so the world snapped out of place. Most inside-out systems can’t “see” controllers if they’re held too close to your face, and the Cosmos is no exception. The Cosmos took unusually long to recover, though. My virtual hands could stay stuck for several seconds, which was a huge problem in fast-paced games.

The Cosmos frequently warned that I was getting suboptimal tracking because of bad lighting conditions. Unfortunately, those conditions included “my living room in midday with an overhead light turned on,” so I’m not sure how I could have improved them. HTC suggested this could be a defect in my headset, and that’s possible. But other reviewers have also mentioned problems with light and tracking. HTC pushed out an update to improve lower-light performance, and my Cosmos’ tracking did seem to get better over time. Even so, it never felt completely reliable, especially because of the system’s glacial reorientation speed.

Beyond the Cosmos’ tracking issues, the system is full of little irritants. HTC’s first Vive was built entirely on Valve’s SteamVR platform. HTC has asserted its independence since then, building an alternate ecosystem known as Viveport. The Cosmos sort of runs both. It uses a Viveport interface, but it’s still running on SteamVR technology, and you can launch SteamVR games through the headset’s Viveport portal.

Things don’t have to be this complicated

This cross-compatibility sounds great, but in practice, it’s confusing and redundant. Setting up the Cosmos requires installing and toggling between two completely different platforms, and after setup, there are two separate control panels on your desktop. And the Viveport interface isn’t an improvement over SteamVR. Its pop-up “Lens” menu is a constellation of unintuitive and oddly placed icons, overcomplicating what is basically an app list with some settings options.

The Cosmos controllers are bigger and heavier than the Oculus Touch, and they require twice as many AA batteries, two for each controller. They seem carefully designed, featuring super clicky buttons and an extra gamepad-style bumper above each trigger. But they’re awkward and bulky. I can’t swing the controllers around in Beat Saber without accidentally hitting the grip buttons, and when I’m moving quickly enough, inertia threatens to pull them out of my grasp. While the bumpers aren’t hurting anything, I have yet to find a good use for them because most developers aren’t building Cosmos-specific interfaces.

While halo headset designs are usually a recipe for comfort, with the Cosmos, I had trouble finding a position that didn’t either hurt my forehead or tilt the screen at a blurry angle. The hardware isn’t unusually uncomfortable, but it’s disappointing that HTC didn’t draw more inspiration from its Vive Deluxe Audio Strap, which is a surprisingly comfortable strap upgrade for the original Vive.

These are nitpicky details, and if the Cosmos were being released a couple of years ago, I’d still wholeheartedly recommend it. But Oculus and Valve already have mature VR software platforms with more streamlined interfaces and robust social features. (HTC is preparing to add friends lists and other social features to Viveport.) The Oculus Rift S and Microsoft’s Windows Mixed Reality headsets all feature highly reliable inside-out tracking systems that I’ve used in fairly low light. And Valve is experimenting with weird and exciting hardware ideas that make the Index more appealing.

The Cosmos doesn’t have any of these selling points, and it’s not particularly cheap, either. HTC’s Viveport catalog does offer some decent deals: its $13-per-month Netflix-style Infinity service offers unlimited access to more than 500 apps, which is great if you want to sample short VR content. But Viveport already supports the Rift and Index, so you don’t need a Cosmos to use it.

HTC has a proven record of upgrading its hardware

Is there a good reason to buy a Cosmos? The best argument is HTC’s love of hardware upgrade kits. Valve’s Index has a slot for adding mods, but it’s aimed at letting people build custom hardware. Meanwhile, HTC has improved the original Vive with an alternate head strap, an eye-tracking system, a wireless adapter, and a tracking disc to make building custom controllers easier. If it follows suit with the Cosmos, you could enjoy some features that would require buying a whole new headset otherwise.

The Vive wireless adapter is already Cosmos-compatible, and the company promises we’ll see some exciting custom faceplates in the future, although it’s revealed few details. On the other hand, these upgrades will make the Cosmos much more expensive. The wireless adapter, for example, costs around $300. And some things, like the display itself, simply can’t be upgraded.

We’re near the end of a VR hardware cycle, and the next massive leap in headset tech seems years away. If HTC drops the Vive Cosmos’ price and improves its performance, it’s certainly got time to make the headset attractive. Otherwise, the Cosmos is a fundamentally decent headset — but one with a lot of little downsides and few bright spots to make up for them.