There are a lot of things I can tell you about the Asus ZenBook Pro Duo, but you likely don’t care about any of them. You — like nearly anyone else who looks at the ZenBook Pro Duo — are likely here for one thing: the absolutely wild-looking second screen that gives the laptop its name.

It’s not the first two-screen laptop by any means: companies (including Asus) have been trying to figure out a way to graft a second display onto our computers for years. But Asus’ implementation here is different in that it’s shockingly useful. 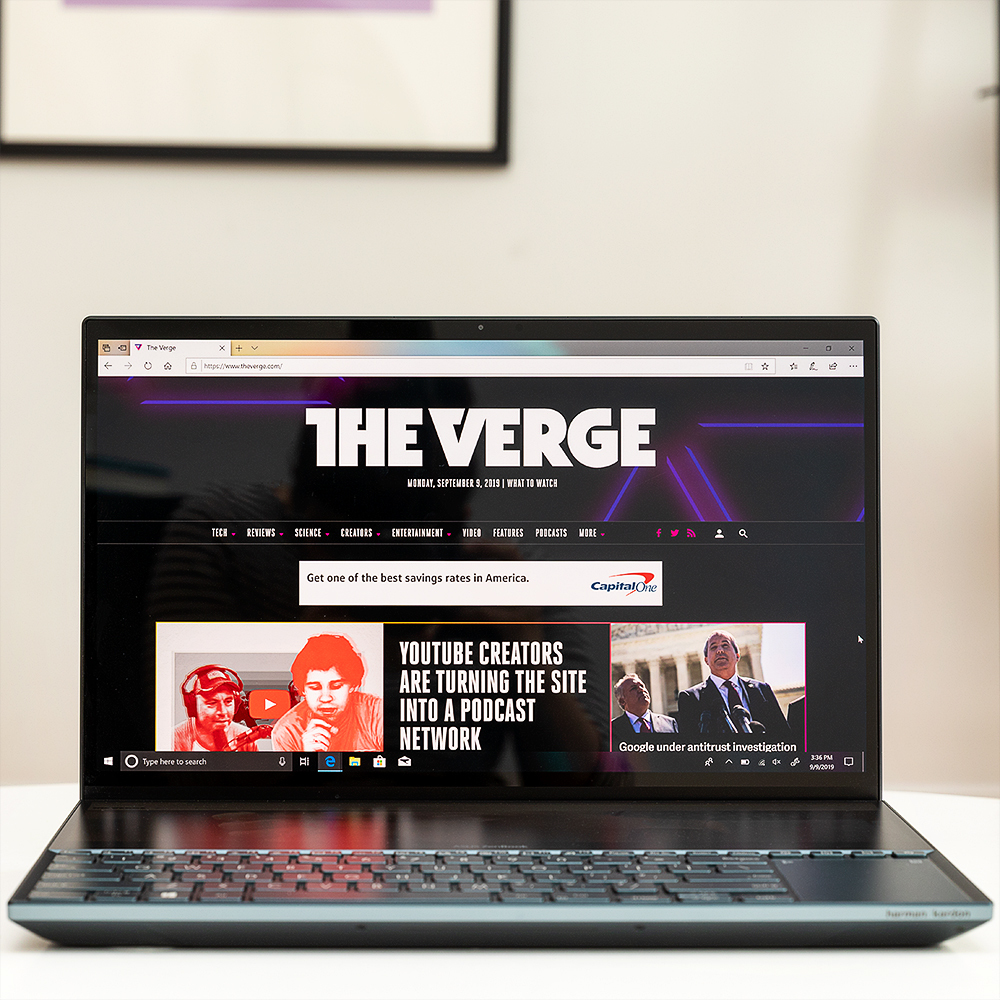 Before I talk about what it’s like to use the ZenBook Pro Duo’s dual screens, let me first dive into what they are. I tested the top-tier model, a $2,999 machine with the crème de la crème specs to match: Intel’s best Core i9-9980HK laptop processor, 32GB of 2,666MHz DDR4 RAM, an Nvidia RTX 2060 GPU, and a gorgeous 4K OLED panel for the main display.

The design is similar to Asus’ original ROG Zephyrus gaming laptop: there’s a front-loaded keyboard and an effectively useless trackpad, and a massive expanse above it. But instead of wasting that space on a fancy ROG logo, Asus has filled it with a second 14-inch, 32:9 aspect, IPS “ScreenPad Plus” display.

There have been a lot of comparisons drawn between the ScreenPad Plus and Apple’s controversial Touch Bar since both are secondary laptop displays nestled above the keyboard. While you can use the ScreenPad Plus as an oversized control bar, that’s not the real purpose of it. It’s more akin to Asus’ first, touchpad-replacing ScreenPad hardware where the goal is to offer a full-fledged secondary laptop screen — only this time, it’s not just a cute gimmick.

I’ll admit, I was skeptical when I first started using the ZenBook Pro Duo. Compared to the vibrant main display, the thinner ScreenPad panel looks painfully small and dull-colored, and it was impossible to imagine getting any real work done with it. But as I used it more, I discovered that getting “real” work done isn’t the point. The point is to offload all the other distractions onto it, like Slack, Twitter, Facebook Messenger, Spotify, or Gmail, leaving the entire expanse of that 15.6-inch OLED panel for unfettered productivity.

When everything works right, moving things down to the ScreenPad Plus is as simple as dragging a window down to an external display (with the difference, of course, being that the display isn’t really “external” here). Asus also has some custom software that will offer a drag-and-drop hot spot when you’re moving a window around to automatically send it to the lower display. Lastly, there are physical hardware buttons that allow for quickly swapping the entire contents of the upper and lower screens or to disable the ScreenPad Plus entirely.

My usual setup when working with the ZenBook Pro Duo was to have my top display fully engaged with whatever task I was doing (like, say, writing this review), with Slack, Twitter, and iTunes windows open on the ScreenPad. That way, they’re out of the way enough that I could focus, but they’re right there for quick glances to make sure I wasn’t missing anything important.

It’s great for entertainment, too: I could put a full-screen Netflix or YouTube video up on the main panel, while still being able to browse social media, chat with friends, and even look up the name of that actor I couldn’t remember without messing up the stream.

Due to the awkward aspect ratio of the ScreenPad Plus, using it for multiple apps at a time is practically essential. Having three windows open tended to be my preferred solution, with two at an absolute minimum. Put a single window down there and maximize it, and it looks sort of ridiculous, no matter what content it is. The downside is that if you are splitting your display into three, you’ll also need to shrink the font down to get any usable amounts of text.

The whole setup is surprisingly useful

It’s not perfect by any means. I ran into issues where the ScreenPad would just plain not turn on when waking the laptop, and the software that Asus uses to manage apps and windows isn’t quite there yet. I had frequent issues where windows would lose their set widths or fail to snap to their locations or Asus’ launch just refused to close.

I’m also not sold on the ergonomics of the ScreenPad. Even with the extra few degrees that the screen hinge (which lifts the entire back of the base of the laptop off a desk) provides, it’s just plain difficult to read the frustratingly flat display, especially if your office has a lot of overhead lighting. I often found myself craning my neck and upper body over the laptop just to read a Slack message, which probably isn’t the best thing for my posture.

I’m not sure what a good solution is here: raise the angle even higher, and the keyboard becomes impossible to use, even with an included palm rest. Maybe something like Intel’s wild dual-hinge Honeycomb Glacier concept is the answer. But so far, no company has made a production laptop like that yet. Still, it’s an intriguing way to use a laptop, one that I hope other companies will continue to explore going forward.

Of course, the ZenBook Pro Duo isn’t just a pair of fancy screens; it’s also a high-end laptop. Unfortunately, take away the gimmick of the second display, and the rest of the computer isn’t that impressive.

From a raw power perspective, the ZenBook Pro Duo should have processing room to spare for all but the most intensive of power users and gamers. The i9 chipset and 32GB of RAM were more than enough for any day-to-day tasks, and outside of professional-level CAD rendering or video editing, it’s unlikely you’ll have too many issues.

More of a mobile desktop than a laptop

But that power comes at a big cost — specifically, battery life and general portability. The ZenBook Pro Duo made it just over two and a half hours unplugged under the brunt of my normal, Chrome- and Twitter-heavy workload at full brightness. (Trust me, it’s practically a crime to not push this 4K display all the way up.) Users with more demanding workloads, like video or photo editing, will likely find that time cut even shorter.

Despite the “laptop” name, the raised-up design, overall size, and front-loaded keyboard make the ZenBook Pro Duo plain uncomfortable to use on your lap for anything beyond a few minutes. And the 6.4-pound weight means that you won’t be rushing to sling it into a bag, either. It’s very much a computer in the “portable desktop” category rather than a truly mobile device.

I haven’t disguised for my dislike of front-mounted keyboards, and the ZenBook Pro Duo continues that trend. Like its brethren, it’s painful to type on without using the bundled palm rest, and the minuscule trackpad (while thankfully using Windows Precision drivers) is best replaced as soon as possible by a real mouse.

The port selection is also surprisingly anemic for such a big (and expensive) machine: just two USB-A ports, a USB-C Thunderbolt 3 port, an HDMI port, and combined headphone / mic port. There are no SD card slots to speak of, which seems like an odd oversight on a computer this expensive that’s so focused on creative work. And given the sheer size of the ZenBook Pro Duo, it feels like Asus could have found space for more I/O options.

Then again, maybe Asus couldn’t fit any more ports, given how much space on the sides of the laptop is taken up by vents for the massive amount of heat it pushes out. Asus is using all its tricks here: tons of venting, a special turbo mode for pushing the fans to the maximum, and even a design that lifts up the base of the laptop by using the bottom of the display to prop it up to let more airflow in.

But for all that, the ZenBook Pro Duo still runs hot. Between the top-tier processor, beefy graphics card, and, of course, the sheer amount of pixels it has to push between the two constantly running displays, there’s always a lot going on. A word of advice: keep cold cans out of the line of fire, lest you discover that your refreshing seltzer has turned uncomfortably hot.

While it’s not designed primarily as a gaming machine, the ZenBook Pro Duo does check most of the boxes with its beefy processor and plentiful amounts of RAM. The biggest bottlenecks here are the RTX 2060 GPU and the 4K display. While you technically can game at 4K on the ZenBook Pro Duo, frame rates take a big hit unless you’re willing to turn graphics down to medium. 1080p gaming fares better, but if gaming is your focus, you’ll be better off investing in a full-fledged gaming PC with a more powerful GPU and more gaming-appropriate high refresh rate display.

The bigger issue with gaming has more to do with how Windows handles full-screen games by default, which has the unfortunate side effect of neutralizing the ScreenPad Plus. I went into this thinking that gaming could be the killer app for the second display — imagine being able to put up a YouTube guide for a level while you play, keep your friends’ Discord open and accessible, or even the ultimate all-in-one portable streaming machine.

Unfortunately, most PC games aren’t designed to work like that. You can run them full-screen and keep things running in the background on the second display, but if you click or tap on them, the game will minimize away. Presumably, this is a solvable issue (I managed to cheat my way around by running games in “windowed” mode at a full-screen size), and as mentioned before, streaming video does this perfectly already. It’s just another place where Asus’ software feels like it’s not quite there yet.

As a complete package, I’m still not sure the ZenBook Pro Duo is a good computer. Between the $2,499 starting price and the glaring issues with ergonomics and practicality, it’s a tough sell as anything other than a very cool idea.

But the ZenBook Pro Duo did sell me on the idea of a second display on a laptop, even if it doesn’t quite manage the execution just yet. It’s a first-generation product of a radical new way to use a computer — so of course Asus doesn’t have all of the pieces solved just yet. Presumably, the next generation of the ZenBook Pro Duo will improve, as will other dual-display laptops with different screen sizes and form factors over time. There is a great laptop buried within the raw clay of the ZenBook Pro Duo. Hopefully, Asus (or another company) will take the time and effort to find it.