It’s not the fastest mesh system, but it’s one of the easiest to use

Share All sharing options for: Eero’s latest router system is simple to use and less expensive than before

Mesh Wi-Fi systems have become increasingly popular over the past few years, with Eero leading the charge. A mesh system is different from a traditional Wi-Fi router in that it uses multiple nodes or access points spread throughout your home to provide better coverage than a single router located wherever your broadband connection comes into your house. These systems aim to blanket your home in Wi-Fi signals, so you can still access the internet on your devices whether you’re down in the basement or up in a third-floor bedroom, far from your main router.

Eero can be credited with popularizing this kind of router system when it released its first product back in 2016. Since then, the market has exploded with options, and Eero has moved from being an independent company to being part of Amazon’s sprawling portfolio of hardware companies. The company now has a faster second-generation system and a new, lower-tier system that starts at just $99.

I’ve been testing this lower-cost Eero for the past couple of weeks in my own home, comparing my experiences with it against Eero’s other products and many of the other mesh router options available to purchase. To put it simply, this latest Eero is just as easy to use and as good at blanketing your home in a strong Wi-Fi signal as the prior models, but it’s not the fastest option you can get. Still, for the majority of people just looking to get a stronger Wi-Fi signal in more parts of their home, the new Eero gets the job done and costs less to boot.

Our review of Wifi System 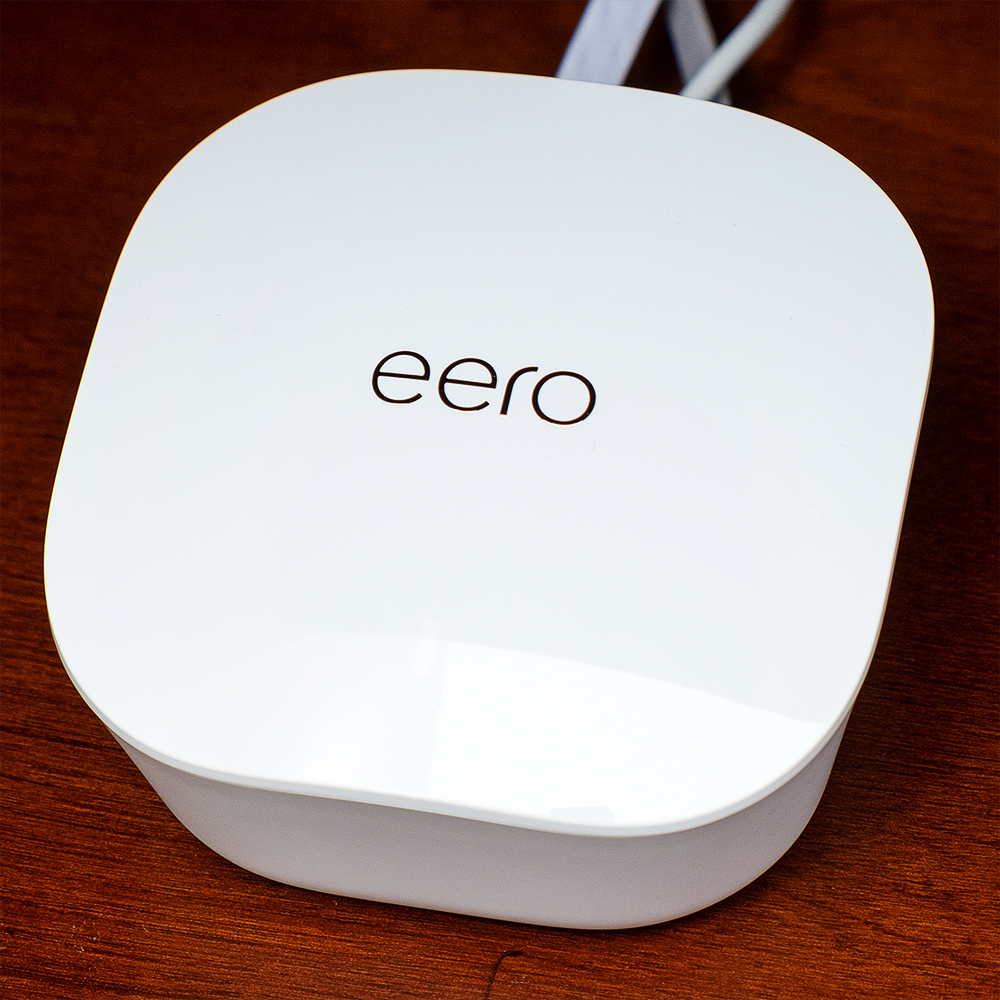 The latest Eero is available as a single unit for $99 or as a three-pack for $249. That’s not cheap, but it’s much lower than Eero’s previous $399 entry price, which got you an Eero Pro and two plug-in Eero Beacons, making it more in line with some of the other lower-end mesh systems that are now available. The company recommends a single unit for homes up to 1,500 square feet, while the three-pack can cover up to 5,000 square feet. I tested a three-pack in my roughly 2,000-square-foot split-level home, with one unit on the main floor plugged into my Verizon Fios gateway, a unit in my bedroom on the upper level, and a unit in my home office on the lowest floor.

Hardware-wise, the new Eero is internally identical to the Beacons released in 2017, but it lacks a nightlight and the ability to plug into the wall directly, which makes it easier for Eero to sell it internationally. It has a slightly smaller footprint than the original model or the Eero Pro gateway, and it offers two 1 Gbps Ethernet ports, which the Beacon lacks. Those are useful for plugging in devices such as desktop computers or smart home hubs or for using existing Ethernet wiring in your home to link the units.

The new Eero provides 2.4GHz and 5GHz networks simultaneously under the same network name. It has 2x2 MIMO antennas for both frequencies, but it lacks the third 5GHz band used by the Eero Pro to provide a faster link between the nodes. In practice, that means the cheaper Eero will provide slower maximum speeds when you’re connected to the mesh nodes than you’d get from using Eero Pro units.

That was borne out in my testing. When my devices were connected to the primary unit (the one plugged into my Fios gateway), I was able to hit speeds of over 400 Mbps for both upload and download. (I have gigabit service from Verizon, which promises speeds up to 940 Mbps down and 880 Mbps up.) But when my devices were connected to the nodes in my home office or bedroom, my maximum speeds were less than half of that. If I had a larger home and had to use even more units to cover the area, the speed falloff would get worse with each additional hop between mesh nodes.

Half of 400 Mbps is still plenty fast for anything I really need to do on Wi-Fi, including streaming 4K HDR video to multiple devices at the same time. Most people don’t have nearly the amount of bandwidth I have — average home broadband speeds in the US are under 100 Mbps — so the Eero is fast enough to full advantage of a standard connection. But if you do happen to have gigabit internet or really anything faster than a few hundred megabit service, you’ll be losing a lot of the speed with the Eero that you could get from a faster mesh Wifi system, such as Netgear’s Orbi, Nokia’s Beacon 3, or even an Eero Pro.

Eero is a different company since the last time we reviewed its products, as it is now a part of Amazon and no longer independent. Still, Eero says it has not changed its privacy policy since the acquisition and it will not be collecting more data or sharing the data it does collect to improve performance, security, and reliability with other parts of Amazon.

Setting up the Eero system requires the use of the company’s mobile app. To use the app, you must create an Eero account and agree to:

Raw speed isn’t the only thing that matters with a mesh router system, though. It also needs to provide coverage throughout your home while managing devices hopping from node to node without dropping connections. As with Eero’s prior systems, the latest model does an excellent job with both of these things, providing a Wi-Fi signal everywhere I go in my home, even outdoors on my patio and in my driveway. It also does an excellent job of keeping my connections stable as I move from room to room, transitioning my devices from one node to another as appropriate. Finally, it was able to handle a demanding load of nearly 50 simultaneously connected devices without choking or dropping devices from the network.

Eero also has an excellent mobile app, which is necessary for setting up the system and managing it once it’s up. You can easily see how many devices are connected to your network, turn on and off guest networks, manage profiles for family members, and remotely restart the network should something go wrong.

The basic Eero system also supports the same subscription service as Eero’s higher-end routers, which provides ad-blocking and extra security features for a monthly fee. Eero also has expanded its integration with Amazon’s Alexa voice assistant (Amazon purchased Eero earlier this year), allowing you to control various features via voice commands to an Echo speaker. I’ve never found any of these features to be particularly useful, however, and I didn’t make use of them in my testing.

Overall, the main draw of the new Eero is the ability to get all of those features and experiences at a lower price than before. At $100 for a single unit or $250 for the three-pack, the new Eero is a much easier system to jump into than the $400 Eero Pro and Beacon kit. It’s also compatible with all of the other Eero devices, so as your needs grow over time, you can upgrade the slower nodes to Eero Pro units piecemeal. You can also use the new Eero in existing Eero networks to add more coverage or provide Ethernet ports in rooms that aren’t wired for them.

The only truly new thing about the latest Eero is its lower price, which is perhaps the best feature new customers care about.