Plus, there’s a new less expensive option that’s only slightly dialed down in terms of capabilities

Master & Dynamic has two new sets of truly wireless earbuds for 2019: the MW07 Plus, a direct follow-up to last year’s MW07, and the MW07 Go, a brand-new $199 entry that will appeal to those who are looking for a slightly more affordable set of wireless earbuds.

The MW07 Plus buds headline M&D’s pair of announcements, and at $299, it’s the same high price as the original MW07. Based on looks alone, it might appear that not much has changed. Each ear piece is still capped in a premium pearlescent design, and they ship in a heavy, glossy stainless steel case that looks luscious when it’s brand new, but will almost certainly get scratched up when it’s not tucked into the included cloth pouch. M&D states that these use the same 10mm beryllium drivers from the previous model (which are still fantastic), but a few new features might make their high price an easier sell.

These support active noise cancellation, activated by tapping and holding the volume up button on the left earbud. They also feature an ambient listening mode to let you hear what’s happening around you, switched on by pressing the volume down button for a few seconds. In the few days that I was able to test out the MW07 Plus, both features made the experience better than before, and surprisingly, neither negatively impacted the sound quality.

Our review of Master & Dynamic MW07 Plus 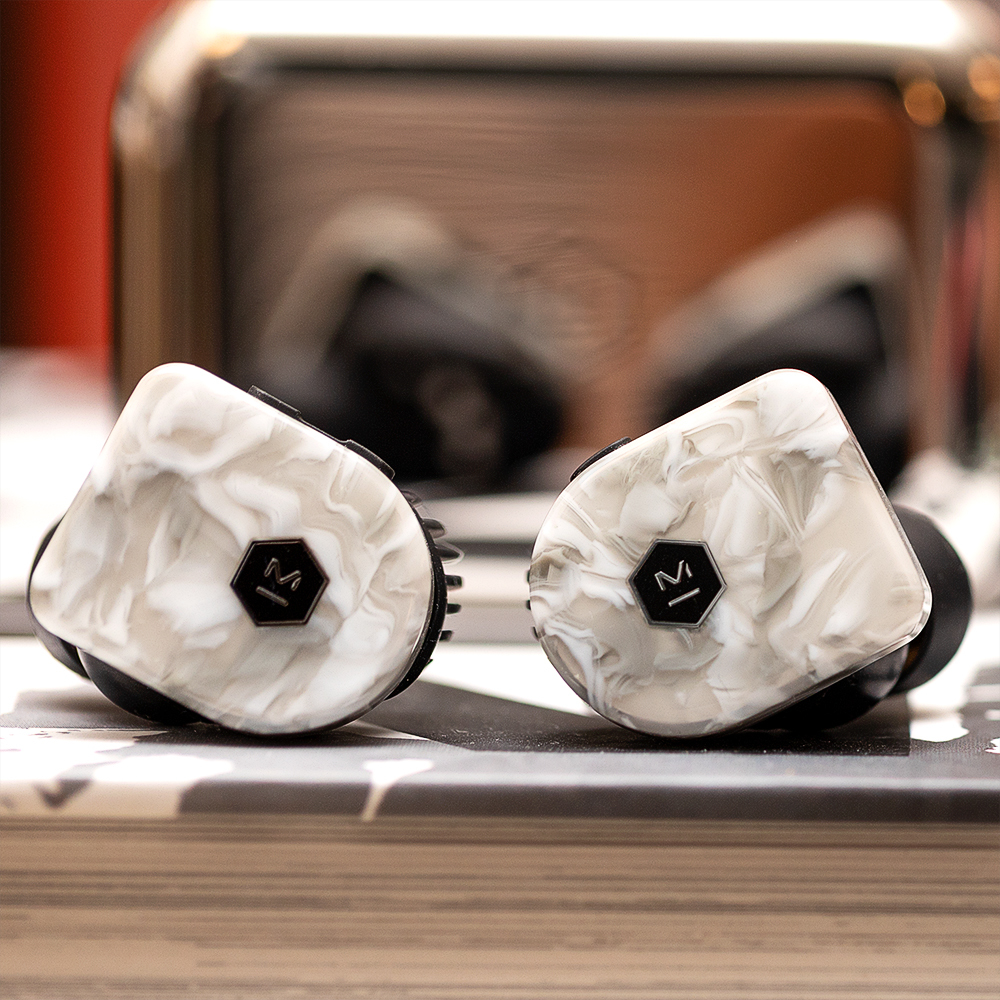 Granted, these features aren’t as robust in their ability to isolate you from your environment like what you’d experience in a set of over-ear headphones, but they’re effective enough at dampening most of the debilitating whirring and grinding of trains passing through a subway station. They also do a good job of silencing chatter and clattering train noises when I’m on my commute so I can focus on my music, or so I can focus on a book with some silence when my music is paused. I haven’t been on a flight with these earbuds yet, so I can’t speak to how they’d hold up on a plane. But short of using them to get sleep, the noise-canceling effect seems sufficient enough to at least hush the whir of airplane engines while you’re watching a movie or listening to music. Part of why the noise cancellation works so well here may be because M&D doubled the amount of microphones in the MW07 Plus to four.

I’ve used M&D’s over-ear headphones before, and one of the things that I enjoy most about them is their attack. They aren’t going for a balanced, neutral sound. Instead, music sounds energized, with the mids and highs seemingly amped up in unison to make for an exciting listen. Surprisingly, very little from that sound profile has been lost in translation to the truly wireless headphones form factor. My favorite songs are richly presented, and again, the noise-cancellation feature is surprisingly effective at dimming down some of the ambient sound — even in the subway.

One of the things that I don’t necessarily enjoy is their design. While Google and other companies are racing to make truly wireless headphones that disappear in your ears, M&D seems to be doing the opposite. Both the MW07 Plus and Go resemble hefty in-ear monitors used in the studio or onstage. Their outside casing is flat, thankfully, but it still looks like a serious bit of hardware is hanging out of your ear. There are some upsides to the design. M&D made both of these headphones in multiple colors (the Plus’ options are all pearlescent, while the Go’s are rich pastel colors), so you can pick your favorite if you buy them. Additionally, they’re much more comfortable than their appearance might indicate. There’s a large assortment of ear tips and ear fins included, and after a few attempts, I was able to find a comfortable fit that makes a good seal and doesn’t push too hard on my cartilage.

The design is divisive, but a few of its other improvements are great. The MW07 Plus buds have vastly improved battery life, both in the earbuds and in the included charging case. M&D claims that you’ll get 10 hours of battery life per charge, and the case can recharge them fully three more times, totaling 40 hours of playback (compared to 10.5 hours total in the previous generation’s case). I’ve been testing them for the past week during work days, on my commutes, and around town on errands, sticking the buds back in the case to charge them after each listen, and I haven’t had to recharge the case yet.

The colored LEDs on the case indicate how much battery life remains (green means good, orange is medium, red is low), and the case has delivered something very close to its 40-hour claim, and that’s a huge improvement. It maintains the USB-C port from last year, so you can use the same cable as your laptop or phone to charge it back up. The case’s lack of wireless charging support is a much bigger issue now than it was when the original MW07 released. Several less expensive options include wireless charging, so it’s disappointing not to have it here.

They cost a premium, yet they lack some premium features available in less costly alternatives

The list of improvements in the MW07 Plus is long, and there are a few more that you should know about. They are rated IPX5 (the MW07 were IPX4), so they should hold up well to sweat, as well as rain if you get caught up in a brief shower storm. This model has Bluetooth 5, allowing for longer range (up to 100 feet), and they support Qualcomm’s aptX codec. Lastly, you can use either the left or right earbud independently for playback or phone calls. The MW07 model was limited to just the right earbud if you needed to use just one.

Our biggest complaint about last year’s MW07 earbuds was their price, and we argued that even though they provide better sound quality than most of the competition (at least, back in mid-2018), the value just didn’t pan out. It might seem puzzling that Master & Dynamic kept the same price with the MW07 Plus, but it considerably fleshed out what’s on offer. However, not everything is great. These only allow you to pair them with one device at a time, and their high $299 price makes cheaper, similarly capable options more appealing, like Sony’s WF-1000XM3 (I can’t believe I’m referring to $229 headphones as cheap). You don’t have to pay $299 to get good noise cancellation, a USB-C charging case, and excellent sound quality, but it’s a worthy investment if you value a stylish presentation.

The other new set of M&D earbuds address the price complaints more directly. The MW07 Go are $100 cheaper than the new model or last year’s version, but they make some clever compromises to reach that lower price point. The stainless steel case is replaced with a smaller case that’s clad in woven fabric, somewhat like Google’s original Pixel Buds. Physically, the MW07 Go are a smaller set of buds than the Plus, but largely look the same, down to the button location and the same 10mm drivers. They don’t have proximity sensors, which allow the high-end MW07 Plus to automatically resume or pause music when you put them in your ears.

(Note: Master & Dynamic provided a production sample of the MW07 Go to The Verge, and noted that they lack a few quality-of-life tweaks that M&D promises in the final product. However, not having them didn’t impact my overall experience, and I don’t expect my feelings to change much once the headphones hit shelves. I’ll be testing the final product once M&D provides it, and if any discrepancies pop up, I’ll be sure to note that.) 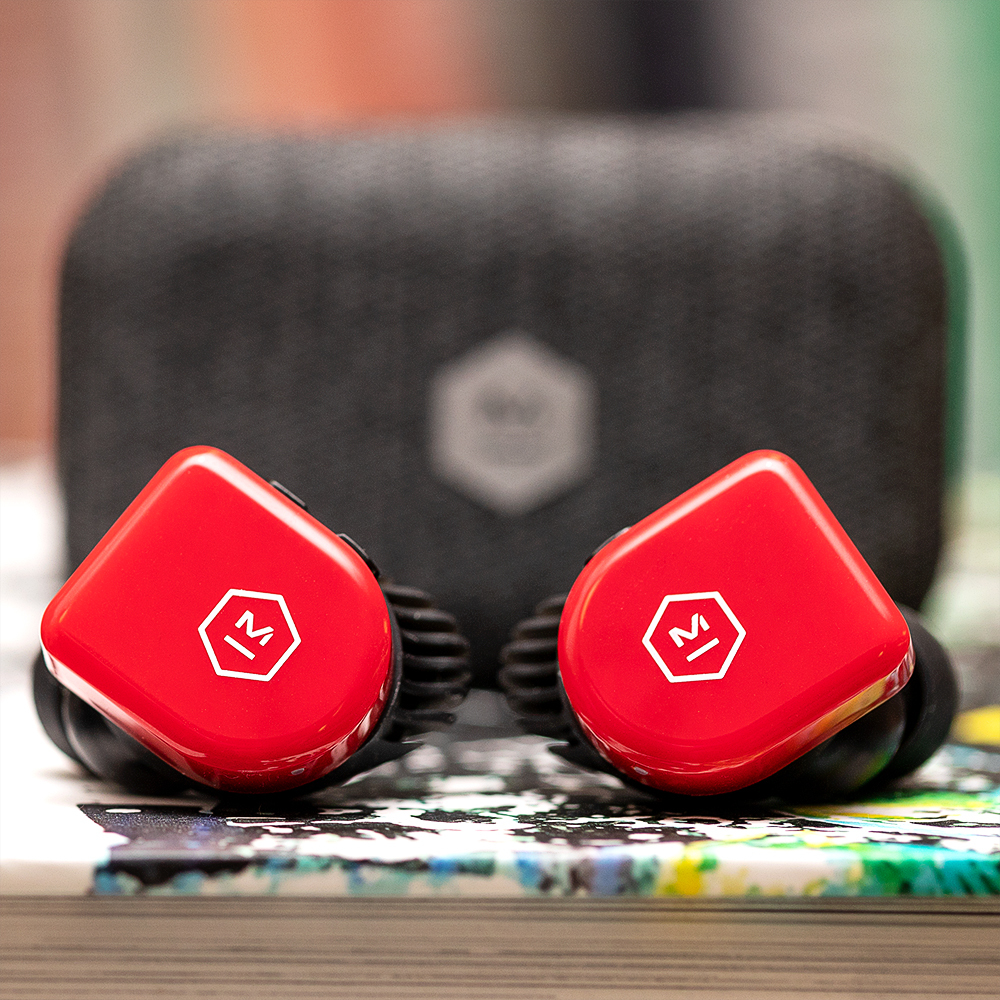 Given that the case is smaller, its battery capacity takes a hit compared to the Plus. It has just a 12-hour capacity, allowing it to recharge the Go from empty only once (with a little juice left over). Fortunately, the Go’s playback time is 10 hours per charge, just like the high-end model.

As for what the rest of the MW07 Go earbuds offer, only some of it’s on par with the Plus (Bluetooth 5.0 support with aptX codec). These have fewer microphones than the Plus, they lack the ambient listening mode and active noise cancellation, and only the right earbud will work independently. If you’re not someone who has to drown out a lot of noise, these might be a suitable option for you. The sound quality is just as good as the MW07 Plus, but for $100 less.

Like the MW07 Plus, the Go can only pair with one device at a time, which is frustrating if you regularly move between a phone and tablet or laptop and want your headphones to come along for the ride. But compared to most other non-AirPods, these offer specs and capabilities that are on par with, and in some cases, better than, other options. Compared to the Jaybird Vista earbuds, these are similarly priced, have longer battery life per charge, and their aptX codec support runs laps around the Vista’s lousy SBC support. But given that the Jabra Elite 75t and Amazon’s Echo Buds are about to launch, those perks may not set M&D’s new MW07 Go apart for long.