Amazon Echo Dot with clock review: time is on its side

A $59 clock that also comes with a pretty good speaker

By Cameron Faulkner@camfaulkner Oct 22, 2019, 10:00am EDT
Photography by Chris Welch

Share All sharing options for: Amazon Echo Dot with clock review: time is on its side

“What time is it?” I feel dumb wasting my breath to ask this question out loud to my all-knowing smart speakers, but it’s the question that I ask the most — and I’m not alone. Amazon says it’s one of the most commonly asked questions to its Echo smart speakers. So the new Echo Dot comes with a built-in clock that saves me some of that grief. It’s a simple addition: some LEDs embedded under the Dot’s fabric-coated rim that can display the time all of the time.

The $59.99 Echo Dot with clock (yes, that’s the real name) is a 360-degree omnidirectional speaker, and the only thing that makes it different from last year’s Echo Dot are the LEDs that occupy a small area on its front, opposite the power plug, facing you head-on. In addition to telling the time, it can also display info to complement a few other basic verbal requests. If you ask for the temperature, it will briefly show the current temperature in place of the time while Alexa’s voice provides a more detailed breakdown of the weather. If you set a timer, this Echo Dot will show you a countdown clock, which is great because it reminds you that, no, you didn’t forget to set a timer for your cookies in the oven. One other great feature is that, after setting an alarm, a little dot will appear next to the time to remind you that it’s set. 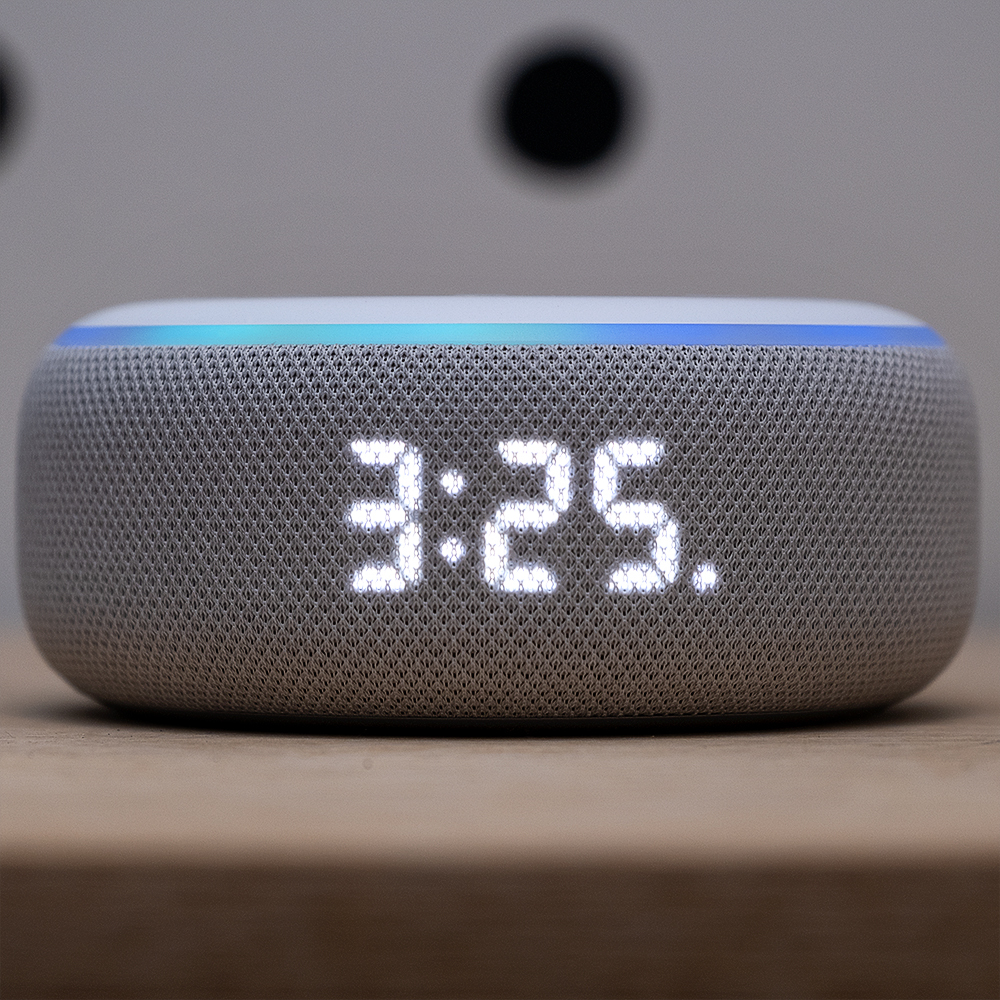 Amazon makes several Echo smart displays and smart speaker devices, and so far, the divide between the two has been distinct: if you want to look at stuff on a screen, get the Echo Show. But if you want to hear stuff, save some of that money and just get an Echo speaker. The new Echo Dot with clock ever so slightly blurs the line between the two. Adding a clock to a speaker is such a basic addition, and it’s by no means alluring to look at, but that’s the point. It’s meant to reduce the friction that can sometimes bubble up while using a display-free device. Beyond being a nice quality-of-life tweak, this visual info is a useful accessibility feature that makes Amazon’s most affordable Echo easy to recommend if you hate asking your smart speaker for the time.

As I mentioned, nothing else about this new Echo Dot has changed, but that’s not such a bad thing. It has the same living room-friendly charm as the third-generation speaker that released last year. It technically is a third-gen Dot, just with a clock. Like the other Echo speakers, this one has the signature blue ring of LEDs around its top that illuminate when Alexa is beckoned. Amazon didn’t take the year between releases to improve the sound quality at all — at least, not in a noticeable way. This speaker still sounds good for its price, though it’s now up against some improved competition, namely Google’s new second-generation Nest Mini.

The Amazon Echo Dot’s side-firing speakers push out decent sound when it’s set on a table, unlike the Nest Mini’s upward-firing speakers, which sound comparatively flat sitting next to it. If you just want a speaker that lays on your desk, kitchen table, or countertop, Amazon’s speaker is the preferable choice. Also, this is the mini smart speaker to buy if you want a 3.5mm audio jack that allows you to plug into a more powerful sound system.

Both speakers support Bluetooth for pairing up a phone or connecting to a better-sounding Bluetooth speaker if you’d prefer just to use the Echo Dot for voice commands. The biggest downside to Amazon’s speaker is that, unlike the Nest Mini, it can’t be easily mounted to your wall, and judging from its speaker arrangement (as well as the clock), it just isn’t engineered to accommodate being flat on your wall. When Google’s speaker is mounted, that upward-firing speaker turns into an outward-firing speaker, and it results in a big lift for its sound output, offering warmer and more expressive sound pushed out at eye-level.

The clock is by no means alluring to look at, but that’s the point

As my colleague Dan Seifert noted in his review of last year’s Echo Dot, you can buy two of them and pair them for proper stereo playback. They can pair wirelessly via the Alexa app, and you can tweak their sound settings (bass, treble, and midrange) verbally or through the Alexa app. If you go this route, you’ll probably want some extra power in the bass department. Amazon sells the Echo Sub for $129, and it’s a suitably compact and somewhat affordable way to bring the bass to your setup. But for the $250 you’ll spend for this whole setup, you’re probably better off getting the Echo Studio instead, saving $50.

Here’s what you might be thinking at this point: having two Echo Dots in the same room displaying the time will look pretty stupid. The good news is that you can customize its display through the app or verbally. As far as settings go, you can adjust the brightness and whether it’s on or off, in general. The speaker has an ambient sensor that automatically adjusts the display’s brightness depending on the amount of light in the room so that it’s not too bright at night or too dim during the day. It’d be better if Amazon offered a scheduling tool for the display, but the ambient sensor works well enough.

In order to use the Echo Dot with clock, you’ll need to download the Alexa app for iOS and Android. An Amazon account is required to sign in. By signing up for one of those, you must agree to its conditions of use.

You can explore the documentation at that link, but below, we’ve listed the 12 terms that you must agree to.

Even though the Amazon Echo Dot with clock works off of last year’s speaker technology, the addition of a clock is as convenient an upgrade as you might expect. A feature like this lets me get on with my life without having to ask life’s most mundane queries, then wait for Alexa to reply. And since I’m better at absorbing visual information than I am with auditory cues, seeing the time sticks in my mind more so than hearing Alexa rattle it off.

Amazon thinks this added convenience is worth an extra $10 over the regular price of the third-generation Echo Dot, which it somewhat confusingly continues to sell. If you’re thinking of upgrading, there are cheaper ways to get a clock in your home. And if you wait, it’s highly likely that Amazon will discount it in time for the holidays. But considering this clock just so happens to come with a good speaker and an intelligent voice assistant makes $59 seem like a reasonable cost.