Microsoft’s latest Surface Laptop isn’t without faults, but it is a very good computer

Share All sharing options for: Microsoft Surface Laptop 3 13.5-inch review: have a normal one

Microsoft has given us more choices than ever with its Surface products this year. If you want a 2-in-1 tablet, you can now choose between a Surface Pro 7 or a Surface Pro X. If you want a traditional clamshell laptop, you can now choose between a 13.5-inch Surface Laptop 3 or a larger 15-inch model. I’ve already taken an in-depth look at the latter Laptop 3, so in this review I’m focusing on the 13.5-inch Surface Laptop 3.

The $999 ($1,599, as tested) 13.5-inch model is the more “traditional” Laptop 3, and I think it’s the one that most people should get if they are looking at buying one. It has an outstanding keyboard and trackpad; a sharp, bright touchscreen; a sleek design and sturdy build; and excellent performance for everyday productivity tasks, which is what you’re most likely to use a 13-inch laptop for.

The Laptop 3 isn’t without faults, however, and you can get better battery life and better port selection from other 13-inch Windows laptops, such as Dell’s XPS 13 or HP’s Spectre X360. It also has the occasional bug that will cause things to go haywire until the laptop is shut down and rebooted. Still, if those things aren’t deal-breakers for you, the Laptop 3 is an excellent, traditional Windows 10 laptop.

Our review of Microsoft Surface Laptop 3 13.5" 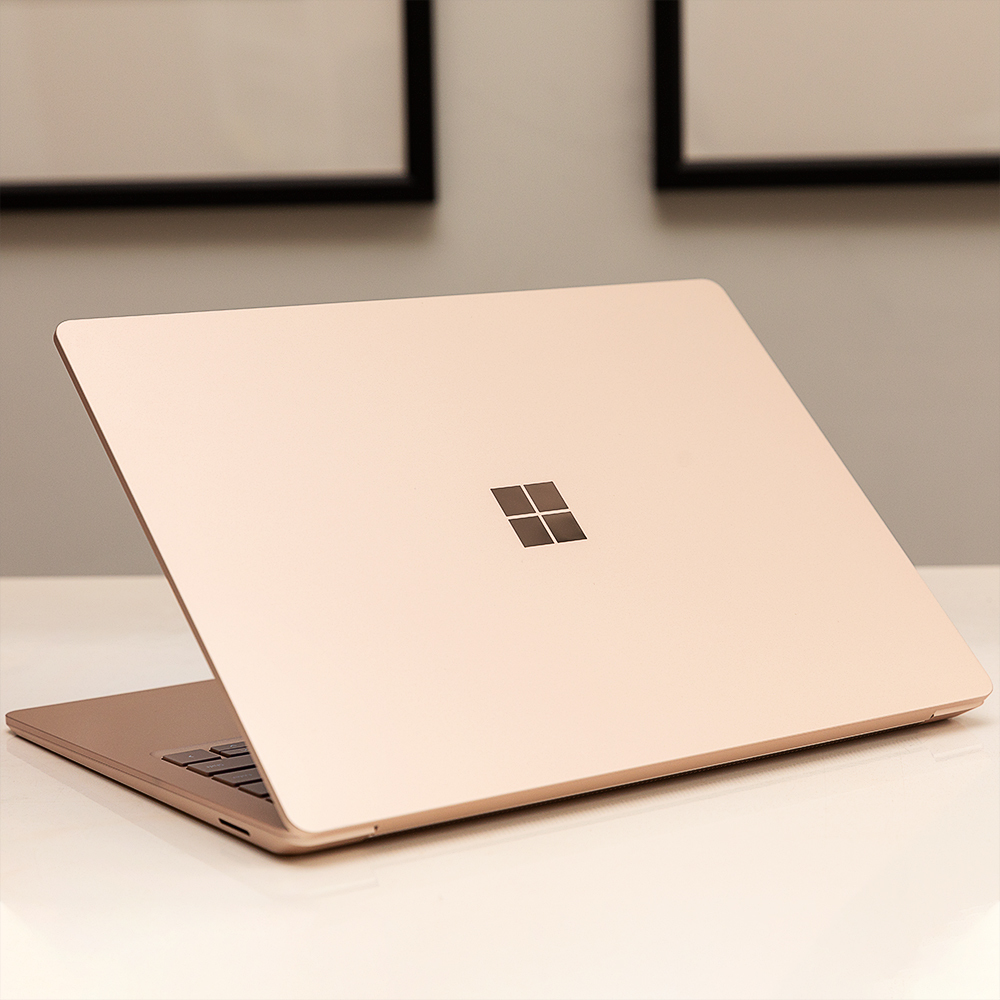 As with other Windows 10 computers, the Surface Laptop 3 presents you with multiple things to agree to or decline upon setup.

The mandatory policies, for which agreement is required are:

In addition, there are a slew of optional things to agree to:

Microsoft didn’t change much with the Laptop 3’s external design over the prior models — it’s still an aluminum clamshell laptop with a slightly wedged shape that’s easy to slip into a shoulder bag. The 13.5-inch model weighs 2.89 pounds, which puts it between the MacBook Air’s 2.75 pounds and the MacBook Pro’s three pounds. It’s not the lightest 13-inch laptop you can get, but it certainly isn’t cumbersome.

There are two notable changes with the design, however. Firstly, the Alcantara cloth deck that has been the signature of the Surface Laptop line is now optional depending on which color you get. It’s present on the silver and blue models, but is replaced with a much more traditional aluminum keyboard deck on the gold and black models.

I’ve been testing the gold version (which Microsoft calls “sandstone,” but I’m a human so I call it gold), which looks very nice and doesn’t pick up fingerprints and grease like the black model does. I do miss the Alcantara though — the aluminum deck is nice, but it just kind of feels like every other aluminum laptop and doesn’t have that soft touch the Alcantara provides. But if you were concerned about the Alcantara’s durability, you now have an option to avoid it. (You’ll have to pay at least $1,299 to get a different color, though, as the $999 base model is only available in silver and comes with the Alcantara fabric.)

The other change Microsoft made was swapping the ancient Mini DisplayPort for a USB-C port, which is probably what should have been on the first version of the Surface Laptop in 2017. You can use the USB-C port to charge the laptop (in addition to the Surface Connect port on the opposite side), hook up an external display, or use various USB-C accessories like a hub. Unfortunately, it does not support Thunderbolt 3 speeds, so you’re limited to USB-C 3.2 (10Gbps) devices and can’t use it with an external GPU, faster external SSD drives, or a Thunderbolt desktop dock. Most other laptops in this price and size range do support Thunderbolt 3, so it’s frustrating that the Laptop 3 doesn’t.

Aside from the new USB-C port, the other I/O on the Laptop 3 is a single USB-A port, a 3.5mm headphone jack, and Microsoft’s proprietary Surface Connector, which connects with 65-watt charger that comes in the box.

Microsoft has done some work to make this generation easier to service and upgrade than prior Surface Laptop models, but that doesn’t mean you can just crack the Laptop 3 open and get to upgrading. The only part that actually can be swapped is the SSD and Microsoft says it’s not user-replaceable — you’ll have to take the Laptop 3 to an authorized service center to get the work done.

The 13.5-inch touchscreen display is unchanged from prior models, and it maintains the signature 3:2 aspect ratio found on all Surface devices. It’s bright and sharp, with good viewing angles and punchy colors, and I really love the taller aspect for working in documents or reading websites. There is some letterboxing when I watch wide-screen videos in full-screen because of it, but for everything else I do on a laptop, this aspect ratio is better than the traditional 16:9 screen.

I also appreciate the fact that it’s a touchscreen, even if this isn’t a 2-in-1 convertible and it’s not the primary way I interact with the laptop. Being able to casually reach up and tap the screen is a convenience I miss when I use laptops that lack touchscreens.

One thing that has bothered me during my test period is the erratic behavior of the display’s auto brightness function. It will randomly lower the screen’s brightness to uncomfortable levels from time to time before raising it again a couple of minutes later. This happens with the laptop in a stationary position and none of the lighting changing.

Like the 15-inch Laptop 3, the 13.5-inch model has an outstanding keyboard, with excellent spacing, travel, and feedback. It’s perhaps my favorite laptop keyboard I’ve used in a long time. Similarly, the trackpad, which is 20 percent larger than one on the Laptop 2, is smooth and easy to use, with great tracking and palm rejection. This keyboard and trackpad combination is the best you can get in the Windows world and shows Apple how a laptop keyboard should be done.

Inside, the 13.5-inch Laptop 3 has Intel’s latest 10th Gen Ice Lake quad-core processors, with either Core i5 or i7 options. I’ve been testing the Core i7 (i7-1065G7, to be specific) model and it has excellent performance for any productivity task you might want to accomplish. It’s also competent enough to handle Lightroom and Photoshop, and doesn’t have any issues playing back 4K video, like I saw with the 15-inch model’s AMD processor. (You can apply these performance results to the Intel version of the 15-inch model that Microsoft is selling to businesses, as it uses the same processor as the 13.5-inch model.)

In fact, the 13.5-inch model was significantly more capable than the 15-inch version when it came to exporting a 5 minute, 33 second 4K H.264 video out of Adobe Premiere Pro. The 13.5 was able to chew threw that job in just 15 minutes and 26 seconds, compared to the over 3 hours the 15 would have taken. That’s even faster than an older 15-inch MacBook Pro from 2016 that has a dedicated graphics card could manage. I wouldn’t recommend the Laptop 3 as a gaming machine or a hardcore video editing workstation — this is a thin-and-light computer, after all — but if you need to get some video editing done on it in a pinch, it’s certainly capable.

Battery life, on the other hand, has been less than stellar. In my daily workload test, which involves setting the screen to 50 percent brightness and juggling between dozens of browser tabs, Slack, email, Word, Twitter, and other productivity apps, I get about seven hours between charges on the Laptop 3. That’s better than the sub-six-hour times I saw on the 15-inch model (iFixit’s teardown says both the 13.5- and 15-inch versions have the same capacity battery), but it’s far from class leading and short of a full work day.

The Laptop 3 does have a new fast-charging feature, which Microsoft says can bring the laptop to an 80 percent charge from nothing in less than an hour. My tests line up with that — I was able to go from dead to 39 percent in 30 minutes of charging. But the fast-charging feature only works when the laptop is closed and sleeping — you won’t get fast charging speeds while you’re using the machine.

Finally, as this is a Surface device, numerous weird bugs have come and gone throughout my testing period. I’ve already mentioned the display auto brightness bug, but I’ve also seen aggressive battery drain, fans ramping to 100 percent while charging, and the trackpad randomly stop scrolling in apps. Most of these bugs go away after fully shutting down the laptop and restarting it, but they are all frustrating things to experience in the first week of using a brand-new laptop. Microsoft typically does update its Surface devices with bug fixes and patches on a regular basis, so hopefully things will have settled down a few months from now, but right now, the Laptop 3’s experience can be hit-or-miss.

Aside from those pesky bugs and the merely okay battery life, the Laptop 3 13.5 is a very good laptop, and I think most people looking for a premium Windows 10 computer will be very happy with it. It doesn’t have any of the nagware or bloatware so common on machines from HP, Dell, and Lenovo, and it has simply the best keyboard you can get on a laptop. The Surface Laptop isn’t inexpensive, and you’ll pay for those niceties, but for the most part, it’s worth it.