Amazon’s Echo smart speaker was the origin cave for the company’s near-ubiquitous Alexa virtual assistant when it was first announced to the world back in the fall of 2014. Since then, Alexa has spread out to countless devices, including many other models of Echo speakers within Amazon’s own product lineup.

That makes the new $99.99 third-generation Echo speaker a curious beast. It is not the best-sounding Alexa speaker from Amazon (that would be the forthcoming Echo Studio), nor is it the least expensive Echo speaker (that’s the Echo Dot). It isn’t the most capable Echo speaker, either (both the Echo Plus and Echo Dot with clock technically do more).

It is, however, a relatively inexpensive smart speaker that sounds better than the small, hockey-puck-like Echo Dot or Google’s Nest Home Mini, but doesn’t take up as much space (or as much of your budget) as the Echo Studio. For an everyday smart speaker that you might use to listen to music, get weather reports, manage smart home devices, and add things to a shopping list, the latest Echo is more than capable. 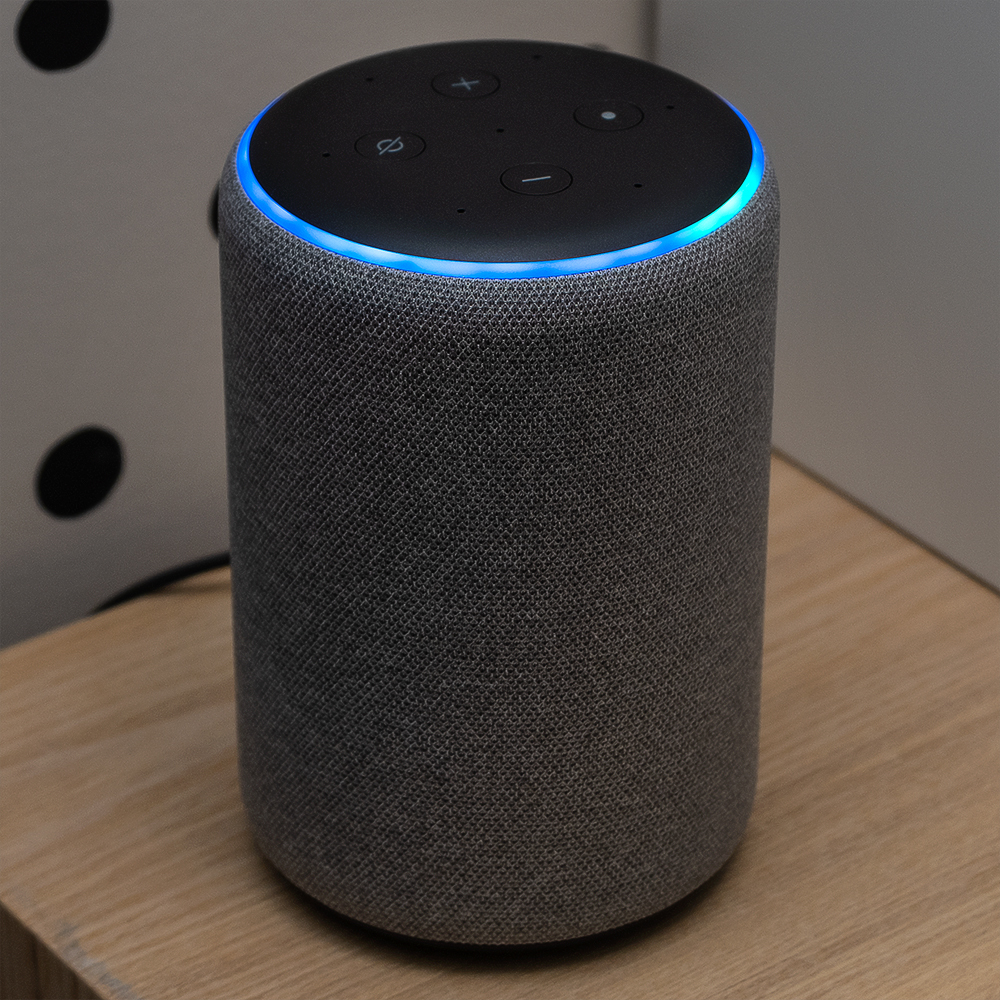 Design-wise, the latest Echo is in fact exactly the same as the Echo Plus that came out last year. It’s just under six inches tall, about four inches in diameter, and has a three-inch woofer and 0.8-inch tweeter inside of it. Put it next to the Echo Plus and you won’t be able to visually tell them apart — the only difference between them is the Plus’ ability to act as a hub for smart home devices, thanks to its built-in Zigbee radio.

That difference knocks $50 off the price and brings the new Echo in line with the price of the 2nd-gen model that came out in 2017. But the newer model has better sound and improved aesthetics, with a fabric wrap that matches the aesthetic of the Echo Dot. (The one thing you lose is the ability to change the look of the speaker with customizable shells, though I have a feeling few people actually took advantage of that and that’s why Amazon dropped it.)

Just like the Echo Plus, the new Echo sounds remarkably good, especially when you consider where Amazon was with the original model five years ago. It gets plenty loud enough to fill a medium size room with sound, the bass has an audible punch that was completely lacking in earlier models, and it has the ability to work in stereo with a second unit. It also has an excellent microphone array that hears my voice commands without requiring me to raise my voice, even when there’s music playing. It’s notable how far Amazon’s Echo products have come in terms of design and performance in just a few short years.

The new Echo does not sound as good as a Sonos One, but it is half the price (and you can probably pick it up for even less, considering how often Amazon runs promotions on Echo hardware). It does lack the clarity and crispness of a more expensive speaker, with mid-tones getting lost in the mix. And its bass punch doesn’t match what the Sonos offers. But I don’t think most people paying less than $100 for a smart speaker will have an issue with its sound, and it is considerably better-sounding than Google’s more expensive Home speaker.

If you own one of the first-gen Echo speakers, you will find this one sounds considerably better, with much better bass response. Compared to a 2nd-gen model however, the difference is less noticeable, and probably not worth the upgrade.

The other thing to consider here is the Echo Dot, which is half the price of the Echo and takes up even less space on a shelf. The Echo Dot does sound remarkably good for its size and price, but the larger Echo has better bass response and a louder top volume. There is something you get when you spend a little more.

In order to use the Amazon Echo, you’ll need to download the Alexa app for iOS and Android. An Amazon account is required to sign in. By signing up for one of those, you must agree to its conditions of use.

You can explore the documentation at that link, but below, we’ve listed the 12 terms that you must agree to.

All of these things make the Echo a bit of a middle child in Amazon’s lineup. If you’re looking for a competent smart speaker that will sound good for most everything you need it to, but don’t want to spend more than a Benjamin, it is perhaps the best option available right now.