Share All sharing options for: Ikea smart blinds review: worth the wait

Window shades rising with the dawn and lowering at sunset is the pinnacle of the modern home. Unfortunately, smart blinds are very expensive. I know this, because five years ago I paid way too much for a professionally installed pair. That’s all about to change now that Ikea has launched its first blinds in a bid to democratize the smart home.

Ikea’s Fyrtur and Kadrilj smart blinds are much cheaper than the incumbents, and they don’t require professional installation. I recently installed the Fyrtur Blackout roller blinds on a single window in my house. They’re slightly more expensive (starting at $129) than the Kadrilj blinds, but the Fyrtur model offers greater privacy and light control — the two are otherwise identical.

We first heard about Ikea’s smart blinds in January. Since then, they’ve had a couple of false starts. They were promised for a US release on October 1st but they’ve since been delayed again, even though they’re now available in Canada. Whenever they do arrive, I can assure you that they’ll be worth the wait. 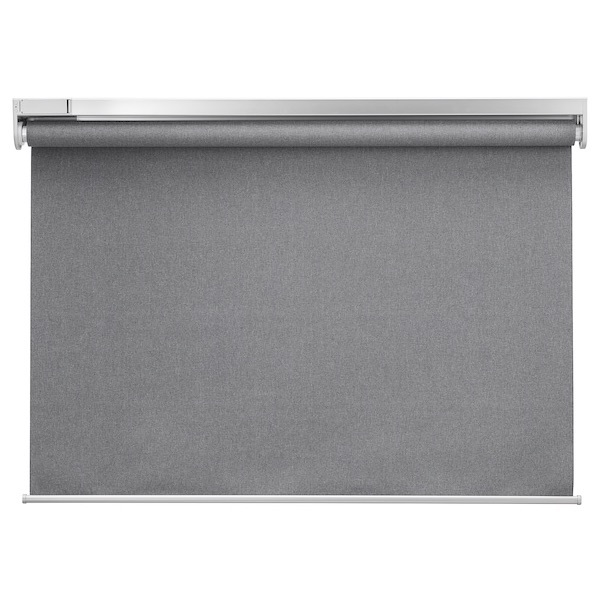 I’ve been wanting to cover one particular window with a smart blind for years but the cost was too prohibitive. See, the window in question lights a stairwell during the day but lets a rather nosey neighbor peer directly into my office at night. It’s already fitted with an Ikea blind that I usually forget to lower to the delight of the creep across the way. No more.

Ikea’s smart blinds come in a variety of fixed widths, from 23 inches to 48 inches in the US, or 60 cm to a wider 140 cm in Europe. All are 77-inches (195-cm) long. The blinds ship with a pre-paired up/down wireless remote that can control the blinds right out of the box. You’ll need Ikea’s $30 Tradfri gateway installed on your network, however, to integrate the blinds into your smart home. The package also includes a signal repeater to extend the Ikea Zigbee network beyond the reach of the gateway. The repeater is fitted with an empty USB port to charge (with included Micro USB cable) the removable battery that inserts into the front-left of the blind assembly.

The blinds are completely cordless, and can be controlled via two dedicated buttons built directly into the front-left corner of the blind mechanism. The blinds can also be controlled via the Ikea Home smart app where you can define timers for regular routines and assign blinds to groups for coordinated control. The blinds are compatible with Ikea’s burgeoning lineup of “Home smart” devices, including Symfonisk speakers, and Tradfri smart outlets, lights, switches, dimmers, and motion sensors.

I was able to add the blinds to my Google Home for voice control. Alexa and HomeKit failed to discover them, however, though Ikea says that Amazon’s and Apple’s smart home platforms will eventually be supported. That could explain the delay of the US launch which had previously been pegged to the availability of all three voice assistants.

Requires the patience of a saint

Adding the blinds to the Tradfri gateway is frustrating. As I said with the review of Ikea’s little Sonos remote control, the overall experience is plagued by dropped connections, failed pairings, and resets. It eventually works, but getting all the pieces to fall into place requires the patience of a saint. I did find that the Home smart app on Android is more stable than iOS, with far fewer dropouts when communicating with the Tradfri gateway.

Mounting the blinds to the window is much easier. They’re heavier and bulkier than the typical Ikea blinds but the two-pronged mounts are essentially the same (just deeper).

Once installed and joined to the gateway, the first thing you’ll want to do is set the max length of the blinds (they can not be cut). This can be done using the buttons embedded near the corner of the blind assembly (next to the battery). Hold the lower button until the blinds reach to the bottom of the window, release it, and then click the button twice. The blinds will do a little dance to signal the new maximum length. Now, when you lower the blinds to 100 percent they’ll only drop to the bottom of the window, not unfurl to the floor.

The in-app timers are perfect for something like a morning alarm, allowing you to raise the blinds just a little to help you wakeup. Not that you’ll likely sleep through the noise the blinds make if they’re installed in your bedroom. They’re loud, but not any worse than my professionally installed smart blinds.

Operating the Fyrtur Blackout blinds via Ikea Home smart app, one of many ways to control them.

For my needs, the timers fall just short of ideal because they don’t allow me to set local sunrise and sunset times as triggers to raise and lower the blinds. As such, I’ll have to find a workaround, or manually adjust the timings throughout the year if I want optimal light and privacy control in my stairway window. There’s also no easy, out-of-the-box ability to make the blinds respond to third-party light or temperature sensors — but with Zigbee, anything is possible if you’re willing to put in the effort.

Fitting a home with Ikea’s Fyrtur or Kadrilj blinds won’t be cheap, but it’ll be far less costly than smart blinds from brands like Somfy or Luxaflex. I just hope you like grey or darker grey, because those are the only colors available at launch.

Ikea’s Fyrtur and Kadrilj smart blinds are rolling out slowly around the world. In some countries they can be delivered directly to your home, in others, they’re only available for in-store purchase.

Ikea 2.0: inside the furniture giant’s big bet on the smart home