Nokia 2720 Flip review: proof you can’t opt out of the smartphone generation

Share All sharing options for: Nokia 2720 Flip review: proof you can’t opt out of the smartphone generation

If you’re seriously considering buying a feature phone like the Nokia 2720 Flip in 2019 then I think you’re likely to be one of three kinds of people. Either you live or work in the developing world, where smartphones sometimes aren’t a practical option, you’re the kind of person who thrives on nostalgia for a simpler time, or else you’re trying to do a “digital detox,” and decrease the amount of time you seem to waste staring at screens every day.

It’s these latter two groups that HMD has been pitching its retro-styled feature phones at for a couple of years now. Two years ago it produced an updated version of the iconic 3310, and last year it remade the 8110, the “banana phone” similar to the model used in the original Matrix movie.

The difference with this year’s £89.99 Nokia 2720 Flip is that, for the first time, it actually has most of the apps and services you need in a phone in 2019. Yes, you’ll be accessing them on an absolutely tiny 2.8-inch display and typing into them with a basic T9 keyboard, but fundamentally you won’t be cut out of your WhatsApp conversations, you won’t have to be without email, and you won’t even have to go without Google Maps. They’re all technically here.

But the thing is, you’d have to have the patience of a saint to actually use these services on a device as limited as this. Maps and emails take forever to load, and WhatsApp messages take an age to manually type out. You might not be fully cut off from the modern world, but the limited hardware these apps are running on means that, for all intents and purposes, you basically are. 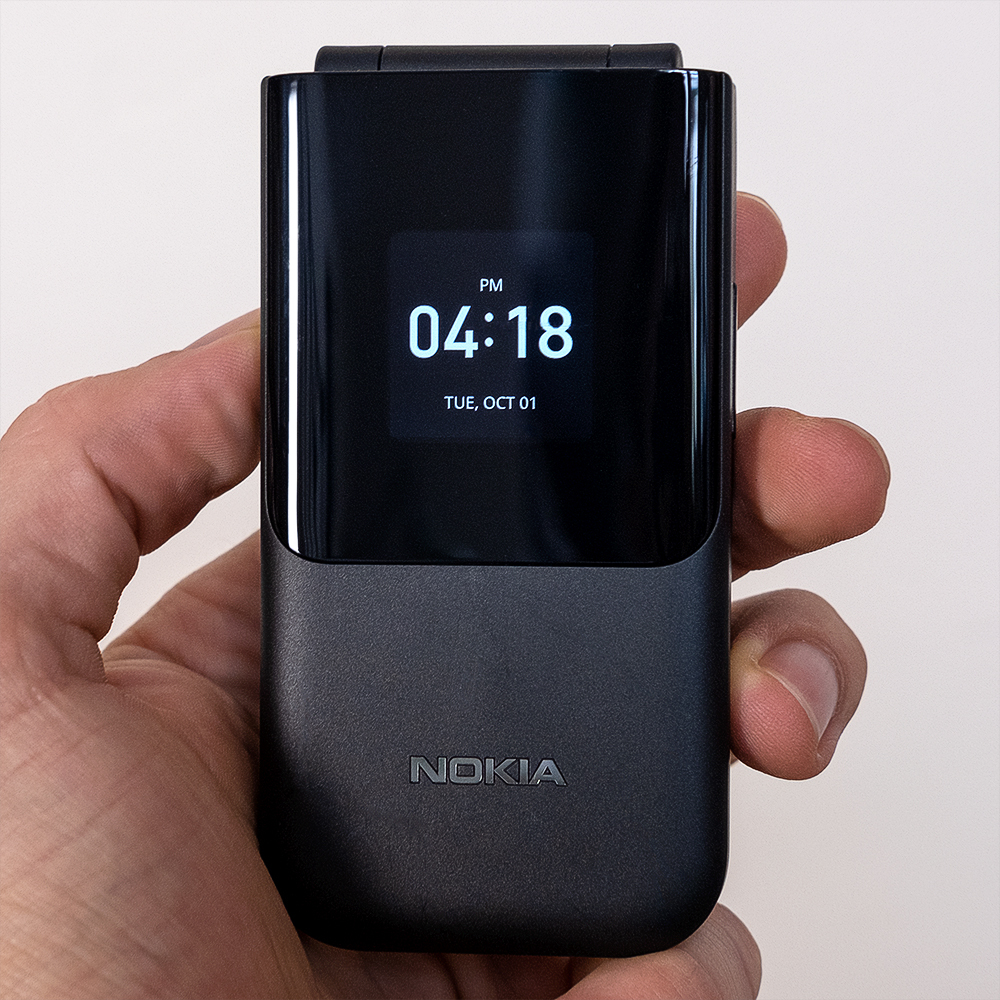 It’s a little hard to review a feature phone like the Nokia 2720 Flip, because it’s so obviously not trying to compete with any smartphone on the market. It’s got a tiny screen with a resolution of just 240 x 320, a 2-megapixel camera (there’s no selfie camera), a dual-core 1.1GHz CPU, and just 512MB of internal storage. It can connect to both 4G LTE networks and Wi-Fi, and it’s got Bluetooth for connecting to your wireless headphones.

Since HMD is pitching the Nokia 2720 Flip as the kind of phone you’d use for a “digital detox,” it seems only fair to evaluate it on these terms. In other words, can this phone do the basic things you need a communication device to do, without constantly distracting you like a smartphone?

You’ll find many popular apps preinstalled on the Nokia 2720 Flip. There are Google apps like YouTube, Maps, and Assistant, and you’ll also find Twitter, Facebook, and WhatsApp (but no Instagram, Messenger, or Spotify). On paper, its apps cover most of the functionality you’d need from an everyday phone. However, just because a phone has these apps, this doesn’t mean that they work the way you’re used to.

Take WhatsApp. The Facebook-owned messaging app isn’t impossible to use on the Nokia 2720 Flip. All the WhatsApp group chats that I’m a member of seemed to work just fine, and barring one occasion where someone tried to send me their live location, the app seemed to support most of the service’s main functionality.

But trust me, trying to type out WhatsApp messages on a T9 keyboard is endlessly frustrating, and it affected my ability to communicate with people in ways I hadn’t anticipated. Unless you’re willing to spend a lot of time typing, you’ll find that your messages will start to get incredibly short and blunt. Group chats with more than a couple of participants will become almost impossible to respond to once messages start coming in more quickly.

Using WhatsApp with a T9 keyboard feels like running in a race where you’re the only person wearing lead boots. Everyone else is firing off messages quickly on their touchscreen keyboards, but you’re struggling to get your first message sent. It was fine back in the ‘90s when everyone was in the same position, but in 2019 you risk coming off as uncommunicative, blunt, or a little rude, when your messages are as short as they’ll be when typed out on this phone.

You can mitigate this issue slightly by relying on your voice rather than the T9 keyboard to send messages. Either you can send WhatsApp voice memos as you would on a regular smartphone, or else you can hold the select button, wait for the Google Assistant to activate, and then dictate a written message. This second process can take a good few seconds to complete (meaning it’s not great at sending a message quickly), but the dictation accuracy was about as good as you’d expect from Google Assistant. Neither are great options if you’re in public and don’t want to talk out loud to your phone.

The phone includes a web browser, YouTube, Twitter app, and Google Maps, but they’re all a struggle to use on its small screen and slow processor.

It’s a similar story when it comes to the phone’s Twitter client, or web browser, or email app, or calendar, or Google Maps app. Yes, it has these things, but these are all apps that are basically optimized for touchscreens and for processors that are an order of magnitude faster than the 2720’s. You have to have a huge amount of patience to browse the web with the T9 keyboard or watch YouTube on this phone’s basic dual-core processor. Using Google Maps works in a pinch, but you have to be prepared for it to take a good minute or so to go through the laboriously slow process of getting some directions.

For the Nokia 2720, you’re going to need to agree to terms and conditions for the manufacturer of the phone and the phone’s operating system.

In addition, there’s one set of terms from Google you’ll have to agree to.

If you’re prepared to put in the effort, then you can make the phone do the things you need it to do. One time I managed to use the phone to listen to an episode of a podcast, but it was only because I had the foresight to download the MP3 file onto my PC and then transfer it into the phone’s internal memory. Even then, however, I lost my place in the podcast when I hopped out of the media player to respond to a WhatsApp message.

Some of these limitations can be overcome by carrying more stuff around with you, like we used to. When I went away for the weekend with the Nokia 2720 Flip as my only phone, I took a Kindle, a standalone camera, and a Nintendo Switch with me. There was something nice about this. I played better games, I took nicer photos, and I didn’t get distracted as much while I did some reading.

But the phone easily over-emphasizes how many apps you use on a daily basis without realizing it. This was my biggest takeaway from using the Nokia 2720 Flip. It doesn’t have any authenticator apps, for example, so I had to use my smartphone to get the six-digit 2FA code to log into my Google account as I was setting up the phone. My bank doesn’t produce a KaiOS version of its app, so I had to use my old phone to generate a security code to log into my online bank account. There’s no password management app, and you can forget about using this phone to hail an Uber.

So a lot of the time I just had to carry my smartphone with me, or risk not having access to vital information throughout the course of a work day. I had my SIM card installed in the Nokia, meaning my smartphone didn’t have internet unless I was on Wi-Fi, but I still had it with me as a backup, and honestly it was a lifesaver. One time, I was struggling to get into a company’s building for a meeting because its intercom system wasn’t working, and I didn’t have their contact information saved in my contacts list. Without my smartphone it would have been a nightmare to find their phone number in my emails.

As you’d expect for a feature phone, the Nokia 2720 Flip has longer battery life than most smartphones, although I’d be lying if I said I hadn’t expected slightly more from it. I found I had to charge the phone once every couple of days. That’s a lot better than the single day you’ll get out of the average smartphone, and you could probably tease more out of it if you don’t set your emails to automatically sync every five minutes as I did.

If you’re really looking to do a digital detox, then the Nokia 2720 Flip technically delivers on its promises. You can get by. You can spend ages painstakingly typing out your WhatsApp messages, you can slowly keep track of your emails as they come in, and you can download your favorite podcast as an MP3 file on your computer and then manually move it to the Nokia’s internal memory.

You can technically do all these things, but I want to stress that the novelty of doing them on a feature phone wears thin really quickly. No amount of pleasure at being able to snap your phone shut at the end of a phone call will make up for the odd sense of isolation at not being able to participate in a group WhatsApp conversation like you used to.

You think you can put up with these limitations because the last time you were forced to do so was when everyone else was limited by exactly the same technology. But in 2019 that’s no longer the case, and as much as I hate to say it, I just don’t think it’s possible to opt out of the smartphone era anymore once you’ve embraced it, and that makes relying on a feature phone like the Nokia 2720 Flip a pretty isolating experience.