It was three years ago this week that Spectacles first arrived, via colorful Snapbot vending machines that captivated Snapchat fans. But early buzz and largely positive reviews led Snap to make too many of the first-generation video-recording sunglasses than it could actually sell, and the company was forced to write down nearly $40 million in costs.

A second generation arrived last spring with a refreshed, waterproof design and the ability to snap still photos for the first time. But Spectacles 2 didn’t cause half the stir that their predecessors had, the company’s vice president of hardware departed, and Snap’s device ambitions faded into the background.

Now Spectacles 3 have arrived, available exclusively through Snap’s online Spectacles store. They come with a striking new design and a much higher price — $380, up from $150 to $200 for the previous edition. (Spectacles 2 remain on sale.) Snap says the changes reflect its intended audience for the new Spectacles: fans of high fashion and artists who relish new creative tools. It’s also a way of avoiding another big writedown: measuring demand carefully with a single online storefront, then selling each unit at a price that lets the company recoup a bigger share of its investment.

Our review of Snap Spectacles 3 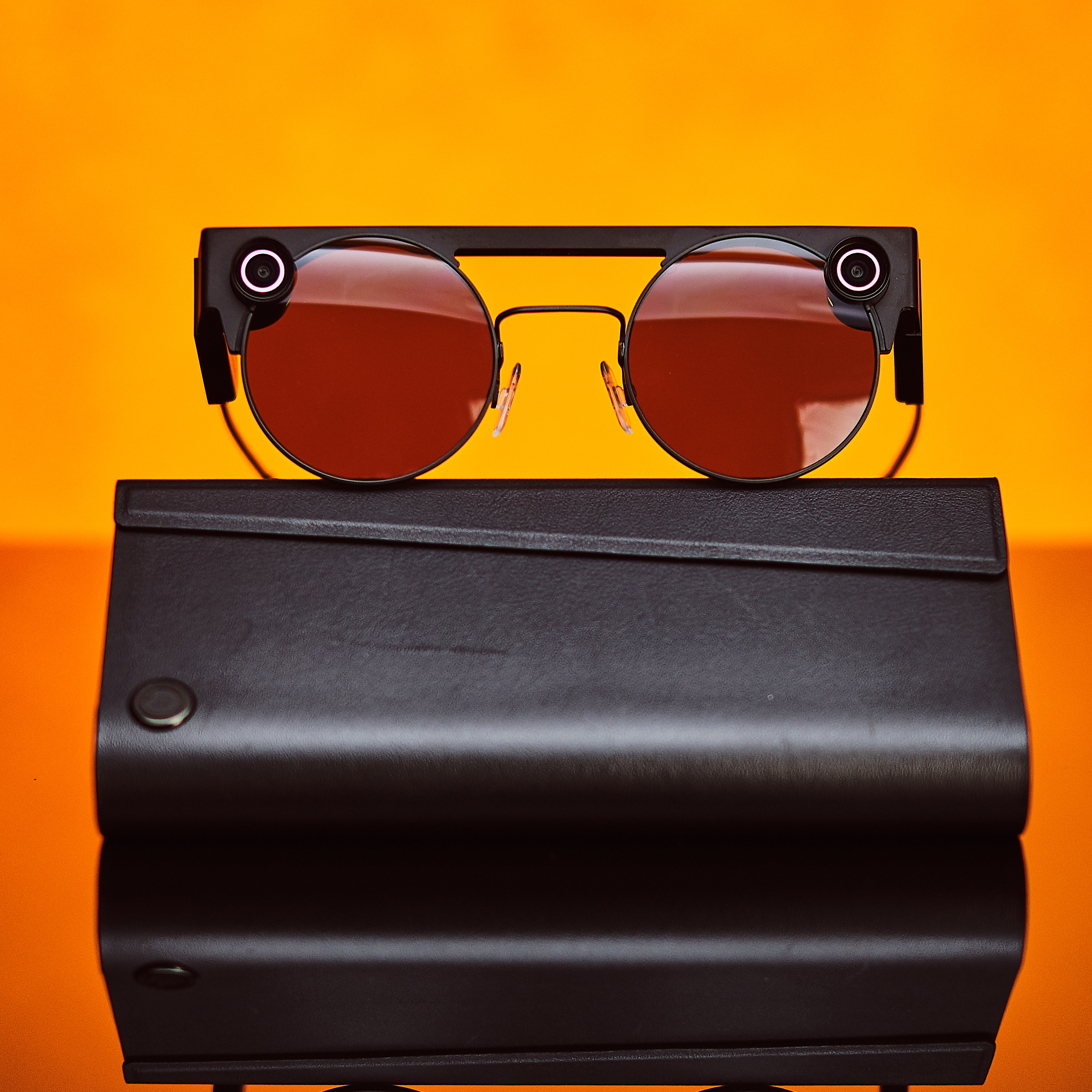 And Spectacles 3 are a milestone for the company in another way, too, CEO Evan Spiegel told me in a recent interview. Thanks to a second camera that lets the device perceive depth for the first time, Snap can now integrate its software into the real world using special filters that map to the world captured in a video.

“What’s really exciting about this version is that, because V3 has depth, we’re starting to actually understand the world around you,” Spiegel said. “So those augmented reality effects are not just a 2D layer. It actually integrates computing into the world around you. And that is where, to me, the real turning point is.”

Spiegel is playing a long game. He often says that AR glasses are unlikely to be a mainstream phenomenon for another 10 years — there are simply too many hardware limitations today. The available processors are basically just repurposed from mobile phones; displays are too power hungry; batteries drain too quickly.

But he can see a day where those problems are solved, and Spectacles becomes a primary way of interacting with the world. Spiegel says the glasses will be a pillar of the company over the next decade, along with Snapchat and Lens Studio, the company’s tool for building AR effects.

“I do think this is the first time that we’ve brought all the pieces of our business together, and really shown the power of creating these AR experiences in Lens Studio and deploying them through Spectacles,” Spiegel said. “And to me, that is the bridge to computing overlaid on the world.”

Last week, I spent some time with Spectacles 3 to see how that bridge is coming along.

The new design will be polarizing

As with many products, first impressions count for a lot, and I expect the new Spectacle design will be polarizing. I strongly suspect that I am not the target audience for Spectacles 3, but in any case I never did feel entirely myself when I had them on. Part of it was that big steel bar running across my nose, which I felt gave me a vaguely bug-like affect. And part of it was that thin steel frame, which consistently dug into my ears and scalp. The black and mineral colors are sleek, but for the most part I missed the toy-like, but comfortable, plastic of the first two generations.

The company says you can capture 70 videos or 200-plus photos on a single charge, which should be enough to get you through most day-long outdoor activities. To recharge Spectacles 3, you store them in an attractive fold-out leather-wallet. (The elegant wallet may actually be my favorite part of the entire product.) A full charge takes 75 minutes, and the case itself recharges via USB-C.

Spectacles reverses the normal user interface for capturing images: you tap on either of the two camera buttons to record a 10-second video, or press and hold to shoot a 3D photo. As with previous generations, you can tap the button again to add 10 seconds to your video, up to a total of 60 seconds.

The marquee feature on Spectacles 3 is a new kind of Snapchat filter that takes advantage of the glasses’ depth perception to create a new category of 3D effects. There are 10 of these depth perception effects available at launch — adding disco lights that bend as they hit your body; big red hearts that pop as you move through them, and so on.

Unfortunately, though, you can’t see those effects while you’re shooting video. The actual process goes like this:

In practice, this may only take about a minute. But I found that image processing could take much longer when I was away from Wi-Fi, as I suspect many Spectacles 3 users might be when playing around with their new glasses. Delays like this can discourage the kind of artistic experimentation that Snap has put at the center of its marketing campaign for Spectacles 3.

Moreover, I found the initial set of depth-sensing filters mostly underwhelming. Some applied color effects to my videos in a way that made the video look grainy and unattractive. Others aren’t particularly differentiated from regular old filters — it turns out that confetti with depth perception looks a lot like confetti without depth perception.

I also found some annoying bugs. Sometimes, after sending the snap to the cloud and back for image processing, two of the included filters simply didn’t work. I swiped over to the filter, and it didn’t apply any effect to my snaps at all.

One last frustration with Spectacles’ integration with Snapchat: snaps taken with Spectacles still don’t transfer automatically to your Snapchat account. Instead, you connect to your phone over Bluetooth or Wi-Fi and and transfer them manually. In my experience, this has made me reach for Spectacles less and less over time. (If you’re at home, on Wi-Fi, and have your Spectacles charging, Spectacles can be set up to export snaps to Snapchat automatically, but there’s no way to do it while you’re wearing or using them.)

The Spectacles 3 package also comes with the 3D Viewer, a cardboard tool for viewing the 3D photos you take with the glasses. (It’s the same basic product as Google Cardboard, which Google just discontinued for lack of interest.) Assemble the Viewer, slip your phone into it, and Snapchat enters a special viewing mode designed for photos. I liked browsing 3D photos in the Viewer — you tap a conductive cardboard button to advance through them, and the photos rotate slightly as you move your head. To me the Viewer felt more like a novelty than a core part of the Spectacles product, but I can see how artists might find better uses for 3D photos.

To use Snap’s Spectacles 3, you must agree to:

Taken together, the advancements in Spectacles 3 represent a meaningful improvement over what came before it — without quite making a complete case for themselves as an essential creative tool. There’s a good amount of novelty in the product, but I fear that, as with the previous two generations, that novelty will fade quickly.

And that matters, since the latest generation of Spectacles is more than twice as expensive as the previous one. Snap’s best hope here is that its community of AR developers, who have proven themselves quite adept at building compelling filters and lenses, make better use of Spectacles’ new second camera than the first batch of filters do.

And Spiegel is dreaming much bigger than that. I asked whether it might someday be possible to send messages from Spectacles to Spectacles, making the product feel as immediate as Snapchat itself. He told me that it was already in testing.

“This is something that we’re actively experimenting with and playing with,” Spiegel said. “And I think it’s really fun to — in near-real time — see the world through someone else’s perspective, in 3D.”

Of course, Snap is far from alone in working on AR glasses. Apple, Facebook, and Microsoft are among the companies with versions in the works. Of those, though, Snap is the only company currently selling to consumers. (Microsoft’s HoloLens, at $3,500, isn’t really in the same conversation.)

That means its failures get more attention. I asked Spiegel what Snap got in exchange for all the pressure of building in public. He said that getting direct feedback from customers helped Snap iterate faster on its designs.

“If you compare version one of spectacles to version three, it’s like night and day in terms of the quality of the product,” Spiegel said. “And so to see that evolution in such a short period of time tells me that if we just keep at this, 10 years from now, I think we’re going to be able to deliver ultra-precise, very high-quality products. And that that’s something that we’re just gonna have to learn, and it’s expensive, and it takes time. But I think in the long run, it’ll pay off.”