Nokia’s brand name is perhaps best associated with indestructible candy bar phones and inexpensive but competent smartphones. But the company also has a line of mesh Wi-Fi routers called Beacon. Much like other mesh router systems from Eero or Google, Nokia’s WiFi Beacon routers are designed to provide broad Wi-Fi coverage across your home through the use of multiple units, or nodes.

Nokia currently has two models in its lineup, the entry-level Beacon 1 and the more powerful Beacon 3. Either can be purchased in multipacks or as single units, depending on your coverage needs. While the Beacon 1 is the less costly model, starting at $99.99 for a single unit and going up to $249.99 for a three-pack, the Beacon 3 is the more interesting one, as it offers some specs and features that aren’t available on other mesh systems. It is sold as single unit (for up to 2,000 square feet), two-pack (up to 4,000 square feet), and three-pack (up to 6,000 square feet) configurations for $149.99, $299.99, and $399.99, respectively.

That prices the Beacon 3 right up at the top of the mesh router market next to Netgear’s higher-end Orbi options and the Eero Pro system. Unlike the Orbi and the Eero Pro, though, the Beacon 3 doesn’t have a dedicated third wireless band that allows the nodes to communicate with each other without having to share bandwidth with device traffic. Instead, the Beacon 3 is packed with more antennas for both 2.4GHz and 5GHz than other mesh router systems. This, combined with Nokia’s traffic management technology, is what the company says provides faster throughput and better coverage than other mesh systems.

Our review of Nokia Wifi Beacon 3 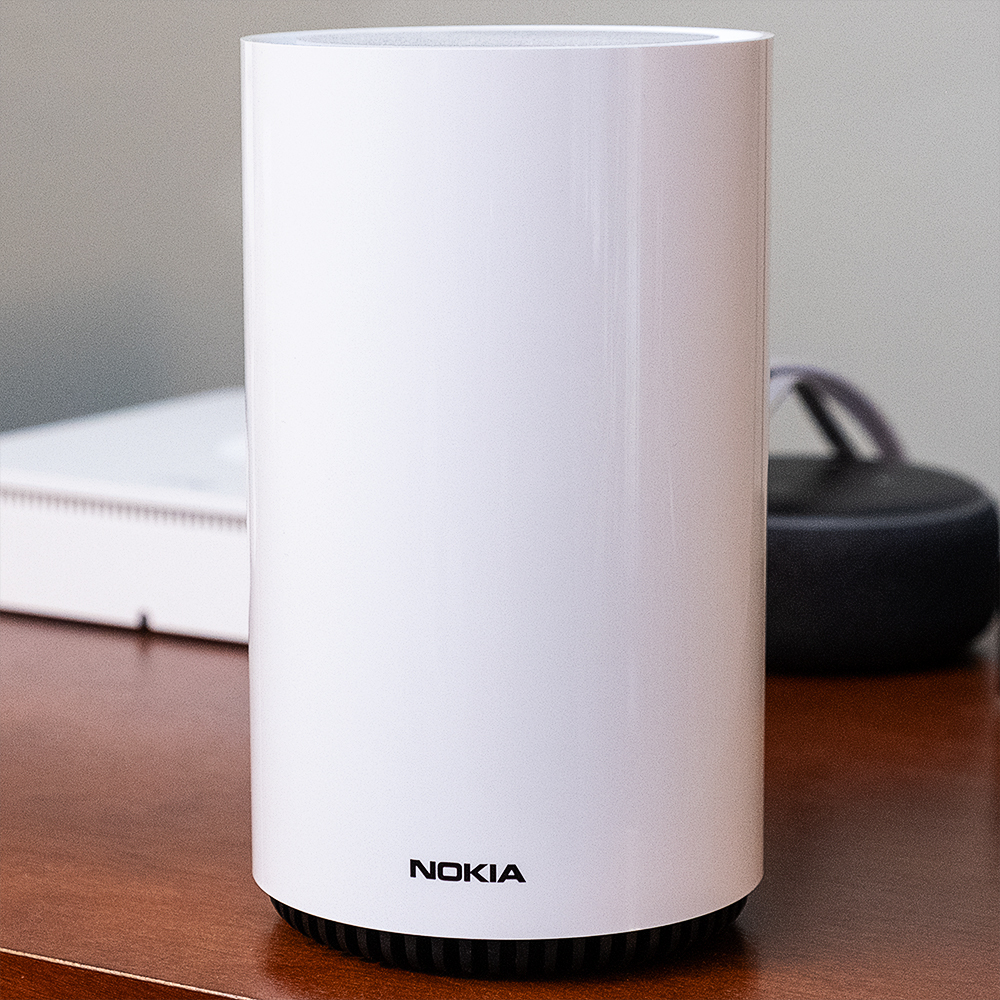 I’ve been testing a three-unit Beacon 3 system in my 2,100-square-foot split-level home for the past few months to see how it compares to other mesh router systems. I have a gigabit internet connection from Verizon Fios that provides me with plenty of bandwidth, but it can be hard to make use of all of that speed with typical mesh routers. That’s also the case for the Beacon 3, but it does provide slightly faster throughput than an Eero Pro. So if you’ve got a very fast home internet connection and you want to be able to access more of it over Wi-Fi, it might be an appealing option.

The Beacon 3 units are considerably larger than either Eero or Nest Wifi routers; they are roughly the size of an Amazon Echo speaker. That makes them a bit less discreet than other routers, but the advantage is that each node includes four gigabit Ethernet ports, which is two more than either Google or Eero gives you. More Ethernet ports on the nodes give you more flexibility with what you can do with them, whether that’s running a wired backhaul between them with Ethernet that’s built into your home or plugging devices like a desktop computer, smart home hub, or gaming system directly into the Wi-Fi node to minimize wireless traffic.

Setting up the Beacon system is similar to Eero or Nest Wifi: you download Nokia’s mobile app, plug the system into your existing modem, and set it up. The app is not as slick or easy to use as Google or Eero’s, and it can be a bit hard to understand at times. It does offer the ability to remotely monitor the network and has a web browser interface with more advanced controls, however.

Throughput on the Beacon 3 is impressive, and it’s able to give me faster internet speeds than Eero Pro when directly connected to the main mode plugged into the modem as well as any nodes downstream. It’s not able to give me the full pipe of what my gigabit service pumps into the house, but it’s still very fast. Latency is also very low, which helps make things like loading webpages feel snappy.

Coverage from the three-unit system was also excellent. It was able to give me a strong Wi-Fi signal that I could use to stream 4K video on in every corner of my home. Since Nokia recommends the three-pack for considerably larger homes than mine, I probably could have had just as good of an experience with just two units.

Setting up the WiFi Beacon 3 requires the use of the Nokia WiFi app for Android and iOS. To use the app, you must agree to Nokia’s Terms of Service and its Privacy Policy. There are no other agreements for the WiFi Beacon 3.

But while the speeds and latency on the Beacon 3 were both impressive, there are other parts of the experience that aren’t as nice as Eero or Nest Wifi. I’ve already mentioned how the app isn’t as easy to use or understand, but in addition, the Beacon 3 doesn’t do as good a job “bouncing” my devices from one node to another as I moved across my home. That might mean my phone or laptop doesn’t connect to the nearest node to my location; instead, it’s stuck on whatever node it connected to initially. I also had some issues with Sonos speakers and other Wi-Fi devices falling off the network or not connecting reliably, likely due to the fact that most device manufacturers have not optimized their products to work with Nokia’s relatively obscure mesh routers.

The Beacon 3 also doesn’t support Wi-Fi 6, which is the latest Wi-Fi networking standard, and it will become increasingly relevant over the coming years. Most of its competitors don’t support Wi-Fi 6 either, and the mesh router systems that do are considerably more expensive right now. It’s also not something that most people will be able to take advantage of for some time, as only a handful of recent phones and laptops support Wi-Fi 6 right now. Still, if you’re paying $400 for a router system now, you’re likely going to want it to be as future-proofed as possible.

Overall, Nokia’s unique mesh router system is a competent performer, and it will provide faster connection speeds for those who have very high-speed internet services in their homes or small businesses. But for most people who are just looking for a simple mesh system to address Wi-Fi coverage gaps in their homes and have average broadband service, I’d recommend either Eero or Google’s systems, which are nicer to use and less expensive.