The battery lasts 10 days, but the software will bother you in one

Fossil has created a new line of smartwatches that, in theory, are exactly what many of us want. They have physical watch hands that work on top of an e-paper screen that’s so low-power that the watch can last for a couple of weeks on a charge. You get the benefit of a traditional watch without a glowing screen and the ability to get useful information and notifications.

Fossil’s new Hybrid HR platform has all of the right ideas, but few of them feel finished. Depending on your needs, that might not be a huge problem for you, but there is no question that there is a lot of unfulfilled potential inside these watches.

If you love the way they look, they do cover the basics — starting at $195. With much more advanced competition from Samsung and Apple available at around the same price points, looks are the main reason to consider Fossil’s new hybrid watches now. 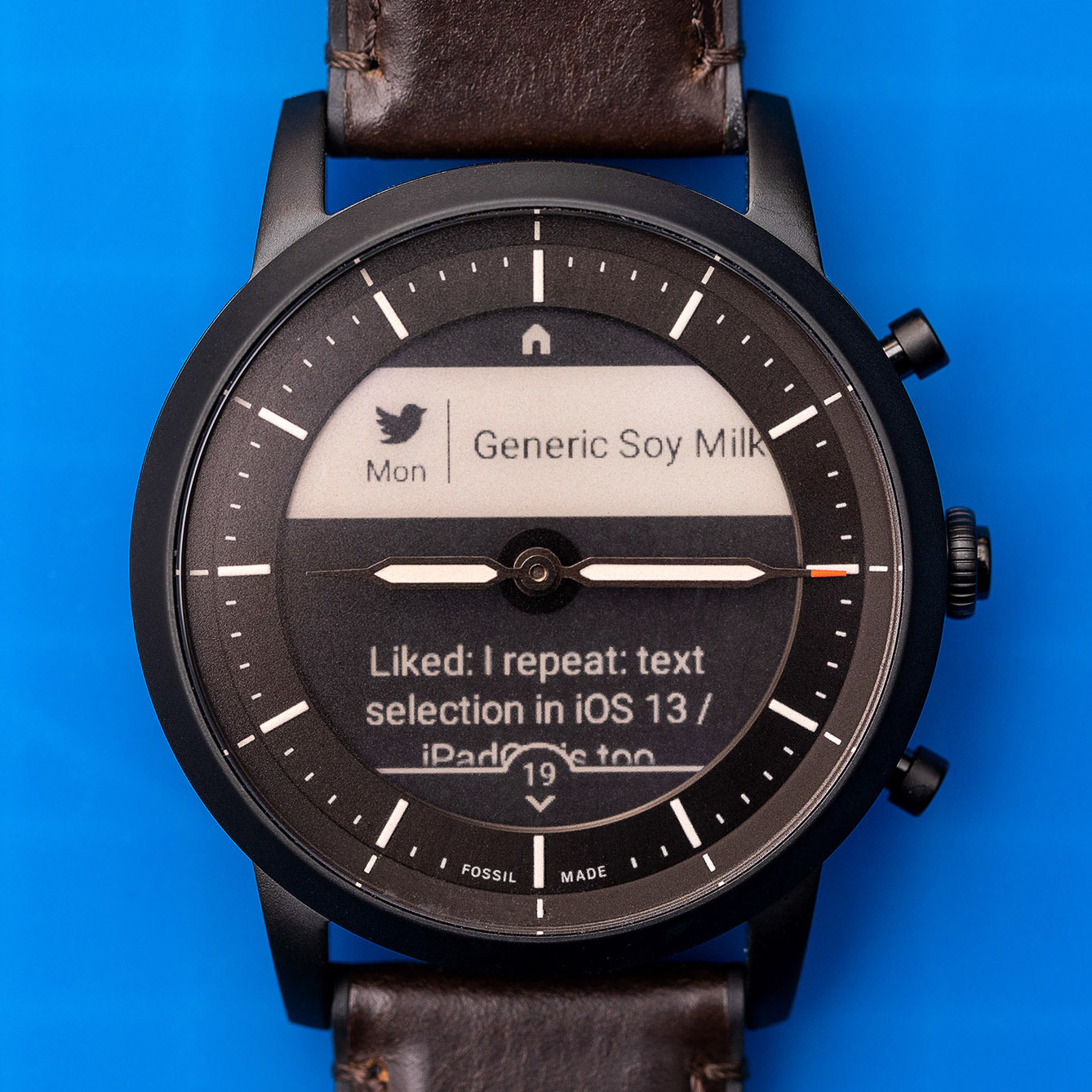 The model I am reviewing is the “Hybrid Smartwatch HR Collider Dark Brown Leather.” But in true Fossil fashion, there are several nearly identical models with slight variations in style. It is a heavy, chunky watch: 13mm thick and 42mm in diameter. The watch straps are easily replaceable, but the leather version that comes with this one is quite nice.

It is to me, anyway: this watch matches my aesthetic preferences, and I would be happy to wear it every day, but I also don’t have a problem with large watches. If you have smaller wrists, these watches will feel awfully big on you.

The watchface is a small, circular e-paper screen surrounded by a ring with hour indicators. The two watch hands sit above it. It all feels well-integrated and watch-like, though I do think the screen feels cramped, especially when you are trying to read a notification on it.

The core of the Hybrid HR software on the watch is a simple, somewhat customizable watchface with four spots for complications. Your options for what information goes into those spots are somewhat limited: there’s weather, some fitness options, and the date. That’s really about it.

It’s not backlit, either. To see the time in the dark, you just double-tap the watch, and it will be lit up with four tiny LEDs — much like a traditional LCD watch from the ‘80s. It looks sort of cheap, but it’s weirdly nostalgic!

To start using the Fossil Hybrid HR you will need to set up a Fossil account. When you do, you must agree to:

You can optionally also:

We’ve seen smartwatches with physical hands before, and one of the problems is that those hands occlude the information on the watchface. That obviously happens on the home screen here quite a bit. The Fossil Hybrid HR system’s solution is that you can flick your wrist, and the hands will do a little spin around for a second or two, letting you see what’s underneath them.

You can also customize the buttons to bring you into a few specific sections of the Hybrid HR system. I hesitate to call these functions “apps,” but there’s not a better word for it. Here’s what you can do:

You can customize different button configurations and watchfaces in the smartphone app, so you could theoretically switch between a workout mode and a work mode. In practice, tucking into Fossil’s smartphone app is enough of a hassle that you won’t bother.

When you click into one of these apps, the watch hands move to point to 9 and 3, so they’re horizontal, and then the information displays above and below them. It works, but it’s awkward. Worse: it means that very little information can fit on the screen at any given time. That would be okay if you could quickly scroll, but the refresh rate on this screen is slow enough to be annoying.

You’ll likely find yourself tapping a button to scroll and either waiting in annoyance or — more annoying and more commonly — hitting it twice because you thought maybe the first press didn’t take and it’ll scroll too far.

The Hybrid HR system has better fitness tracking than I expected, with stats for steps, workout times, calories burned, and heart rate. You can sync it to Under Armour or Google Fit but not Fitbit. If you’re mostly interested in fitness, a Fitbit or an Apple Watch is a better bet.

The Hybrid HR can show you notifications, but mysteriously, it can only do so for a just over a dozen hand-picked apps, though a few more are reportedly on the way. So while I can get notified about calendar alerts and Facebook likes, I can’t get alerted for Slack messages or Signal texts.

I’d expect that limitation on iOS, but it’s baffling that it also exists when you use the watch with an Android phone. Fossil already makes hybrid smartwatches that can receive alerts from any arbitrary app.

You cannot reply to notifications, of course, as there isn’t a microphone or a touchscreen, nor is there a speaker; all of the alerts are vibrations on your wrist. It does have an alarm system if you are the sort of person who wears a watch to sleep.

Despite all of the complaints above, I do still kind of dig this watch. I like the way it looks, I like that it has a battery that lasts nearly two weeks (mine died after 10 days), and I like that it does the majority of things I want from a smartwatch. I just wish it did them a little better, even within the limitations imposed by this screen.

The real question is why would you impose those limitations. We’ve seen similar screens on smartwatches do much more — on the Pebble smartwatches. Even setting that aside, the Apple Watch Series 3 costs the same and does infinitely more. Similarly, you can find a Samsung Galaxy Active smartwatch for around the same price if you’re an Android user.

Charging a smartwatch every day is annoying, but for me, it’s less annoying than dealing with the limitations of the Hybrid HR. If the price came down or if the software got better, that calculation might change. Until then, unless you really love the way this watch looks, consider something else.