Motorola Moto G8 Plus review: a battery boost for the budget king

It’s hard to fault at this price

Share All sharing options for: Motorola Moto G8 Plus review: a battery boost for the budget king

Over the last few years, Motorola’s Moto G-series phones have been consistently excellent budget devices. In fact, the Moto G7 is our current pick for the best budget phone available today.

Now Lenovo-owned Motorola is back with the first of its G8 range of devices. This is the £239 (€269 or about $306) Motorola Moto G8 Plus, which sits at the top end of the affordable G-series lineup thanks to its more powerful processor and higher-resolution main camera. It’s available in Europe, Australia, Mexico, and Latin America, but it’s not currently scheduled to release in the US.

The Moto G8 Plus is another capable inexpensive smartphone from Motorola, and honestly it’s been a pleasure to use. Its battery life is excellent, and the tweaks Motorola has made to Android continue to do a great job of making its devices that much more user-friendly without ever feeling like they get in the way. The only real compromise you’re making here is with the phone’s camera and the fact that it’s launching with Android 9 rather than this year’s Android 10, but I think these are acceptable trade-offs at this price.

Our review of Motorola Moto G8 Plus 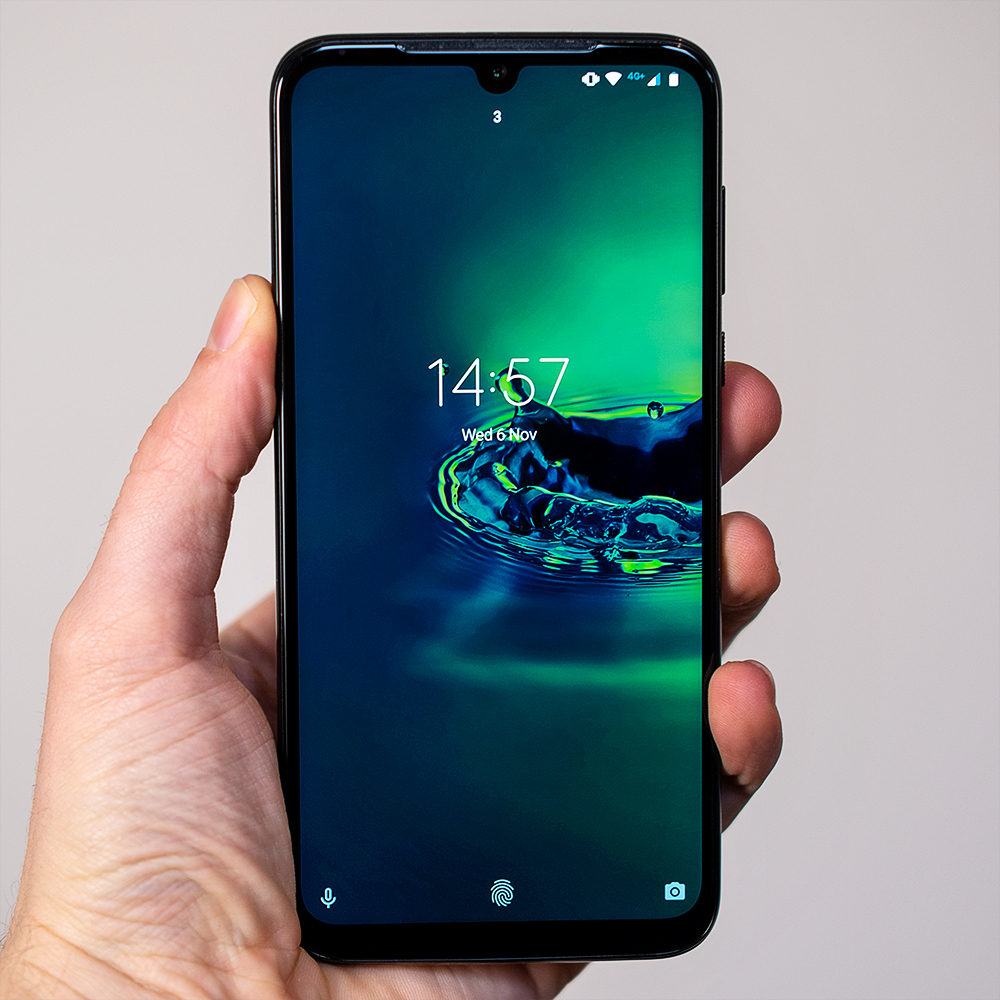 On paper, it’s hard to get too excited about the specs of the Moto G8 Plus, especially since they’re so similar to the Moto G7 Plus from earlier this year. It’s received a slight spec bump in terms of its processor (it now has a midrange Snapdragon 665 rather than a midrange Snapdragon 636), and its storage and RAM are unchanged at 64GB and 4GB, respectively. Its LCD screen is a fraction of an inch bigger at 6.3 inches rather than the G7 Plus’ 6.2 inches, but it’s still a 1080p affair with a small teardrop notch up top. Oh, and there’s still no IP certification, so you’re best keeping it away from water.

The G8 Plus has a respectable 4,000mAh battery

Motorola has made a more significant change with the capacity of the phone’s battery, which is now a respectable 4,000mAh. That’s not quite as much as the G7 Power’s 5,000mAh capacity, but it was still more than sufficient for my needs. While I wouldn’t have the confidence to claim you’ll get multiple days of battery life out of this phone, I will say that I struggled to drain the phone past 50 percent even on my longest days of use.

It’s a shame to see that the 27W fast charging that Motorola included on the Motorola G7 Plus appears to have been reduced to just 15W here. That means you’re likely to have to wait close to two hours to reach 100 percent rather than the sub-one hour that was reportedly possible on the G7 Plus (although this was likely helped by its smaller battery). You still get a 3.5mm headphone jack, though, which is always appreciated.

The camera performance of the Moto G8 Plus is a little more complicated. The Moto G8 Plus technically has a triple-camera array on its rear, one more than the dual cameras on the G7 Plus. The main camera’s resolution has been bumped up from 16 to 48 megapixels (though the resolution of the photos themselves are capped at 12 megapixels), but the secondary camera is still a 5-megapixel depth sensor.

Where it gets a bit messy is with the third camera. This is technically an ultra-wide angle 16-megapixel camera, but rather than using it to let you take ultra-wide angle photographs, it’s actually designed to let you film videos in landscape while you’re holding your phone vertically, similar to the Motorola One Action that was announced earlier this year.

To use the Motorola Moto G8 Plus, you need to agree to five compulsory agreements:

These last two options are hidden by Motorola in a sub-menu, so be sure to keep an eye out for them if you want to opt out.

In total, there are five mandatory agreements and six optional agreements for the Motorola Moto G8 Plus.

I’m of two minds about this decision. Being able to film a landscape video without having to reorientate my phone is a neat trick. It makes filming one-handed much easier, and the camera’s video stabilization works well. But the videos come out looking noisy and a bit blurry, and overall I think I’d prefer the option of taking wide-angle photographs.

Otherwise, the photos you get out of the Moto G8 Plus are fairly average. I was generally happy with their level of detail, and it was nice to see that the photos didn’t come out looking overly saturated. However, the camera’s limited dynamic range is a problem. It often forces you to choose between underexposing your subject or overexposing the sky. Despite the camera ostensibly including an HDR feature, this didn’t seem to improve the situation by much.

The Moto G8 Plus’ biggest strength is just how usable it is on a day-to-day basis, which has a lot to do with the small additions Motorola has made to Android 9. These do a really good job of offering small bits of functionality that never get in the way. Sure, some of the phone’s “Moto Action” gesture controls verge on gimmicks, but others, like being able to perform two “karate chop motions” to quickly turn on the phone’s flashlight, are great little timesavers.

Its Moto Actions range from being gimmicky to genuinely useful

None of these features will come as a surprise to anyone who’s used one of Motorola’s recent G-series phones, but they continue to work well on the Moto G8 Plus.

There’s one glitch with these notification actions that I occasionally found really irritating. In theory, the phone’s display should illuminate by itself only when you’re approaching the phone to use it, in order to show you any of your existing notifications. However, I sometimes found that the phone would repeatedly illuminate when it was sitting on the desk in front of me, regardless of whether I was reaching for it or trying to ignore it. This didn’t seem to have any impact on the phone’s exceptional battery life, but it got annoying.

In short, the compromises Motorola has made with the Moto G8 Plus mean that it’s unlikely to win over anyone who would otherwise buy a flagship device. Its camera is so-so, its specs are distinctly midrange, and you’re giving up other nice-to-have features like IP-rated water resistance.

But the Moto G8 Plus is still a very usable device on a daily basis. Its battery life is great, and Motorola’s small tweaks to Android really add to the phone’s efficiency. We’re still waiting to find out what Motorola has in store for the non-Plus Moto G8, but for now this is another great budget option from the brand.

Motorola resurrects the Razr as a foldable Android smartphone