Share All sharing options for: Amazon’s Echo Flex is a smart speaker for very specific needs

For the past couple of years, I’ve had a smart speaker installed in my bathroom, which I use to play music and podcasts in the shower and get the day’s weather report while I brush my teeth. Since my bathroom is tiny, there isn’t a great spot to put the speaker, so I’ve used one of the many plastic mounts available to install it directly on the wall outlet.

Amazon’s Echo Flex seems specifically designed for my needs: it’s a smaller Echo speaker that plugs directly into a wall outlet so you can install it in a bathroom, kitchen, hallway, or anywhere else where you don’t have a shelf to put a speaker, but where you still want a voice-controlled assistant. In addition, the $24.99 (though frequently on sale for under $20) Flex has a USB port to charge a phone, and it can accept add-on modules to expand its functionality. Currently, there are two add-ons available: a motion detector and a night light, which sell for $14.99 each (or about $12 when on sale).

But after testing the Echo Flex in my home for the past week or so, I’ve found it doesn’t quite replace the smart speaker in my bathroom. Instead, it fills a very specific niche of smart speaker needs.

Our review of Amazon Echo Flex 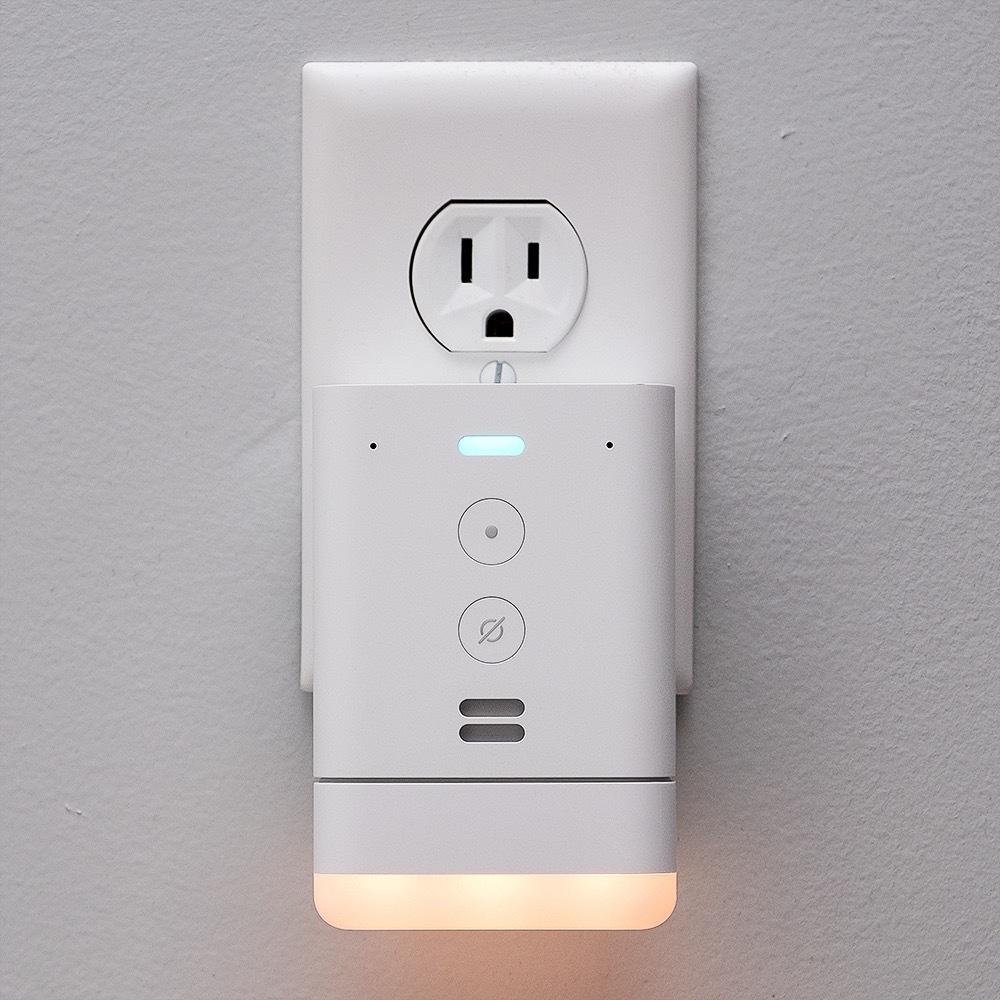 Like all other Echo speakers, the Flex has always-listening microphones, which let you access Alexa’s vast capabilities with just a simple voice command. There are two on the Flex — fewer than the seven you’ll find on an Echo Dot — but they were able to hear my commands well up to about 10 feet away.

You’ll want to be at least that close to the Flex when you use it anyway, as the 0.6-inch “mini speaker” doesn’t have a loud enough volume for you to hear it from across the room. The Flex also doesn’t have the sound quality of an Echo Dot or Nest Mini for voice responses or music. I think it might actually be worse than the original Echo Dot, which sounded like a can full of angry bees. Needless to say, it was not powerful enough to listen to anything while taking a shower.

Amazon’s new Echo Dot has better looks and a better sound, but the same price as before

The Flex does have the ability to connect to larger speakers via a 3.5mm cable or a Bluetooth connection for better sound quality, but that adds another level of complexity and equipment that belies the simple appeal of the Flex.

So if the Flex isn’t a great speaker for music, what can it be good for? Thanks to its ability to accept add-on modules, you could use it as a motion detector to trigger smart lights and Alexa routines or as a night light in a dark hallway or other space.

The smart night light behaves as you’d expect: it turns on when the light level in the room is low and turns off when the sun comes up or you turn on a light in the room. You can also change its light color to a variety of shades through the Alexa app. If you want a purple (or green or red, etc.) night light, that’s a thing you can have.

The motion detector is probably more interesting to those with smart home devices. You can use it to turn on lights in a room, turn them off after a set period of inactivity, or run other more complex routines set in the Alexa app. Unlike battery-operated motion detectors from Hue, SmartThings, and others, the Flex’s sensor is fixed in position and needs to be located on a power outlet. That can present issues with placement and sightlines; you need an outlet that isn’t behind a piece of furniture or on an obscure wall for it to really be useful.

There were other issues I encountered with the motion detector as well. Sometimes, it just wouldn’t trigger the lights, even though the blue indicator light on the device said it detected motion. The latency was also much greater than the Hue motion detectors I’ve used, often taking a few seconds to turn on the lights after I walked into the room. But the Flex doesn’t require a hub, so if you’re looking for just a single motion detector for one room, it’s a simpler install process than the Hue system. Those with more complex smart homes should go with a Hue or SmartThings system for motion control, however, as they offer additional functionality on their platforms, such as temperature measurement, that aren’t available through the Alexa app.

In order to use the Amazon Echo Flex, you’ll need to download the Alexa app for iOS and Android. An Amazon account is required to sign in. By signing up for one of those, you must agree to its conditions of use.

Overall, the Flex is best for those who want a voice control access point (and perhaps a motion detector) in a specific place where you can’t put a more traditional speaker. If you fit that narrow use case, then the Flex will probably work well for your needs. But most people looking for an inexpensive smart speaker should stick with an Echo Dot or Nest Mini.