Complicated in more than seven ways

By Stefan Etienne@StefanEtienne Feb 11, 2019, 10:00am EST
Photography by Amelia Holowaty Krales / The Verge

Share All sharing options for: AMD’s Radeon VII is a hot, loud, powerful answer to Nvidia

The VII is the direct successor to AMD’s Vega 64 and shares a similar architecture to that card, with specific improvements in clock speeds and VRAM. But with Nvidia’s cards dominating the conversation and loaded with unique features not available on the Radeon, the VII will have to prove its merit based on pure performance: can this card actually play modern AAA games at 4K resolutions and a steady 60 frames per second?

In addition, one of the main concerns of any high-end graphics card is supply and demand. PC gamers are all too familiar with fluctuating GPU prices and a lack of retail availability, whether it’s a change in market trends or a sudden interest in mining cryptocurrency. Nvidia suffers from this, too: supply is so low that it’s basically impossible to find an RTX 2080 Ti listed without a considerable markup. If AMD can’t produce and ship enough units, you won’t be able to find it for that $699 price — and its value proposition against Nvidia’s cards will completely fall apart.

I can’t help but feel some uncertainty about giving AMD the benefit of the doubt, because history has not been in its favor. When the Vega 64 launched in 2017, it also had comparable performance to Nvidia’s top-tier GTX 1080, but it wasn’t readily available in large numbers and its price spiked as a result. It’s not yet clear that will happen again, but the fact that AMD’s card went on sale late last week and is already out of stock at most retailers (except from AMD directly) doesn’t inspire confidence.

Over the past week, I tasked myself to test games in 4K and 1440p on the Radeon VII, looking for any indication that AMD’s card will be a competitive alternative for Nvidia’s RTX GPUs. The short answer? Yes, it is. The long answer: it’s complicated.

Our review of AMD Radeon VII 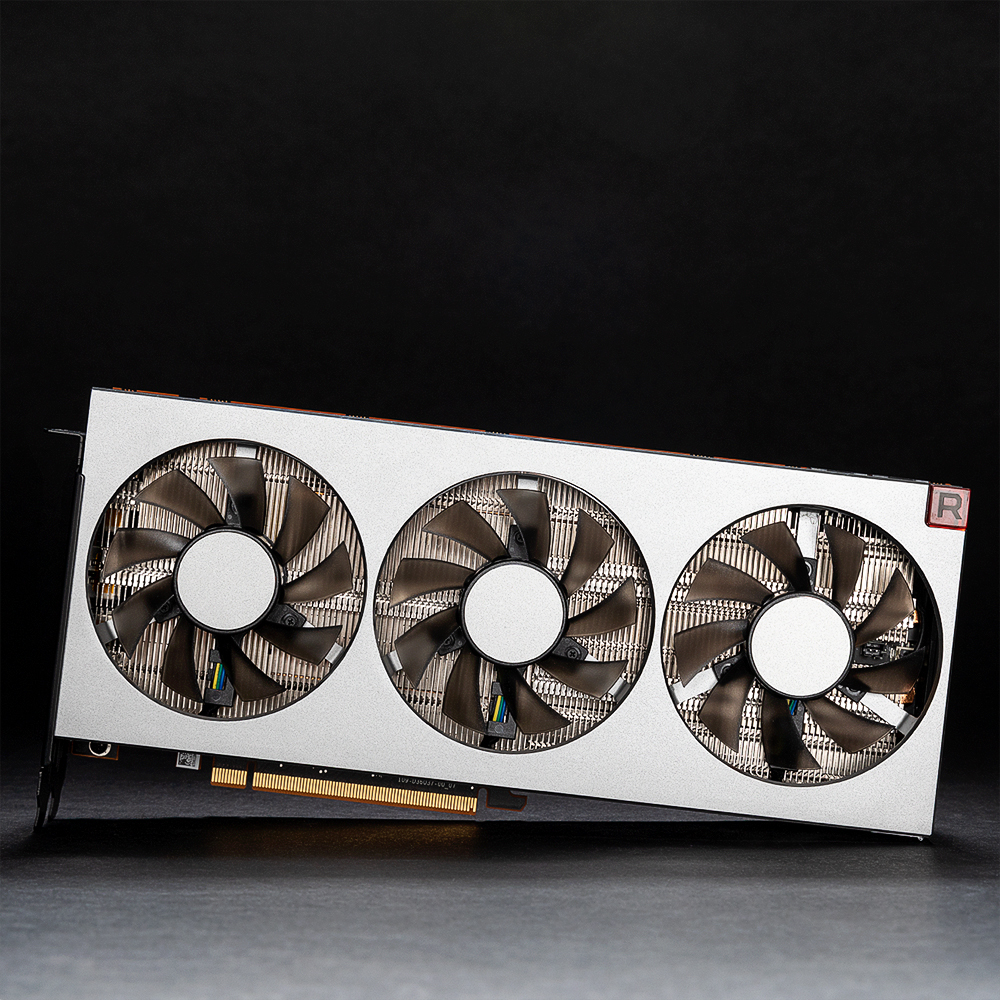 The Radeon VII is powered by AMD’s second-generation Vega architecture and is designed to tackle the steadily increasing memory requirements of games, as well as the plethora of high-resolution displays that gamers and creative users work with. It actually has fewer cores than the Vega 64 did, but comes with a 300MHz higher boost clock speed and double the HBM2 memory, at 16GB.

A smaller 7nm process and double the memory since last generation

That’s twice as much RAM as found in the 2080, and a full 5GB of RAM more than even in the top-tier 2080 Ti. AMD’s RAM also offers twice the bandwidth of Nvidia’s. The new 7nm manufacturing process is part of what gives the Radeon VII its name — AMD confirmed it also stands for “Vega II” — and it, too, is ahead of Nvidia’s current 12nm processes.

These improvements come at a cost, however. The Radeon VII is a power-hungry GPU, even though it’s using the most power-efficient manufacturing process to date. It requires two eight-pin connections and sips up to 300 watts of power, around five more watts than the previous generation’s requirement and 75 more than Nvidia’s RTX 2080.

The Radeon VII doesn’t quite look like any of AMD’s recent graphics cards, because its cooling system doesn’t work like them either. Instead of a blower design with a single fan that pushes the GPU’s hot air outside of your case, AMD has a new open-air, triple-fan design that’s different than some of the third-party coolers we’re used to seeing. Like Nvidia’s RTX cards, the Radeon VII is vapor chamber cooled, using a graphite thermal cooling pad instead of thermal paste to stay cool under load.

But even with the triple-fan design and vapor chamber cooling, the Radeon VII runs hot and loud. Whether I was using the card with an eGPU enclosure or inside of a desktop, the Radeon VII’s fans always sang a song of high RPM while it was under load.

It’s often difficult for my co-workers in the Verge office to figure out what I’m doing in front of some newfangled gaming monitor. But with the Radeon VII, it’s a different story: “Are you playing games?” is usually followed by “Is that the AMD card?” Having a quiet desktop gaming PC and using this graphics card (at least with AMD’s reference cooler, which all of its partners are currently shipping) are mutually exclusive.

Those fast and loud fans didn’t keep temps down as much as expected, either. I could feel the heat emitted by the GPU across my desktop’s chassis and through its air vents, making my mATX-sized case hotter than any RTX series card did. If you prefer having a quiet setup or keeping your GPU cool at all times, the Radeon VII might make that difficult for you.

It runs hot and loud.... all the time

What’s actually going on with the heat is a bit complicated, though. At first, it seemed like the Radeon VII was burning up: I measured a peak temperature of 105 degrees Celsius playing Black Ops IIII, at 4K resolution and ultra settings, which is a really hot peak temperature.

But AMD told me that’s not only within normal operating temperatures, but that this card measures temperature very differently than before, so it’s not really comparable with other GPUs. The Radeon VII uses junction temperature — the highest operating temperature of the actual semiconductor and not the surrounding exterior — to better gauge and throttle performance under load, and it’s also doubled the number of temperature sensors since the last Vega card (64 in total).

AMD can actually run the card a little bit hotter than before to give you better performance, because it can more accurately see when you’re approaching the redline. AMD says that the Radeon VII will start throttling when the junction temperature reaches 110 degrees Celsius. I did not see temps that high in my tests, so the card was apparently performing as designed.

AMD also includes software with its display drivers called Radeon Chill, which has a power-saving feature that drastically decreases the fan noise and heat the card produces. But it also throttles performance, which makes it harder to play games at 4K resolutions.

Over the next few weeks and months, we’ll see different versions of the Radeon VII from OEMs like ASUS, MSI, and others. It’s possible that thermal management and noise could be slightly better addressed in those models.

To understand why the Radeon VII is consuming all that power, I had to test its capability to consistently reach 60+ fps in popular PC games.

To see how this card performs with a setup reflective of PC gaming gear in 2019, I tested the Radeon VII with both QHD and 4K monitors. Both displays feature high refresh rates — 120Hz on the 4K Acer Predator and 144Hz on the 1440p AOC display — and HDR, and were connected to the Radeon VII through DisplayPort. But if you’re wondering if this GPU is a perfect fit for your 120 / 144Hz monitor, my immediate response would be “no.” The Radeon VII only got past 120 fps in two out of the five demanding games I tested.

The Radeon VII has strong performance when playing 4K games without ray tracing. I was able to play Battlefield V in 4K ultra settings at an average of 65 fps. But the RTX 2080 manages at 73 fps in the same game, and the considerably more expensive RTX 2080 Ti hits an average of 84 fps. With real-time ray tracing turned on, the Nvidia cards’ performances do take a hit, but that option isn’t even available on the Radeon VII.

Moving from a first-person shooter to displaying the gorgeous racetracks of Forza Horizon 4 at 4K and ultra settings, the Radeon VII clocked in an average of 84 fps. This still doesn’t best the RTX 2080 and RTX 2080 Ti cards, which averaged 97 fps and 109 fps, respectively.

The first time we tested the RTX cards at launch, we didn’t see 4K performance results anywhere near what we’re seeing today. The improvements can be attributed to the many updates and game optimizations released in the months since their launch. That means AMD might also be able to catch up, but it has plenty of work to do.

In short, while the Radeon VII’s performance falls slightly behind the Founder’s Edition RTX card, you’ll still be able to play demanding AAA titles in 4K, holding strong at around 60 fps, while reaching higher values for less demanding games.

On my lower-resolution QHD monitor, the Radeon VII crushed every game running in 1440p that I threw at it. For example, I clocked 116 fps while playing Battlefield V at ultra settings. Similarly, Black Ops IIII is considered light work for the Radeon VII, hitting 149 fps on ultra settings at 1440p.

While testing gaming and streaming at the same time, I only lost ~5 fps on Rainbow Six: Siege at 1440p. Streamers should be able to record in 1440p (or 1080p for that matter) without worrying at all about having the performance headroom to simultaneously handle streaming and gameplay.

Based on my experience with the Radeon VII, it is indeed a very capable high-end graphics card for modern, high-resolution gaming. It remains stable under heavy loads, without any crashes or shutdowns on any of the machines I tested it with. But even with twice as much memory and that fancy new 7nm manufacturing process, the Radeon VII doesn’t beat the RTX 2080 in gaming performance, despite that card being built on a 12nm process and with just 8GB of RAM.

The Radeon VII is close, but not close enough

Creatives might be able to get more use out of the Radeon’s extra VRAM, but gamers aren’t likely to yet, as many games are just unable to use all 16GB on tap. The RTX card also runs cooler, uses less power, and has support for options like real-time ray tracing and DLSS, which aren’t available on the Radeon. Admittedly, we’re still waiting on enough games with real-time ray tracing to actually justify buying a card for that feature.

Much like how Nvidia was able to improve performance on its RTX cards with a series of software updates, AMD has a shot at redeeming the Radeon VII in the long term. Game optimizations and driver updates released after the card’s launch could slightly improve the Radeon VII’s performance, and could make it more competitive on a performance level compared to Nvidia’s cards.

The card is still hard to find

But it all hinges on whether AMD is actually able to produce enough cards to meet demand and keep prices steady. A representative for the company told me that “[AMD] believes we are well positioned to satisfy demand and, in addition to selling on AMD.com for customers in the U.S. and Canada. [We] are also working with e-tailers and AIB partners to support global sales for this exciting new product.” Furthermore, “Ongoing supply for the Radeon VII is expected to arrive on a weekly basis to meet demand.” During time of publication, the Radeon VII is available on AMD’s website (limited to one per customer), but is sold out at most online retailers.

Overall, the Radeon VII is certainly the best card AMD has released in some time, and is capable of modern gaming at 4K resolutions. But if I were buying a new GPU today, I’d have a hard time choosing the Radeon VII over the more capable RTX 2080 for the same price.

How to install Fortnite on Android