Share All sharing options for: Focal Stellia review: the 8K TV of headphones

We’re living in a time when luxury and tech brands keep flirting with each other’s products, whether it’s $2,000 iPhones or even pricier Tag Heuer watches running Wear OS. The best crossover between the two categories has always been headphones, which give manufacturers a lot of surface area to drape in premium leather and metal ornamentation while also raising the budget for exotic materials or production techniques. The freshly announced Focal Stellia are the latest, and among the most successful, specimens of the luxury-tech hybrid.

Priced at an unapologetic $3,000 and available to buy right away from Focal and Amazon, the Stellia satisfy the demands of both luxury and tech enthusiasts. These headphones are sumptuous to the touch and the mere act of unboxing them is an experience worth paying for. Once you put them on, they’re also supremely comfortable. Putting a closed-back design around the beryllium speaker of the Focal Utopia, the Stellia are also sonically impressive and will wow music lovers whether they’re audiophiles or not. So yes, we may all have trouble digesting the huge lump sum of money that Focal asks, but the product itself goes a long way to justifying that expense.

Our review of Focal Stellia 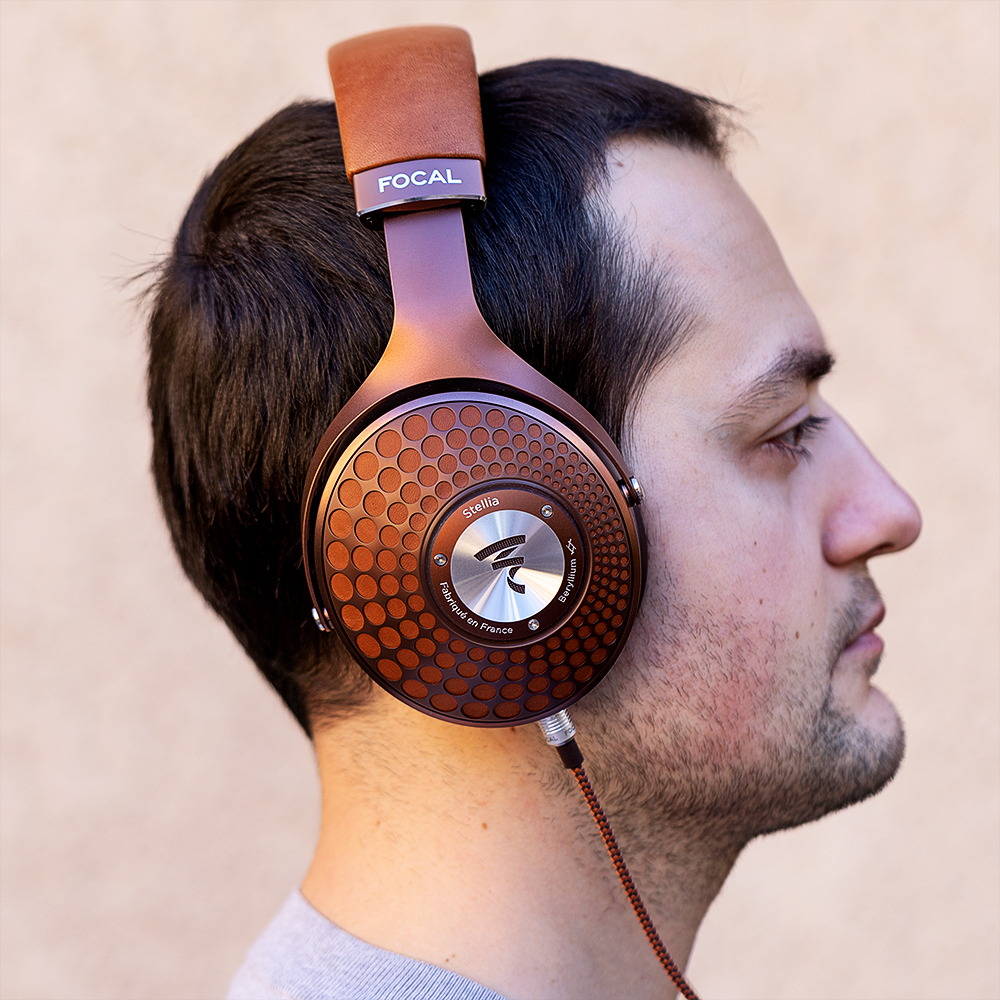 On the few occasions that we buy things for ourselves that cost upward of $1,000, it’s usually an item of luxury or technology. And when we spend such money, we have high expectations. Focal lives up to the most exacting of standards with its Stellia: they’re dressed in full-grain leather, they have thick memory foam cushions that clamp your head into a vice of loveliness, and their aluminum yokes, woven cables, and contoured hard case just exude quality. There’s even an awesome leather wallet for the paperwork, which I’d immediately adapt into a classy passport holder.

The general rule with headphones is that open-back designs get you the purest possible sound, while closed-back ones keep your music insulated from external noise. The vast majority of headphones on the market today are closed-back, including almost all earphones. They are what people think of when they think headphones: a way to take your music on the move, keep it private, and isolate yourself from a noisy surrounding.

Open-back headphones, on the other hand, are for people who are willing to compromise on versatility and noise isolation for the sake of the best sound. Without a closed enclosure that creates unwanted reverberations inside the ear cup, an open-back headphone design can be focused on improving the acoustics pointed at the ear instead of fixing the problems created by the shell around it.

To like these headphones, you’ll have to be a fan of the color brown — or “cognac and mocha,” in Focal’s words — because there’s no other option. Though built on the same physical frame as the preceding Focal Utopia, Elear, and Clear, the Stellia are recognizably unique, thanks to their striking exterior, which features an overlay of perforated metal atop yet another layer of leather. Never let the French be accused of abandoning their heritage of baroque ornamentalism.

The Stellia are closed-back in design, and their impedance has been reduced to 35 Ohms to make them friendly to portable audio sources. Focal actively encourages thinking of these as a more portable, more universal version of the Utopia — but that look of theirs, together with the sheer, irreducible bulk, makes for plenty of curious stares should you ever try to wear the Stellia out on a walk anywhere. I naturally did try, and after some crisscrossing of London’s streets, I felt like I’d been wearing a giant ginger afro wig.

The noise isolation of the Stellia is good for headphones in their heavyweight class, but it’s still nowhere close to the passive isolation you get from, say, studio cans like the Sennheiser HD 380 Pro that were designed for the purpose. The Stellia are only really semi-closed. Their comfort in use, though, earns no disapproval from me: they carry their weight well and have never caused me any pain or soreness.

Powering the Stellia is remarkably easy, and I was able to crank them up to unadvisedly high volumes with an Astell & Kern Kann portable player as well as with Essential’s USB-C audio dongle plugged into my phone. Given the performance contained within those glamorous cognac walls, I’d say Focal has done an amazing job of reducing the need for additional equipment to get the most out of the Stellia. By comparison, anyone trying to enjoy the Focal Utopia without a beefy desktop amplifier was really not doing them justice, whereas you can get close to the Stellia’s best performance even when plugged directly into your portable audio device.

Another subtle but significant change from the Utopia: the cable connectors plugging into the Stellia have been simplified to standard 3.5mm plugs. That gives you access to a huge range of affordable alternate cables, should Focal’s own not prove to your satisfaction. I like them, for the most part, as they’re thick, durable, color-matched with the headphones, and just stiff enough to resist kinking and tangling. The one thing that troubles me with the cables is that they produce microphonics from rubbing against my clothes when I’m wearing the headphones and not listening to anything.

Turning to the main attraction of the Focal Stellia, I have to confess that their sound did not sweep me up on a magic carpet joyride upon my first listen — because it’s not meant to. Focal calls these headphones reference-class, which signals the company’s aim for a purist sound that exaggerates or diminishes as little as possible. The best term I can use to describe it is flavorless: like water, these headphones adapt to and represent the character of the thing they’re interacting with more than any peculiarities of their own.

Here’s the problem: the absolute best-sounding headphones, to my preference and that of many others, don’t sound perfectly flavorless. I’m currently also testing the flagship Audeze LCD-4z, and their fantastically detailed and lifelike sound is underlined by a loving touch of extra bass that makes them nigh-on perfect. With the LCD-4z, and Audeze headphones in general, I feel the bass. With the Focal Stellia, much as was the case with the Focal Utopia before it, I hear rather than feel it.

In spite of my bass-loving ways, I gave the Stellia a fair chance and, over time, I grew to really appreciate and enjoy them. In the audio world, the notion of resolution means much the same as it does with visuals, referring to how much detail a certain device is able to reproduce. Well, the Focal Stellia are like those huge 8K TVs we see only at trade shows, exposing all the nuance you could want from any given song. This resolution is achieved courtesy of the super-expensive beryllium speaker inside each ear cup, which minimizes distortion and deviation, and thus leaves room for every note, shuffle, and whisper in a recording to come through. Whenever people say, “I heard things I never heard before in that song,” it’s a sign that they stepped up to a lower-distortion, higher-resolution pair of headphones.

For me, the album that really feels like a whole new experience through the Focal Stellia is Halsey’s Hopeless Fountain Kingdom. Her vocals are pure, beautiful, and taking center stage, just like they should, but it’s the absolute cornucopia of stuff going on in the background that I hadn’t previously appreciated. The production of that album is extremely elaborate, and the Stellia represent every layer with forensic precision, so it’s separable and distinguishable from the next.

Switching over to Sage Francis’ A Healthy Distrust, the soundstage collapses, the beats get dirty and less precise, and I can easily visualize the difference in production facilities between Sage and Halsey’s albums. One is a meticulously perfected pop concoction while the other is a deliberately gritty affair, which is news to no one. However, sensing those differences for yourself in such a direct and instant way is a big part of why people are willing to spend big on high-end audio gear. If you’re only going to listen to underground rap or grime, you’d probably be better served by a cheaper and bassier alternative like Focal’s own Elear, but if you want to genre-hop and truly feel the differences between various productions, the Stellia do that better than almost any other headphones.

Last but not least, I have to mention Tadashi Tajima’s Shingetsu album of shakuhachi performances. The Stellia give life to the bamboo flute in a wonderfully organic way, and the combo of that peaceful music and the headphones’ comfort and noise isolation has had me listening to the album on repeat for many hours at a time.

Let’s get away from the price thing for a moment. Are the Focal Stellia worth wanting? Absolutely. Picking them up when I get settled in for a day’s work, even taking them out on the move when I feel particularly ostentatious, I get a reliably exciting and insightful performance every time. Their unsparing sonic transparency isn’t always to my tastes, but it is faithful to the music and technically impressive. To a great extent, Focal has taken the big demanding beast that was the Utopia and refined it down to a more humane offering.

I can’t dictate to anyone what a particular gadget or product is worth, because each person’s budget and circumstances will differ. That being said, it’s safe to assume that the Stellia at $3,000 is basically blowing whatever headphones budget you have for the next decade, if not the rest of your life, on one single pair of cognac-colored cans. Alas, I never quite fell in love with the Stellia to the degree where I could advocate doing that.