The Palm phone won’t save you from your phone

The deck is stacked against it

Share All sharing options for: The Palm phone won’t save you from your phone

Everybody who sees the Palm phone doesn’t really want to believe me when I tell them that it isn’t any good. For one thing, it’s adorably tiny and decently well-designed. (It looks exactly like a little iPhone X.) People take one look and want it to be good, or at least good enough to fulfill its promise.

But the real reason people don’t want to believe me is that it promises to meet a real need that we all feel more every day: it’s supposed to save you from your actual phone.

The Palm phone has been available for a few months to Verizon customers and on a few international carriers. The idea behind it is compelling: instead of carrying your attention-sucking phone around, you can carry this tiny thing. It shares your phone number, but it doesn’t share all of the apps and social media angst you have on your main phone.

I’ve been trying to use it off and on since it was released, and I have mostly given up because the Palm phone is just kind of junky as a phone. It’s more promise than product.

Our review of Palm 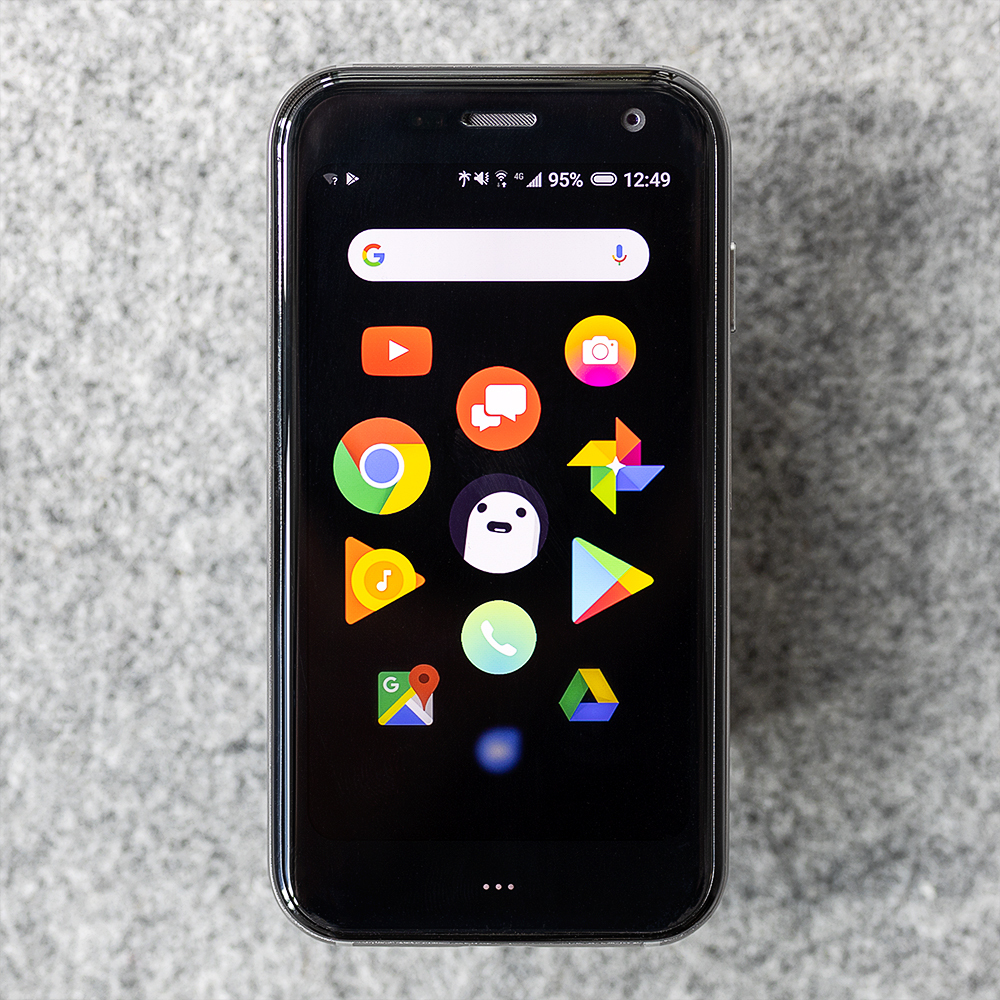 If you haven’t heard of the Palm phone before, here are the basics: it’s an Android phone with a 3.3-inch screen that’s so small you could almost fit it in the coin pocket of your jeans. It costs $350 and shares your phone number, acting as a second device on your line in the same way a connected smartwatch would. Verizon charges an extra $10 per month to keep it active, just like it does with connected smartwatches. (Also, it has literally nothing to do with the old Palm, Palm OS, or webOS.)

Processor is a weekly YouTube show that takes a deeper look at how consumer technology is changing and how we should think about our gadgets as people, not just as users. Subscribe here.

But the Palm phone isn’t a smartwatch. It’s a full Android phone. What you’re supposed to do is use it when you don’t want to be distracted by your main phone. You don’t have to muck about with having a second phone number, and you don’t have to give up having real apps if you need them. Where a traditional feature phone can’t call you a Lyft, the Palm phone can. It theoretically eliminates some of the hassles of getting a second phone.

I say it “theoretically” eliminates those hassles because, as a practical matter, there’s no way to eliminate all of them without a radical rethinking of how our phone networks operate in the first place. You might be able to receive phone calls, but text messages are a problem. Only SMS and MMS syncs, and only via Verizon’s awful Message+ app. iMessage, WhatsApp, Signal, and even RCS Chat won’t make it to your phone.

Requiring $10 extra per month and not getting text messages are just the infrastructural problems that the Palm phone can’t overcome. I don’t think either is necessarily insurmountable, but even if Palm had managed to do so, the Palm phone would still be a loser on its own merits.

Here are some of the problems with the Palm phone: the camera is terrible, the operating system doesn’t have the latest Digital Wellbeing features that are ostensibly the whole point of getting this phone, the face unlock feature is likely insecure, there are no physical volume buttons, its custom software only occasionally helps with its tiny screen, it’s preloaded with a fair bit of bloatware, it’s terrifically slow, and (most of all) the battery life is downright atrocious.

The reply that a theoretical Palm apologist would give to all of those criticisms is that I’m using traditional phone metrics to judge a thing that is not a traditional phone. I will admit that it could make sense to judge the Palm phone on different metrics than how we normally judge phones. The battery life is bad, yes, but you’re not really supposed to have it on all the time anyway. It’s slow, but really, you shouldn’t be using it to do a ton of work. You should just look at it when you really need it. And so on.

If there’s one bit of custom software that encapsulates this dichotomy, it’s “Life Mode,” Palm’s cloyingly named feature that’s meant to minimize distractions. When Life Mode is on, the phone goes into an airplane mode when the screen is off. With the cellular and Wi-Fi radios turned off, you won’t receive any notifications.

That’s good and all, but I can’t help but suspect the real point of Life Mode is to make up for how poor the battery life is. If you use the Palm phone like a regular phone, you’ll be lucky to make it to noon. You’re not supposed to do that, of course, and so it can theoretically last a day if you, you know, don’t use it. But even with Life Mode on, it still drains on standby enough to kill it in a day — and that’s with the radios off.

What’s worse is that Life Mode actually makes the experience of using the phone more distracting because all of those notifications come rolling in as soon as you turn it on. Sure, you will have fewer of them because you will have installed fewer apps on this phone than you would on your main phone. But now you’ll have two phones that require you to tweak your notifications settings and two phones that will need charging every day.

Even if you grant that the Palm phone was designed to be kind of bad to entice you to use it less, even minimal use will annoy you enough that you’ll end up leaving it in a drawer and just taking your actual phone with you. You know the one: it’s the thing with the really good camera and the big screen and — yes — all of your apps.

It’s those apps that are the real problem, not your phone.

We have heard for the past couple of years that our phones are bad for us. We’re staring at them instead of at each other, and even when they’re in our pockets, they vibrate and distract us. We’re only half here. Various movements have arisen to convince Apple and Google to do a better job of helping us use them more humanely.

The science on whether any of this qualifies as an actual “addiction” is inconclusive, as Rachel Becker explained last December. Nevertheless, I think it’s more than safe to say that it’s a problem for a lot of us.

Apple and Google have responded with features designed to help us have a better relationship with the apps on our phones. They’ve finally made it easier to trim down on all the notifications we receive. There are also new features that let us set time limits on apps and even gray-out the screen so we’re not tempted by all the pretty colors. For some, they help, but I suspect a lot of people are like me: when they hit the time limit, they just turn it off and keep scrolling.

I’d like to see more advanced software on our main phones. Software that makes me think twice before I open an app, not after I’ve used it for an hour. Software that is better at understanding why I am using a given app for hours on end on some days and not at all on others. Software that lets me toggle between something like a “Full Use Mode” and a “Lite Mode” that’s stricter about what it lets me use.

But that software is likely a ways off, and setting it up would probably take so much upfront configuration that most people wouldn’t bother with it. Anyway, the truth is that we should not meekly wait for these giant tech companies to protect us from ourselves. We should figure it out on our own. We’ll have to anyway, given the incentives at play for app makers.

More than anything, the need to figure out this whole complicated situation is why the Palm phone is so compelling to people. It’s why so many people want to believe that it could be good: because it offers a quick, no-fuss promise to fix all of this. Just plop down the $350, and all of your problems will go away.