Audio-Technica is usually a headphone maker you can rely on, the kind of company that embodies the Japanese stereotype for fastidious and durable design. That pedigree made me extremely eager to see and hear the first Audio-Technica true wireless models, which are the flagship $249 CKR7TW and the simpler and sportier $199 SPORT7TW. But that same pedigree is also what has me profoundly disappointed with both. Far from raising the bar for true wireless earbuds, Audio-Technica has ended up in a morass of first-generation flaws and foibles that most of its rivals have by now overcome.

Audio-Technica’s two TW models are fundamentally different, and I happen to really enjoy listening to one of them. But both have significant failings that limit their appeal, with two of those downsides shared by the two models. Pain point number one is the charging: it’s glacially slow and works over Micro USB instead of USB-C. At their price, Audio-Technica’s true wireless buds have little excuse not to include the newer, better connector. Audio-Technica also fails to support low-latency AptX for its wireless communications, so watching video with either pair of these buds is a lag fest.

Our review of Audio-Technica ATH-CKR7TW 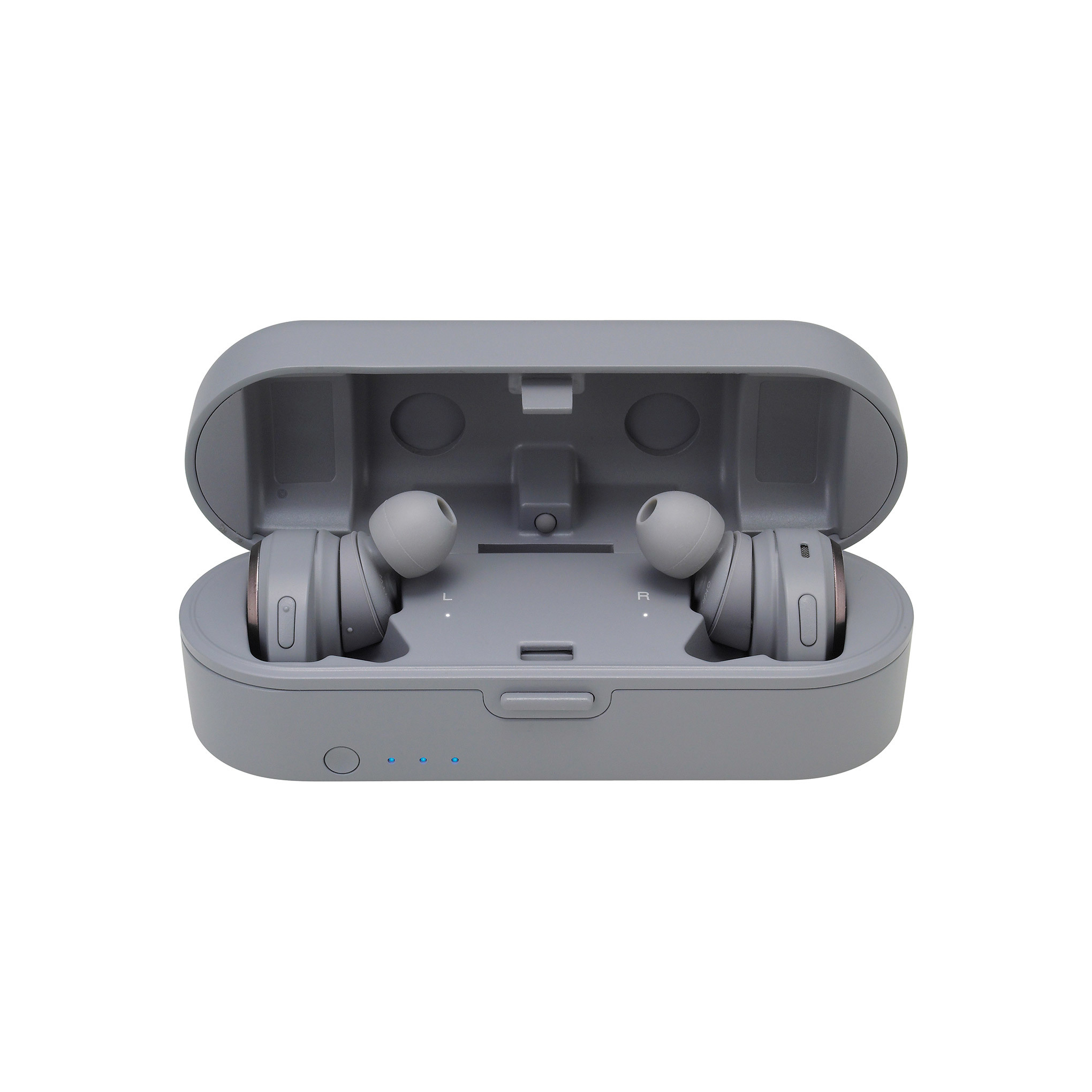 Our review of Audio-Technica ATH-SPORT7TW 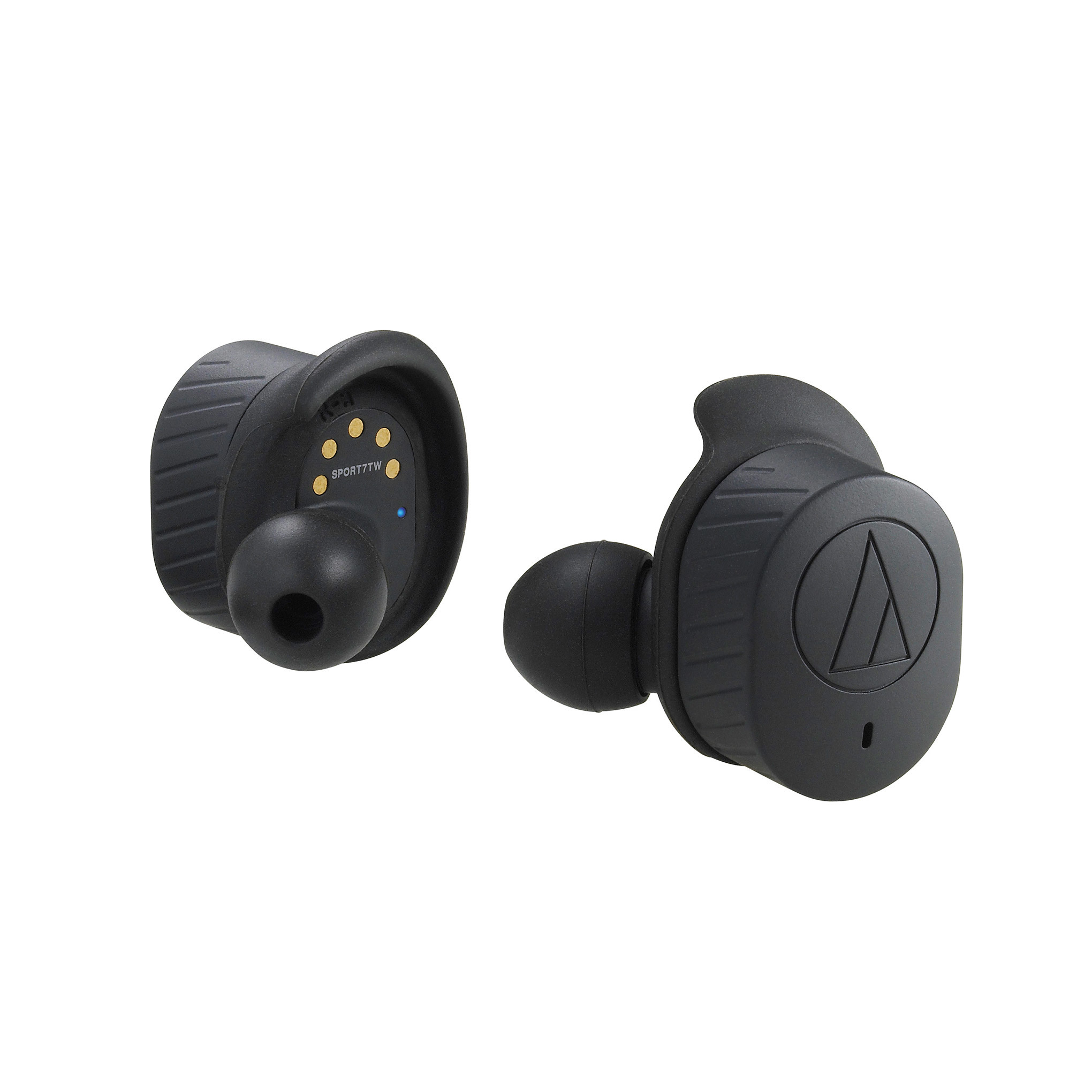 Starting with the pricier, more high-end CKR7TWs, you’ll immediately notice that these earphones come with just about the biggest case of any true wireless buds to date. It’s double the size of the case of the Sennheiser Momentum True Wireless, but it doesn’t contain a vastly greater charge: Audio-Technica promises nine hours of charge in the case, for a total of 15 with the six hours that the CKR7TWs can hold. Sennheiser’s buds can go for 12 hours with top-ups from the case, and other rivals like Apple’s AirPods and Jabra’s Elite 65ts also match or outdo the CKR7TWs. So the mystery of why this case needs to be so enormous is left unresolved. It is super tough and sturdy, mind you, so that’s a plus.

If true wireless earphones didn’t have a heavyweight category before, they do now

The high build quality of the case carries over to the individual CKR7 earbuds as well. There’s nothing about them that gives me reason for durability concerns. They are, however, quite huge and chunky in their own right. The resulting look of something bulbous overflowing your ear is not in any way attractive, and it’s a problem that’s plagued earlier true wireless and even neckbud models. Another poor design decision by Audio-Technica is to put really bright activity LEDs on the outside of the buds. So not only are they large, but they’ll also light up the sides of your face in the dark for the ultimate in indiscreet listening.

Audio-Technica’s effort here is true to the company’s reputation for designing long-lasting and durable products, but it fails on the basic requirements of elegance, subtlety, and, to some extent, comfort. Because of their bulk, I was never able to forget that I was wearing these, which runs counter to the ultimate aim of trying to minimize the physical and visual footprint of technology.

Good sound might have made all of the foregoing forgivable, but that’s the critical point of failure for the CKR7s. I choose my words soberly when I describe them as sibilant hot trash. They’re tuned with an aggressive treble and a beefed-up bass that squeeze out the mids and make for a shouty, unpleasant experience. Things like hand claps come through like thunder and there’s a metallic quality to the sound throughout, with hissy and hot “s” sounds from vocals and a pronounced lack of warmth from instruments. Bishop Briggs doesn’t sing through these earbuds; she screams. Chet Faker’s voice is nasal, as if suddenly deprived of the service of his chest. Bjork and Kendrick Lamar have to fight to be heard over their backing tracks as the CKR7s push tinkling and high notes too far forward.

You hear none of the chest in voices; everything is a little bit nasal

I understand where Audio-Technica is coming from. The company is aiming to please the Japanese listener, who prefers a leaner, crisper sound, while at the same time trying to appease people like me who favor stronger bass presence. It’s just that the final, deeply compromised result is bad. Sure, with the right track, the CKR7s can fool you into believing that they have more air and detail than their rivals, but that veneer is quickly stripped away by some outburst of high-pitched, inhuman vocals. It’s such an unhappy departure from the way the music is supposed to sound.

I can’t tell you if the CKR7TWs really do last six hours on a charge because I don’t hate myself enough to listen to them for that amount of time. When the sound isn’t right with a pair of $249 headphones, that short-circuits any further discussion of their merits. The Jabra Elites don’t have perfect sound, but they’re vastly superior to these Audio-Technica buds, and they cost substantially less. If you want the absolute best-sounding true wireless earphones, Sennheiser’s Momentum alternative reigns supreme.

The SPORT7TWs are the sonic antithesis of the CKR7TWs. Their sound signature is sweet and bassy without straying too far into the mids or overwhelming the treble. In fact, for the purposes of portable listening, the tuning of the SPORT7s is bordering on perfect. They’re both relaxed enough to be listened to for many hours without fatigue and exciting enough to convey the full energy and drive of your gym playlist. Don’t ask me to rationalize how the same company could come up with some of the best and worst tuning in contemporaneous models.

The good news extends to the design of the SPORT7s as well: they have a smaller case and a much more discreet look than the CKR7s when they’re in the ear. Audio-Technica has come up with some unique fins that you tuck inside your ear to secure the SPORT7s in place, and those work brilliantly. When I get these earbuds seated in place properly, their snug fit isolates exterior noise well, guarantees they’ll never fall out accidentally, and just feels good to wear. With an IPX5 water (i.e., sweat) resistance rating, these might have been one of my top picks for exercise headphones if it weren’t for one fatal flaw.

This is a matter of multiple fail points. Firstly, the advertised maximum of 3.5 hours of playback off a single charge is, if you can believe it, optimistic. In a year when we’re going to see true wireless buds approach the 10-hour mark for autonomous use, the SPORT7s are lagging way behind with the three hours that I was able to get out of them. That’s compounded by the need for two full hours to charge them up again inside the case. It takes three hours to refill the case, which nominally holds 14 more hours.

When you replace the buds back inside the case, they should automatically switch themselves off and start charging. However, something must have gone amiss with that function because I notice them draining the entire case’s charge in far less than the promised total of 17.5 hours. On one occasion, I took the earphones out of their case and went out for a 44-minute walk, listening to Joe Rogan’s podcast with Brian Cox. Then I returned home, left them in their case, a few hours later picked them up to continue the podcast, but only got another 44 minutes out of them before they tapped out.

A hyper-rosy outlook on the SPORT7s might be to think that most people’s workout sessions will be briefer than these buds’ constrained battery life and the good sound and lovely fit are worth the trade-off. Maybe. But I also can’t tolerate the illogical and awkward touch controls, and I can’t say I enjoy the random Bluetooth dropouts I suffer with these earphones.

Audio-Technica can do better than this, and we should expect better, too

Upon taking the buds out of their case, their touchpads are “locked” until you position them in your ear and tap the right one to “unlock” them. The only way I could learn that was by going through the manual, which is also where I had to look up the precise tap area I needed to hit and the way the Hear-Through mode for ambient sound awareness was enabled. Before I went to the paperwork, all I could get from my taps were various uninformative beeps. Despite the supposed touch lock function, I often found myself activating the buds accidentally while still seating them in my ear.

Even once you know the controls, though, you’ll regularly miss the particular touch-sensitive area of the SPORT7s, and the lag of their response to your input will make you repeat taps unnecessarily. Yes, there’s a voice assistant function you can activate, so that’s nice to have, but the only way you’ll control these in any sort of intuitive and logical fashion will likely be directly via your connected phone.

My experience with Audio-Technica’s first two forays into the true wireless earphones market is a good reminder of the fallibility of brands. Every new product and category is as much a threat to one’s reputation as it is an opportunity to enhance it. In the case of the CKR7TWs and SPORT7TWs, Audio-Technica unfortunately fails more than it succeeds.

These true wireless earphones don’t support the most modern standards like USB-C and AptX HD, they don’t have outstanding battery life, their design is bulky, and their prices are high. Knowing Audio-Technica’s quality standards, I expect a much-improved second effort, but until that comes, these first editions are impossible to recommend.