An exclusive look at an original iPhone prototype

Apple’s red iPhone M68 in all its glory

Share All sharing options for: An exclusive look at an original iPhone prototype

“This is a day I’ve been looking forward to for two and half years,” said Steve Jobs, Apple’s late CEO, as he introduced the original iPhone on January 9th, 2007.

Apple had developed the iPhone in secret over those two and a half years, and for many inside the company, the device had only been known by the codenames “M68” and “Purple 2.” Apple was focused on surprising everyone with the iPhone, and that meant that many of the engineers working on the original handset didn’t even know what it would eventually look like.

This iPhone prototype looked a lot like a PC

To achieve that level of secrecy, Apple created special prototype development boards that contained nearly all of the iPhone’s parts, spread out across a large circuit board. The Verge has obtained exclusive access to the original iPhone M68 prototype board from 2006 / 2007, thanks to Red M Sixty, a source that asked to remain anonymous. It’s the first time this board has been pictured publicly, and it provides a rare historical look at an important part of computing history, showing how Apple developed the original iPhone.

At first glance, the red iPhone M68 prototype board looks like a motherboard you’d find inside a PC from more than 10 years ago. It’s roughly the same size, but the components are a little different. Apple developed this particular board, an engineering validation test (EVT) sample, for engineers working primarily on the software and radio portions of the original iPhone. These developers wouldn’t know the final form of the iPhone, and sometimes these boards were even supplied without the screen you’ll see attached in our exclusive photos. Apple only uses red printed circuit boards for its prototype iPhone hardware, favoring blue, green, and other colors for production units. 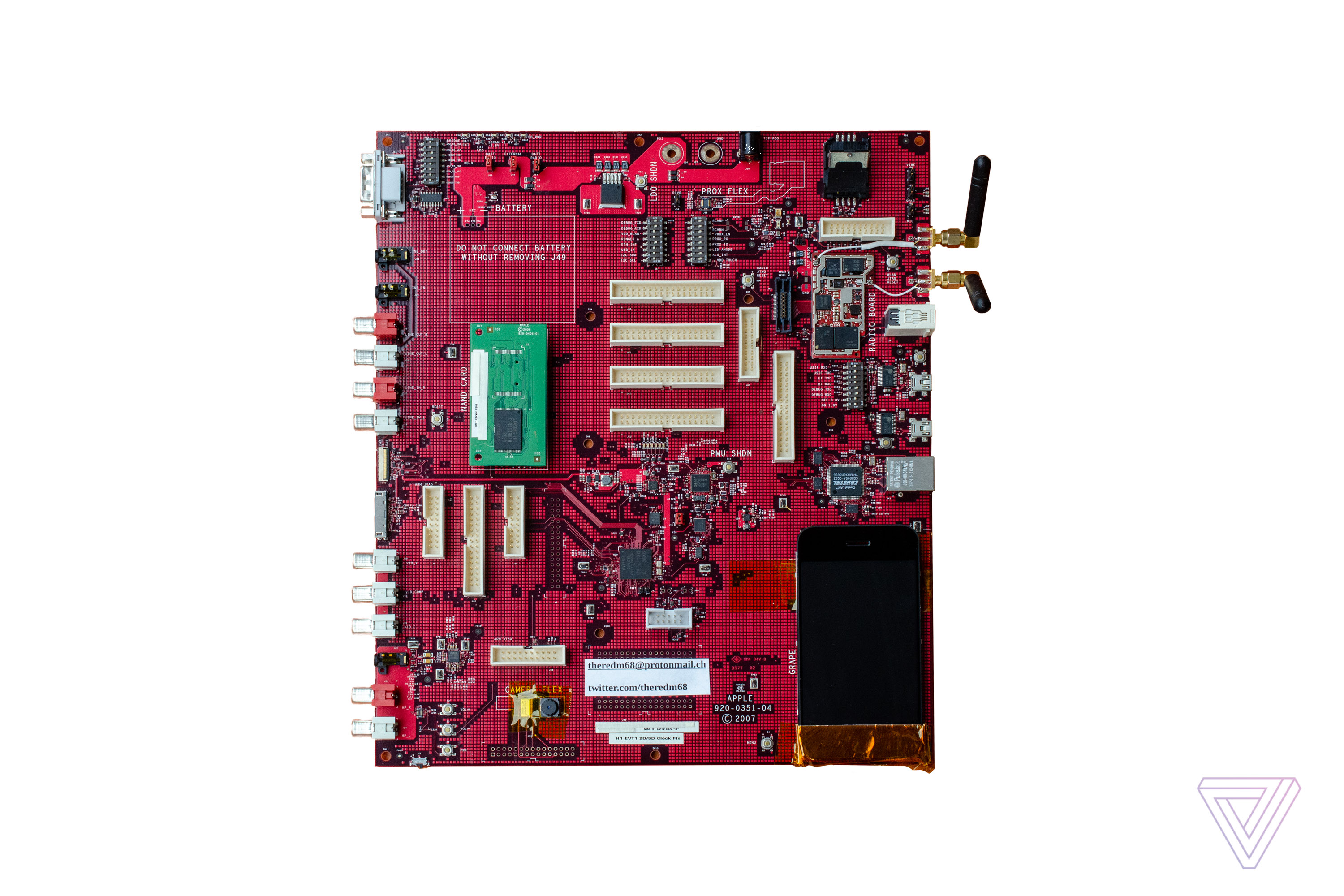 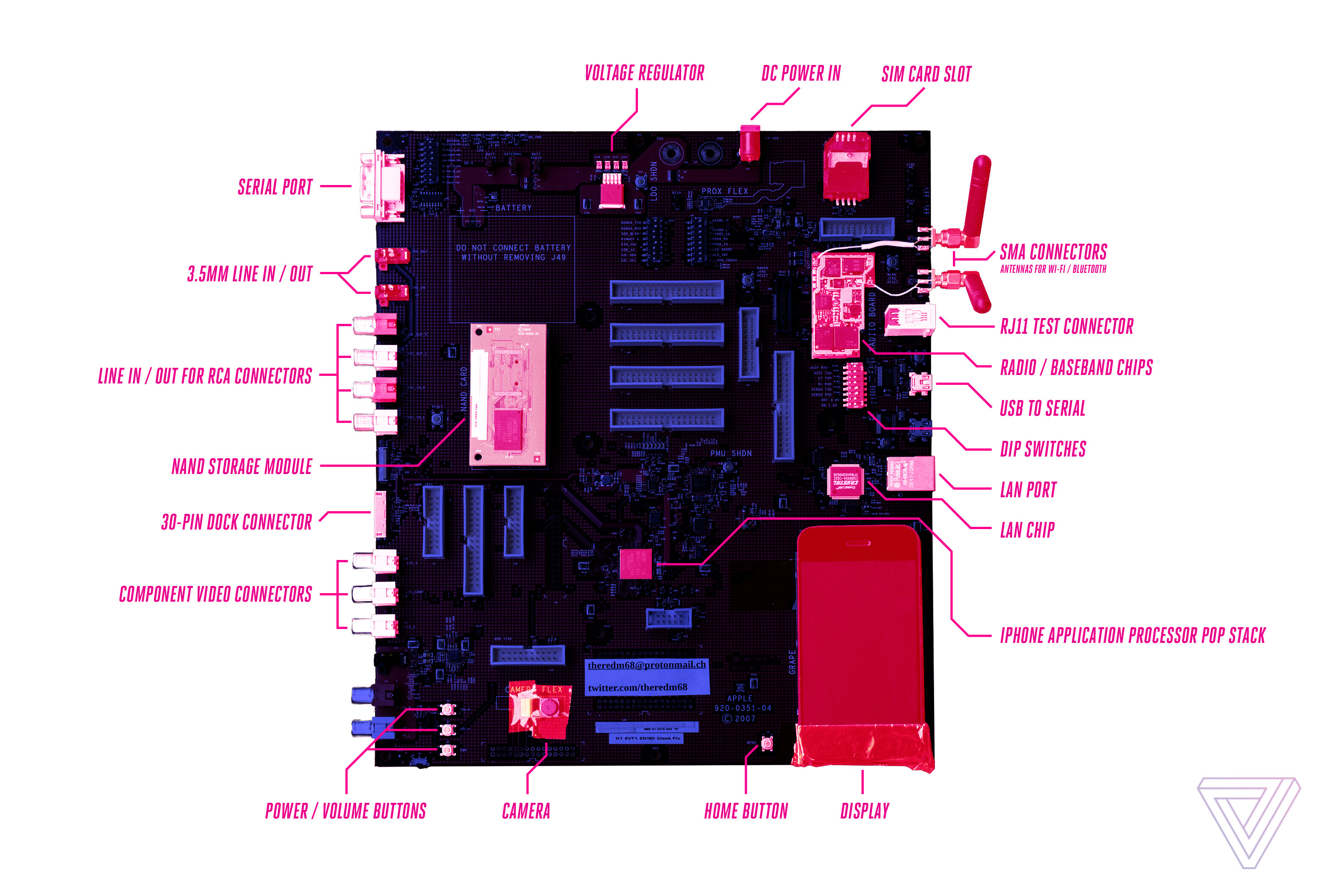 Graphic by Will Joel / The Verge

While there’s no giant fan to cool the processor or banks of memory, the prototype does share some similar components to older PC hardware. There’s a serial connector at the top that was used to test iPod accessories since the iPhone also used Apple’s 30-pin connector, and there’s even a LAN port for connectivity. Two Mini USB connectors flank the side of the board, which were used by engineers to access the main iPhone application processor and radio (baseband). Apple engineers could use these Mini USB ports to code for the device without ever seeing the screen.

Most of the engineers working with a board like this would have been responsible for porting Apple’s underlying Darwin operating system over to the iPhone. Darwin is a Unix-based operating system that contains a core set of components that help power macOS, iOS, watchOS, tvOS, and audioOS. Apple referred to the developers who worked with Darwin as “Core OS engineers.” They were responsible for the kernel, file systems, device drivers, processor architectures, and a host of other important low-level platform work. These engineers made sure all of the very important hardware and connectivity worked flawlessly.

The rest of the iPhone prototype board is very different from a regular PC. At the top, you’ll see a SIM card slot, and nearby, there are two antennas for Wi-Fi and Bluetooth connectivity. These connect back to the main radio I/O board, which looks identical to how it shipped in the final original iPhone. This radio board includes chips from Intel, Infineon, CSR, Marvell, and Skyworks, showing just how many companies Apple had to partner with to ship the original iPhone.

To the right of the radio board, you’ll see an RJ11 port, which is the same registered jack that’s used by regular landline phones. Apple used this so that engineers could plug a regular landline phone headset into this iPhone development board and test voice calls. You might be able to take calls on your wrist these days with the Apple Watch, but imagine the thrill of making a call from a prototype iPhone development board back in 2006.

At the center of this prototype board is the heart of the iPhone: Apple’s application processor. Identified as a Samsung K4X1G153PC part, Apple used Samsung memory stacked with a 620MHz ARM processor (ARM1176JZF) to run the iPhone operating system. It’s an integrated circuit packaging method known as package on package (PoP), where the CPU is packaged on the bottom and memory on top. Apple pairs this with a 4GB Samsung NAND card (K9HBG08U1M) for storage of the OS. The green NAND storage module is easily removable for developers, allowing them to quickly test different operating system versions and changes by simply plugging a new card in.

On this particular development board, there’s even a screen, but the iPhone’s home button (known here as the menu button) is mounted on the board to the left of the display, and the power and volume buttons are on the left-hand side of the board. We got a chance to boot this prototype, and it simply powers up to the Apple logo. Engineers using this particular board would have booted into something similar to a command prompt to test kernel changes. Our source explains that you can also attach this to iTunes, via the 30-pin connector on the side of the board, and it detects it as an iPhone ready to be restored.

Elsewhere on this board, you’ll see lots of white connectors with pins. The smaller ones are JTAG connectors used for low-level debugging. Engineers could connect signal probes to some of these connectors to monitor various signals and voltages, allowing developers to test key software changes to the iPhone and make sure they weren’t negatively impacting the hardware. Having all of the components available to test on a blown-out board like this also made it far easier for engineers to make a change and test it, instead of inside a phone shell where you can’t easily access components with probes. There are also a variety of DIP switches to route debug signals around various parts of the board for further testing.

If an engineer inside Apple received a development board like this without a screen, component video and RCA connectors on the side of the board could be used to connect it to a display. Engineers could also test headphone connectivity, thanks to stereo line out ports on the side. Even the iPhone’s main camera is mounted on the board for testing, and there’s a giant space left to test the battery. If engineers didn’t have a battery connected, a DC connector at the top can be used for external power. Apple also left room for what is marked as “prox flex” for proximity sensor testing.

It’s clear from this iPhone development board that Apple thought of everything for engineers in the months ahead of its iPhone unveiling. Similar boards would have been used in 2006 and throughout 2007 in the lead-up to the June 29th launch of the original iPhone.

Apple no longer uses such big boards for its iPhone development these days. The company moved on to smaller boards for the iPhone 4, with big and bulky security shields on some more recent iPhone models. That allows iPhone developers to work on the final form hardware in a case while the design is kept secret. A number of other phone makers also use similar giant cases in the final development phases to keep things under wraps.

This early prototype is a great reminder of the immense work and secrecy that went into creating a device that millions of people now carry in their pockets every day. It’s rare to see such early examples of hardware like the iPhone, especially more than 10 years after it was first developed.