A good step up from the basic iPad

There sure are a lot of different iPads now. Last week’s announcement of a new iPad Air and iPad mini means that Apple’s tablet lineup includes five different screen sizes, each of which has its own storage or LTE options on top of that. Apple has an iPad at price points that range from $329 for a basic iPad all the way up to (an absurd) $1,899 for a maxed-out 12.9-inch iPad Pro.

If you’re trying to choose among them, you might think that’s too many iPads, but I think there’s a surprising amount of coherency to the lineup. More importantly, there’s a clear standout best choice for people looking to get more than the basics without spending iPad Pro prices. That choice, if you haven’t guessed, is the new iPad Air.

Starting at $499, the iPad Air brings all of the features that actually matter to most people down to a price point that’s much more reasonable. It’s also just an excellent tablet on its own merits, but you probably could have guessed that on your own. 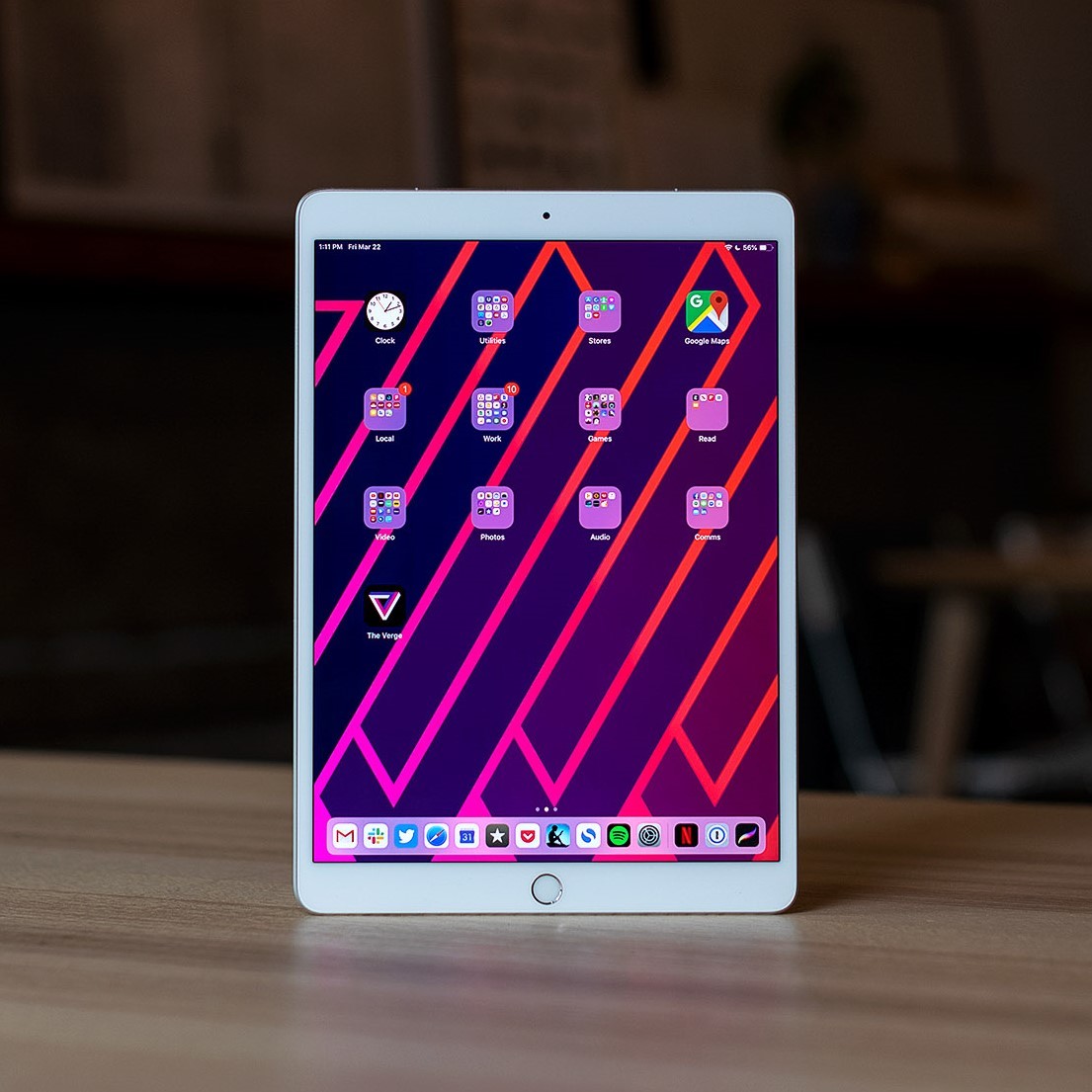 The new iPad Air feels instantly familiar. It has the same basic iPad form factor we’ve been living with for years and years. The screen is surrounded by bezels that look large in 2019 but really aren’t too bad, with a physical Touch ID button on one side and a camera on the other. The back is tapered to the edges, making the whole thing feel thinner, and I really like that there’s no camera bump to speak of.

What’s “new” about the Air is the screen size: 10.5 inches. That’s slightly bigger than the basic iPad, but it’s exactly the same size as the old (and now-discontinued) 10.5-inch iPad Pro from 2017. That means the body is slightly larger than traditional 9.7-inch iPads — not enough to really feel but just enough to make your old cases incompatible.

The screen is great, though. It’s a clear step up from the basic iPad and not just because of the slightly larger size. It’s laminated to the glass, which means that there’s nearly no air gap between where you touch and where the pixels are. It also supports Apple’s True Tone technology, which adjusts the color temperature of the screen to the lighting in the room you’re in. It’s subtle, but it really works, and I really do miss it when I look at another screen.

The theme of the iPad Air is that it takes the features you actually would have wanted from an iPad Pro and brings them down to a more reasonable price point. That absolutely applies to the screen. The Pro-level iPads have two things this iPad Air lacks: larger, fancy curved-corner screens and Apple’s ProMotion technology for varying the display’s refresh rate to make scrolling ultra smooth. Both of those things are very nice, but neither is the sort of thing I’d tell you to spend hundreds of dollars more to get.

I came to this iPad Air after a couple of years of using that old 10.5-inch iPad Pro, and it’s so similar that I hardly noticed the change. There is one thing that’s disappointing by comparison, though: the speakers. Apple reserves having four speakers (two on each side) for the Pro models, and it was weird to only have sound coming out of the right-hand side while watching movies.

In fact, if you can find that (now-discontinued) 10.5-inch iPad Pro for a discount (or at the same price), I’d probably recommend that you snap it up instead of this iPad Air. It’s basically the same thing but with a couple extra speakers. (I think the processor difference is a wash.)

The iPad Air has the same A12 processor as the latest iPhones, and in use, that means everything felt snappy and fluid, even when multitasking. Battery life has been really great, too. There are cameras. They are definitely fine, but not good or bad enough to worry about. (Your phone cameras are almost surely better.) The iPad’s cameras are perfectly adequate for “scanning” pictures of documents, which is where they make the most sense anyway. You really don’t need me to tell you much more about what the experience and performance is like because it’s great. It’s an iPad.

That said, I still think iOS 12 doesn’t make the case that it can replace your Mac or Windows laptop, but that conflict isn’t as angsty on the Air as it is on the Pro. At this price, you don’t really have to worry about all of that. We’ll argue about this all over again when iOS 13 comes out, but until then, let the iPad Pro people kvetch about it.

The other formerly “Pro-only” feature you get on the iPad Air is a keyboard connector. I still think it’s dumb that the basic iPad still requires a Bluetooth keyboard, so I’m really glad it’s available here. It uses the old “Origami”-style Smart Keyboard, which still costs a whopping $159. It’s not backlit, but it’s great to type on (better than a MacBook!), and I love that it allows you to position the iPad in both easel and drawing modes. The new iPad Pros can’t do that, which is nuts.

You also get support for the Apple Pencil, but it’s the first-gen Pencil with its silly cap, silly charging method, and silly proclivity to roll off any surface you set it on. The Pencil still retails for $99, too. It works well with this iPad, but if you really want a stylus and don’t think you’ll miss the pressure sensitivity, I think the Logitech Crayon might make more sense.

A word about the Lightning connector: I think the vast majority of people who will buy this iPad Air will be very happy that it uses Lightning and not USB-C. They likely will have iPhones or will be upgrading from an older iPad, and so they will have one less new cable to worry about. Lightning is a great plug: it’s small and durable and simple.

I am not in that majority, though. It’s silly to claim that USB-C is a “Pro” feature reserved for “Pro” iPads. It’s a common plug now on a wide variety of devices from headphones to laptops to every single modern Android phone. I understand why Apple didn’t want to inflict that transition on potential iPad Air customers, but I also would like the entire industry to just get this transition done and over with. Lightning is great, but it would be even better if I could use the same fast-charging cable and brick I use to charge my MacBook to charge this iPad.

Speaking of ports, the iPad Air has an honest-to-goodness headphone jack. As it should.

Before this Air, buying an iPad led to a difficult choice. The basic iPad was (and is) very good, but if you wanted to step up and get something with a keyboard connector, the Pro used to start at $649. Now, the Air is a very obvious and very reasonable upsell. At $499, you get almost all of the “Pro” features that really matter in day-to-day use.

Compared to the new Pro, these bezels on the Air sure are big, and not having Face ID on an iOS device is starting to feel a little antiquated. But those futuristic hardware features don’t really do that much more for people, and you’ll only miss them if you already have an iPad Pro. The only thing you’re missing out on is having a tablet that feels like it comes from the future. It doesn’t mean the tablet you have today isn’t excellent.

With the iPad Air, most of the features that most people really want from a Pro machine become available without paying Pro prices. The iPad Air floats in the middle of the iPad lineup, and if you can afford it, you should get it over the basic iPad.

I initially had a lot of questions about what “Air” meant after Apple brought back the moniker for this iPad and the MacBook Air. But after using this iPad, I think I finally get it. This is what Air is supposed to mean now: the best all-around choice for most people.