Late last year, Nvidia released its new RTX graphics cards for desktops, showcasing more power, new lighting effects capabilities, and sky-high price tags. Less than half a year later, the first mobile RTX graphics cards are arriving in laptops, like the new MSI GS75 Stealth. Unsurprisingly, the mobile options aren’t as cut-and-dried as you might hope. There are, in fact, five different RTX cards designed for laptops: the 2060, 2070, 2080, and the lower-power Max Q variants of the 2070 and 2080. (Currently, there aren’t any Ti versions of the RTX mobile cards, but that could change in the future, complicating matters even more.) This can make choosing your next gaming laptop a challenge.

Before looking at the real-world gaming performance of an RTX mobile GPU and how it performs in a specced-out testbed like the MSI GS75, we first need to know what the differences are between Nvidia’s current and last-gen graphics cards, the Max Q versions, and desktop GPUs.

The main difference between Nvidia’s Pascal (GTX 10 series) and Turing (RTX series) is that the latter generation has RT and Tensor cores, enabling features like ray tracing (realistic lighting and reflections) and DLSS processing (a deep neural network for anti-aliasing and improving image quality) to make the worlds depicted in-game more realistic. Nvidia’s last-generation GTX cards simply don’t have the microarchitecture to use those features. If you want to ensure your machine’s capable of keeping up with future games while also being capable of displaying the newest eye candy, then an RTX series GPU is your only choice. We found this out first-hand in our RTX desktop series review.

Our review of MSI GS75 Stealth 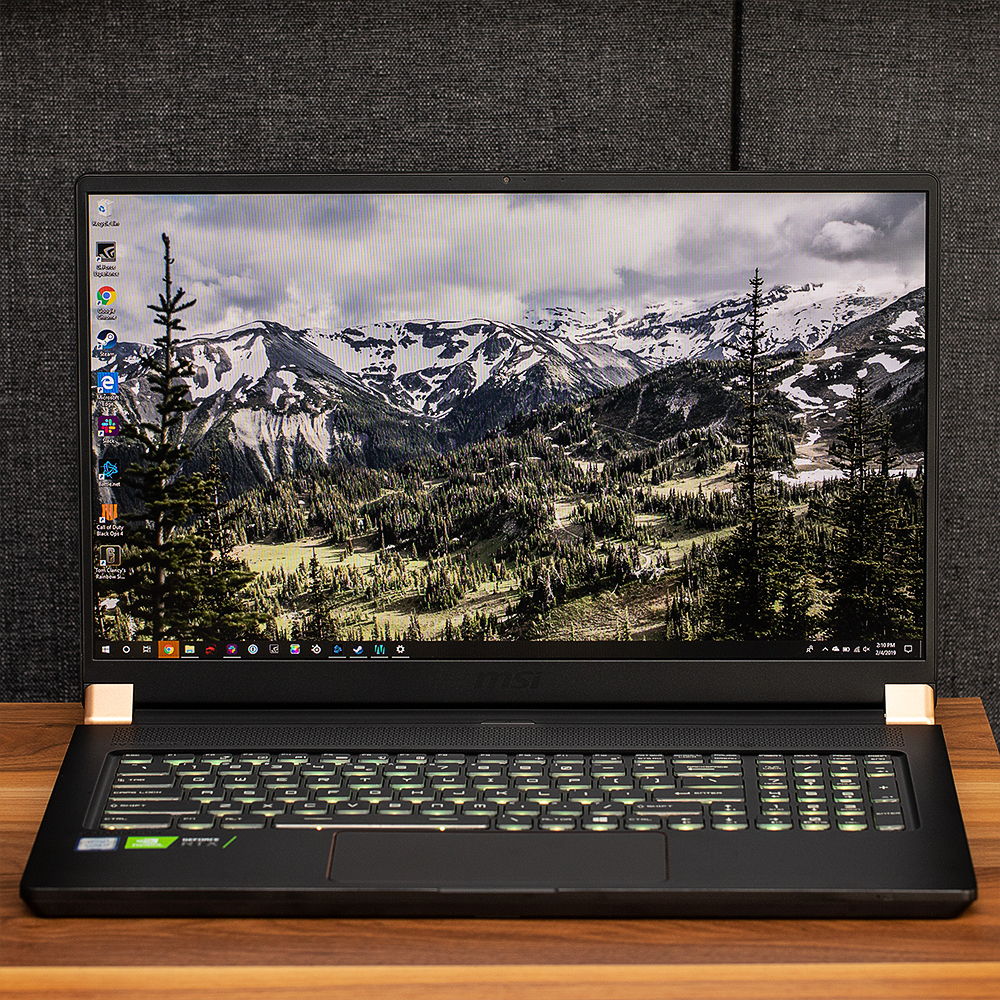 What about mobile RTX GPUs? Besides the obvious size constraints of fitting a cumbersome desktop graphics card inside of a laptop, there’s the question of thermals. The thinner chassis of laptops leave far less room for airflow and cooling, much less a liquid-cooled setup. Keeping the chip and surrounding areas like the keyboard deck or base of the laptop cool, or at least at a safe operating temperature, is even more important.

there are Five different RTX mobile GPUs to choose from

To make RTX graphics work for mobile computing, Nvidia had to downclock the GPU clock speed (reducing processing power), lower their power consumption, and only use the discrete GPU when absolutely needed. There are also those quality-of-life features, such as enhanced chassis cooling and a decibel limit for fan noise (a feature called Whisper Mode). Altogether, Nvidia’s optimizations enabled performance on the laptop chips that’s similar, but not equal to that of the desktop version.

In terms of power consumption, a desktop-class RTX 2080 Founder’s Edition card draws up to 225 watts, the mobile version consumes 150W, and the Max Q variant draws just 80 watts. Those are high numbers (a specced-out 15-inch MacBook Pro uses an 87-watt wall charger to power everything, for example), but they aren’t out of line for dedicated gaming laptops. For most high refresh rates and 1080p laptop screens, even the Max Q version has more than enough power to sustain playable frame rates at native resolutions.

The trade-off is that most current gaming laptop displays lack HDR, response times, and the high resolutions that you might find on a desktop QHD or 4K monitor. Plus, they generally struggle to reach high frame rates when connected over HDMI or Thunderbolt to higher-res external displays. A few gaming laptops come with 60Hz 4K screens that aren’t truly meant for gaming but are better suited for creative work, like video editing. For those purposes, an RTX GPU can assist with export times, but it will struggle with playing games in 4K.

These past few weeks, I’ve been testing the MSI GS75 with an RTX 2080 Max Q GPU to see how it stacks up against its desktop counterpart. If it also manages the fragile balance between on-the-go battery life and high-end gaming performance while plugged-in, then it could effectively replace your desktop.

RTX laptops can be quite expensive

The GS75 I’ve been using is priced at an eye-watering $2,999, and it’s loaded with a 512GB SSD, Nvidia RTX 2080 Max Q graphics, and a generous 32GB of RAM. Other important specs, like the 144Hz IPS screen and Intel Core i7-8750H processor, come standard with every GS75 Stealth configuration.

The first thing I did when I unboxed the GS75 was download the latest graphics drivers and games. Here’s what I found out by playing some new and popular AAA game titles.

As of early March, only two PC games support DLSS and DXR, with more on the way

As of March 2019, Battlefield V and Metro: Exodus are the only two PC games that support the ray-tracing and Deep Learning Super Sampling (DLSS) features that are exclusively supported by RTX cards. I started Battlefield V by joining a 64-player multiplayer server with graphics settings set to ultra, ray tracing on, and DX12 enabled.

The GS75 averaged 72 frames per second, but it dropped to the lower 50s during intense firefights. However, with ray tracing off, I was able to gain 15 to 20 fps back at the cost of slightly less impressive lighting effects. It’s a fair trade-off, considering a 1080p screen doesn’t have the level of detail needed to truly appreciate the feature that QHD (1440p) and 4K (2160p) displays do.

The second DLSS / DXR-enabled title, Metro: Exodus, is a little bit more complicated because its highest graphics setting isn’t “Ultra” like most other games. Instead, it’s a higher setting called “Extreme.” Graphics hyperbole aside, running at native resolution with DXR / DLSS enabled and settings cranked up to “Extreme,” the GS75 maintained 55 frames per second. That’s lower than the 60 fps ideal target for first-person shooters, but it’s still impressive considering the high requirements of the game.

Plus, those numbers improve by 15 to 20 fps if graphics settings are turned down to “Ultra” (the differences between the two are minimal, due to the 1080p panel) or when ray tracing is disabled. With a less demanding preset, the GS75 hit 72 fps with DLSS / DXR enabled and graphics set to “Ultra.” That’s more than good enough for a smooth, enjoyable gaming experience.

Excellent 1080p performance, with or without ray tracing

But what about all of the games that don’t have ray tracing? The RTX 2080 Max Q card crushes some titles while delivering favorable performance in others. All of these games were running at their highest settings and at 1080p HD resolution. The multiplayer title League of Legends can be locked to 144 fps; EA’s Anthem runs at a steady 75 fps; Call of Duty: Black Ops 4 cruises at 110 fps in battle royale mode; Fortnite hovers around the 89 fps mark; and Star Wars Battlefront II reaches a playable 77 fps.

Still, the RTX 2080 Max Q struggles when it’s connected to an external 4K monitor. A graphically intense game like Anthem runs at just 22 fps, with settings on ultra. Less demanding games like League of Legends will produce better results in 4K, but don’t expect the Max Q variant to perform as well as the desktop card does at these higher resolutions.

As one of the higher-end mobile options, the RTX 2080 Max Q delivers on its promise of playing popular AAA games at their highest settings (at least on the native 1080p display), even with ray tracing enabled at playable frame rates. It’s worthy of the “RTX” name, even when compared to desktop versions.

In terms of design, the GS75 is very similar to last year’s GS65, but with a larger display. It has an all-black exterior with copper highlights on the lid, fan vents, a touchpad, and hinges for an attractive yet simple design that I wish more gaming laptops would take cues from. Plus, I think the gold MSI dragon logo on the lid is a nice touch.

It is a large 17-inch laptop meant for gaming, but it weighs just 4.96 pounds (nearly a pound more than a 15-inch MacBook Pro), which is a modest weight for a laptop of this screen size. After a day or two, I forgot I was commuting with a laptop of this size in my backpack. Measuring just 0.74 inches thick, it should fit inside most large backpacks without weighing them down or being too bulky. Just make sure you also have space for MSI’s bulky 230W power brick; it’s a requirement if you want peak performance from the Max Q GPU or you plan to use the laptop away from home for more than a few hours.

While playing games on the GS75, it’s hard not to notice the hot air being expelled from the left and right side vents. If you’re in a quiet setting, such as an office, the fan noise will be noticeable. Nvidia’s Whisper mode does lower the fan noise, but it does so at the cost of performance by restricting fast-action games (like Counter-Strike) to 60 fps and “graphically intense” games (like Metro: Exodus) to just 40 fps. Even with Whisper mode enabled, the fans are still louder than the average laptop’s. The only thing more noticeable than the GS75’s fan noise is the heat in the middle of the keyboard, which is noticeable but not intolerable during long gaming sessions.

The fans are as loud as ever

Like the GS65 before it, the GS75 comes equipped with a SteelSeries-branded keyboard, this time with an added numpad for spreadsheet professionals. Despite that, it’s not ideal for productivity work.

The keys are low-profile with an ugly font, and they have soft actuation, making it tricky to tell how many keys you’ve pressed while typing quickly. The keys are also fairly small for a 17-inch laptop, which makes me think that the numpad was an unnecessary addition that ultimately hinders the whole experience. It’s better suited for gaming since you won’t be pressing as many keys at the same time, while also staying within the same general area.

It’s a gaming laptop that’s not meant for productivity

Battery life on gaming laptops is always about walking a tricky balance between size and weight and power. For laptops equipped with Nvidia’s Max Q GPUs (like the GS75), a graphics switching technology called Nvidia Optimus switches between integrated (Intel) and dedicated (Nvidia) graphics to save power whenever possible. In the GS75’s case, its 82 Wh battery died after four hours of web browsing with brightness set to 50 percent, Bluetooth off, and “Better performance” mode enabled. Perhaps I’ll come across better battery life with another RTX 2080 Max Q laptop or the less powerful 2070 / 2060 options, but the GS75 isn’t a great option if you’re looking for something to pull double duty for productivity and gaming on the go.

The MSI GS75 Stealth is for playing high-end, AAA games with all of their eye-candy features enabled. However, new RTX laptops are considerably more expensive compared to last year’s GTX 10-series laptops. (Last year’s MSI GS65 currently sells for just over half the GS75’s price.) You can get away with buying an older GTX gaming laptop and getting similar frame rates in popular games, but you’d be missing DLSS and ray tracing, features that, arguably, are going to be at the forefront of PC gaming graphics in next few years.

There will be many more RTX-equipped laptops coming out this year, across a variety of price points and spec levels. We’ll be looking at each one in turn to find the best balance of price, performance, portability, and versatility, so stay tuned for more.

How to fix Deathloop ‘stuttering’ issues on PC

Now the SEC is investigating Activision Blizzard too