Share All sharing options for: The Polestar 2’s secret weapon against the Tesla Model 3 is native Android Auto

In among the ornate (Aston Martin’s new Lagonda concept) and the obscene (Bugatti’s one-off La Voiture Noire), Volvo spin-off brand Polestar is gracing the Geneva Motor Show 2019 with a car that merits attention for its relevance as well as it looks. The Polestar 2 is a five-door, all-electric fastback coupe that carries over much of the sporty styling of the turbocharged Polestar 1, however it drops the price dramatically while adding the distinction of being the first car to feature a native implementation of Google’s Android Auto. What I saw of both in Geneva this week left me with a very positive impression.

Looking at the Polestar 2 from the outside, there’s little evidence of the pricing delta that exists between it and the supercar-rivaling Polestar 1. The 1 costs 155,000, whether in euros or dollars, while the Polestar 2’s launch model is €59,900, to be followed by lower-tier variants that drop down as low as €40,000 (roughly $45,000, with taxes included). But the looks and attention to detail in the design are high-class in both Polestar models. The Polestar 2 looks and feels like a luxury vehicle, and given its starting price, that’s to be reasonably expected.

On the interior, the car is outfitted with vegan textiles, though a ventilated Nappa leather option is also available. Beyond that, you can add a performance package, metallic paint, and 20-inch rims, and that’s about as much configuration tinkering as Polestar will allow. Much of the cool stuff about this car comes as standard on the launch model, including the bezel-less rearview mirrors, the panoramic sunroof, the touch-activated lights for people sitting in the back, and, of course, the glories of native Android Auto.

An 11.1-inch touchscreen LCD in the middle of the Polestar 2’s dash hosts Android Auto, which in turn handles most of the car’s functional controls. There’s only a scant few buttons and knobs to fiddle with. While still in prototype form, the demo I saw of Android Auto qualifies as promising. It integrates Google Maps, Google Assistant, and the Google Play Store, though there aren’t many apps you can run on it as of yet. A Polestar rep showed me how the system — whose interface is customized by Polestar, and the underlying functionality is done in partnership between the carmaker and Google — automatically resurfaces recent places the car has been as likely destinations and, moreover, calculates how much of a charge will be left once the driver reaches each location. 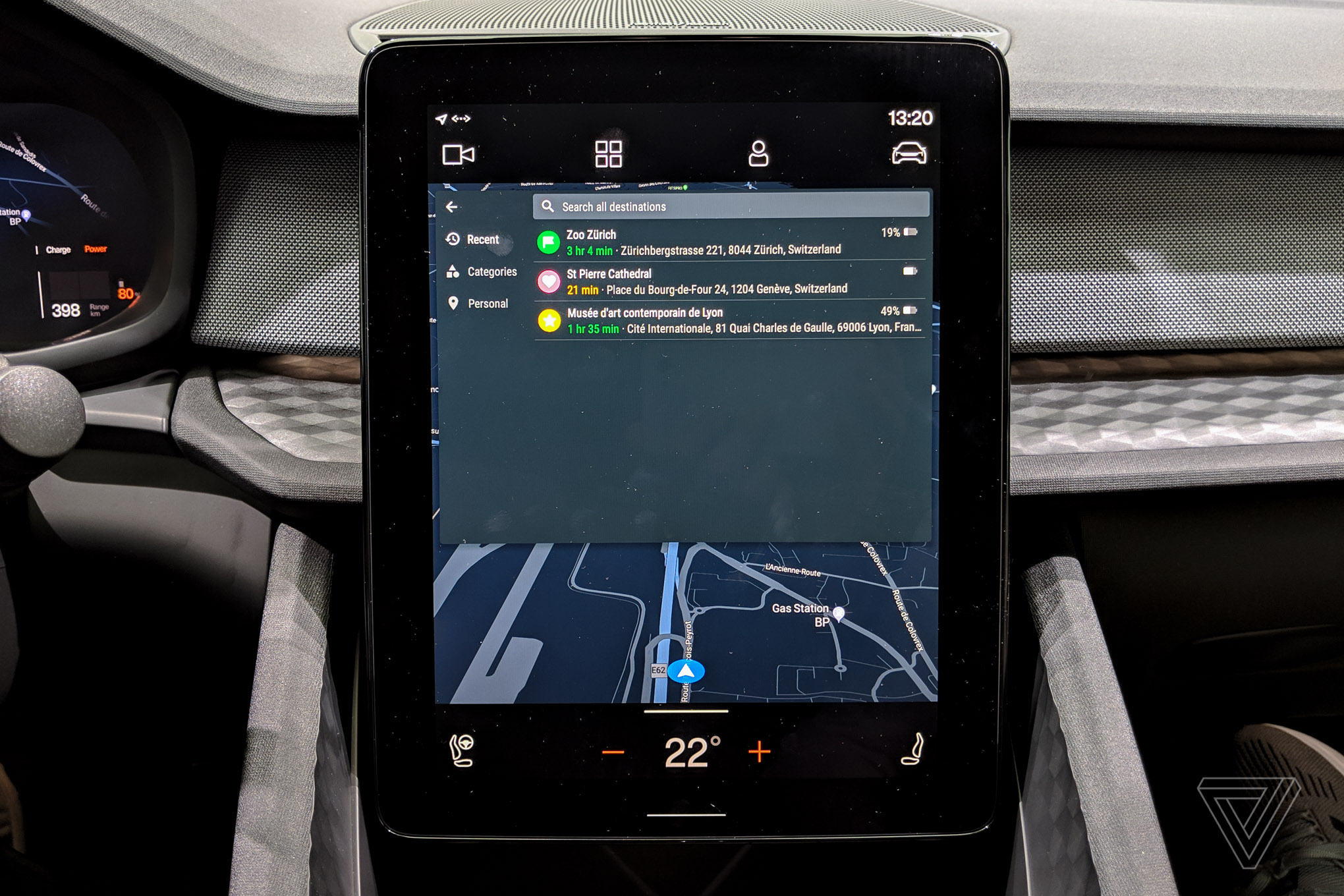 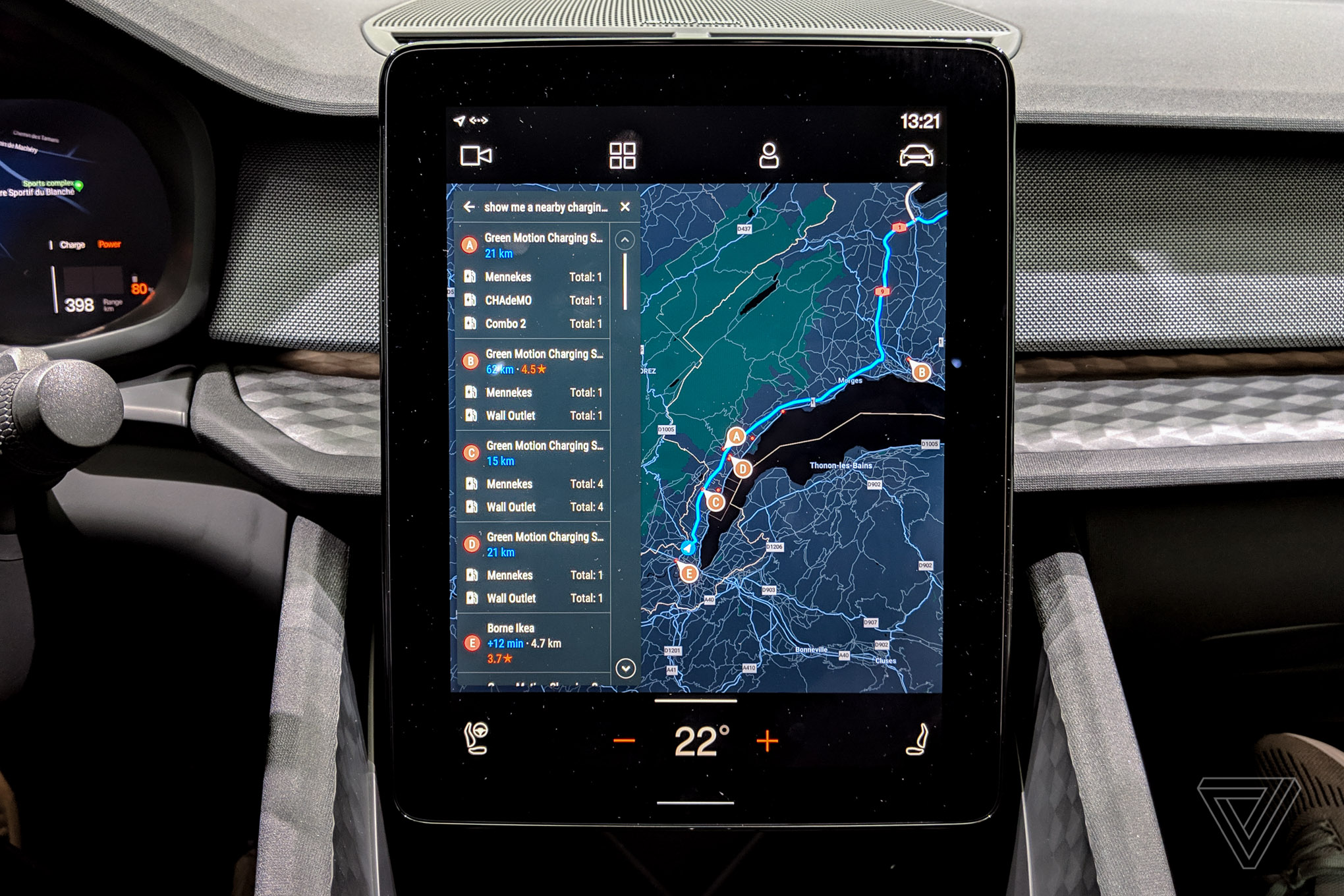 Google Maps integration and battery life estimation on the Polestar 2.

If the battery is expected to be more than 50 percent full, it’s all fine and no indication is made — because then it’s assumed you’ll have enough power to go and come back. If, on the other hand, the estimate is that the battery’s charge will drop below half, you get an indicator telling you how much you’ll have left upon arrival. This is all built atop Google Maps, which is implemented using Polestar’s colors rather than Google’s familiar beige-and-green color scheme. I’m a big fan of this collaboration, as it still leaves room for differentiation between the various car manufacturers — on the basis of providing a more intuitive UX or more accurate battery life estimates.

Spotify integration with Google Assistant works as well as I know it from the Google Home speaker. You just say “OK Google, play some Rolling Stones,” and away it goes. No added lag, no difficulty in recognizing your speech. The Harman Kardon audio system is also pretty sweet, and touch responsiveness on the vertically oriented screen looks swift. Though still an early preview of what native Android Auto will look like in the cars of our near future, this experience leaves me excited to get there as fast as possible. It’s about time car infotainment systems caught up with advances in the rest of the tech industry, and Google has the reach and resources to make that change universal.

The Polestar 2 has a promised WLTP range of 500 kilometers / 310 miles, based on a 78kWh battery that spans the entire floor of the car. Polestar claims this is more than “a battery with a chassis on top,” as the 27-cell battery’s rigidity is said to contribute to the car’s torsional stiffness and help reduce noise inside the cabin by 3.7dB. With 300kW (408hp) of power evenly split between two motors — one at front and one at the rear — the Polestar 2 can go from 0 to 60mph in under five seconds. Or that’s the goal, anyway. Almost all of the current specs for this car are accompanied by the caveat that they’re preliminary and target values.

If there’s one major frustration about the Polestar 2, it’s this car’s timeline to release. It compares favorably against Tesla’s Model 3, whether in terms of design, performance, range, pricing (Polestar has promised to detail a subscription ownership model as an alternative to an outright purchase), or the modernity of its infotainment experience. Plus, like Tesla, Polestar plans to keep improving its cars through regular firmware updates. But the Polestar 2 is still more than a year away, whereas Tesla recently started Model 3 deliveries in Europe.

You can put down money and reserve your Polestar 2 right now, but it won’t be until the middle of 2020 that deliveries of the launch edition will begin, and then it will likely be 2021 before we see the most affordable variants going on sale. Feels like a long time to wait for the future.

All of the cars, concepts, and wild ideas from the 2019 Geneva Motor Show