In a sun-drenched Arizona parking lot in late 2018, a pod-like autonomous shuttle smashed into a wall at 25 miles per hour. The glass on the sides of the shuttle shattered, the wheels buckled, and a few small pieces went flying. This wasn’t an accident; it was a test. The overall structure of the shuttle held together, which is a little surprising because it was a 3D-printed shuttle.

The shuttle, called Olli, is made by Arizona-based startup Local Motors. Local Motors is one of a handful of companies around the world that currently manufactures these low-speed autonomous pods. It aims to set itself apart by not only 3D-printing its vehicles, but also by being forthcoming about how safe they are. Today, Local Motors released the footage of two crash tests from late last year, which the company says is the first public footage of an autonomous pod crash test. While some of the footage is hair-raising, the company says it’s an important step forward in helping the public understand how safe these self-driving shuttles are.

“Many people just ask the question, ‘Well, is it safe or not?’”

Local Motors released the footage for two reasons. It wants to jump-start that conversation about the safety of its vehicles, but it’s also trying to promote its unique approach to making the Olli: 3D printing.

The two are related, according to Local Motors CEO Jay Rogers. If people are already nervous about an autonomous shuttle, they might get even more nervous when they find out it’s 3D printed, he says. “Many people just ask the question, ‘Well, is it safe or not? Like, am I riding around in something that a MakerBot printed?’” Rogers tells The Verge. “The answer is, not only is it as safe, but it will be safer in the future.”

One reason for anxiety is because pod-like shuttles that drive themselves on pre-programmed routes are already being tested on public roads right now, and on the first day of the very first trial program in the US in 2017, a shuttle got into a crash with a semi truck. Local Motors wasn’t involved in the light fender-bender, no one got hurt, and it was the human’s fault, but that didn’t stop headlines like “World’s first self-driving shuttle crashes on first day of use” or “Self-Driving Shuttle Crashes.”

Local Motors has been working on 3D-printed vehicles for around five years. We were first introduced to the company when it showed off a working 3D-printed car at the 2015 Detroit Auto Show. Since then, the company has tested over 2,000 combinations of printing material and fortifying additives, and it can print an entire Olli in roughly 10 hours (down from 44 hours in 2014). Now, Rogers says, the tech has matured to the point that it’s time for the company to start showing off the progress it’s made.

One way to do that? Slam Olli into a wall.

If you build a car, eventually you have to slam it into a wall

Chucking cars at walls has, for years, been one of the best ways to test their reliability in different crash scenarios. So Local Motors decided to set up two tests: one at 3 miles per hour and one at 25 miles per hour.

In the 3 mph test, the Olli gently bumps the wall and rebounds, neatly obeying Newton’s third law of motion. The footage is a bit boring, but Rogers says that’s good.

“It’s an achievement to have a vehicle that can survive [small] fender benders,” he says. “That is one of the federally certified tests that you have to pass, where the vehicle returns to its pre-existing state in a small bump.”

The 25 mph test is more jarring. In that footage, the Olli briskly hurtles toward the wall. It stops dead on impact, the wheels buckle, and the shuttle’s glass shatters into thousands of little pieces. But the 3D-printed frame remains almost completely intact.

Rogers realizes the shattered glass is startling, but he says the company was more focused on the performance of the 3D-printed structure for these initial tests. Also, it’s not the same kind of glass that’s being used in the Olli pods that are being tested on public roads; the company uses laminated glass on those because it doesn’t burst into pieces. The current test vehicles drive at 15 miles per hour to 18 miles per hour. That’s slower than the crash, which Rogers describes as a “worst-case scenario.” One safety feature that isn’t in the footage: Rogers says Olli pods are supposed to be able to stop short of an impact.

Glass aside, Rogers says he’s happy with the results. “What I hope we’re showing, by showing people these vehicles crashing, is that we’re doing the due diligence,” Rogers says. “We want people to see the progress.” Rogers is especially proud that the 3D-printed structure held up as well as it did. “People thought the only way to make a safe vehicle was the way that it’s always been made,” he says. 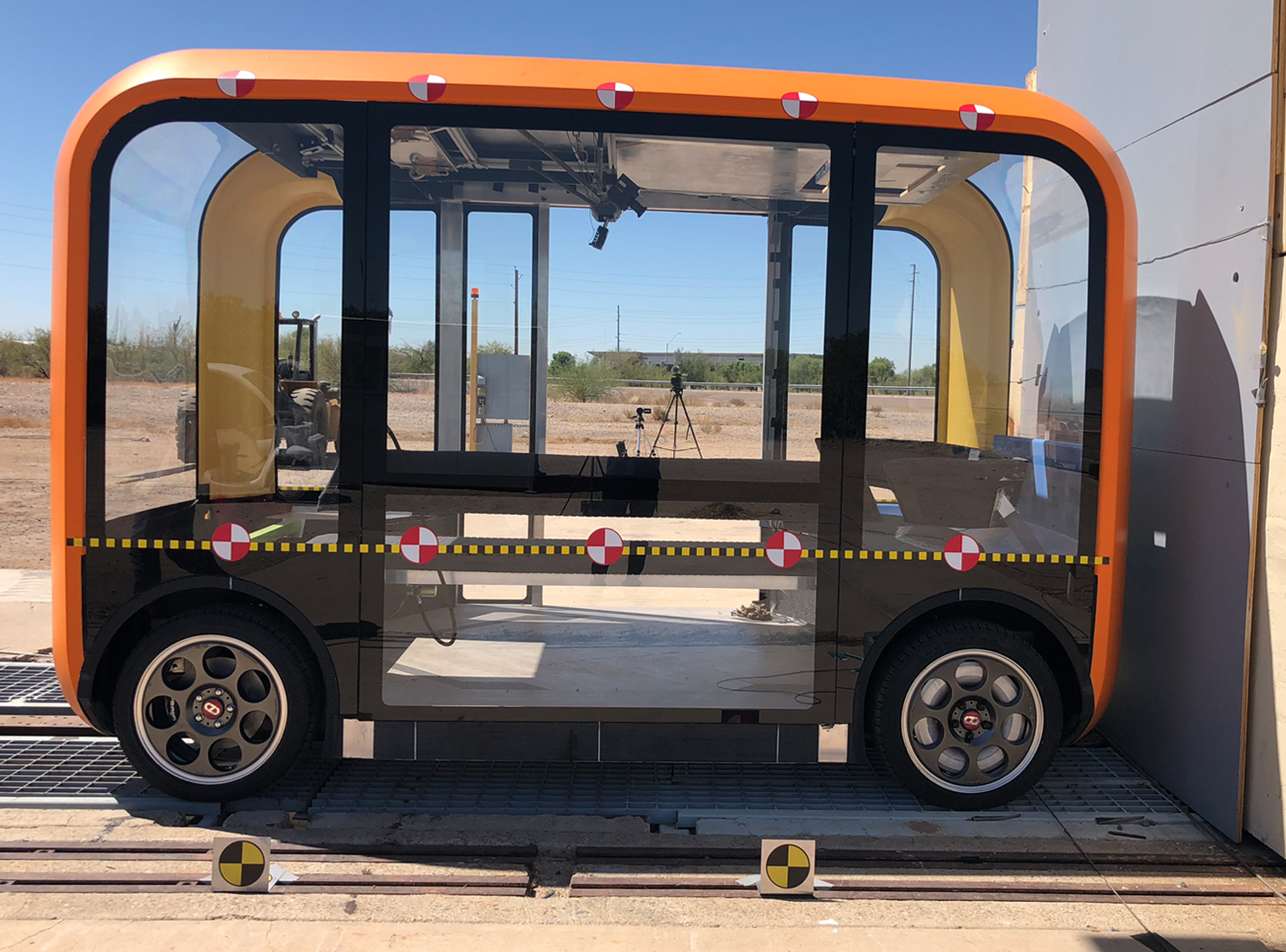 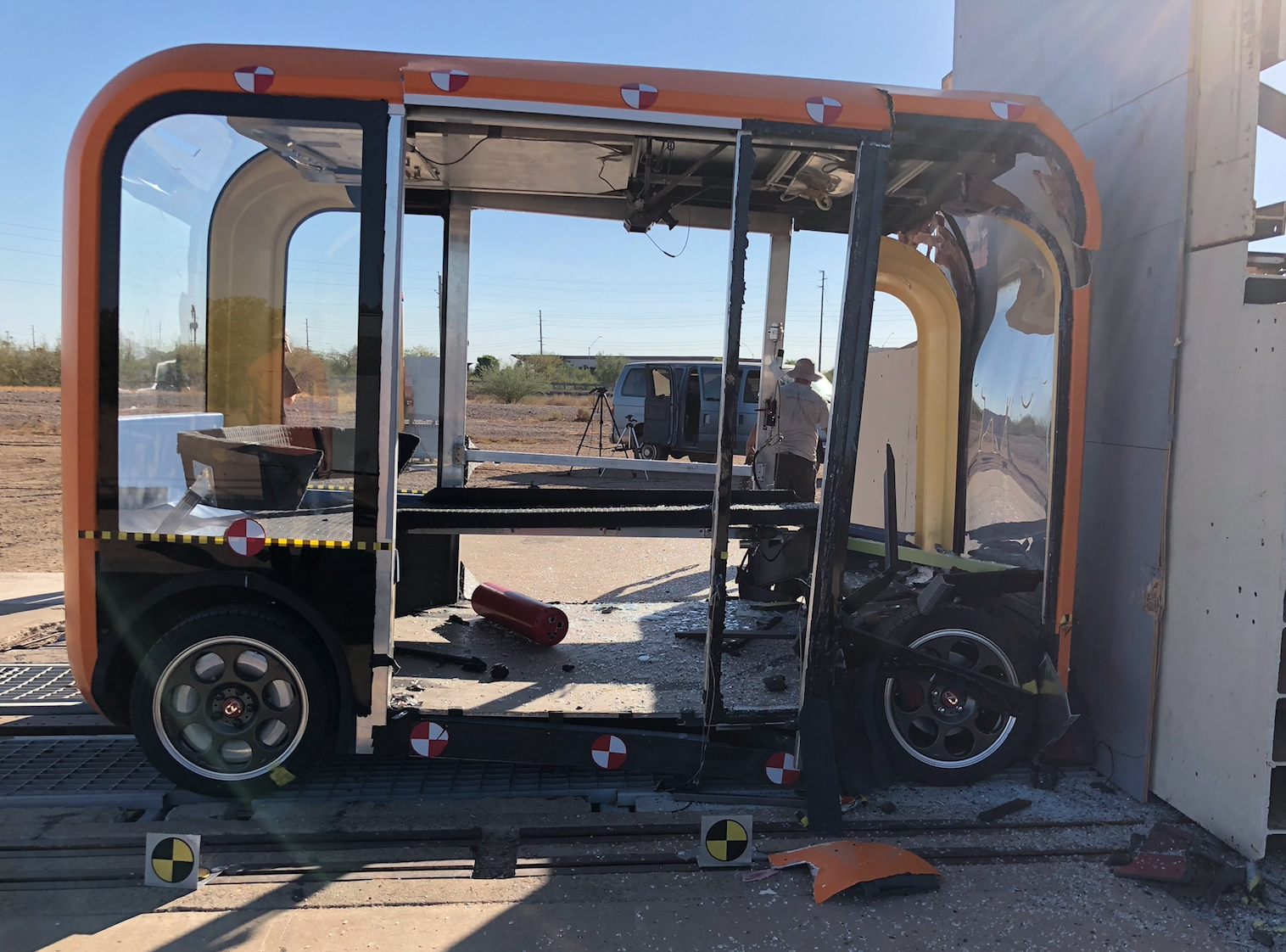 Before and after the 25 mph crash test.

Typically, when automakers reach the crash test stage of vehicle development, Rogers says, their designs are largely locked in. The companies do lots of simulation work ahead of time to make sure there are no surprises during crash testing. But if one (or more) pops up, that can be bad for business.

Still, 3D printing vehicles may give Local Motors an advantage: it allows the company to iterate quickly. Local Motors can freely tweak things in a way that traditional automakers can’t. The company can add something as big as a wheelchair ramp or as small as a fire extinguisher bottle to the design, simulate it in software, and then print a new version of the vehicle to be tested in the real world.

It also gives Local Motors the freedom to make major changes as the idea of a self-driving shuttle evolves, according to Rogers. The company can respond quickly to advances in technology, like new LIDAR sensors. Local Motors can also easily tinker with the placement of the batteries or the electronics, or add or subtract to the structure. One thing the company is already working on adding is a “crumple zone” to help in a crash, like the front bumper area or trunk of a car.

Rogers says Local Motors plans to keep updating the public on its crash test results at least every quarter, maybe more. “Our goal is to push the limit on how much we can disclose in a very meaty set of reports,” he says.

As for this first set of tests, Rogers describes it as an “oh my god” moment. Frederik Tjonneland, Local Motors’ chief engineer and the leader of the crash-testing project, was similarly struck.

“It was quite an experience,” he says. “It’s kind of the first time I think anyone has really done any kind of large-scale crash testing with a 3D-printed vehicle, so it was pretty amazing to be part of that project and kind of be on the cutting edge of that pushing the science forward.”

Mercedes-Benz acquires stake in lidar maker Luminar, will use its sensors for future autonomous vehicles