How badly do you need fewer things in your bag?

I’m excited about an AC adapter. It’s a weird thing to be hyped about, but this one is special because it is about the most cutting-edge thing you can use to charge your laptop. It’s called the Anker PowerCore Fusion Power Delivery Battery and Charger, which is more like a string of buzzwords than an actual product name. I’ll be calling it the PowerCore PD, which may or may not help you differentiate it from the other PowerCore Fusion products that Anker makes.

It costs $99.95, which is a lot to pay for a third-party (or any) charger. Why so much? First off, it uses gallium nitride (GaN) instead of silicon in its circuits, which allows it to be much smaller than comparable chargers. Second, it has a 5,000mAh battery built in, so you can use it as an external power pack. Third, it uses industry-standard USB-C Power Delivery to provide 30W of charge from the brick to your laptop. (I get hyped about weird things, okay?) Fourth, it has a second USB-A jack on it for charging a second device, providing up to 12W on that port. Its power prongs even hide away when it’s not in use, allowing it to take up less space in my bag.

Put those four things together, and you get a charging brick that can theoretically replace your old AC adapter and the external battery you keep trucking around in your bag. “One fewer thing” is a big selling point for me, so I spent the hundred bucks.

I’m less excited now that I’ve used it, but that’s mainly because, really, how excited can even a geek like me get about a charger?

Our review of Anker PowerCore Fusion 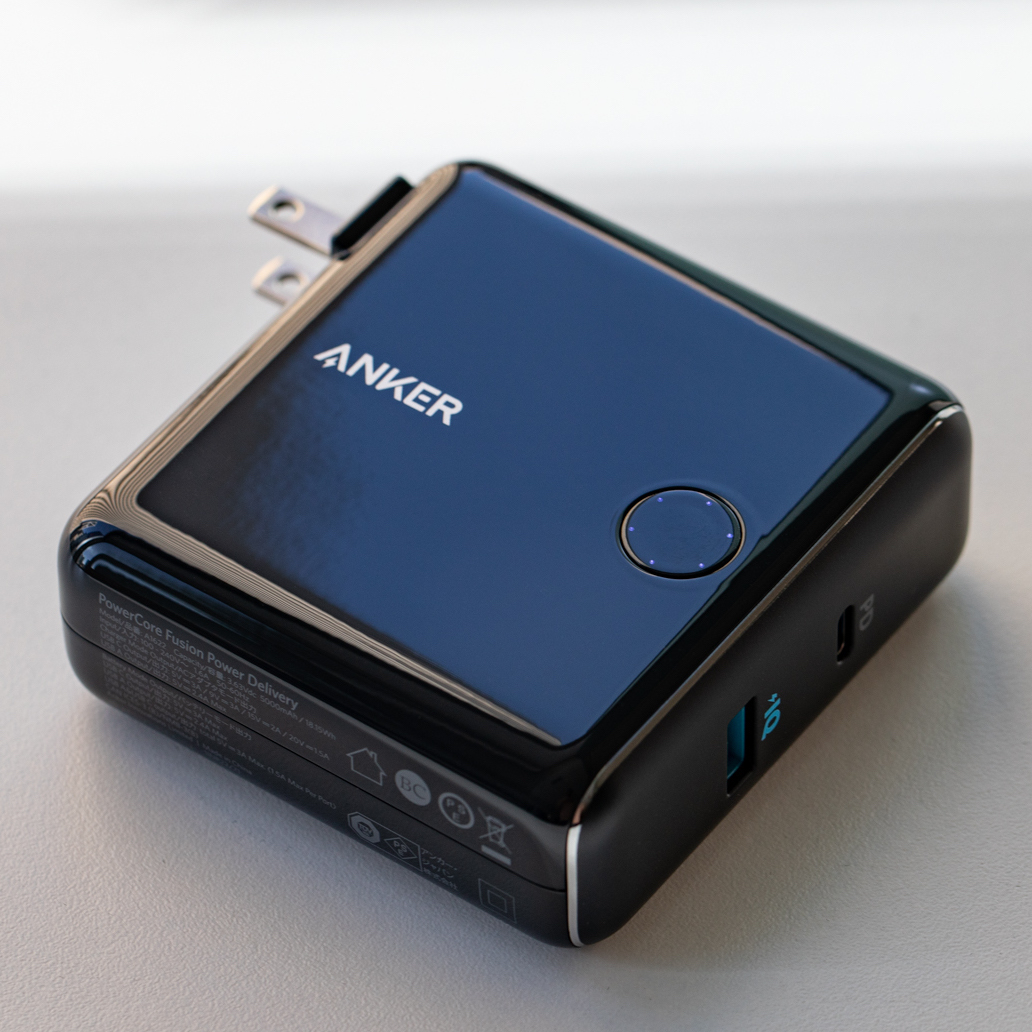 People refer to AC adapters as bricks for a reason: they’re usually big, dense, and heavier than you’d expect. The PowerCore PD isn’t an exception, despite the fact that it’s using GaN to reduce the size of the electronics inside. Measuring 1.24 x 3.37 x 3.21 inches, it’s noticeably bigger than the 61W charger that comes with a 13-inch MacBook Pro. But, again, unlike that MacBook Pro charger, this one has two ports and a 5,000mAh battery inside it.

It’s rounded and slick — as in the sides are unnecessarily glossy. There’s a fold-out set of prongs to plug it in, but you can’t attach an extender to it, so good luck finding space for it on a power strip. It also doesn’t have any accommodation for cable management, which is a little disappointing.

I’ve been using the PowerCore PD with a 13-inch MacBook Pro with Touch Bar, and I don’t really recommend it for that computer. Yes, it does charge the computer despite only providing 30W, but it’s not especially fast. It is, unsurprisingly, about half as fast as the 61W charger that comes with the laptop. It’s been able to keep ahead of how quickly the battery can drain when I’m doing something fairly intensive, but not by a ton. In the end, for my MacBook Pro, I’m going to stick with my current wall wart, an Aukey 56.5W adapter with a secondary USB-A port.

Great for low-wattage computers, not so much for “pro” computers

If you have a computer that’s less power-hungry than a MacBook Pro — say, a Windows Ultrabook, a Chromebook, or a MacBook Air — I could see a reason to buy this thing. In my case, I have one of the newer USB-C iPad Pros and a Pixelbook, and this will be the charger I put in my bag when I’m traveling with just one of them. It charges up my iPad Pro much faster than the 18W adapter that comes in the box. (For reference, Apple’s first-party 30W adapter is $49.)

As an external battery, it works just as you’d expect. At 5,000mAh, it’s able to provide enough juice to charge your phone, but one of the things you probably care about in a spare battery is pocket-ability. You can fit this thing in a pocket; it’s more chunky than my Anker PowerCore 13000 C USB-C battery pack.

On a lark, I tried to charge my MacBook Pro with just the PowerCore PD, and under even a moderate load (streaming HBO), the best it could manage was keeping the battery from draining for 30 minutes or so. That’s useful in a pinch, maybe, but, again, it’s much more useful for phones, an iPad Pro, or a lower-wattage computer.

The trade-offs you’ll be making with the (deep breath) Anker PowerCore Fusion Power Delivery Battery and Charger (phew) is that it will be larger on its own than either your AC adapter or your external battery. It will surely be smaller than the two of those things put together, but I’m not sure that’s worth $99.95 for most people.