The best GPS communicator to buy for your next adventure

Share All sharing options for: The best GPS communicator to buy for your next adventure

The number one rule for off-the-grid adventures is “Come back alive.” That’s a very good rule, but there are other important ones, too, including “Don’t make your friends and family worry about you,” “Don’t get lost,” and other well-roasted chestnuts. Thankfully, there is a family of gadgets to help you abide by all of those rules.

Unlike the phone you use every day, GPS communicators don’t require a cell signal to work. Instead, they hook into the world’s Global Positioning System (GPS) satellite network to locate your position, and another network of satellites to send and receive messages. We’re talking around 140 characters, like in the early days of SMS messaging. That may not sound like much, but it’s enough to tell your loved ones where you are (or that you’re delayed), receive medical advice, and even download an up-to-date weather report. Some even let you update social media to keep your adoring fans abreast of your adventures in near real-time if you so choose. It can also call in search and rescue virtually anywhere if the world if stuff really goes wrong.

For this piece, I tested the five most-promising GPS communicators from Garmin, Spot, Bivy, and Somewear. I’m not going to sugarcoat it: none of these devices are flawless. That said, some easily outshine the others.

Honestly, it wasn’t even close. The inReach Explorer Plus is head and shoulders above the next-best option. Let’s start with the large, easy-to-read, full-color display. It takes full advantage of this with the preloaded Delorme topographic maps. While all of the other communicators we tested require using the screen on a paired smartphone to see where you are on a map, the Explorer Plus is easily the most complete standalone unit. It’s easy to add waypoints, track back to where you began, and zoom in on details.

The on-screen menu is highly intuitive, and that’s a potentially critical feature. If you’re in a survival situation you are not going to want to (or potentially even be able to) remember a puzzling series of commands or pull out an instruction manual. You may not even be able to pull out your phone. It’s all highly visual, and, again, everything you need is right on the device itself. Just hit the Weather icon for a super detailed weather forecast. Not sure which way you’re facing? There’s a digital compass. Want to follow a route you programmed before you left or update your Facebook or Twitter? All doable from the device itself, no phone required.

The Explorer Plus can pair with your phone, but it can also be easily used on its own

That said, it does pair with your phone, which makes the texting experience a whole lot better. On the device, you have to use the four-way D-pad to select one letter at a time (or choose preset responses), which is slow and laborious. It’s not awful, but it’s a hell of a lot easier to compose the text on your phone and then let the Explorer Plus fire it off into the heavens. The app goes into a fair amount of detail on your activities, too, showing things like distance, maximum speed, average moving speed.

As mentioned, though, it isn’t perfect. The inReach Explorer Plus is big and bulbous, coming in at 6.5 x 2.7 x 1.5 inches and weighing about half a pound, so ultralight hikers who really count every ounce will probably think twice. The screen scratches easier than I would like, too. The biggest pain is loading routes and waypoints. It would be great if you could simply download a .GPX file from a hiking site and send it to the device through the app on your phone. Unfortunately, the way you do it is extremely unintuitive. (I could tell you how to do it, but it would make this section several paragraphs longer than it needs to be. You need to read three separate support documents to decipher it.)

Those flaws aside, the device is reliable, accurate, and intuitive to use. Unfortunately, it’s also the most expensive of the units we tested. The device itself costs almost as much as many smartphones, and that doesn’t include the service plan. If you’re going to be doing a lot of trips throughout the year, you can get an annual contract plan starting at $12 / month for 10 texts per month, and prices go upward from there for more data. If you’re just going to be doing trips here and there or in certain seasons, then you can go with a Freedom Plan, which is month to month, starting at $15 and ranging up to $100. The plan prices are about on par with the competitors, and while the device is more expensive, we think the standalone capabilities, built-in TOPO maps, and the intuitiveness make it worth it.

Our review of Garmin inReach Explorer+ 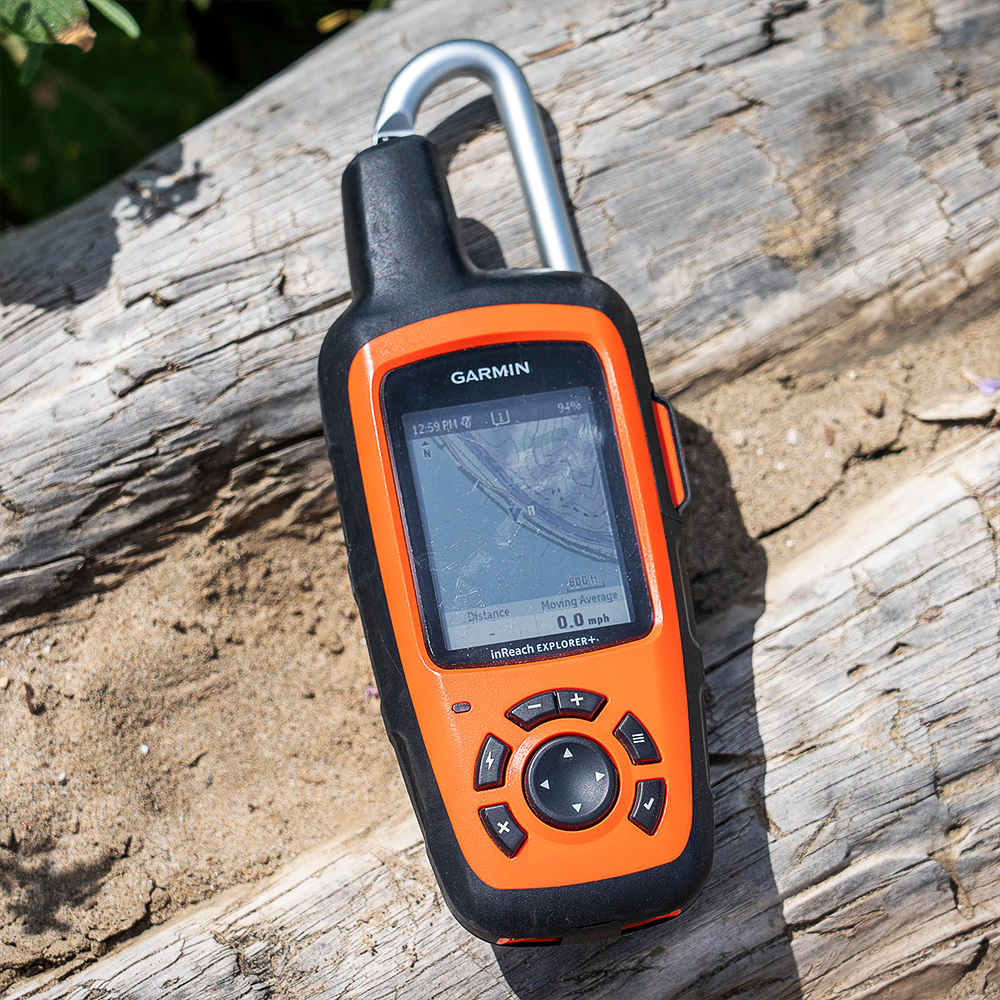 While the inReach Explorer Plus includes just about everything you could want, it is rather large. For people such as trail runners, ultralight hikers, snowboarders, and others who generally want to cut bulk and weight, the inReach Mini is a very good option. It’s the little sibling of our top pick, and it comes in at 4 x 2 x 1 inches and just 3.5 ounces, but it retains a lot of the same functionality. It still has two-way messaging, though typing it out is even more of a pain than on the Explorer Plus, so you may opt for a preset message when you can. That said, you can pair it with a phone, and texting is back to being easy.

There is a dedicated SOS button, tracking, and weather right on the device. It doesn’t have a color screen or onboard maps, but when you pair it with your phone, you’ve got all of that there. It can also pair with some of Garmin’s watches like the Fenix 5S Plus, which even the Explorer can’t. You only get about half the battery life, if you’re lucky, so it’s probably better for shorter adventures, but it’s so small you can just keep in a pants pocket, just in case. The device is about a hundred bucks less than the Explorer Plus, and it has all of the same options for service plans. The Explorer Plus is easily the better overall device, but if size and weight are at a premium, the inReach Mini is your best bet.

Our review of Garmin InReach Mini 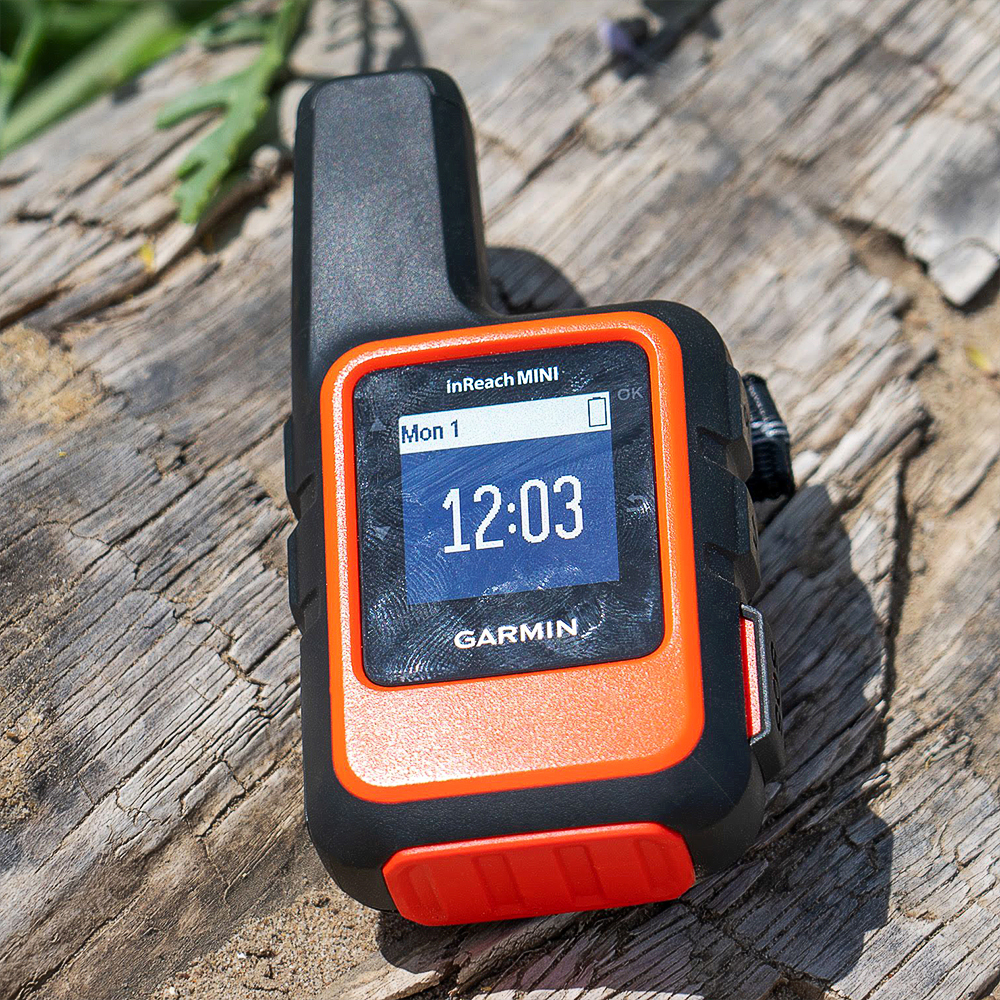 The rest of the pack’s options weren’t quite as robust as those from Garmin, though some came closer than others. The Bivystick sets itself apart by having a well-designed app that already knows thousands of routes (for hiking, biking, canoeing, skiing, etc.), though you’ll have to load them in while you’re still in cell service. It also acts as a USB backup battery, which is good because you really can’t do anything without a paired phone. Unfortunately, it’s on the bulky side, and it doesn’t have a dedicated SOS button like the others.

Somewear has a cool teardrop design and a very clean app, but unfortunately, it just isn’t as fully featured as the others. There is currently no way to load a route or waypoints; you can only track where you’ve been. If you want to share your location or have people track you, it requires them to sign up for a Somewear account, which is pretty annoying. Even simple texts get cluttered with a plea for them to sign up for an account. I had high hopes for the Spot X, which has a BlackBerry-style keyboard, but unfortunately, the keys are flat and stiff, and it won’t pair with a phone so you can’t really use it for mapping. Its UI is extremely unintuitive, which is the last thing you want to be struggling with in the woods. It’s too bad, too, as the device and service are the cheapest of the lot.

Correction, Monday April 15th, 6:45PM ET: An earlier version of this article said the GPS satellites were used to transmit messages. It is in fact another set of satellites that handles message and data transmission. We regret the error.

Our review of Bivystick Satellite Communicator 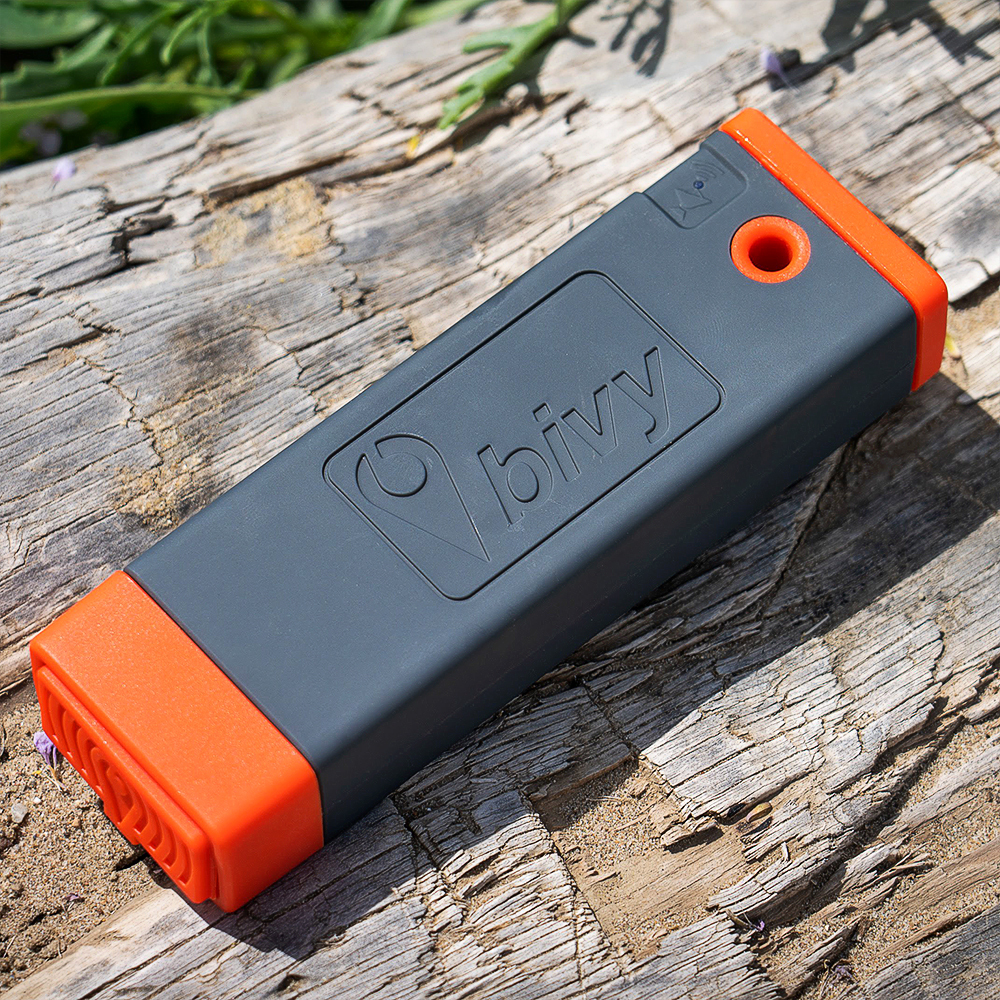 Our review of Somewear Global Hotspot 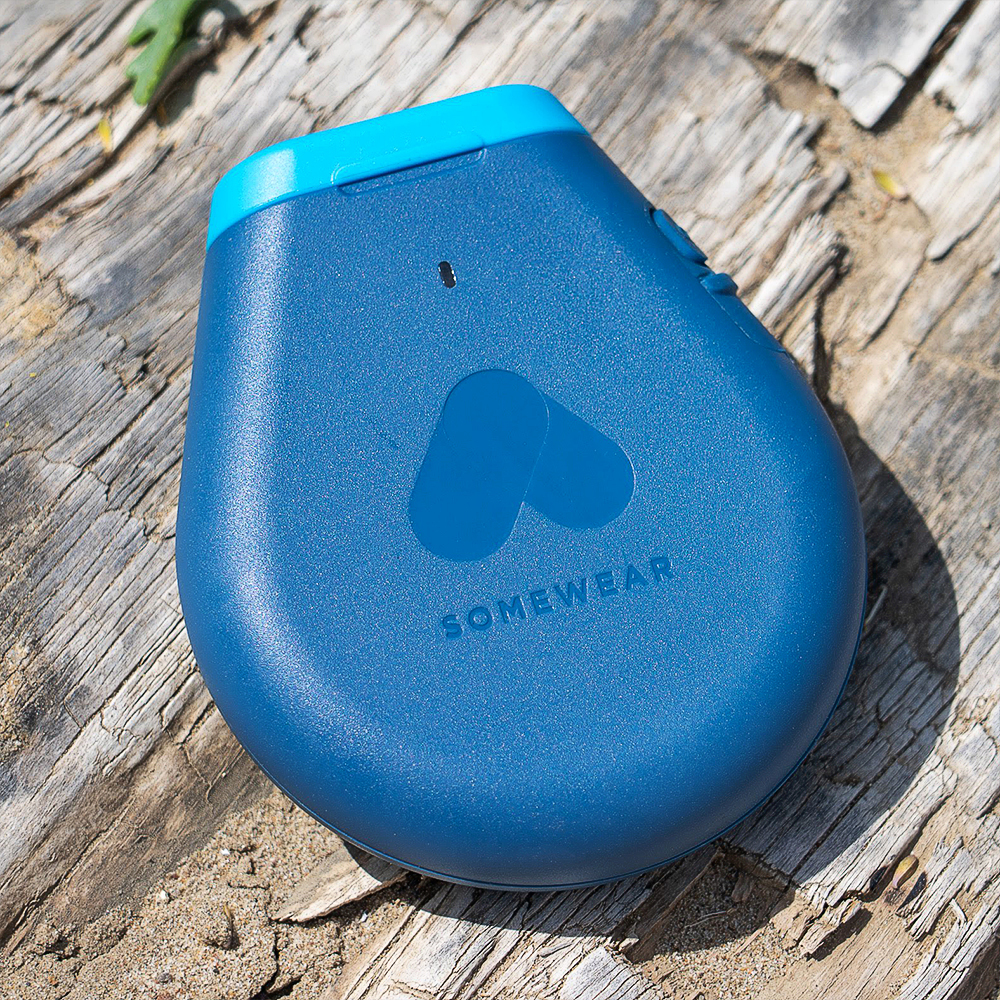 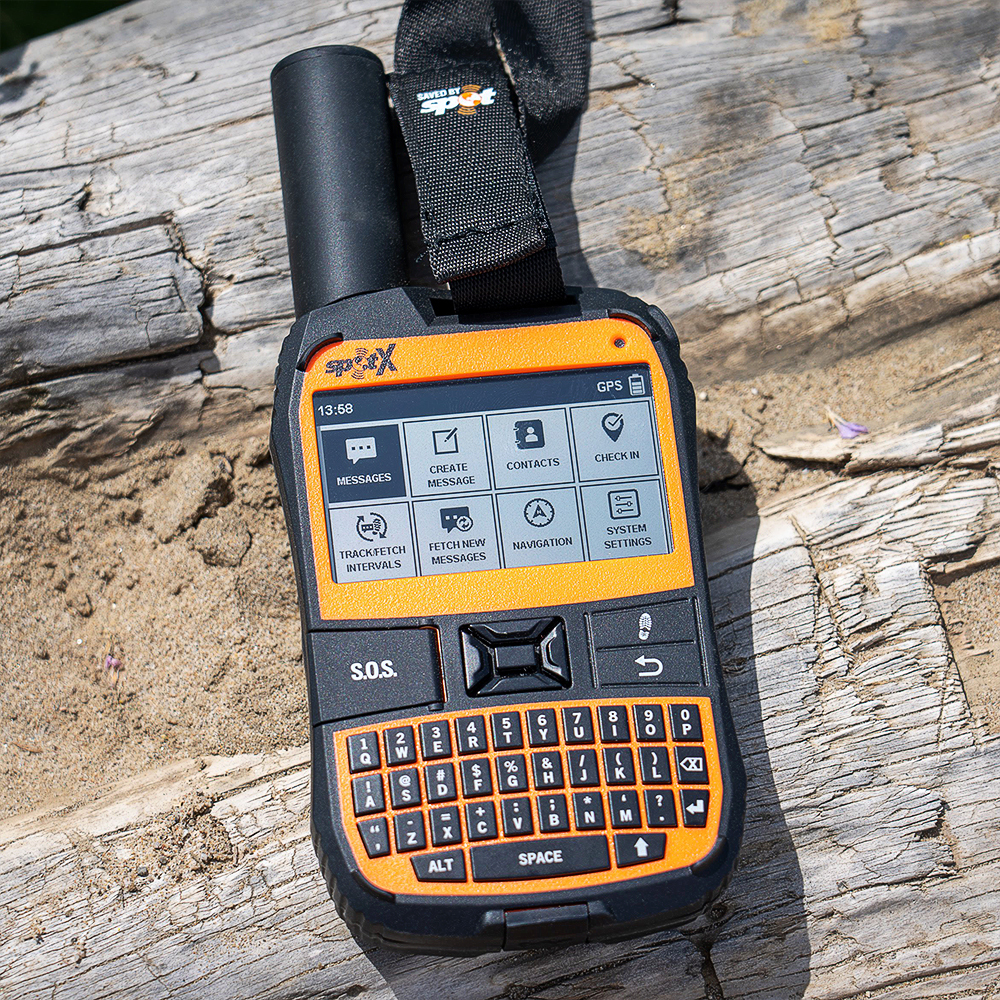