The design is still the same, but the performance jump is real

Share All sharing options for: Apple’s latest iMacs are fast and familiar

There isn’t much I can tell you about the new iMacs that you likely don’t already know. Apple has used the same design for both the 21.5-inch and 27-inch versions of the iMac since 2012, which is basically an eternity in the tech world.

The latest update, released this spring with new processors and graphics cards and a starting price of $1,299 for the 21.5-inch and $1,799 for the 27-inch, doesn’t do anything to change the traditional formula. The iMac is still a sleek, all-in-one computer with all of the computing components housed in a surprisingly thin case behind the display, which comes in either 21.5-inch or 27-inch sizes. While it is still an exceptionally nice computer, it feels far less remarkable than the new iPhones and iPads that Apple routinely cranks out.

But that isn’t to say this year’s update isn’t good. In fact, the new processors and graphics cards that are available in the latest iMacs are considerably more capable than what was available before. You are able to spec out these iMacs with the latest generation chips from Intel and graphics cards from AMD. The results from those new parts are so impressive that if you’re the type of person who has had their eye on the iMac Pro, you might consider the standard iMac instead and save yourself a couple thousand dollars.

Even more impressive than the raw performance is how Apple has managed to improve the noise levels and cooling efficiency, even though these computers use the same fans and designs as the older models. While it certainly is possible to get those fans to spin up under load, the latest iMacs remain surprisingly quiet the vast majority of the time. Since one of the biggest quality-of-life differences between the iMac Pro and the more pedestrian models is how quiet the Pro model is under load, the new iMacs’ reluctance to spin up their fans to obnoxious volumes is greatly appreciated. They still manage to keep the new processors cool enough to maintain performance and avoid excessive thermal throttling. 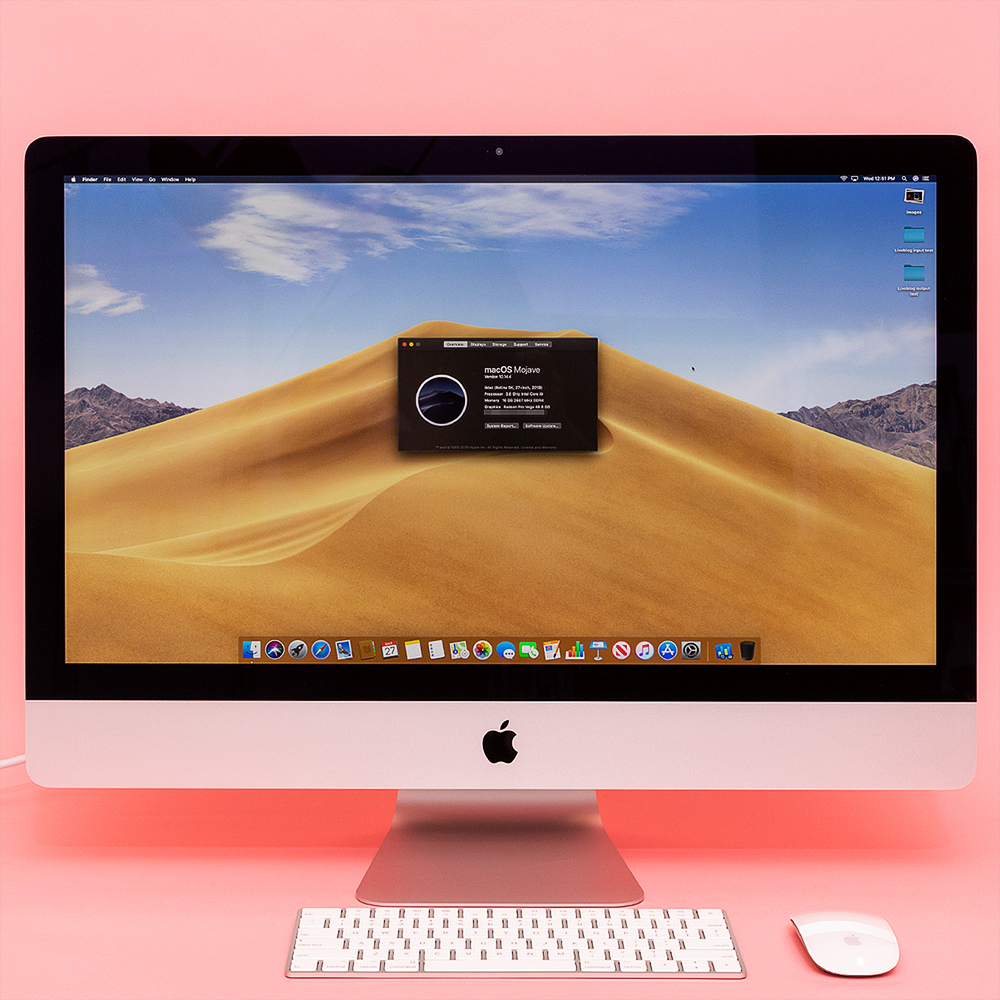 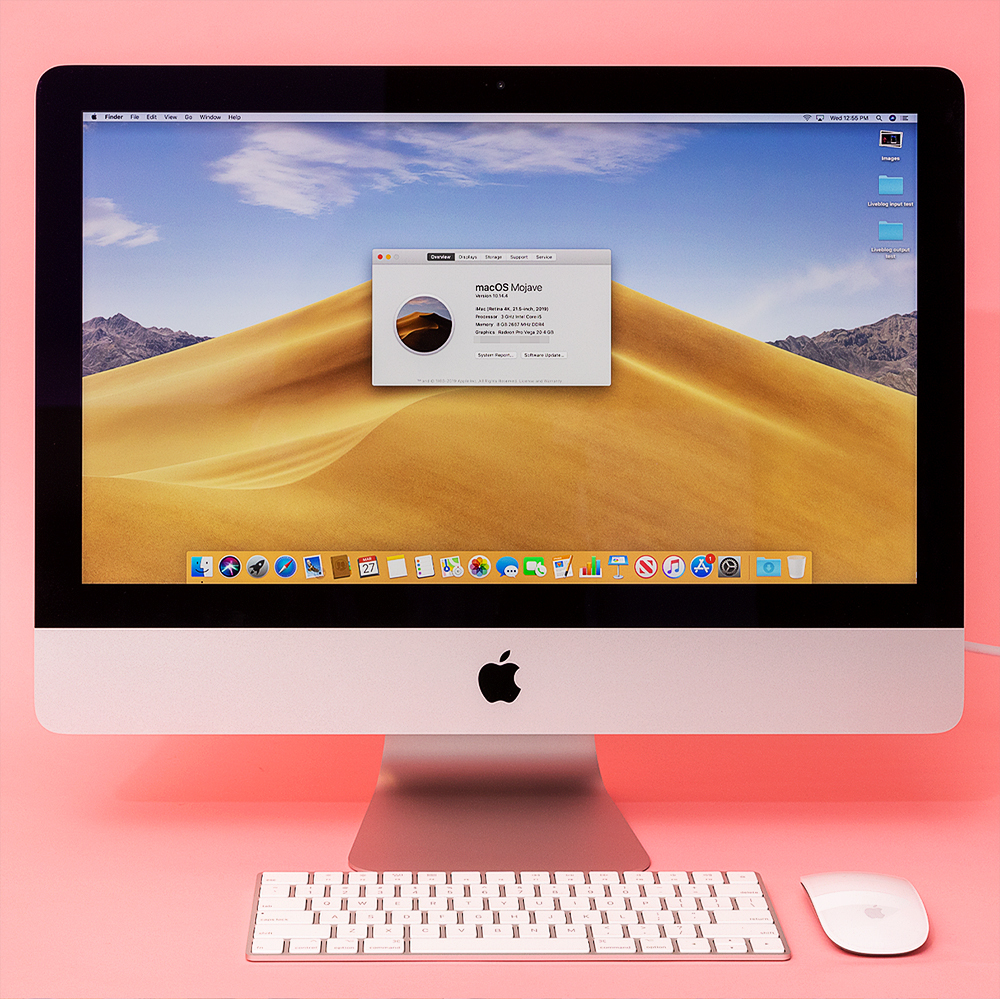 Both iMacs share many of the same hardware and design features, just as they have in the past. There’s either a gorgeous 27-inch 5K screen that cranks up to 500 nits of brightness or a 21.5-inch 1080p or 4K display, four USB-A ports, two Thunderbolt 3 Type-C ports, an SD card slot, a 3.5mm headphone jack, and a Gigabit Ethernet jack. Compared to the iMac Pro, the standard iMac has two fewer Thunderbolt 3 ports, a slower SD card reader, and a slower Ethernet jack.

All of those ports remain on the back of the computer, which makes them hard to access, and that gorgeous screen is framed by a comically large bezel that looks positively silly in 2019. The iMac’s stand also remains frustratingly limited: you can tilt the screen forward or back, but you can’t raise or lower it.

Inside is where Apple has made all of the changes this year, bringing new six- and eight-core processor options and newer graphics card options from AMD. (You still aren’t able to opt for Nvidia’s popular graphics cards, however.) The star of the show is the eight-core Core i9 chip that’s an option in the 27-inch iMac. It’s powerful enough to keep up with the entry-level iMac Pro for single-core performance, but it’s available in a machine that’s $2,300 cheaper. Apple claims performance increases of up to 2.4 times over the 2017 model, and based on my time with the machine, I believe it.

Additionally, the 27-inch iMac can be equipped with up to a Radeon Pro Vega 48, which is a notch below the Vega 56 that comes in the iMac Pro. While it’s not quite as powerful as the Pro’s GPU, the Vega 48 is a considerable step up from the graphics cards that are available before, and it helps improve video editing and photo processing times.

The 21.5-inch iMac’s upgrades are more modest, topping out at a six-core Core i7 processor and Radeon Pro Vega 20 GPU. The smaller iMac also has virtually no upgradability. Like Apple’s laptops, it’s not possible to upgrade the RAM after the fact, so you’re stuck with the amount that is in the machine at purchase. Per usual, Apple’s cost for getting more than the base 8GB of RAM is expensive: $200 for 16GB and a heart-stopping $600 for 32GB. Similarly, the iMac’s storage drives are not upgradeable after the fact, and the base option is a 1TB hard drive that spins at a paltry 5400 RPM. You can choose to swap that for a 1TB Fusion Drive or up to 1TB of proper SSD storage, but in addition to the cost for RAM and processor upgrades, the 21.5-inch iMac has a really poor value proposition.

The larger model does let you upgrade the RAM afterward, so you can buy it with 8GB from the factory and easily swap in up to 128GB if you desire without having to pay Apple’s high fees for it. The storage options are similarly limited as the small iMac, but the 27-inch model forgoes the 5400 RPM hard drive entirely and starts with a slightly more-appropriate-for-2019 1TB Fusion drive.

Like the iMac’s physical design, which combines a state-of-the-art display with a tired chassis, all of these spec configurations and options are an interesting mix of old and new. The processors and graphics cards are cutting edge, while the RAM and storage options are decidedly out of date. It’s a weird dichotomy for Apple’s mainstream consumer computer to have, though that perhaps speaks to how much more important the company’s other products are to its bottom line at this point.

As is the case with almost any modern computer, both versions of the latest iMac can handle productivity work with ease, and they have no trouble managing multiple apps and windows and lots of browser tabs. To really appreciate the upgrades in this year’s computers, you’ll have to do more intensive work, such as processing photos, editing videos, or compiling code. No matter which configuration you buy, the iMac isn’t a great gaming option, even if you install Windows 10 on it, but if you’re not concerned with having the absolute best gaming performance, you can run games at lower settings and resolutions on them. But if you really care about gaming performance, an iMac is not where you should be looking.

Though this year’s updates to the iMac line bring a considerable performance bump over the prior models, it still feels like Apple is dragging out the timeline on the iMac, and it’s long overdue for a more comprehensive refresh. The limitations and frustrations with the iMac are nothing new, and they have been around since Apple introduced this design seven years ago. I find it hard to recommend the 21.5-inch iMac to anyone at this point. The screen is far too small for the price Apple is asking, and you’re better off buying a Mac mini and attaching a separate 4K display to it.

But the 27-inch iMac does still have appeal, especially for those content creators that need more than the typical processing power, but can’t justify the steep cost of the iMac Pro.