The best alternative to the DualShock 4

Share All sharing options for: Astro C40 TR review: a PS4 pro controller to rival the Xbox One Elite

The perfect PlayStation 4 “pro” controller is a bit of a white whale for the consumer electronics industry. Once Sony seemingly resigned itself to sticking with its tried-and-true DualShock design, leaving third-party companies to come up with better options, a number of big brands have tried to crack it with the same success that Microsoft enjoys with its stellar Xbox One Elite. But none have succeeded. In their wake is a graveyard of flawed or just outright poorly made peripherals with three-digit price tags and lukewarm to negative reviews.

Astro’s C40 TR is different. The company, now a Logitech brand that built its reputation early on making high-quality gaming headsets, set out to create a device that would not only satisfy the demands of competitive console players, but also put it in a package that was built to last and not be susceptible to the litany of issues that have plagued other premium PS4 controllers. Plus, it doubles as a PC gamepad, making it a strong Xbox One Elite competitor for Windows players.

I can say with confidence that the C40 solves nearly every complaint I have with competing devices from Scuf, Razer, and others that have tried their hand at the high-end, “elite” gamepad market. Scuf, which is pretty much the Kleenex of the market, makes solid standard pro controllers under its Impact and Pro lines, but its attempt at a C40-style device called the Scuf Vantage was plagued with early durability and wireless problems that it’s been ironing out since its launch last fall.

In contrast, the C40 largely succeeds, with a few caveats and concessions that undeniably make its $200 price tag tough to swallow.

Our review of Astro C40 TR 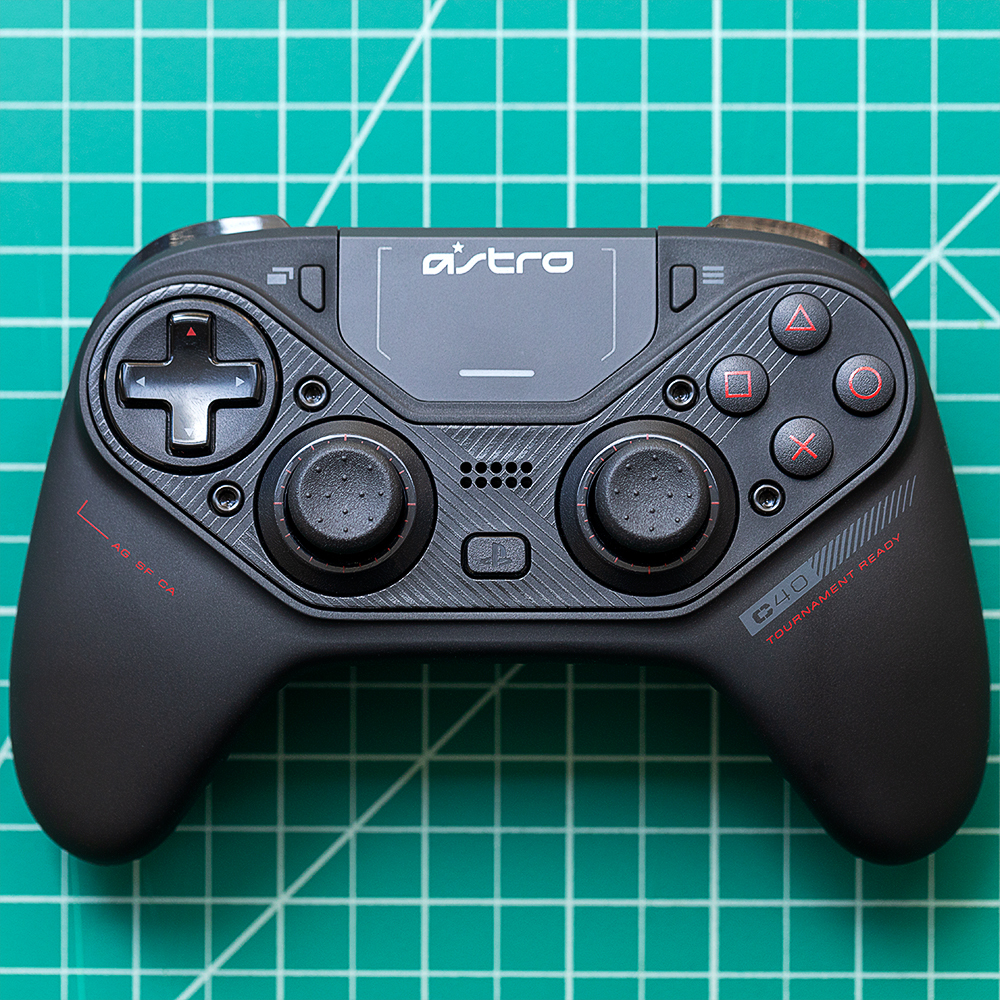 The idea behind a pro gamepad is pretty simple. The stock controllers that come with your home console are typically designed for mainstream consumers, meaning they’re good enough and last just long enough to satisfy most players. If you need to replace them, they cost anywhere from $40 to $60, and the typical lifespan is around one to two years, or longer if you don’t care about losing the rubber on your thumbsticks. (More intensive players might burn through a DualShock 4 in six months or less.)

But just holding the Astro C40 TR makes a strong case for why these pricey alternatives exist in the first place. For one, the build quality is incredible. The controller has a serious heft to it that, while making the controller a little more tiresome to hold for long sessions, gives it a premium feel similar to that of the Xbox One Elite. The ergonomics were well thought out, and the contours of the grips and the matte black finish on top make playing with it a much superior experience over the standard DualShock.

Where the real benefits of this device lie are in the paddles and the modular thumbstick layout. The paddles are not floating pieces of plastic, as they are on Scuf controllers. Instead, they’re four-sided buttons that stretch from the back of the controller to the underside of the left and right grips. That means they can be pressed from any portion with your middle fingers to activate the remapped commands you’ve programmed on them. Because they’re buttons connected to the controller itself, they won’t snap off if pressed too hard, as my most-used Scuf Vantage paddle did three times in less than six months of use.

The modular thumbstick layout is the standout feature of the C40. Knowing that most controllers start to degrade primarily in the thumbstick department, with rubber flaking off and more serious issues related to drift and dead zones, Astro decided to make custom modules that can be easily swapped around and replaced if necessary.

To change the layout, there are four screw locks on the front of the device that you need to loosen with an included tool. (The screws are fixed into place, so there’s no chance you’ll misplace them). After that, you can swap everything around, including turning the C40 from a DualShock 4 layout to an asymmetrical Xbox One layout by placing the left thumbstick where the D-pad is by default. Astro says it will sell replacement thumbstick modules for $20 apiece.

As for remapping, the C40 has an intuitive and responsive remapping system rivaled only by the Scuf Vantage. In the C40, you just hold down a button on the back of the controller, select the rear side button you want to program, and then the button you’d like mapped. It takes less than 10 seconds. The C40 has the added benefit of letting you remap every other button on the controller, not just the additional ones on the backside of the device. For more customization, there’s robust desktop software for Mac and PC that lets you remap instantly and create additional profiles you can swap into the controller’s two onboard profile slots. The software also lets you customize settings like thumbstick and trigger stop sensitivity with a high level of granularity.

Another huge plus with this controller is that it ships with a dedicated USB wireless transmitter. Previous premium PS4 gamepads, like the Vantage and Razer’s Raiju, rely on standard, dongle-less Bluetooth connections to the PS4, making the connection vulnerable to interference and other issues that made playing wirelessly almost impossible for shooters and other games requiring low input lag. For instance, my Vantage unit was practically unusable in wireless mode. The C40 solves that by using a USB thumbstick you keep plugged into the PS4 itself. It’s not a new innovation by any means, but it’s a welcome addition that most headset and wireless mouse makers have come around to as a way to avoid lag. Astro says the device gets 12 hours on a single charge, and I’ve found that claim holds up.

The C40 is not without its issues, however. I used the Scuf Vantage for quite a while last year, and while I personally don’t think most shooter or competitive gameplay styles require you to have four back paddles to play at a high level (with maybe the exception of Fortnite), I can certainly sympathize with people who’ve become accustomed to playing with that many additional inputs. A lot of the top PS4 pro controller makers now offer that option, including Scuf and lesser-known but highly regarded brands like AimControllers, Battle Beaver Customs, and Evil Controllers.

What I do miss about the Scuf Vantage are the “sax” buttons, those two additional inputs resting on the upper sides of the controller that you could activate by just squeezing your pointer fingers. So while I may not have used all four back paddles on the Vantage, I did appreciate the ability to have four additional inputs, and it’s something the Astro C40 TR lacks. If you’re a player who’s spent months or even years using a Scuf Impact or other four-paddle controllers, you’re going to have a hard time adjusting and that might be a deal-breaker.

The C4 TR has its issues, but they’re not deal-breakers for me

There are some other, mostly annoying issues that are worth mentioning. The C40 relies on Micro USB when Astro could very well have switched to a USB-C connector instead. Perhaps there’s some reason behind earning official PlayStation licensing that required the controller be compatible with existing cables and DualShock 4 accessories, but regardless, that means you’re stuck with Micro USB for charging and wired connections.

On top of that, Astro built a special cable that plugs into a unique port hole on the top of the device that you won’t find on any other PS4 controllers. That was to let you charge the controller while also preventing damage to the port, which Astro says is especially susceptible to harm. That’s a nice touch, but it means some existing Micro USB cables might not fit into the port — I tried four of my own, and two worked while the other two had trouble fitting. In any event, you may need to buy a replacement cable from Astro if you lose the one that ships with the C40 and want one that’s long enough to stay keep the device tethered to the console.

One other peculiar hurdle with this controller is that, despite being an official PlayStation-licensed device, the C40 TR can’t turn the console on. Astro is not alone here; this is true of every other PS4 pro controller on the market, with the exception of those that are rebuilt using dismantled DualShock 4 units, like the Scuf Impact and similar models.

Apparently, Sony doesn’t feel like providing the necessary components to make its official third-party controllers work directly with the PS4, so you’re stuck turning the console on using either the button on the front of the console or with your old DualShock 4. From there, you can easily sync the C40 with the press of a button. It’s a hassle, sure, but it’s not a problem Sony seems intent on helping its partners solve.

Those issues aside, the Astro C40 TR is the first PS4 pro controller in this price range that I feel comfortable recommending. It’s the most durable and premium gamepad I’ve used outside the Xbox One Elite, and Astro’s modular system leaves me confident that I can replace its most vulnerable parts if or when they do eventually fail.

If the $200 price tag is too much for you — just $100 more gets you a full-fledged PS4 Slim console — that’s an understandable position, especially considering the next-generation PlayStation is coming out likely two years from now. But if you’re even remotely considering the C40, know that it’s the best PS4 controller you can get right now.

Correction: The Astro C40 TR does not use a proprietary Micro USB, as a previous version of this article noted. It does have a specially designed cable and port shape that makes using existing Micro USB cables somewhat difficult if the connector is overly large or shaped uniquely. This article has been updated to reflect that clarification.