The dirty little secret of my favorite categories of consumer goods — headphones, backpacks, and watches, primarily — is that they all have offensively fat profit margins. Their prices used to be fairer when manufacturers had to pay retailers for physical shelf space, but in the age of online shopping, every purchase we make is, to some extent, exploitative. Brainwavz is one company that’s trying to exploit the consumer less by undercutting the bigger audio brands on price while maintaining a high level of sonic quality. The Brainwavz B400 are still one of my favorite pairs of in-ear headphones, performing far beyond their $199 asking price. The latest from Brainwavz is an even cheaper option: the $150 HM100.

The Brainwavz HM100 check off a lot of items on the typical audiophile wishlist: their ear cups are made out of real wood, they come with a hard carrying case, a choice of wires, plus a two-year warranty, and their design conceit is that they offer studio-quality sound.

There’s no denying that you get a lot for your money with these headphones, but they fall short on quality and refinement, which undermines their claim to being a more affordable version of the pricier stuff. They’re cheap headphones that feel like cheap headphones.

Our review of Brainwavz HM100 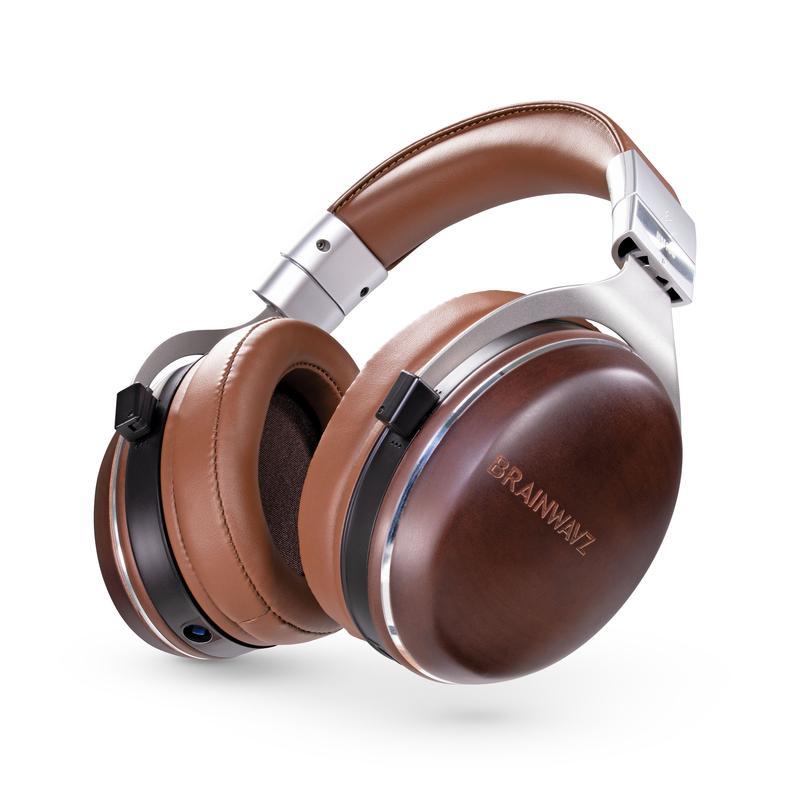 Everything about the HM100 design is intended to evoke the look and feel of high-end headphones. Start with the two-tone coffee color scheme, which is a little reminiscent of the Focal Stellia, except Focal uses real leather whereas Brainwavz puts unnecessary stitching on its leather-like headband material. Then there’s the shape of the metal yoke connecting the headband to the headphones, seemingly ripped straight off Beyerdynamic’s production line. Japanese headphone manufacturers like to put numbered lines on the extendable part of the headband, so you can always know your favored setting, and Brainwavz re-creates that styling but not the functionality. There’s no friction to the HM100 expansion mechanism, so they never stay fixed at your desired size setting.

The design is derivative and dishonest about its materials

To put these headphones on, you basically disregard the adjustment options and just expand their size by pulling them onto your head. It’s like using a pair of cans with an elastic strap at the top, except the experience is not as pleasant. Similar things can be said of the extremely deep ear pads and thickly padded headband: they’re like those of luxuriously comfy headphones such as the AudioQuest NightHawk, but not as nice. With the inclusion of plastic bits that simulate a metal look, but creak, the HM100s complete the full set of faux ornamentation sins. In spite of their considerable bulk, these headphones feel decidedly flimsy and unconvincing.

The one honest thing about the materials of the HM100 is the genuine wood used on the ear cups’ exterior. It’s a neat touch. If I close my eyes (and my ears to the creaking), I’d say these headphones provide a nice and comfortable fit for long listening sessions. You can also take them on the move because they don’t have high power requirements and Brainwavz includes a short cable for just that purpose. It’s a good cable that doesn’t tangle easily, and the passive sound isolation of the HM100s means they do a fine job of suppressing exterior noise and letting you enjoy your music.

The only problem with the idea of these as portable headphones? They’re comically large and indiscreet, lending the wearer an old-school robot look. I have a large head, and they still look enormous on me; more petite humans might get entirely swallowed up by the HM100s. And then there’s also the fact that they don’t collapse down. Should you wish to transport them with their provided case, it’d occupy the vast majority of any bag you choose to use.

The sound of the HM100s partially redeems their physical shortcomings. It is crisp and faithful to the music, offering a broad soundstage that’s atypical of closed-back headphones of this kind. I guess that’s the benefit of having those cavernously deep ear cups. Brainwavz gets reasonably close to its marketing promise of studio-quality performance, as the HM100s retrieve a lot of detail. But their tuning is not one that I’d encourage anyone working on a professional music production to rely on.

The soundstage is wide, the detail is there, but the tonal balance leaves you feeling cold

The treble response of the HM100s is a sliver too strong. It’s only a matter of a few decibels, but it’s the difference between a well-balanced sound and one that’s too sharp and shrieking. With a small bump in the mid-bass — which typically provides a favorable sweetener to the music — the HM100s tend to recess the mids, deadening some of the most interesting parts of most genres of good music. The ultimate result is a sound that feels competent because of its detail, but it’s neither accurate nor fun enough to recommend.

As much of an advocate as I have been for value-for-money headphones like the Status Audio CB-1, I can’t say that the Brainwavz HM100s offer a good balance of compromises for their attainable price. Unlike the CB-1s, which opt for basic but strong and durable plastic construction, the HM100s try and fail to look and act like a high-end metal-and-leather pair of cans. Brainwavz does a fine job of getting decent performance out of these headphones. However, their final tuning seems uncertain as to whether it’s meant to flatter and excite the casual listener’s ear or do work as an actual studio monitoring headphone.

The Brainwavz HM100s are an example of a product that’s designed to check off too many boxes and, as a result, doesn’t adequately fill any of them.