By Dan Seifert@dcseifert Apr 26, 2019, 8:30am EDT
Photography by Amelia Holowaty Krales / The Verge

For years, you’ve been torn between gaming in your living room and gaming at your desk. The living room has been the domain of consoles, big screens, and in-person multiplayer sessions, while your desk is the world of PC gaming, with high-end graphics and pinpoint peripheral precision.

While it’s certainly been possible to plug a gaming PC into your TV and use a wireless mouse and keyboard to bring that experience into the living room, gaming this way has never been as good as at your desk, thanks to your TV simply not being a gaming monitor. Even the best TVs on the market can’t match the high refresh rates and extremely low response times of competent gaming monitors.

HP’s Omen X Emperium 65 changes that. The first of Nvidia’s Big Format Gaming Displays (BFGD) to hit the market, the $4,999.99 Omen X is a 65-inch, 4K HDR screen with a 144Hz refresh rate and support for Nvidia’s G-Sync technology. It has a response time that’s much closer to a dedicated gaming monitor than a typical TV, and it is meant to be used just like you’d use a gaming monitor: plugged into a high-end gaming PC.

Of course, since it is a giant screen, it can also behave as a TV, and it has an Nvidia Shield Android TV built into it as well. It also comes with a soundbar that puts out a surprising amount of volume and runs laps around the speakers that are built into most big-screen TVs.

But, perhaps unsurprisingly, the Omen X 65 is far from perfect, and it requires more than a few compromises to bring PC gaming to your living room. 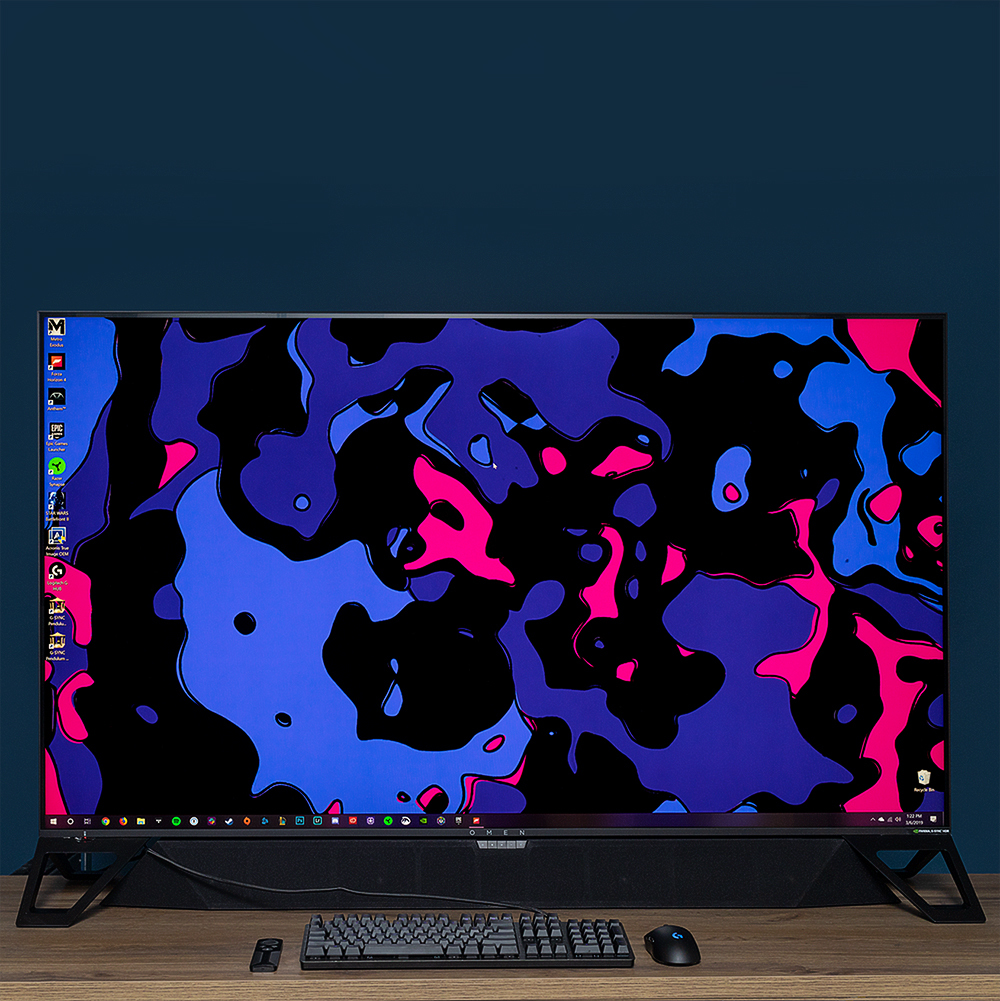 To get right to the point, gaming on the Omen X 65 is nothing short of awesome, especially for fast-paced games like first-person shooters. Playing PC games on a screen this large is a completely different experience than sitting at a desk, even if you have a large monitor in front of you there. The Omen’s bright, color-rich screen and fast refresh rate makes everything smooth and immersive, and it’s quite impressive.

You’ll need a lot of horsepower to really appreciate it, though: just like we’ve learned with high-refresh-rate 4K monitors, the Omen X 65 demands a high-end PC with a modern graphics card to be able to game at 4K resolution at any respectable frame rate. HP recommends a GTX 1080 Ti graphics card at the minimum; I used a machine with an RTX 2080 Ti connected to the Omen X 65 via DisplayPort (necessary for 144Hz at 4K and G-Sync support) for testing. But even with Nvidia’s most powerful consumer graphics card at your disposal, most modern AAA games will not be able to run at the full 144 fps in 4K resolution that this display supports. Fortunately, G-Sync helps ensure there’s no tearing at lower frame rates. You’re definitely buying for the future here, and you’ll need to upgrade your PC at some point down the road to make the most of this screen.

Another thing you’ll definitely want is a good wireless mouse and keyboard, and maybe a lapboard to put them on that will let you sit at least 10 feet away from the Omen X 65. (I like Logitech’s Lightspeed peripherals.) No matter the settings, it’s such a large, bright display that viewing it from any closer feels like I’m staring into the sun, and gets tiring quickly.

If you do have the right set up, gaming on the Omen X 65 is better than with either a 24 or 27-inch monitor at your desk or a high-end TV. It really combines the best of both setups: you get a giant screen to pull you into the game you’re playing, while still having the fast response rate and smooth visuals you’d expect on a desktop monitor. If you’ve ever imagined what it’d be like to have your PC gaming experience on a 65-inch TV, this is exactly that.

Unfortunately, while the PC gaming experience on the Omen X 65 is wildly impressive, everything else is disappointing.

Let’s start with the design, which is the typical mix of sharp edges and RGB lighting accents of most gaming peripherals. You can adjust the color of the built-in bias light (the LED that’s on the back of the display and shines against your wall), but you can’t change the thick frame or substantial metal legs that prop this thing up. There are 100mm VESA mounting points, so you could forgo those legs and mount the Omen on the wall, provided you have the space for it. One particularly nice highlight are the input ports, which illuminate automatically when you go plug something in to help guide you.

HP is careful not to call the Omen X 65 a TV, simply because it lacks an over-the-air tuner. But unless you have a dedicated gaming den for this set up (which if you’re ready to drop five grand on this thing, you might), you probably expect the Omen X 65 to pull double duty as a TV when you’re not playing games. To that end, it comes with Nvidia’s Shield TV built into it, a fully capable Android TV set-top box integrated right into the display.

Here is where things really start to fall apart. The Omen X 65’s local dimming feature, which is enabled by default and is designed to keep brighter parts of the screen bright while dimming certain areas based on the content displayed, causes lots of patchy, uneven backlighting that’s positively gross to look at when navigating the Android TV interface. It’s not noticeable when playing games or watching any fast-paced content, and the blotchiness goes away entirely when the local dimming is disabled, but it’s a bummer that you have to compromise on the picture quality to fix the problem.

Since the Omen has an Nvidia Shield TV built into it, it comes with the same, basic remote that ships with the Shield TV set-top box. Simply put, it’s not a great remote, forcing you to use an annoying touch strip to adjust the volume and only offering a handful of buttons to control the rest of the TV. The remote is so simplistic (because it was designed for the Shield TV set-top box and not as a full TV remote) that doing things like accessing the on-screen menus to adjust picture or even just turning off the display require long-pressing various buttons and navigating through labyrinthine menus. HP does say that you can control the screen with a third-party remote, but the only platform it supports is Logitech Harmony. I don’t think you should have to spend another hundred dollars to easily turn your $5,000 TV off from the couch.

The Omen X 65’s picture quality can be described as good, but it’s not great. The panel gets very bright and has decent viewing angles, but for less than half the price of this screen, you can get an OLED TV from LG with far deeper blacks and much better overall picture quality. In terms of formats, the Omen X 65 supports HDR 10, but not Dolby Vision, for some reason.

One bright spot is the included soundbar, which is designed to fit perfectly between the legs of the Omen. It gets loud and sounds full, with punchy bass, even without the need for a separate subwoofer. It won’t compare well to a dedicated surround system, but it sounds a lot better than the built-in speakers of most big-screen TVs.

Unfortunately, the soundbar is large and heavy, and doesn’t sit flush with the display when it’s mounted on a wall. Frustratingly, the remote that comes with the Omen X 65 doesn’t have the ability to control the soundbar’s volume — it can only control the display’s output via the touch strip. HP says it ships the soundbar at full volume and that users shouldn’t need to adjust it directly, but there are buttons on the soundbar itself to do so.

It’s a big gaming monitor, not a fast, responsive TV

Overall, it’s clear that while HP and Nvidia certainly know their way around a PC monitor, they don’t seem to know how to build a competent TV, or haven’t spent the time necessary to learn how. As a result, the Omen X 65 isn’t any more at home in your living room than any other gaming monitor you can buy; it’s just bigger. Everything from the on-screen display to adjust the settings, to the lack of a decent remote and poor local dimming performance highlights that this is a one-trick pony, instead of a multi-use monster.

It’s not clear what other BFGD screens will arrive in the near future, or if they will be any better than the Omen X 65. But it’s safe to say that if you’re willing to spend this much on a screen and rightfully hope to use it for more than just playing PC games, the Omen X 65 will likely leave you disappointed.