Share All sharing options for: Oculus Quest review: a great system with a frustrating compromise

According to Google, the term “VR for the masses” dates back to at least 1994 when it referred to the Nintendo Power Glove and Sega 3D glasses. Several systems have taken the mantle since then, including the groundbreaking Oculus Rift, which set off a wave of VR enthusiasm in 2012. But it’s 2019, and VR’s acquaintance with the masses is still passing at best.

This is necessary context for any review of the Oculus Quest, another headset that’s supposed to give VR mainstream appeal. Oculus’ parent company Facebook is releasing the $399 Quest on May 21st, alongside an updated Oculus Rift model. After spending a week with the device, I’m convinced that the Quest has a lot to offer. In some ways, it might be the best headset on the market. But it’s still hampered with many of the same fundamental shortcomings we’ve seen for years in VR, and its convenient but low-powered design makes it a relatively pricey compromise.

Our review of Oculus Quest 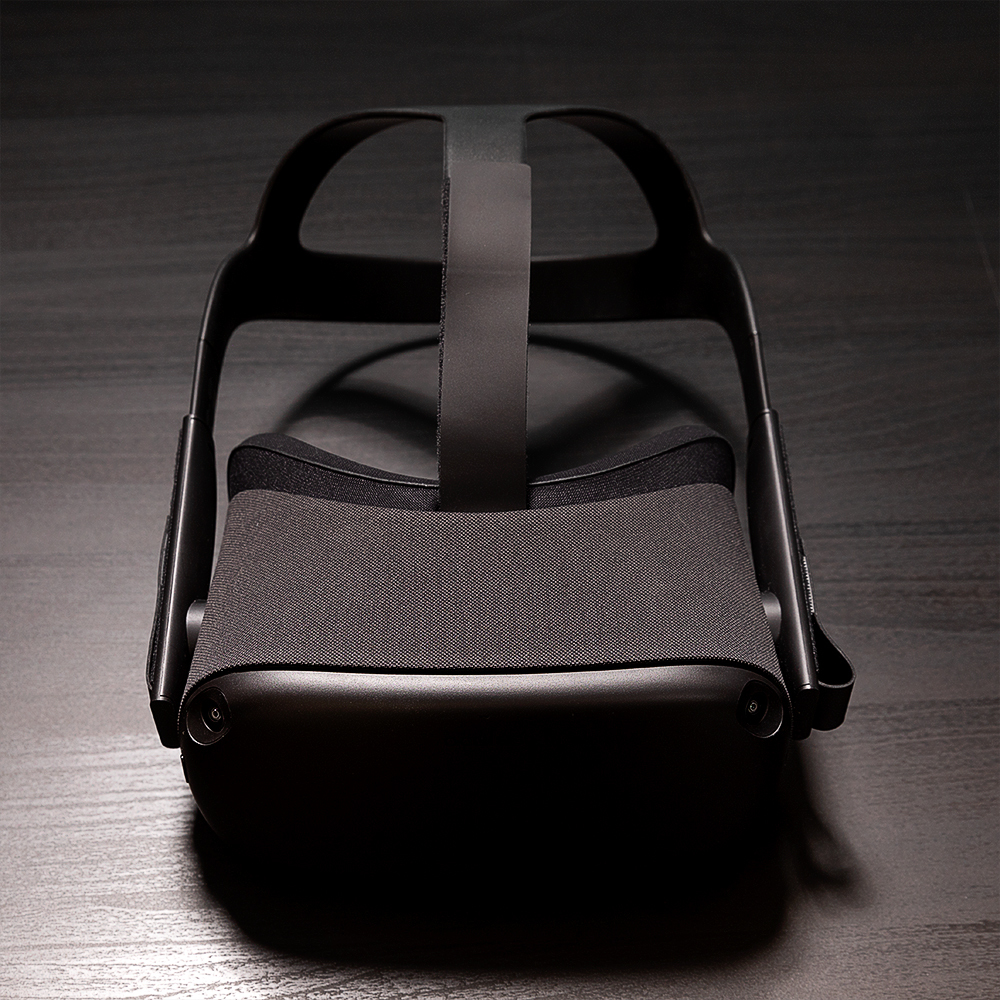 The Quest is Oculus’ fourth consumer VR headset. Like last year’s Oculus Go, it’s got a standalone design, which means it doesn’t connect to a phone or PC. But where the Oculus Go is meant for stationary TV or movie viewing, the Quest is a gaming device. It includes dual hand controllers instead of a single remote, and it’s studded with four wide-angle tracking cameras, which let users walk around a fairly large space. It will also support some of the Rift’s most popular experiences, including the rhythm game Beat Saber, rock-climbing title The Climb, and shooter Robo Recall.

The Oculus Quest maintains the original Rift’s minimalist aesthetic, unlike the new and completely redesigned Rift S. It’s got a body covered in black fabric and a trio of head straps, which work okay with the Quest’s increased weight, although it’s definitely a less comfortable experience. There’s also a slider for adjusting the distance between lenses. (The Rift S has gotten rid of the slider, a move that irked some people, including Oculus founder Palmer Luckey.) It’s even sleeker in some ways since the Rift’s headphones have been replaced by invisible directional speakers, although they leak sound so loudly that you might want to plug in earbuds anyway.

The Quest’s insides are stuffed with electronics, including a Qualcomm Snapdragon 835 mobile chipset from 2017 and 64GB or 128GB of storage. It adds features like a volume rocker, a power button, and a USB-C charging port. There’s a battery that’s supposed to last between two and three hours; I’ve gotten a little over two hours while playing games. The Quest is notably heavier than the Rift, with a thick, convex front panel. It’s also completely wireless, and you don’t need a gaming PC to use it. These are massive improvements for both ease of use and mainstream appeal.

Even after years of using tethered VR, I still occasionally trip over cables or accidentally twist them around my feet. My Oculus Rift is also stuck in one fairly inconvenient location because that’s where my desktop computer lives. The Quest fixes both of these problems effortlessly. I’ve had bad experiences with Quest-style inside-out headset tracking on other headsets, but Oculus’ new “Insight” system genuinely seems to work. The cameras detect edges, so a totally bare room might cause problems, but I’ve used it in dim light — and at a few different locations — with no issues.

These cameras can also pass grainy, monochrome video to your screen. The HTC Vive and other headsets already offer this feature as an added convenience since it lets users see the real world without doffing their headsets. Here, it also makes mapping your play space incredibly easy. While VR calibration usually requires walking around a room to trace its boundaries, the Quest lets you simply put on the headset and paint virtual lines on the floor.

The Quest can theoretically remember up to five spaces and automatically swap between them, so you can move between rooms without repeating the setup. I haven’t gotten this to work consistently, but it’s a minor speed bump because redrawing the lines only takes a few seconds. Oculus has also shown off “arena-scale” VR with the Quest, teasing the possibility of nearly limitless virtual motion. For now, the Quest’s maximum play space is 25 by 25 feet; the system just won’t let you draw a boundary that’s larger.

Oculus is shipping the Quest and Rift S with the same controllers, which are slightly modified versions of its 2016 Oculus Touch design. The controllers’ motion seems as accurate as the headset’s, and I’ve had no trouble stretching my hands to the side or above my head. I lost tracking briefly when I first tried Beat Saber, a super fast game that involves flicking your hands at odd angles. But I played for hours, and it didn’t happen again. I’ve only had recurring issues with boxing game Creed where blocking a punch involves nearly touching my controllers to the headset. (I’ll admit that’s not a very common mechanic.)

I have experienced one odd issue: the Touch controllers froze once when I inadvertently knocked them together and again when I accidentally struck a piece of furniture, and I had to reboot them both times by pulling the AA batteries out. Oculus says it’s aware of the problem and that a software fix should come through by launch.

Meet the new controllers, which are very similar to the old controllers

The new Touch controllers look a little different from the old ones, mostly because Oculus has flipped a tracking strip from below to above your hands where the head-mounted cameras can find it. The basic controls haven’t changed: you’ll still find the same two face buttons, dual triggers, and analog stick on each controller. The analog stick has been shifted upward, and the controller’s face is slightly narrower since Oculus has eliminated a capacitive Touch panel that detects a user’s thumb position. Resting your thumb on its buttons does the same thing, but I occasionally missed the feature in gesture-heavy games like Dance Central where I’d worry about accidentally clicking something while making a virtual fist.

This is an extremely minor gripe from a longtime Rift fan, and the Quest is aimed at newer users who almost certainly won’t notice. Facebook CEO Mark Zuckerberg introduced the Quest as a step toward getting a billion people into virtual reality, and Oculus CTO John Carmack compared it to the Nintendo Switch: a device that’s lower-powered than big consoles like the Sony PlayStation 4, but it has succeeded because it’s convenient and relatively cheap.

The problem is that despite these efforts, I don’t think that the Quest has Switch-style mainstream appeal. It’s about as sophisticated and convenient as I can imagine a $399 VR headset getting in 2019. But VR, in general, is still clunky and socially awkward, and Oculus hasn’t really cracked those problems. While the headset is fairly well-balanced, it’s still heavy, and some sessions have left me with a throbbing forehead. The Quest’s screen is higher resolution than the original Rift’s, at 1600 x 1440 pixels per eye, and it uses improved lenses. But it’s still grainy. Like all headsets, it’s just a weird and conspicuous thing to wear on your face.

VR ostentatiously shuts out everyone around you, including roommates, children, and significant others. This can be appealing if you want some time alone, but if you want to be engaged with these people, it’s a real problem. Oculus is trying to fix this by letting the Quest stream video to a phone, Chromecast, or Nvidia Shield set-top box. To me, though, that almost feels worse. It’s like signaling that I won’t be paying any attention to my friends or husband, but they should still pay attention to me.

Cultural attitudes toward technology change, but they create an extra barrier for the Quest to overcome. I’m not sure the Quest can make the leap. Some VR headsets have been relatively successful — Sony’s PlayStation VR has sold 4.2 million units since November 2016, for example — but the key word is relatively. Nintendo shipped around 32 million Switch consoles, by contrast, in a shorter period of time. Sony also had a huge, established presence in the gaming world already, and it could tie the PSVR to a wildly successful console, which is something Oculus isn’t doing.

Unfortunately, the Quest isn’t simply a better, more convenient Rift. It can play smaller and less graphically intensive Rift games, and it supports some bigger games like The Climb and Robo Recall, although I haven’t gotten to test them. But it’s launching with only around 50 titles, a fraction of the Rift’s catalog. Oculus won’t be porting some of its hottest upcoming Rift titles, including the open-world role-playing game Stormland.

The VR games market is already small, so these gaps make the Quest less attractive. If VR games grow to the size of your typical big-budget console game, it’s not clear the Quest’s mobile hardware will be able to keep up. If you’ve got a spare $400, a tolerance for light physical and social discomfort, and a resistance to FOMO, this compromise might be right for you. Otherwise, you could wait for a price drop or some new technical breakthroughs or opt for a Rift or PlayStation VR, if you’re interested in exclusive games. Oculus says the Quest and Rift S complete its first generation of VR, and we don’t know what a second generation might bring.

As an Oculus Rift owner, I’m deeply tempted by the Quest. My five-year-old gaming PC is showing its age. I play a lot of Beat Saber, and I’d love having a self-contained headset with all of the Rift’s core features and none of its wires. I just wish I didn’t have to pick between a design I love and the games I want to play.

F8 2019: all the announcements from Facebook’s developer conference