There’s a new Oculus Rift on the market, and it doesn’t look much like the Oculus Rift.

The original Oculus Rift was a fascinating product. Announced in 2012, it played a huge role in making virtual reality seem real, instead of just a retro holdover from the ‘90s. Now, around three years after its consumer release, it’s being replaced by the Oculus Rift S: a modest upgrade with a new look, a few new features, and a $50 price bump.

Our review of Oculus Rift S 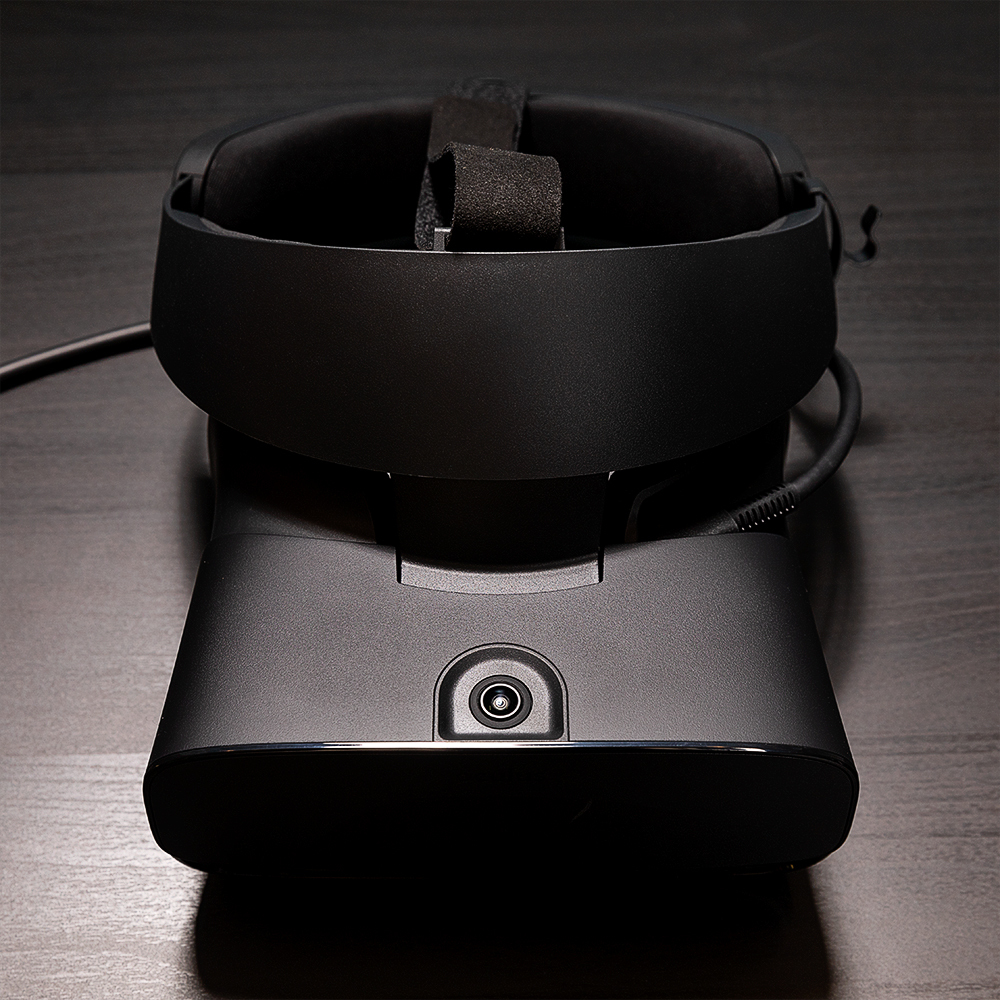 Oculus has described the Rift S as an improvement, but not a true “Rift 2.” It’s coming out on May 21st alongside the Oculus Quest, a more ambitious headset with a standalone design and greater mass-market appeal. The Quest is convenient and self-contained, but it doesn’t play high-end Oculus games, thanks to its relatively low-powered components. The Rift S is still wired to a gaming PC, but it’s considered Oculus’ “gold standard” for VR. If you want the platform’s biggest and best-looking exclusive experiences — like the upcoming open-world game Stormland — it’s still your only option.

The Rift S costs $399 — the same price as the Quest, and slightly more than the old Rift, which sold for $349 after several price drops. Its main addition is the “Insight” system, which uses tracking cameras built straight into the headset, rather than ones that are mounted around a room. Insight was first seen on the Oculus Quest, and the Rift S version is fundamentally similar. The Rift S has five cameras to the Quest’s four, however, and they’re placed differently: instead of a wide-angle camera on each corner, the Rift S has two cameras on the front, one on each side, and one on the top of the headset.

According to Oculus, this should give your hands a little more range in the Rift S compared to the Quest. In practice, I didn’t notice a significant difference — possibly because Quest games are heavily optimized for that platform, and developers can do things like predict your movements even when you’re out of range.

Unlike the totally wireless Quest, you’re still tethered to a computer with the Rift S, so the benefits aren’t quite as dramatic. You’d need a backpack computer to get the “arena-scale” VR that Oculus has shown in some Quest demos, for instance. But it’s still a real improvement over the original Rift. Arranging the first generation’s wired camera stands — and occupying all your computer’s USB ports in the process — was annoying at best. Its default two-camera setup couldn’t track your controllers if you turned around, and a “room-scale” three-camera setup required running wires across your room.

Oculus has ended the tyranny of camera stands

The new Rift’s self-contained setup is far simpler. You plug in one USB cable and one DisplayPort cable, then run the Oculus desktop software, which guides you through setup. To draw boundaries around your play space, you don your headset, pick up one of the two hand controllers, and trace lines on a grainy video feed of the real world — just like the Quest’s system. There’s no fiddling with camera stands or running wires all over the room to power them.

Oculus has slightly redesigned its old Touch controllers, which are shipping with both the Quest and the Rift S. I’ve discussed the controllers more in my Quest review. But in short, they’re not significantly better or worse than the old Touch, which is still one of the best VR controllers created so far.

As I wrote in my Oculus Quest review, I’ve found Insight impressive, and easily a match for the old Rift tracking cameras. It’s a great feature that more than justifies an intermediate Rift.

The rest of the changes, however, are less straightforward upgrades. The old over-the-ear headphones are gone, for instance, and replaced by directional speakers that are designed to direct sound into your ears. But they leak enough sound that I’d consider using my own headphones (or Oculus’ optional earbuds) around other people.

The Rift S has a slightly higher-resolution screen than the original Rift, at 1280 x 1440 pixels per eye instead of 1200 x 1080. But that’s still not as high as the Oculus Quest, and the screen refresh rate has actually been downgraded. Refresh rates help determine image quality and comfort in VR — if they get too low, they can increase motion sickness. Most VR headsets, including the old Rift, have aimed at a minimum of 90Hz. The Rift S only refreshes at a rate of 80Hz.

That’s caused a lot of consternation in the VR space. When I got my Rift review unit, Oculus said that more (but still not many) people could see a screen “flicker” at 80Hz than 90Hz. I didn’t have this problem, but some Rift fans may notice. And the screen doesn’t really feel better than the original Rift, as you’d expect from a headset that’s coming out three years later.

Oculus made these compromises to avoid changing the Rift’s computing requirements. If your gaming PC met the old minimum or recommended Rift specs, it should also work with the Rift S. I tried it with a newer gaming laptop, however, so I haven’t personally pushed that bottom limit. While it’s nice that the Rift S can be used with a five-year-old computer, it’s frustrating that you can’t really take advantage of the power in more modern machines if you have it — most modern graphics cards should be able to push higher refresh rates at the resolutions of the Rift S displays, but you just don’t have the option.

At first glance, it’s surprising that Oculus didn’t slightly increase the recommended specifications, or drop support for its minimum specs, to avoid taking some steps backward with the hardware. The Rift is supposedly meant for people who don’t mind spending extra money on VR — in other words, the people least likely to balk at buying a new graphics card or a more powerful computer. Oculus has competition for these customers: gaming company Valve recently introduced a significantly more expensive headset called the Index, which opens for preorders on May 1st. Oculus is retiring the old Rift, so why make its biggest fans feel like they’re getting a downgrade?

Oculus executive Jason Rubin has said that the Rift S is designed to avoid seriously raising the Rift’s price or adding “some sort of feature that breaks all the old stuff” and splits up Oculus’ ecosystem. But there will still be Rift-exclusive games, and requiring minor specs upgrades shouldn’t break anything. Road to VR’s Ben Lang has a theory that makes sense, though: the Rift S isn’t really meant for hardcore fans, it’s meant for developers.

VR is growing, but PC-based headsets are still a niche product, and even a great Rift upgrade would probably have a small consumer audience. The Rift S gives developers the Quest’s basic feature set, but without its serious hardware limitations or aggressive focus on hyper-polished, highly marketable experiences.

The rest of the headset just has to be usable, and developers might find upgrading their PCs simply annoying and unnecessary. And eventually, as computing technology improves, Rift games could trickle down to a slightly upgraded Quest or other consumer headset. That would explain elements like the fifth camera — even if consumers wouldn’t notice much difference, developers could experiment with a potential future upgrade.

That would also, sadly, explain why the Rift S looks so bland. The headset is manufactured by Lenovo, and it imports elements of the Lenovo Mirage Solo, as well as the Sony PlayStation VR. (Lenovo actually licensed some PSVR design patents last year.) It’s been optimized for comfort: where the original Rift used three plastic head straps, the Rift S has a halo-style ring that rests around the top of your head and tightens with a wheel at the back. The Rift S weighs more than the original Rift, in part because of its new tracking cameras. This halo helps distribute that weight around your head — I’ve found it more comfortable than the Oculus Quest, which uses the old Oculus Rift design.

Even here, though, Oculus has added a trade-off that’s making some fans mad. It removed the manual slider that let you adjust the distance between lenses, opting for a software tweak that’s supposed to replicate the process. Once again, this isn’t something that bothered me; the Rift S seemed to work fine right out of the box. But people with dramatically wider or narrower pupillary distances might have a different experience. On the bright side, a new button lets you slide the headset’s screen forward or backward, just like the PlayStation VR — which could make the Rift S easier to use with glasses.

It looks like an anxious robot with a giant forehead

Oculus put huge amounts of work into the original Rift’s industrial design, creating a headset that was distinctive and almost elegant. The Rift S seems purely utilitarian — it looks like a clunky, anxious robot with a giant forehead. If consumers aren’t its primary market, though, that decision makes perfect sense.

According to some rumors, Oculus scrapped a more ambitious and high-end Rift successor to release the Rift S. Where the Rift was once truly a gold standard for much of the VR industry, Oculus is now lagging behind several other headsets in areas like screen resolution.

This might only be temporary. Oculus’ parent company Facebook is constantly working on new VR and AR systems, and by keeping the Rift S updates minor, it can supposedly put more resources toward building the next big thing. But right now, Oculus has delivered one major improvement and several debatably helpful trade-offs — and if you want to play its biggest blockbuster games, you’ll have to accept them.

F8 2019: all the announcements from Facebook’s developer conference