The Acer Predator Triton 500 is a good mix of power, portability, and price

Share All sharing options for: The RTX 2060 is the sweet spot for price and performance in gaming laptops right now

Buying a new laptop equipped with Nvidia’s RTX latest graphics cards can be challenging if you’re trying to stick to a reasonable budget. As we found out with the RTX 2080 Max Q and the $2,999 MSI GS75, gaming laptops equipped with the new cards are considerably more expensive than laptops with the last generation cards were.

Fortunately, thanks to the wide spread of RTX configurations that Nvidia is offering, it is possible to get the new platform’s features without buying the top-spec options. The RTX 2060 GPU is both the lowest ranking GPU and least expensive in Nvidia’s lineup, yet it has many of the same capabilities that improve graphics quality, such as ray tracing (DXR) and deep learning super-sampling (DLSS). Compared to its four counterparts — the RTX 2070, 2080, and their Max Q variants — the lower priced RTX 2060 is best positioned to be an affordable solution.

To see how the mobile 2060 compares to the more expensive options, I’ve been using Acer’s Predator Triton 500. It’s a relatively lightweight gaming laptop that retails for $1,799.99, which is considerably less than the other RTX laptops I’ve tested. It comes with promising specs and a design I’ve grown fond of. But what really stands out about the Predator Triton 500 is its performance per dollar.

Our review of Acer Predator Triton 500 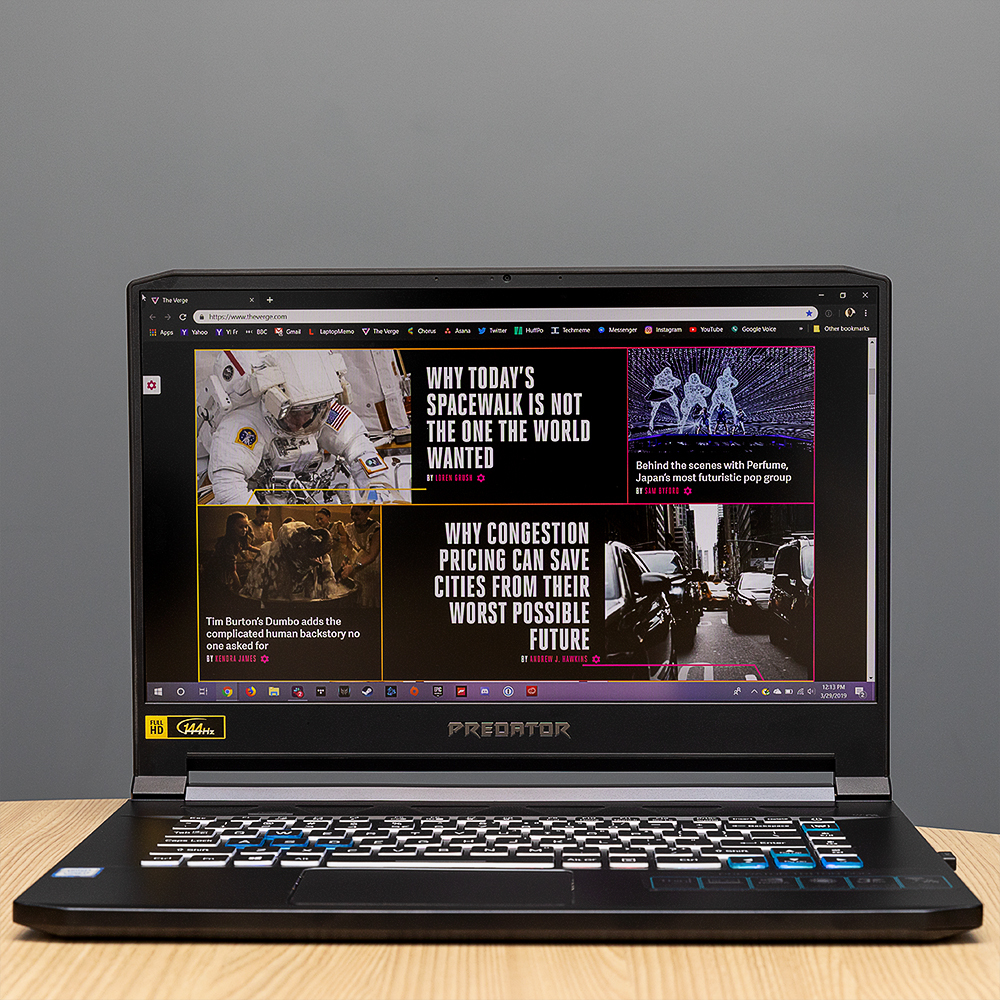 The point is, even if this Acer’s RTX 2060 graphics card doesn’t have quite enough power to push games to the display’s native 144Hz refresh rate, it provides enough performance to deliver a rich experience in those games. Compared to the RTX 2080 Max Q, the RTX 2060 is usually 30 to 40 fps slower, but it can still maintain at least 60 fps or more in demanding games.

Another first-person shooter, Call of Duty: Black Ops IV, ran at a steady 83 fps with its graphics settings maxed out as well. While playing Sekiro: Shadows Die Twice maxed out isn’t the most graphically intense benchmark out there, it performs steadily at 60 fps, which is the frame rate limit of the game.

Like virtually every other gaming laptop, the Triton 500’s fans always kick on while gaming, but what I didn’t expect is that that they could be heard by everyone within earshot of my desk. The searing heat coming off the sides (near the fan vents) and near the top of the keyboard is noticeable, as is the underside. I would not recommend using the Triton 500 on your lap for long periods of time, as the heat can get uncomfortable.

Thankfully, you can manually control fan speeds (and mitigate some of that heat) using PredatorSense, a preloaded Windows 10 app that lets you enable performance features, such as enhanced cooling (Acer calls it “CoolBoost”) and GPU overclocking. The boosted fan mode creates even more noise than “Auto” or “Max” modes so I avoid using it; GPU overclocking is a different story.

“Loud and powerful” sums up the Triton 500

The Acer has a trick up its sleeve in the form of a very prominent “Turbo” button on the upper left margin of the keyboard. Pressing it boosts the RTX 2060’s core clock speed from 960MHz to 1060MHz — a 100MHz overclock — which is something you can set in the PredatorSense app, too. Doing so results in a real-world performance boost of around 10 to 15 fps in the games that I tested. A caveat of using this feature is that you’ll be forcing the fans to run at high speeds, creating enough noise that you’d still be able to hear them even while wearing headphones. Ultimately, I’d say only use Turbo mode if you’re not getting the performance numbers you want, or if the sound of spinning aeroblades isn’t bothersome.

As a productivity machine, the Triton 500’s has been satisfying to use. Our unit’s configuration weighs 4.41 pounds and doesn’t weigh my backpack down too much during commutes. The low-profile keyboard works well, has comfortable key travel at 1.6mm, comes with keycaps that are larger than you’ll find on a Razer Blade, and features three-zone RGB backlighting that you can make use of in a dimly lit room. There are also dedicated hardware control keys on the right side that I really appreciate. Volume, playback, power, and “PredatorSense” are all easily distinguishable and best of all, don’t interfere with other keys in the Triton 500’s keyboard layout. I wouldn’t be able to stand another laptop with an unusually placed key.

Windows Hello is missing from another $1,000-plus laptop

Interestingly, Acer includes anti-ghosting tech — which allows you to rapidly press the same key without “losing” the input — but for only 18 keys out of the whole keyboard. (The Q, W, E, A, S, D, Z, X, C, V, Left-Shift, Left-CTRL, Left-ALT, space, and four arrow keys support anti-ghosting.) I’m not sure whether Acer is trying to be cost-effective by not including the feature for all of the keys, like the “R” key, for example, which is frequently used in PC gaming as an “ultimate” move or a reload button.

Moving away from the keyboard to the touchpad, I’m happy to say it uses Windows Precision drivers, works smoothly, and is reliable to use. It might be a bit on the small side, but gestures and multitouch actions work well and without any issues. If you’re going to be serious about playing games, you’ll need an external mouse anyway.

While the keyboard and touchpad situation is great, the speakers are another story. They’re tinny, lack the sort of bass that would give the speakers presence in a room, and perform worse at higher volumes. Playing a game with the fans on full blast means you won’t even hear the speakers over the cacophony of the cooling system. If you plan on gaming, watching movies, or listening to music on the Triton 500, just use headphones instead.

The Predator Triton 500’s battery life while browsing the web (using Chrome exclusively) isn’t great, clocking in at four hours and 15 minutes. While this is the norm for most lightweight gaming laptops, I was hoping the Triton 500’s energy-conscious graphics would make some sort of a difference. With the display set to 50 percent brightness, no Bluetooth, the “Better Battery” power plan enabled, and overclocking set to off, I could never reach the five-hour mark.

It’s a great value if you can ignore the fans

The Triton 500 has a few annoyances that I wish it didn’t have, but none of them are bad enough to be deal-breakers. The webcam is particularly awful, there’s no Windows Hello login support, all of the ports are toward the middle of the computer instead of more conveniently positioned toward the back, and, worst of all, there’s an obnoxious racecar boot-up sound effect that plays when you turn the system on, which I haven’t figured out how to disable.

Based on my experience with the Triton 500, it appears that the RTX 2060 is the sweet spot for performance and value for this graphics generation. Its gaming performance holds up to the higher-end mobile RTX cards at a significantly lower cost while also staying energy conscious, making it suitable for OEMs to use in thinner, lightweight machines, like the Triton 500.

If you’re looking at the new field of RTX laptops and wincing at the price tags, my suggestion would be to go with the models using the 2060 chip, which still provide top-tier performance and are significantly less expensive than the higher-end configurations.