Fortnite’s island is a virtual world layered with history

As season 9 moves to the future, I can’t stop thinking about the past

Share All sharing options for: Fortnite’s island is a virtual world layered with history

If you were to drop onto Fortnite’s island right now, for the very first time, you’d probably be very confused. There is a lot going on. In the southwest you’ll find an arctic area, complete with an ancient castle still partly buried in the snow. A little ways north is a futuristic cityscape, which sits just below the remains of a lake that is now home to an alien vault. Spend a bit more time exploring and you’ll find a dormant volcano turned into a power plant, a pirate ship sitting in a picturesque lagoon, an ancient city nestled inside a dense jungle, and floating platforms hovering high in the air.

It’s a mess of inspirations and ideas, with seemingly no central theme holding it all together. But that’s also what makes it work. Since Epic’s battle royale map launched in 2017, it’s been subject to massive, world-changing events and nine new seasons of content. With each change, each little addition, the island grows more dense and layered. It becomes more real. A new player might see something confusing and chaotic, but I see a virtual world rich with its own history.

To get a sense of just how much has changed, take a look at the slider below, which compares Fortnite’s island from its big 2.0 update in November 2017 with the latest version from the launch of season 9 this week. 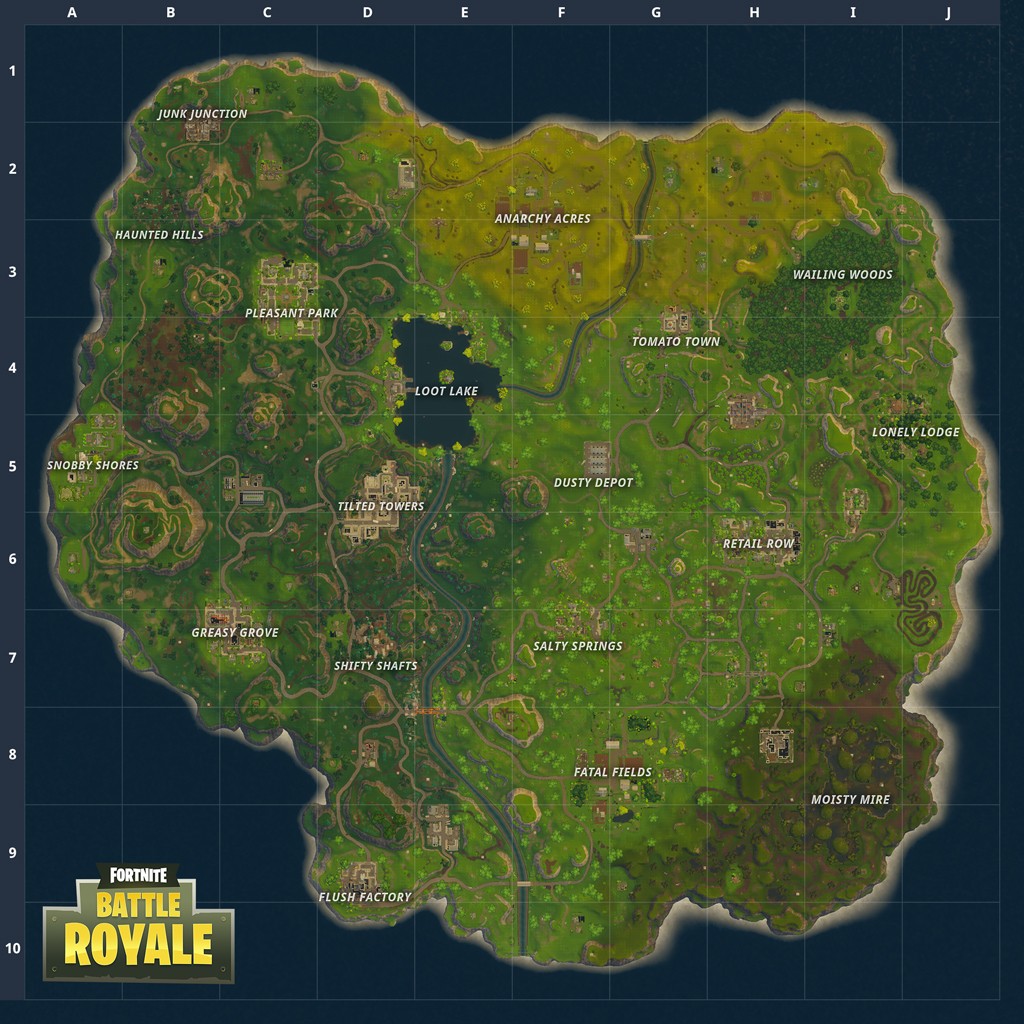 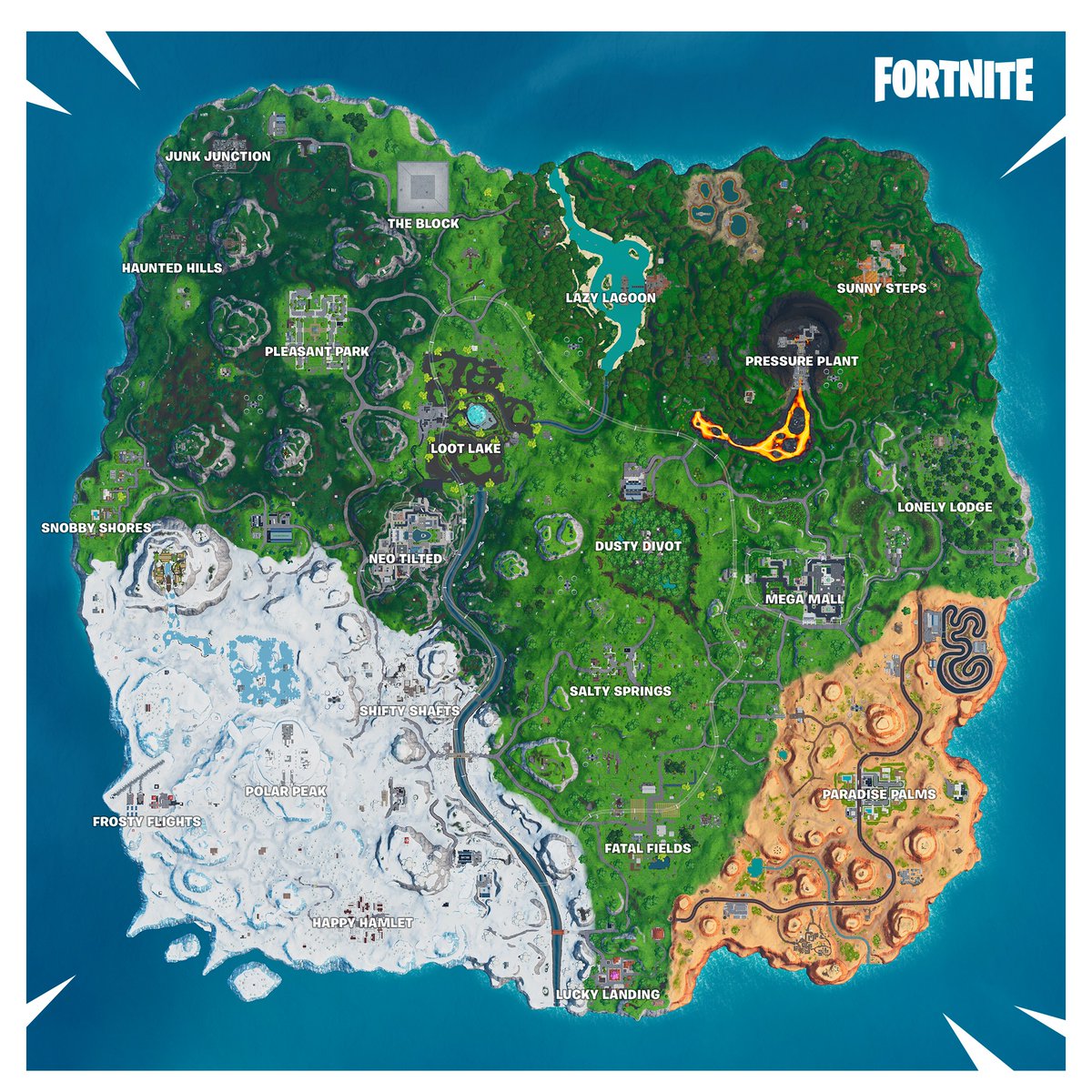 That green map is barely recognizable today. Even the locations that remain from the older version of the island have changed. Loot Lake was once a simple body of water, but now it’s home to all manner of mysterious facilities, while Shifty Shafts and its intricate tunnel system are now mostly blanketed in snow. Other locations are gone altogether. Moisty Mire experienced a drought and turned into a desert, while Tilted Towers was completely destroyed and rebuilt as a cyberpunk metropolis after the volcano erupted.

These changes have, for the most part, been gradual. With each new season comes a new theme. In season 7, an iceberg crashed into the island creating the arctic region, while last season’s pirate theme meant the addition of a lagoon, jungle, and volcano. Large-scale, in-game events similarly impacted the island. There are still fissures in the ground from February’s earthquakes, and large craters, now covered in grass, from when undead creatures swarmed. If you look up at the sky, you can still see the crack from the rocket launch.

There are various reasons for these changes. Some are related to gameplay; Loot Lake was always a slog to get through in its original incarnation, which is likely why it’s seen such dramatic changes. Other updates, like the frozen castle, are part of Fortnite’s unique brand of storytelling. Some involve the community: when developer Epic wanted to see which classic item players wanted to bring back to the game, it engineered a lengthy mystery centered on the unearthed alien vault.

But whatever the reason, each of these changes has become a part of Fortnite’s history. Of course, Fortnite isn’t the only game to receive regular updates and new features. (Though it does update at an incredibly fast rate — which is extremely problematic for those people building the game.) What makes Fortnite unique is that you don’t just see these changes in patch notes released by the developer. They’re a key part of the world itself, and you see them every time you venture through the island.

It’s impossible to pinpoint the exact reason Fortnite has become such a phenomenon. It’s likely a combination of accessibility, design, timing, and presentation. But whatever it is, Fortnite’s island has become a virtual place where tens of millions of people hang out every day. With each new layer of history that’s added, it feels that much more real. Sure, it’s a ridiculous place with holographic burger signs and banana suits and a wind tunnel transportation system. But when you spend enough time in it, the island becomes an incredibly familiar place, and one with a shared history among the game’s community.

In the same way that I think of the sadly closed French restaurant that used to exist where my favorite coffee place is now, I can’t help but remember things that happened in Fortnite when I play battle royale. And given the rapid pace of change in the game, my mind lingers on the past as much as it questions what will happen in the future.

Fortnite: everything you need to know about the world’s biggest game