It’ll have you looking for trouble

Just one look at the Tesoro Neo X Speed from Cannondale and you know it’s not your typical pedal-assisted electric bike. Its aggressively styled alloy frame and thick wheels are too brutish for a commuter bike, yet the fenders, rear carrier, integrated lighting, and kickstand look out of place when bombing down a mountain trail.

According to Cannondale, the Tesoro Neo X Speed is a hybrid designed for “backroad bikepacking” and “hooning around the city having a laugh.”

In other words, this is an e-bike for nature-loving hooligans. 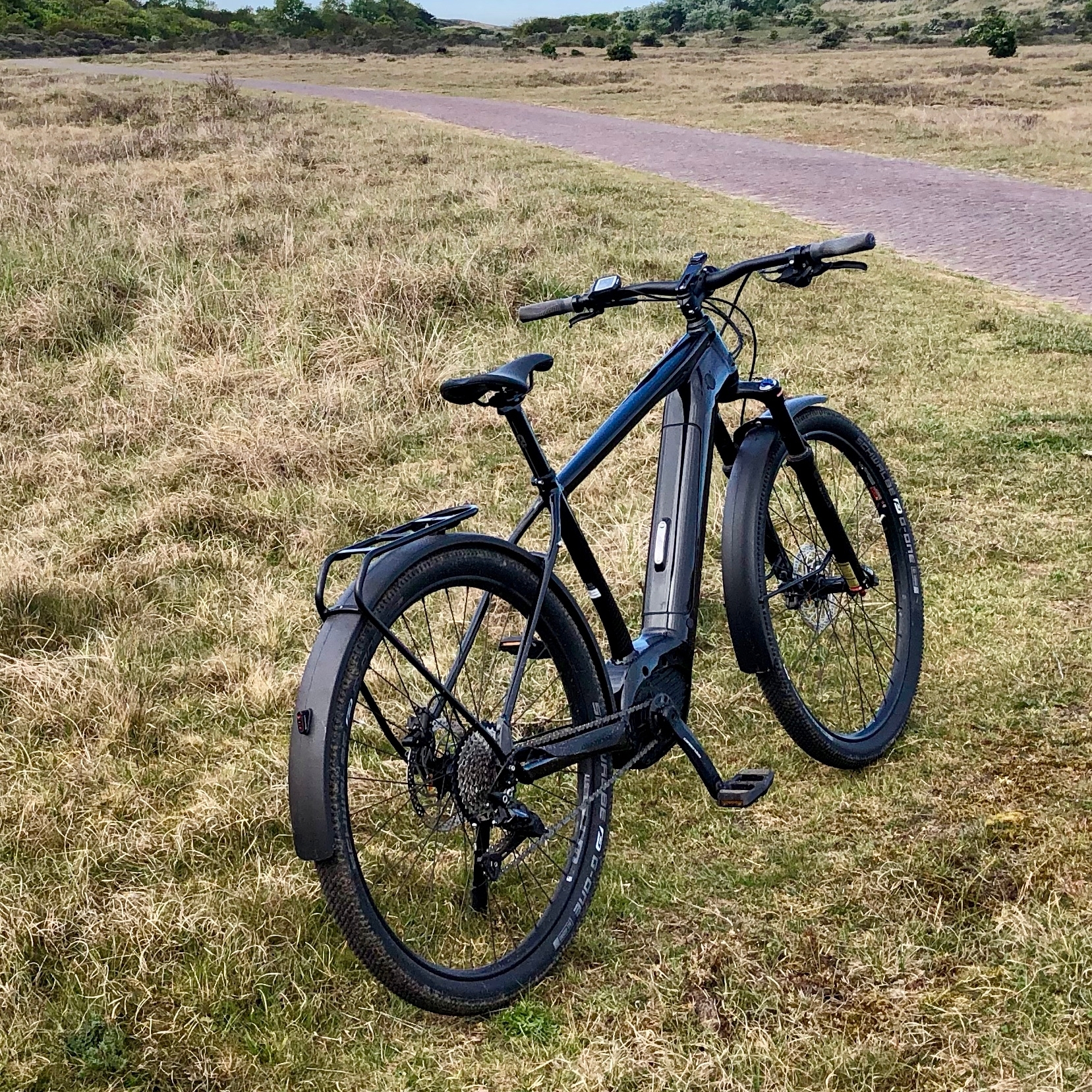 I’ve had the $4,200 electric bike for a few weeks where I’ve tested it as both a regular city bike and an off-roader through the North Sea dunes. It’s designed for trekking (aka, touring) after all, with some shops like REI pitching it as a daily office commuter. That was a claim I had to test for myself.

Before delving too deeply into the psyche of this troublemaker, let’s talk specs. The Tesoro is powered by a 250W Bosch mid-drive motor that gets its juice from a 500Wh battery located in the downtube. The battery can be removed with a key for easy charging indoors, or it can be charged while still fitted to the bike. A full recharge takes about 4.5 hours.

As hinted at by that relatively small motor, the Tesoro is tuned for Europe which limits e-bikes to a max speed of 25 km/h (15.5 mph). That’s not fast, unlike the generous 28 mph (45 km/h) limit set on the Tesoro for the US. Still, it’s fast enough for Amsterdam’s thick multimodal commuter traffic while tempering my desire to ride like an asshole.

The power provided to the pedals can be dialed up in stages from the drive display mounted on the handlebar. It’ll eke out about 70km (43 miles) depending how you ride. You can quickly thumb through Eco, Touring, Mountain biking, and Turbo modes while riding, with each adjusting the power delivery and torque to the displayed activity. You also turn the motor off and still get around thanks to the 10-speed Shimano Deore shifter package without any noticeable drag caused by the motor. The bike’s hydraulic disc brakes are there to ensure a confident stop. 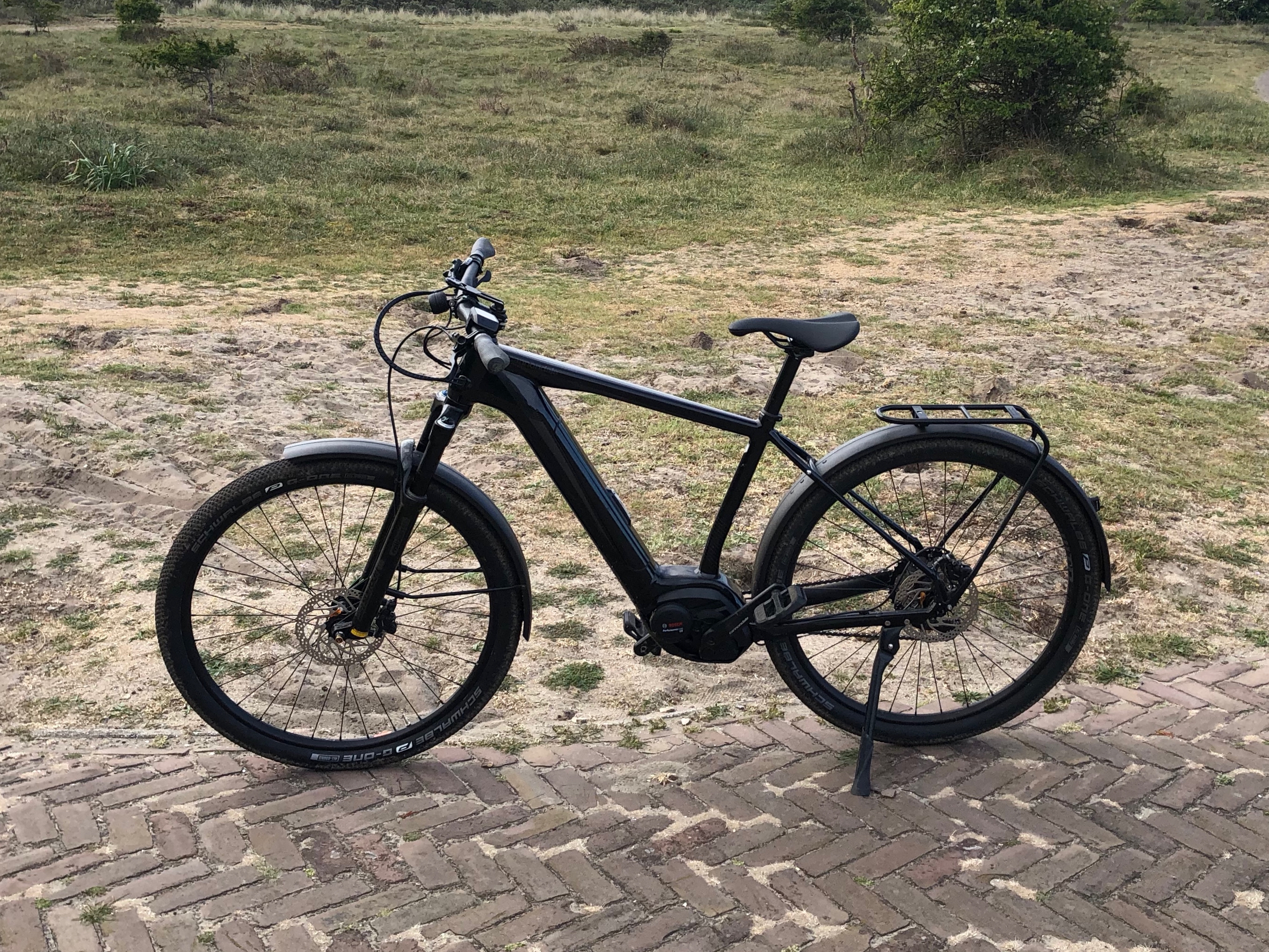 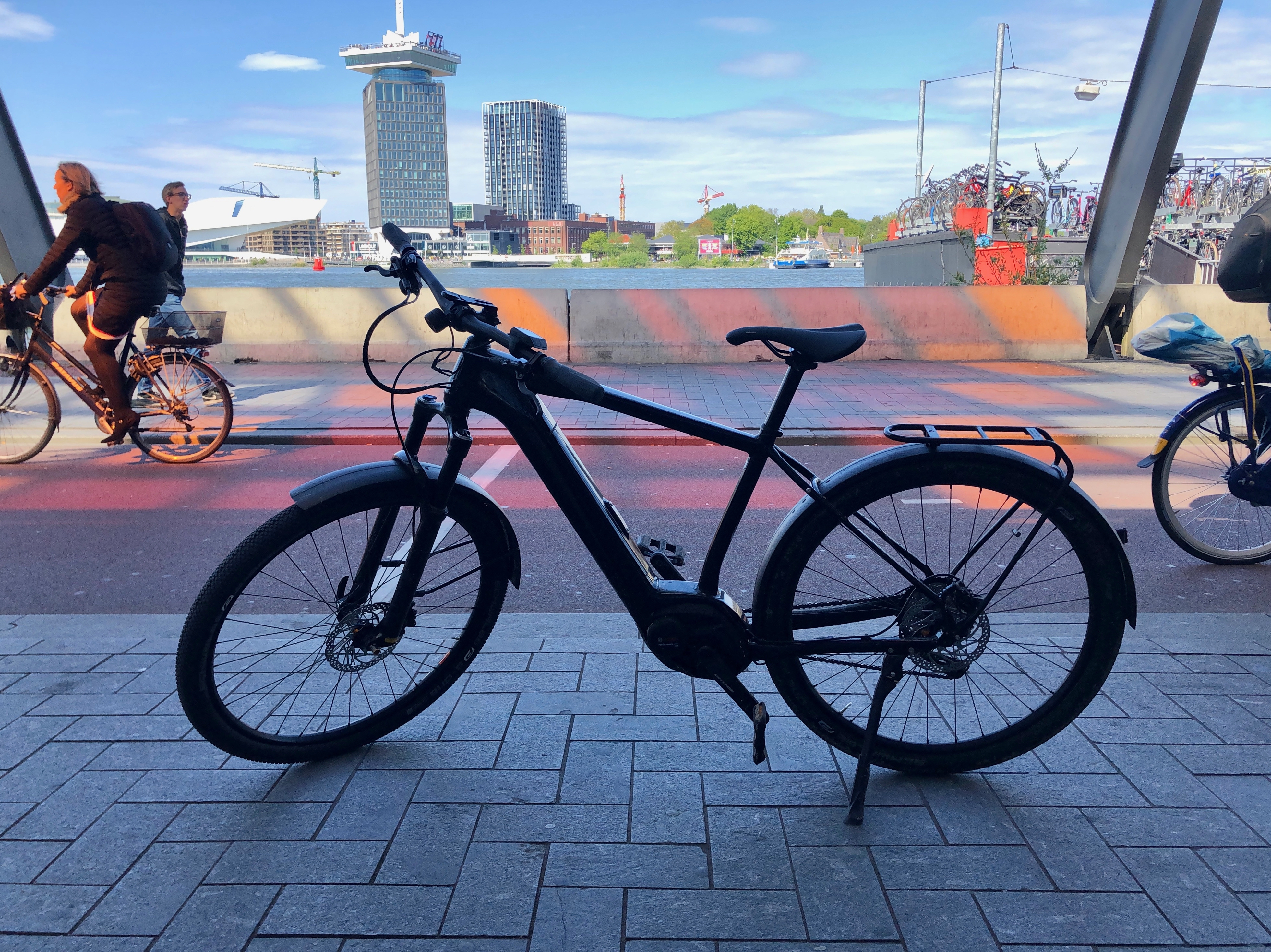 Can one bike do it all?

The Tesoro Neo X Speed is fitted with 29-inch by 2.35-inch multisurface tires. The knobbed Schwalbes are surprisingly quiet on city roads while offering decent grip on trails — but not as much as you’d get from proper mountain bike tires. The wheels are, unfortunately, too wide to fit into many Dutch bike racks designed for regular commuter wheels.

The low flat handlebar design gives you good control on the trails, but puts you in a forward position that can be tiring on long commutes to the office. They’re also very wide which prevents the bike from fitting through narrow European doors and interferes with other bikes when parked side by side on the dense sidewalks.

My fully equipped Tesoro tips the scales at 52 pounds

The optional Cannondale fenders, integrated lighting, bike rack, and kickstand fitted to my test bike are much-needed accessories for the city, but weigh down the bike considerably while stunting on single-tracks. My fully equipped Tesoro tips the scales at 52 pounds (23.6kg), yet it still lacks a bell and chain guard, betraying a lack of true commuter cred.

Actually riding the Tesoro through the city is fine. The noise of the studded tires and Bosch motor do combine to form a steady whir of sound. Bosch calls the motor “silent,” but it’s most definitely not — it is quiet, but nearby riders will know you’re “cheating.”

As a city bike, I don’t feel comfortable leaving the Tesoro locked to a bicycle rack — when it fits — overnight as is the norm in bike-obsessed cities like Amsterdam. The bike stands out too much, making the risk of theft too great. Even simple trips to the store are stressful due to risks presented by the quick-release front wheel and the non-removable (but steal-able) bike computer.

I’m a casual trail rider, who prefers long treks along winding paths of dirt, rather than someone who enjoys extreme technical riding. During my trial testing with the Tesoro, I found it very easy to accelerate past the 25 km/h cap on the pedal-assist, leaving me envious of the faster US model. But boy was that pedal-assist useful as soon as I hit my first steep incline, or when climbing out of deep ruts and ditches. The Bosch motor let me maintain a quicker overall pace than I would have on an ordinary mountain bike. Overall, the bike was quick and responsive off-road, with a front suspension you can tweak while riding to help tame unruly surfaces.

I did manage to puncture the front tire — twice. Pushing the 50-pound bike five kilometers back to civilization made me wish my review bike was fitted with Cannondale’s tubeless option.

Testing the Tesoro in such a binary fashion — as either a city commuter or mountain bike — isn’t really fair. It’s trying to force the Tesoro to be something it’s not. Designed for trekking, the Tesoro Neo X Speed is not the best commuter bike you can buy, nor is it the best mountain bike. It’s something in between, doing exactly what it says it will and with smiles galore. It’s the kind of bike that’s begging to be ridden on long treks through idyllic countrysides before pulling up next to a bog to camp, and then making a run to the local town center for a charge and supplies.

In the city, this e-bike goads its rider into searching for trouble. It made me want to jump curbs and ram the front shock absorber into potholes just for the fun of it. On trails, it made me want to explore the magnificent dunes of the Dutch coastline more deeply, and for longer, than ever before.

Cannondale sells e-bikes designed just for mountain bikers and commuters. It also makes the Quick Neo EQ hybrid e-bike that shares the styling of the Tesoro, only without any illusion of being an off-roader.

The Tesoro Neo X is a bike that encourages you to take the road less traveled. If your commute to work already involves both pavement and paths, then count yourself lucky. Not only are you winning at life, but Cannondale has the perfect e-bike for you.