If I’m being honest, the phrase “Honeycomb Glacier” makes me think of a frosty dessert with a crunchy bee-produced treat on top, not a concept gaming PC.

But standing in a semi-secret lab deep inside Intel’s Santa Clara headquarters, I can’t help but think it’s the most convincing argument ever made for a beefy laptop with two screens.

You may know that chipmakers like Intel don’t just produce processors — they spend big bucks building new markets for those chips by figuring out what people want in their next computer and working with PC manufacturers to make those new features a reality. Sometimes, they build entire example PCs for the industry to crib, like we saw firsthand when Intel’s dual-screen Tiger Rapids prototype became the Lenovo Yoga Book C930 last year.

For 2019, Intel’s building something a little beefier than that tiny notebook of a PC. Intel’s Honeycomb Glacier is an attempt to bring two screens to the gaming audience — a 15.6-inch 1080p primary panel and a 12.3-inch 1920 x 720 secondary screen — in a way that complements, instead of distracting from, their games.

At least twice in the past decade, Intel has realized that secondary screens are an opportunity. It famously partnered with Razer to build the original Switchblade prototype that stole the show at CES 2011, as well as the first Razer Blade laptop that fit an entire screen into the touchpad for the machine.

But where practically every laptop with a secondary screen has required you to hunch over your keyboard — even the flashy new Asus ZenBook Pro Duo and HP Omen X 2S that were just announced at Computex — the Honeycomb Glacier lifts both its screens up into the air using a unique double hinge.

Intel is so proud of this hinge that it wouldn’t let us take pictures or video or the internal mechanism, but it works like this: When you lift the screen, it’ll automatically stay propped up to any angle of your choice thanks to a mechanical one-way roller clutch, and you press a little black button on the left side to disengage that clutch when you want to fold it down.

At the same time, Intel takes advantage of the extra real estate underneath the hinge to fit a purpose-built cooling mechanism that draws enough additional air across the specially shaped and laid-out motherboard to cool up to 195 watts worth of components using a single fan. That’s enough headroom to potentially fit some of the most powerful gaming laptop parts in a relatively thin chassis. While this prototype is only rocking a 45-watt 8-core Intel CPU and Nvidia GeForce 1060 graphics right now because that’s what Intel had lying around, even those chips are currently overclocked to 60 watts and 95 watts respectively.

And since that second hinge is going to be near eye level, Intel also added a Tobii eye-tracking camera that could tie the whole package together. Where Tobii is often seen as a gimmick to control the odd game or used by e-sports players to track their gaze during a match (and potentially learn from their mistakes), here the eye-tracking cameras can let you instantly flick your focus to the laptop’s secondary screen, so you can theoretically engage your Twitch audience, chat with your friends on Discord or even your co-workers on Slack without alt-tabbing away from your game. Mind you, the software feels super early and has a couple bugs, but being able to simply look at a chat window and instantly start typing feels like the future.

Honestly, “super early” is a bit of a theme with the Honeycomb Glacier. Not only is it a prototype, it’s prototype that uses off the shelf components, including a secondary screen sourced from the automotive world — since Intel couldn’t justify sourcing a custom screen for a computer that might never exist. Intel’s engineers freely admit to me that they themselves aren’t fans of the buttonless trackpad or the big bezels around that secondary screen, and they don’t seem surprised when I have trouble dragging an Adobe Premiere timeline around on the secondary screen, or when I run into some stuttering and glitches. 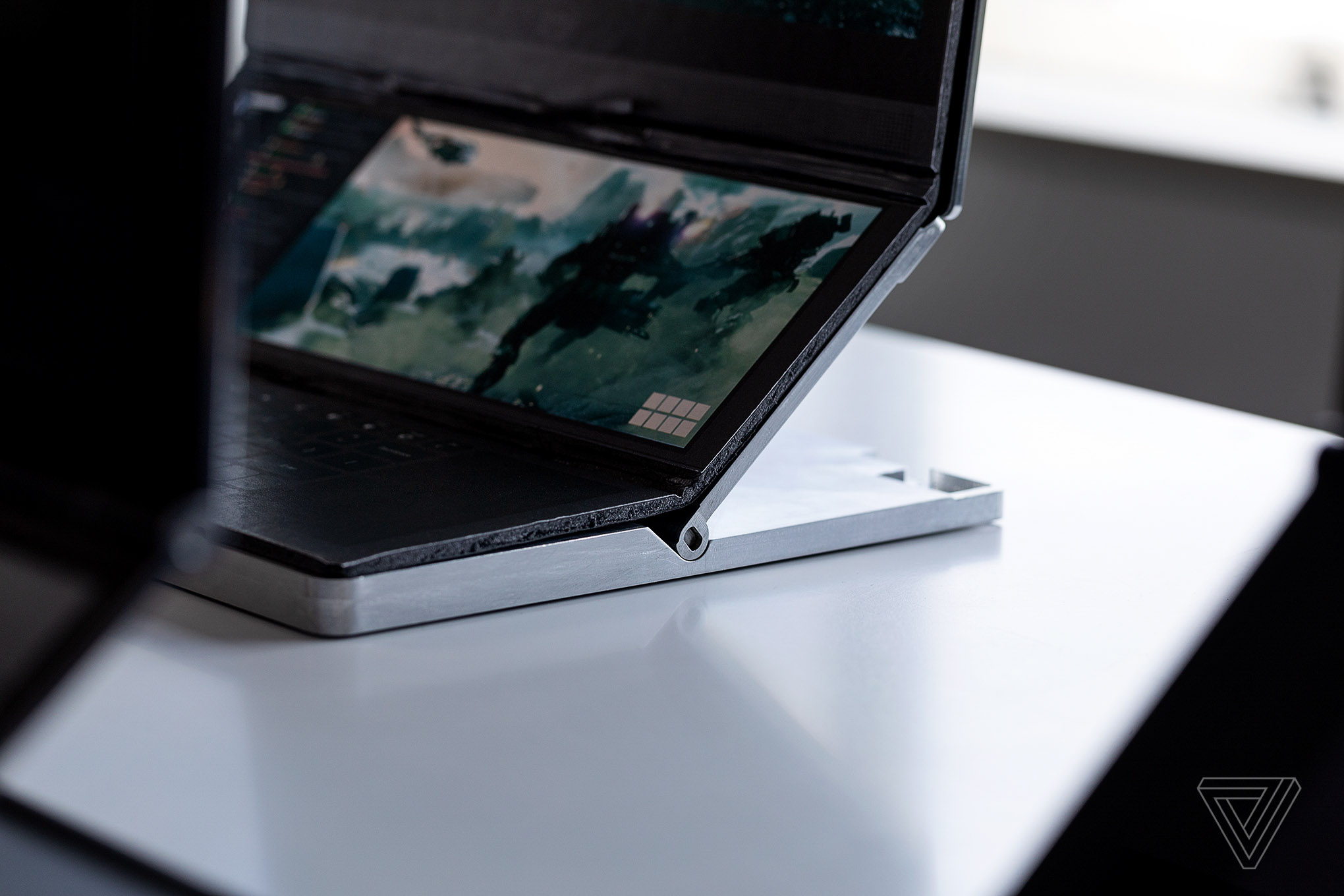 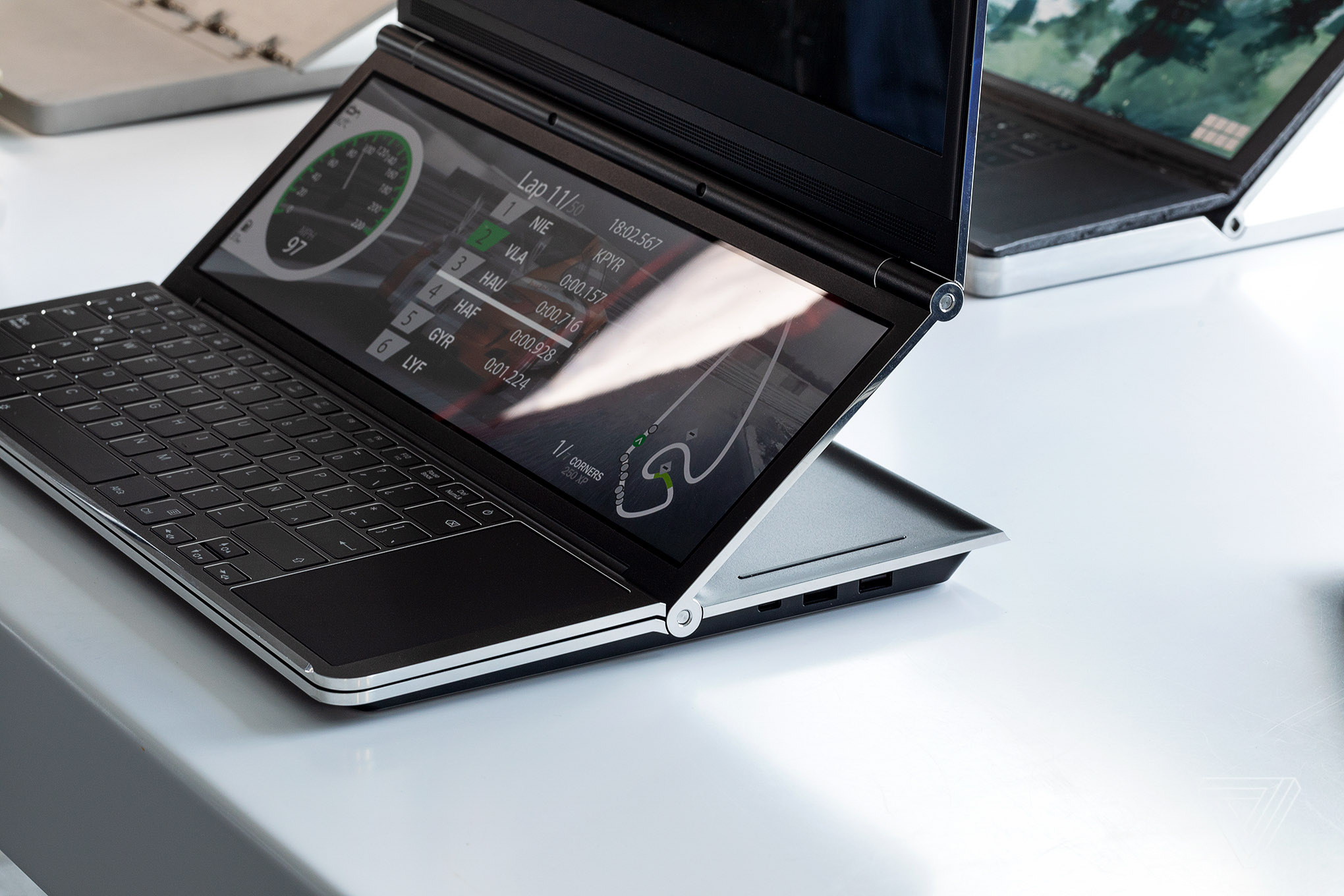 But right next to my working Honeycomb Glacier prototype is a far sleeker, non-functional model that represents what the device could actually look like if a manufacturer decided to make it for real.

This is the rare prototype PC that feels like more than the sum of its parts, where almost all the pieces feel necessary to build dual-screen laptops that actually make sense. And when I ask Intel’s PC innovation leaders that whether it’s also one that will actually make it out of the labs, they have an optimistic answer. While they admit it’s quite possible that manufacturers will just carve out pieces of the design, as Asus already did with the ZenBook Pro Duo, they say they haven’t built a prototype that’s been this desirable, generated this much interest from PC manufacturers in years.

It wouldn’t be the first time: Intel’s Murali Veeramoney says that when Intel came up with the Ultrabook, one of the first such laptops was effectively entirely designed by his team — a PC manufacturer saw the value and jumped at the idea.

We’ll have to wait and see.