Yes, it just comes with a fancy monitor arm

Big monitors are great for many obvious reasons. They let you spread your digital workspace out across a larger area and magnify details to make them easier to see at a comfortable distance. Curved ultra-wide monitors provide an immersive experience by surrounding you with a screen. Once you’ve spent any amount of time working on a large screen, it’s hard to go back to smaller ones.

But big monitors require big desks, and they tend to dominate whatever surface you put them on. If you like to use your desk for other activities, a big monitor can leave little room for them.

Samsung’s $499 32-inch Space Monitor solves this big monitor problem in an effective way: instead of using a standard monitor stand that sits on top of your desk, it comes with an arm that clamps on the back of your desk so the screen can be pushed out of the way when you don’t want to use it.

Our review of Samsung Space Monitor 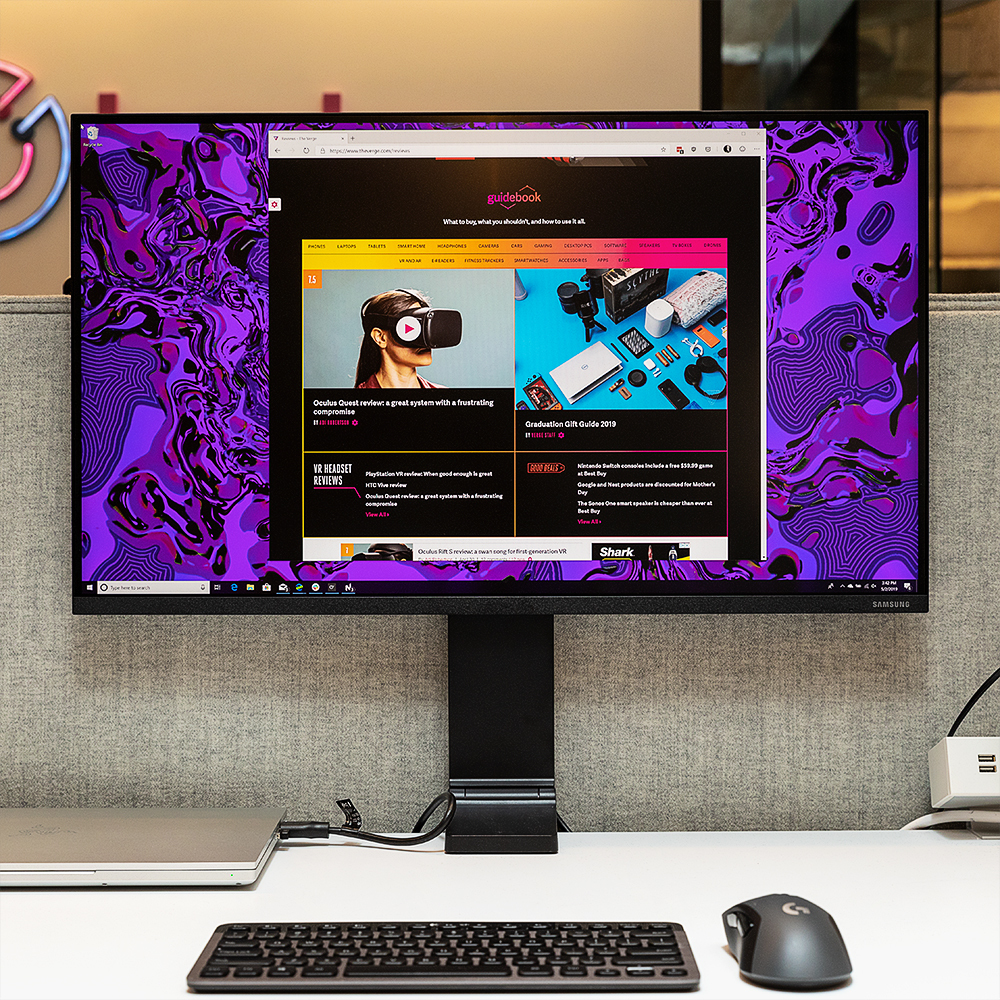 Sure, you could buy a monitor arm for any other display so you can push it out of the way — Amazon has countless options, and there’s a standard screw layout to mount them to your own screen — but the Space Monitor’s arm uniquely integrates into the display to hide behind the panel in its most upright position, allowing you to maximize how far it’s pushed back on your desk. Samsung claims this design allows for 40 percent more usable desk space than a standard monitor stand for the same size display. It can actually sit flat against a wall, which isn’t an option for the vast majority of articulating arms you can buy.

The included arm has channels for cable routing, and the display comes with a unique combined HDMI and power cable to further reduce cable clutter. The arm does have its limitations: it cannot rotate the display, it cannot swivel the screen, and it doesn’t use the standard VESA mounting system, so you can’t change the monitor out if you want something different.

As for the display itself, it’s a 32-inch 4K screen with slim bezels along the top and sides. It’s a VA panel, which isn’t as nice as IPS (to say nothing of OLED) for off-axis viewing, and it has an average brightness of 250 nits, which is fine for an office setting but won’t win any awards. Testing the screen with a Spyder 5 Pro display calibrator showed the screen covers 100 percent of the SRGB spectrum and 83 percent of Adobe RGB. A 4ms response time and 60Hz refresh rate mean this screen won’t be ideal for gaming, but it’s fine for productivity and design work.

Out of the box, the display was horribly calibrated, with washed-out colors and a severe lack of contrast. After using the Spyder 5 Pro to calibrate the screen, it’s much better, but the screen itself is decidedly average. You’re really paying for the design with this monitor, not the quality of the screen.

The display also, bafflingly, lacks any USB-C connections. Instead, it relies solely on a single HDMI and single Mini DisplayPort. That makes it hard to use with modern laptops, such as a MacBook Pro, which will require a dongle adapter to plug in. There are also no speakers, which means you’ll need to use headphones or an external set of speakers (which will cut into some of the space-saving on your desk) for any sound.

One thing that would really make the Space Monitor sing would be touch support since the arm allows you to pull the screen all the way down to your desk in easy reach of your fingers for touch control. Unfortunately, that’s not an option here.

Despite those drawbacks, I do really like using the Space Monitor at my desk. It lets me easily adjust its position and push it completely out of the way when I want to do work that doesn’t involve staring at a giant screen. I could accomplish something similar with a different monitor and a third-party arm and have some greater degrees of flexibility, but I do appreciate the integrated feel that Samsung achieved with this design.

And instead of charging an extra arm and a leg for it, Samsung put it in the box.