And an equally unique back story

Share All sharing options for: The Friends of Ringo Ishikawa is a free-form 2D brawler with a unique sense of melancholy

The Friends of Ringo Ishikawa is a game that wears its influences on its sleeve, yet manages to feel altogether exceptional. At first glance, it appears to be a simple, side-scrolling beat-em-up in thrall to River City Ransom, but it blends life-sim elements from games like Persona and Shenmue with punchy combat and excellent, world-weary writing that you wouldn’t expect from a pixel-art tale about delinquent school kids.

I played a lot of The Friends of Ringo Ishikawa on a recent vacation and couldn’t get it out of my head, so I got in touch with its developer, which turned out to be just one guy from Moscow who goes by the name Yeo. As it happens, the story behind the game is as unusual as the game itself. It’s not every day that you come across a solo Russian developer who enlists his dad to help realize an uncompromising, authentic vision.

One of the first things that struck me about The Friends of Ringo Ishikawa was how real its depiction of small-town Japan feels. The attention to detail is astounding, accurately capturing elements like the intersection between infrastructure and nature or the specific design of 40-year-old apartment buildings. The game uses 16-bit-style pixel art, but every pixel feels like it’s in exactly the right place.

I was surprised to find out, then, that neither Yeo or the background artist he collaborated with have ever been to Japan. “It’s still my dream country to visit,” he says. “Maybe exactly because of really high expectations I haven’t visited it once… I always thought of the USA as my second home because I love American culture, like literature and movies, and was more or less grown up on it. But when I visited it at last I quickly understood that I obviously don’t belong there, that I’m a foreigner. It’s an expected feeling but I never really considered it. So I don’t want to feel this in Japan again, which I most certainly would do.”

Yeo has, however, long had a fascination with Eastern culture. “My father was an early Soviet Kyokushin karateka and he fed me stories of Mas Oyama going into the mountains and fighting with bulls and everything,” he says. “And it was also a boom of kung-fu and ninja films at that time, and we got our new TV and I could watch Sun Wukong cartoons in color at last.”

Yeo’s father Nikolay ended up having a far more direct influence on The Friends of Ringo Ishikawa, the developer says. Yeo tapped an artist called Artem Belov to create the game’s gorgeous backgrounds — “He’s really a pro,” Yeo says — but when it came to animating the fighting action, he needed someone with the time to draw countless character frames. Luckily and implausibly, he happened to know an unemployed 58-year-old man willing to teach himself pixel art in Microsoft Paint. Yeo would send over reference photos of himself performing the moves, and Nikolay would trace the pixels by hand.

In fact, The Friends of Ringo Ishikawa is all about time passing by. There’s a story that progresses with the in-game calendar, but what you do with those days is otherwise entirely up to you. You can go to school and study or read up on Russian literature at the library, or you can skip class to work out at the gym or find rival gangs to beat up for cash. Lose a fight and you’ll wake up in your own bed a while later, health restored but having lost some time you’ll never get back.

Let me be clear: this game is absolutely not for everyone. Its free-form structure won’t appeal to players who want specific goals out of their games, while its refusal to explain anything could come off as obtuse. It’s essentially an open-world game, yet it doesn’t even have a map. But the payoff is that 100 percent of the time you spend with The Friends of Ringo Ishikawa is in service to its incredible sense of mood and place.

Another huge element of that mood is the writing, which feels authentic and personal even though this game was written in Russian and translated to English and set in Japan. “I didn’t even think of Japan too much when I was writing a script and dialogue,” Yeo says. “More or less all characters are based on my school friends and it’s just the style of dialogue I usually write.” Yeo says the English localization, handled by Dmitry Ostrozhskiy, was a direct translation of the Russian, but since he speaks pretty good English he was able to weigh in with opinions here and there.

The game isn’t high literature, exactly, and you’ll run into some typos and grammatical errors from time to time. But its tone is pitched perfectly, lending a real sense of weight and reflection to Ringo Ishikawa as he contemplates his final high school semester with his friends and his future in the world. The dry humor and detached, fatalistic attitude rings true for a game where you can essentially do what you want without serious consequences. 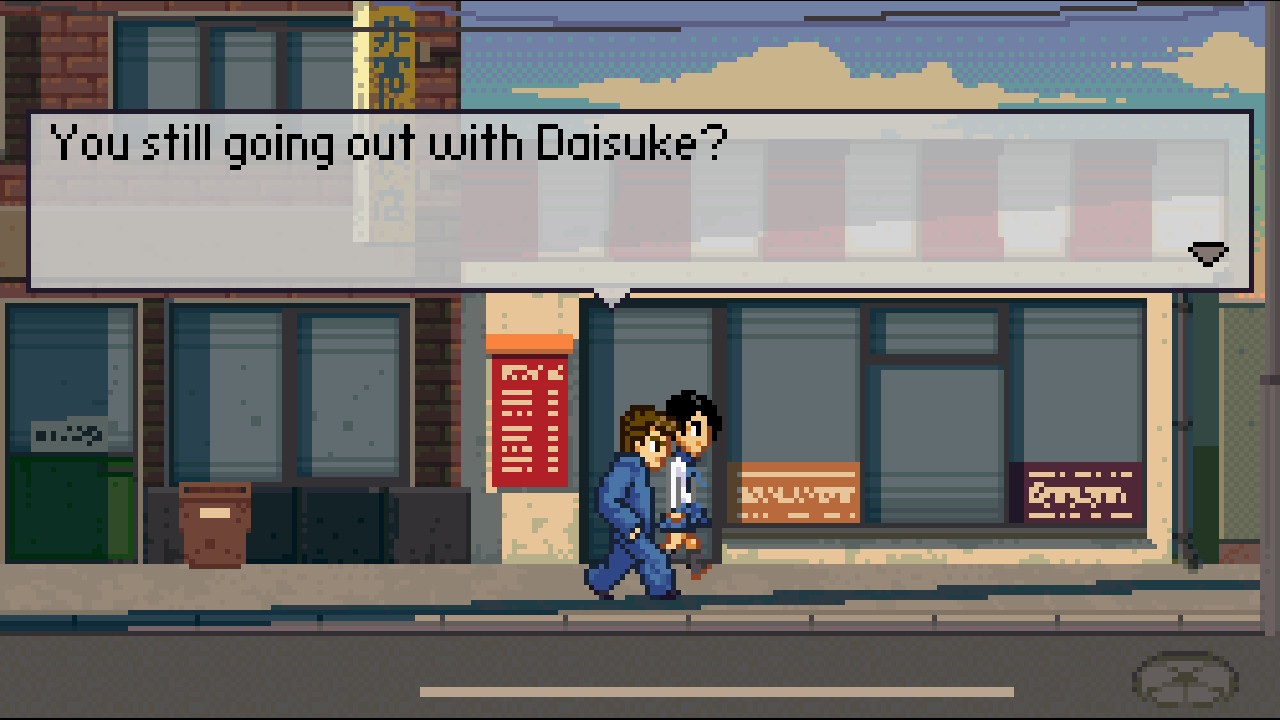 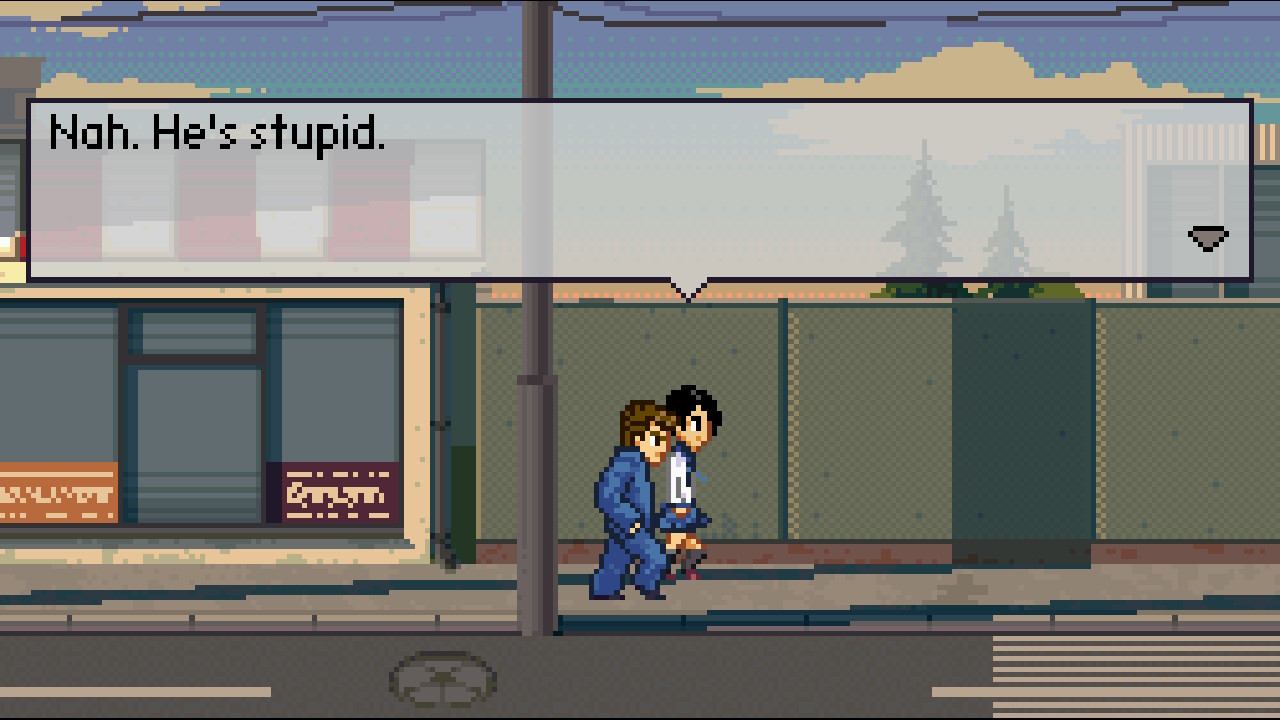 “I’m a pretty melancholic person, so every time I try to write a story it turns out to be a drama in the end,” Yeo says of The Friends of Ringo Ishikawa’s distinctive tenor. “It’s just in my character to make sad stories. When I first made a River City Ransom fan game I made all the backgrounds black and white immediately. And it was some ‘Kunio-kun comes back to a town after 20 years’ kind of story, where young people don’t remember him and he’s broke and not that good anymore and stuff like that. So it’s just me.”

“It’s just in my character to make sad stories.”

Yeo does have some regrets over certain elements of the game that players might not grasp. “I believe it’s the best 2D beat-em-up mechanics out there so I feel good every time somebody points out that he liked the fighting,” he says when I bring up the game’s surprisingly deep combat system, which has influences as diverse as Konami’s Kensei: Sacred Fist and Rockstar’s Bully. “[But] I think that I didn’t explain guarding enough. That’s my mistake. I thought like ‘there’s only three buttons, it’s easy to figure everything out if you want to.’ But I was mistaken.”

“I feel sad when I read that it’s just a River City Ransom rip-off or an ordinary beat-em-up, but that’s my fault also that I hadn’t explained it enough to some players,” he continues. “But I had to choose. I couldn’t explain only fighting and not explain everything else, and not explaining everything else is the essence of the game, so I had to sacrifice fighting to some players. And also I don’t think that many of them would have enjoyed the action more if it were explained better. Some of them just don’t like the mechanics I proposed. That’s a normal thing.”

That is a normal thing. And for me, at least, The Friends of Ringo Ishikawa totally hits the mark. It’s an independent game in the truest and best sense of the word. I can’t remember the last time I played something of this scope with a solo developer displaying such relentless faith in their own vision and the story they want to tell. It’s a remarkable achievement.

Not everyone will agree, but Yeo is fine with that. “I was frightened of course when the game released — how will the players receive it? Will there be any reviews at all?” he says. “And when I received the first deep and meaningful positive review, I felt accomplished. I was like ‘I was right after all, I’m not so alone anymore.’ It was a really deep feeling. It lasted seconds, but even for this moment it was worth it to make the game.”

“And I wasn’t afraid of bad reviews after that. Because a game can’t be loved by anybody, but if somebody loved it, then it’s okay — that means you did it right. I had this feeling every time I read a deep positive review from a player who really got the story and what I was trying to say with the game. And I still feel it when I read something like that.”

The Friends of Ringo Ishikawa is out now on PC and Nintendo Switch.